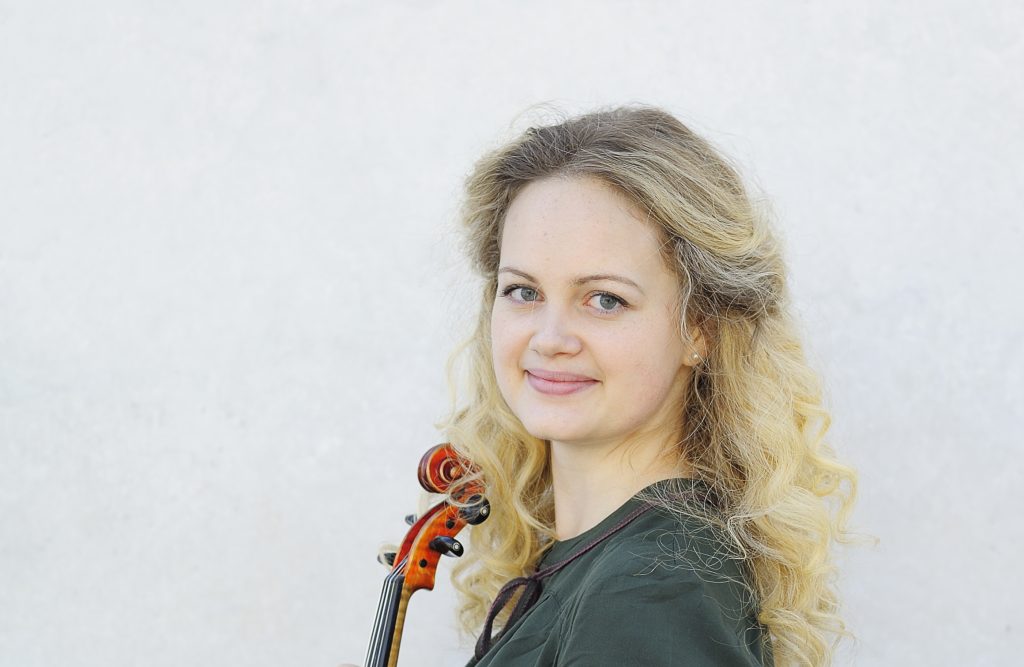 “Indifference is the main scourge of Ukrainians. We often live like machines. But it would be enough for everyone to just put his soul into his work, and it does not matter, whether it’s a saleswoman or a minister in the office, then everything in Ukraine would change very quickly.”

Aleksandra Zaitseva, a 20-year-old student at the Nuremberg University of Music, is sure about this. The answer “Well, what do you expect from an impoverished country!” does not suit the young woman from Kyiv who moved to Germany two years ago, because she does not believe that everything in life depends on money. “Stealing, corruption, criminal negligence – they all result from indifference, a global Ukrainian problem that is hard to overcome,” she explains.

“Where did these wonderful children come from?” – Young Kyiv artists paint Europe

I first saw Aleksandra together with schoolchildren and teachers of Kyiv Art School at a press conference devoted to a school trip to the cities of Western Ukraine, Poland, and Germany. A girl with beautiful curling golden hair quickly overcame her excitement and started talking about the trip she organized. Despite the young age, Aleksandra is competent, confident of her own strengths, believes in the future and shows deep respect for the public and her colleagues. Her story was based on the idea that active people from different countries should cooperate for European integration of Ukraine.

In July 2017, 14 children from Taras Shevchenko State Art School went on a 12-day trip with a varied program. The event was organized by the Ministry of Culture of Bavaria, the Consulate General of Ukraine and the Ukrainian school in Munich. The children were to go on excursions, attend workshops, exhibit their own works and visit the art gallery in Dresden. Kyiv schoolchildren painted in the open air, attracting the attention of local residents and tourists: “Where did these wonderful children come from? Are these really their drawings, or maybe they were drawn by adults? Can we buy them?”

During our conversation after the press briefing, the participants of the trip were eager to share their impressions: “When we just walked along the ancient streets of Krakow and Munich, we could not help but want to sit down and draw!”

“German kids think differently, they do not have such clear-cut rules, they are more active, freer, and braver than we. They can draw a square apple and explain what it means. We have a lot to learn from them.”

“But they also have something to take from us,” says Olha Troitska, head of the group. “The Western school will return to academism one day. And today, it will not be difficult for our children to enter the best art academies in Germany due to their skills and knowledge.”

The children, who are going to apply to Western universities after finishing school in Kyiv, are also sure of this. And what is the way people live there?

“People have a completely different attitude to their country there,” says young artist Yevhenia Zhuruieva, “it’s seen in small things. They do not wave national flags like we do, but their streets are clean and beautiful.  They are very attentive, neat, and they really love their land. “

Parents of young travelers called Aleksandra and thanked her for their inspired children. Aleksandra herself is already thinking about future projects, including how the next group of art school students will visit Paris.

Why did a Ukrainian student, who received such a happy opportunity to study in Germany and not think about anything but her own career, decided to engage in a demanding organization of a children’s trip to Germany? I invited Aleksandra for a cup of tea and asked her to tell me about herself.

“I was born in Kyiv, in a family of musicians,” Aleksandra began her story. “My childhood passed at rehearsals of the orchestra.” That’s why it was not difficult for the girl to get used to the daily work in a music school from the age of six. For her, daily violin lessons were part of her daily routine. When it became clear that Aleksandra has a talent, she was sent to the best music school in Kyiv – Kyiv Specialized Secondary Music boarding school named after M.V. Lysenko.

A bit later she had to leave home and move to the school to find additional hours for rehearsals. From the 7th grade, Aleksandra enrolled in an art school: “These six hours on Sundays were a rest to me. Drawing was very easy to me.”

While the parents were deciding which career, of an artist or a musician, to choose for their talented daughter, the girl dreamed of becoming … a president. She laughs as she remembers the times she was an instigator in her class, a permanent monitor, always organizing something. Aleksandra was seven at the time of the Orange revolution in 2004, but she remembers it well thanks to her parents, who made sandwiches for the demonstrators and worried watching the news on TV. But as to the Revolution of Dignity in 2013/14, the 10th-grade schoolgirl actively participated in it.

“Right before our eyes, not only mine but everyone’s consciousness began to change,” recalls Aleksandra, “Such a love for my country began to appear, such a burning desire to change something for the better!” Three years after the Revolution, I see what a huge step forward Ukraine has made. If Ukrainians knew how much the Diaspora is doing for our country and how much has been done in Ukraine, how many active social movements are created, how many talented Ukrainians are conquering Europe … You need to be aware of this see the real development of civil society and Ukraine as a whole. “

In 2015, Aleksandra graduated from school and took a place in the Nuremberg University of Music in the class of famous musician, concertmaster of the Vienna and soloist of the Berlin Philharmonics, Daniel Gade. “I really did not want to leave,” recalls the girl, “I felt like a traitor.” There was war going on in my country, and I was leaving. “

Very soon she realized the opportunities life was giving her in Germany. Here she could put herself on her feet and nothing prevented her from helping her country from abroad. “In Kyiv, I had to run from work to work and could not do anything else,” said the girl. In addition to the students, concert activities and studies, Aleksandra began to implement her ideas. She actively joined the life of the Ukrainian diaspora of Nuremberg and Munich, organized concerts of Ukrainian music, helped in holding events and exhibitions.

The first large-scale project launched by Aleksandra was the trip of the Kyiv chamber choir of girls from Kyiv Specialized Secondary Music boarding school named after M.V. Lysenko to competition “Eterna Roma 2016” in Italy. “I had to write 20 letters a day, because it was necessary to arrange the concerts, food, night’s lodging, etc. …” – Aleksandra recalls her first project. The girl contacted the Ukrainian consulates, diaspora, knocked at the doors of the ministries of culture of different countries and even wrote to the Pope! The organization of almost every trip of Ukrainian musicians is also complicated by the need to seek funds through fundraising. But Aleksandra manages to do this. In addition to participation in the contest, she as a very inexperienced manager (at the moment) managed to organize concerts at the St. Peter’s Cathedral in the Vatican and Ukrainian St. Sofia’s church.

After half a year, the choir went to Berlin to the world contest Choir Games 2017, where the girls set up an absolute record, taking the Grand Prix in all three categories. They immediately brought Ukraine to the second place in the world rating of choirs and the first place in the world in the category of spiritual choral music. After the contest, the girls sang a solo concert in the famous Munich concert complex Gasteig, finally winning the German audience. How many people know that one of the best choirs in the world is studying in Kyiv? If you are not aware of this, then do not forget to listen to it at the prestigious choral festival “Europäisches Jugendchor Festival” in Basel in May and at the Gaudi Cathedral in Barcelona in September 2018. These trips are also organized by Aleksandra.

Now the girl is planning to establish links between Ukrainian and German organizations specializing in inclusion. “People with disabilities and their relatives in Ukraine, to a large extent, are left to their fate,” Aleksandra explains. “This situation must be changed.”

What is cultural diplomacy?

“Often, when I enter the top corner offices with my projects, they meet me with the indifference that can squash any enthusiasm. – admits Aleksandra, – But I still manage to convince the interlocutors of the importance and realism of my ideas.” The girl is sure that Europeans are more progressive than Ukrainians because of greater freedom of thought, which is expressed, among other things, in art.

Fears, the feeling of inferiority and indifference prevent Ukrainians from seeing the opportunities that they have, Aleksandra describes her views on the problems of Ukraine. We need to get rid of the Soviet “I’m afraid” and “poor me”.

To change the situation systemically, Aleksandra developed the project “Cultural Diplomacy” aimed at establishing an equal cultural exchange between Ukraine and other European countries. “My ultimate goal is to organize cooperation between Ukraine and Western countries in the field of culture – schools, universities, various institutions,” says Aleksandra. Naturally, such a project cannot be implemented without the direct participation of the Government of Ukraine. With her usual tenacity, the young girl knocks at the doors of the highest authorities and cannot bear the thought of failure: “All people are, in fact, the same; everyone can be understood and reached out to. If I have to write 1,001 letters for this, I will write them. “

When we exchange goodbyes, I have no doubt that this is what Aleksandra will do.