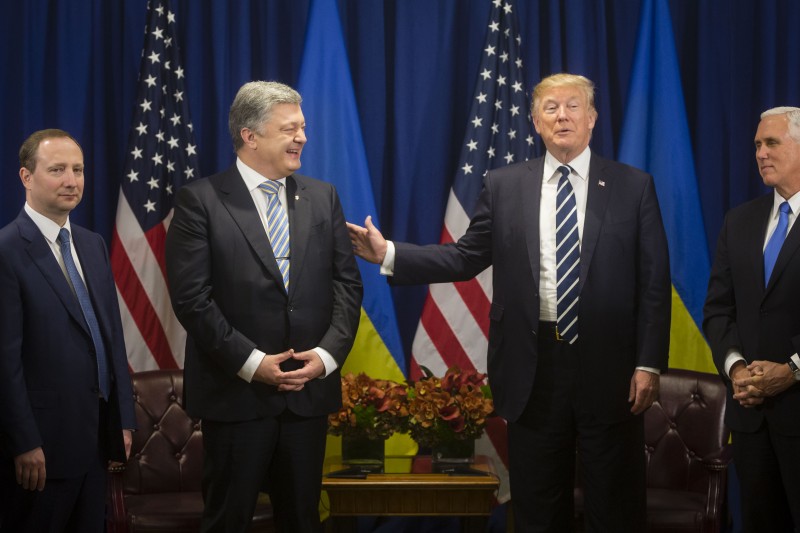 On September 21, the Presidents of Ukraine and the United States held a meeting within the framework of the 72nd session of the UN General Assembly in New York. What did the presidents speak about, what accords did they reach? UCMC publishes some excerpts of public statements made by the heads of states and political experts’ comments.

This is the second meeting of Presidents Donald Trump and Petro Poroshenko. The first time they met was in Washington in June. The Ukrainian President is one of the few world leaders with whom the US President held an expanded one-on-one meeting at the UN General Assembly. According to Voice of America, the meeting was scheduled for half an hour but actually lasted an hour.

What topics were discussed?

Security. Security issues were part of the agenda: “We have discussed in detail every area for expanding this cooperation, starting with cooperation with the West-Point Military Academy and ending with the cooperation with the US Defense Department and other institutions,” said President Poroshenko following the meeting.

Peacekeeping mission in Donbas. According to the Ukrainian President, “the United States fully backed Ukraine’s proposal (…) regarding the deployment of peacekeepers in the occupied territory with the mandate of the United Nations.” The United States President did not comment on this topic in his statement. Political observer Mykhailo Basarab believes this means “[…] that right now the US presidential administration is very cautious about this initiative. That is, there are reasons to believe that today […] everything is not that simple and will not necessarily have a happy ending.”

Economic cooperation. The Presidents noted the revival of bilateral relations in the economic sector. According to President Poroshenko, the trade turnover between Ukraine and the USA has increased by 2.5 times over the last 7 months. The Ukrainian President noted a great success of the first issuing of Ukrainian sovereign bonds on the global markets: a lot of the investors were American companies, including Goldman Sachs and JPMorgan. “Companies are going very strongly right now into the Ukraine. They see a tremendous potential there, so take good care of them,” said  President Trump.

The Voice of America also gives one more indirect confirmation of the revival of economic cooperation between the countries: on the eve of the meeting, the White House tweeted a photo with information about the coal delivered to Ukraine as an example of mutual cooperation and benefits.

Between the lines: what kind of a meeting was it?

Three months have passed since the first meeting of the Presidents. Then the head of the White House just began getting familiar with the situation in Ukraine. Now, according to Ambassador of Ukraine to the United States Valeriy Chalyi’s commentary given to Channel 5, the United States leadership is well informed about both the political processes of the official Kyiv and the issues of Russian aggression in the east. During this time, US Secretary of Defense Jim Mattis visited Ukraine with an official visit.

In an attempt to get an additional interpretation of the meeting, journalists turned to the American President’s Twitter feed. Many of them singled out the adjective “wonderful”, which Trump used to describe the meeting with Poroshenko. “It was wonderful to have President Petro Poroshenko of Ukraine with us in New York City today,” wrote Trump. “Donald Trump is a person who reacts very quickly and emotionally to different things,” says political expert  Oleksiy Holobutsky. According to the expert, such Trump’s reaction testifies that emotional contact with the interlocutor was established and that the Presidents could agree on something.

President Trump also commended the progress made by Ukraine in recent months: “I would not say that it’s the easiest place to live right now, but you’re making it better and better every day. And I hear very, very good things. So, Ukraine is coming along pretty well,” Trump said.