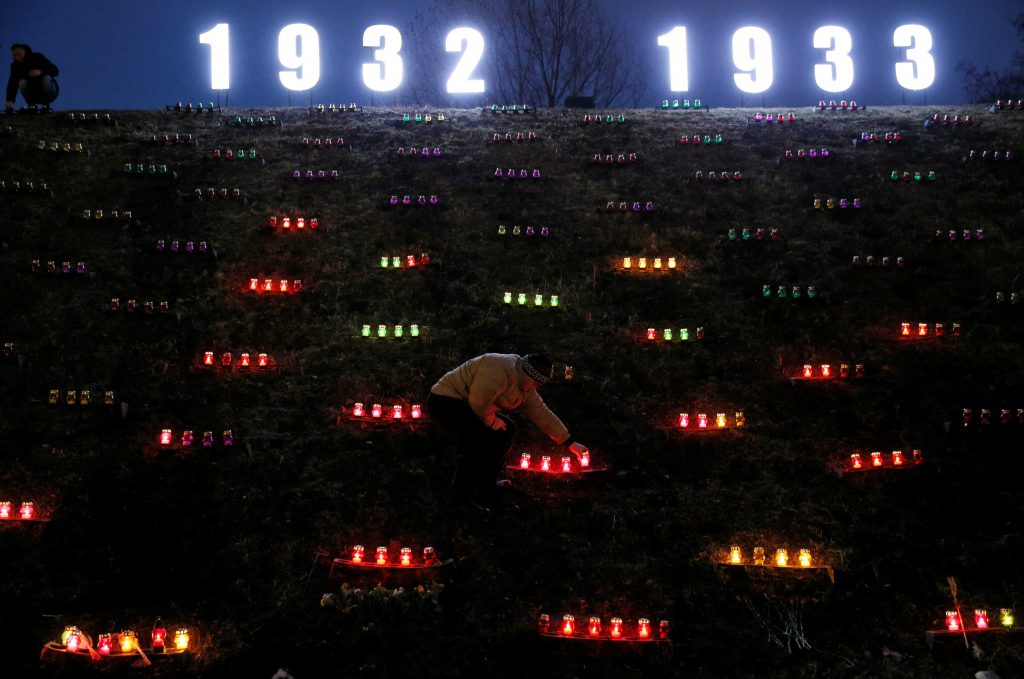 People light and place candles during a commemoration ceremony marking the 83rd anniversary of Holodomor, the famine of 1932-33 in which millions died of hunger, in Kyiv, Ukraine, November 26, 2016. REUTERS/Valentyn Ogirenko

UCMC presents Peter Dickinson’s latest Atlantic Council column on the problems of viewing Ukrainian history through a Russian prism. The article was originally published by the Atlantic Council here.

The international media will embrace all things Bolshevik this autumn as the world marks the centenary of the Russian Revolution. Audiences can expect everything from gushing feature articles about early Soviet cinematography to edgy op-eds on the place of propaganda posters in twentieth century art. Amid this deluge of Communist kitsch, we are unlikely to see a serious analysis of Ukraine’s 1917-21 statehood bid and its considerable relevance to the geopolitical tensions of today. Instead, the Ukrainian independence struggle looks set to be airbrushed out of the Bolshevik spectacular, much as it has been for the past hundred years. Ukrainian history will remain the great unknown of the European narrative.

This is both an error and a missed opportunity. It is an error because events in Ukraine decisively shaped the outcome of the Russian Revolution. The Ukrainian theater played a central role in the fighting that engulfed the Russian Empire after 1917, while Bolshevik opposition to Ukraine’s independence bid exposed the old-school imperial instincts behind all the sexy Soviet sloganeering. Despite its taste for proletarian platitudes, the USSR was a colonial power from the moment its troops first crossed into Ukraine.

It is a missed opportunity because the international community would clearly benefit from a greater awareness of Ukrainian history. The current confrontation over Ukraine has driven the world to the brink of a new Cold War, yet the underlying historical currents at work in Ukraine remain widely misinterpreted and misunderstood. This lack of context leaves global audiences vulnerable to deliberate distortions and disinformation. With little prior knowledge about Ukraine, people have tended to accept Kremlin narratives at face value. For example, many did not think twice when seeing Russian-speaking Ukrainians casually depicted as default Putin supporters, and swallowed arguments that Crimea was “historically Russian” with equally little protest. A more nuanced appreciation of Ukrainian history would have alerted audiences to the paucity of these claims.

Even now, after three and a half years of intensive coverage, numerous commentators continue to view Ukraine’s Revolution of Dignity and the Kremlin’s subsequent hybrid invasion primarily as part of a wider geopolitical struggle between Russia and the West, with Ukraine often cast in the role of hapless pawn. Such thinking not only denies Ukrainians agency. It also diminishes one of Europe’s long-running independence struggles and perpetuates what is arguably the continent’s most glaring historical oversight.

Ukraine’s low historical profile is the product of a troubled past. As a nation divided among competing empires, for centuries the Ukrainian story was a footnote in other people’s histories. There is nothing surprising or unusual about this. After all, history is written by the winners, and even the country’s biggest supporters would hesitate before placing Ukraine in that category. Nevertheless, ignorance of Ukraine’s history is one of the reasons we find ourselves talking once again about the distant but vague possibility of nuclear warfare, so now might be a good time to start paying attention.

One of the biggest barriers to a better understanding of Ukraine’s place in the broader European historical narrative is the habit of treating Russia as a country rather than an empire. For many years, it has been common practice for Western journalists and historians to speak of “Russians” when they are actually referring to the diverse nationalities of the Tsarist Empire and the Soviet Union. Everything goes by the convenient but inaccurate but convenient shorthand of “Russia,” with no room left for complex explanations of the imperial national minority policies or Ukraine’s own claims to statehood.

Accounts of World War II are a particularly good example of this practice. Western histories of the war routinely refer to Soviet forces collectively as “the Russians.” We learn that “the Russians” suffered twenty-seven million losses before taking Berlin. Meanwhile, there is scant reference to the fact Ukraine saw far more of the actual fighting than Russia, nor to the millions of Ukrainians who fought in the Red Army. The scale of Ukraine’s human and material losses during the conflict defies comprehension, but the country barely gets a mention. This staggering omission demonstrates the sheer size of Europe’s Ukraine-shaped blind spot.

Some historians are already fighting back on Ukraine’s behalf. Yale’s Timothy Snyder, who has long led the field in the study of Ukraine’s blood-drenched twentieth century history, argues that from Hitler’s point of view, the purpose of World War II was the conquest of Ukraine and this emphasis on Ukraine should be central to our understanding of the war. Instead, we learn exclusively about the wartime experience of “the Russians,” while Germans are encouraged to feel a moral obligation toward the modern Russian state. As if to add insult to injury, the few specific references to Ukrainians in standard Western histories of World War II tend to focus on collaboration with the Nazis.

Another historian providing fresh insight into Ukrainian history is Anne Applebaum, whose latest book focuses on the horrors of the manufactured famine that served as the centerpiece of Stalin’s genocidal 1930s “War on Ukraine.” Applebaum’s book is a timely addition that places the famine within the broader context of the Soviet campaign to crush the Ukrainian peasantry and intelligentsia. However, it is noteworthy that even the most favorable reviews have treated the book’s contents as revelatory in nature, highlighting just how obscure this apocalyptic episode remains. If they had known more about the famine, global audiences would probably not have been so unprepared for the fake news epidemic unleashed by the Kremlin since 2014. They would have been familiar with the dark power of Kremlin fakery thanks to an awareness of way the Soviets covered up the 1930s famine in Ukraine, which remains the most elaborate and successful fake news operation in world history. Instead, this well-worn Kremlin strategy has been hailed as an entirely new form of warfare altogether.

Ukraine’s rise to global prominence since 2014 has taken many by surprise and exposed gaping holes in the accepted orthodoxies of European history. This has created significant challenges. Ukraine is simply too large and too much of an unknown quantity to slip seamlessly into the existing European narrative. Instead, it will inevitably take time for popular perceptions of Europe to accommodate these changes. For the time being, there is modest progress. International audiences are belatedly beginning to recognize that Ukraine is not Russia, but there is still considerable resistance to the idea of Ukraine as a fully-fledged member of the European community. Eventually, Ukraine’s European credentials will become self-evident, even in Russia itself. However, until we reach that point, Europe will struggle to formulate a coherent policy toward a country whose awkward emergence poses important questions for the continent’s understanding of its own past.