One hundred eleven new Supreme Court judges, whose candidatures were submitted on October 11 for approval by the High Council of Justice to the President of Ukraine, are expected to be appointed. The President will have to sign a decree to formalize the appointment.

The future judges were selected through the first competition to the Supreme Court ever held in Ukraine, which was conducted by the High Qualification Commission of Judges of Ukraine within nine months. The winners of the competition have been approved by the High Council of Justice.

For the first time, advocates and academicians will become judges of the Supreme Court. “The previous law allowed only judge apply to those positions,” said HQCJ Member Stanislav Shchotka. There will be 83 judges, 9 lawyers, 15 academicians and 4 people with total legal background in the new Supreme Court, the number of “not judges” amounting to 25 per cent. “This is a very high rate,” according to HQCJ.

The gender balance has also been respected. The new Supreme Court will be composed of 63 male and 48 female judges. Almost 96 per cent are new people for the Supreme Court, and 60 per cent have never worked in cassation courts. Among the future judges, 33 have PhD and 10 doctors in law degrees. The youngest candidate is 33 years old, the oldest is 62. 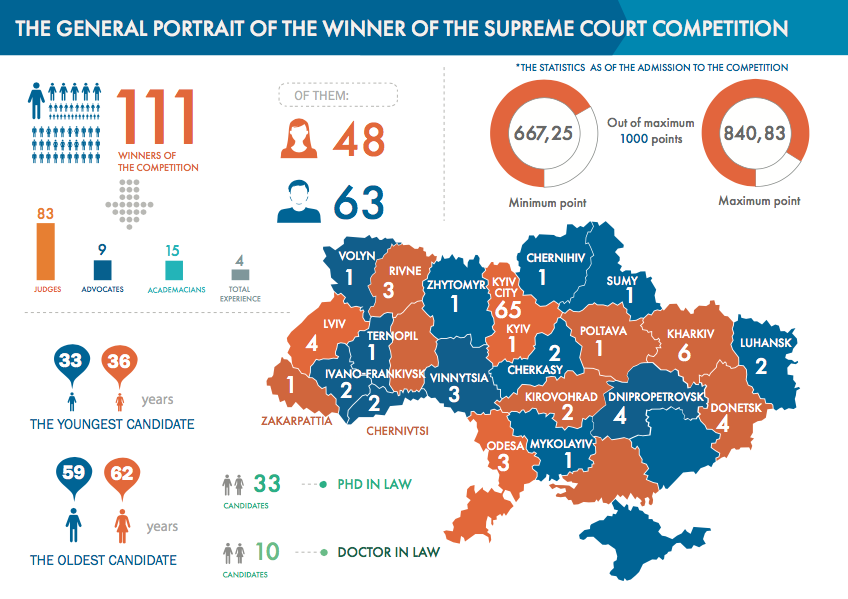 The HQCJ selected 120 winners. The HCJ recommended 111 out of them for appointment. Two winners were refused, and seven other were suspended.

Each candidate was assessed against the criteria of professional, social and personal competence, professional ethics and integrity. The tools for assessment were the MCQ test on professional knowledge, professional practical tasks, testing of personal moral and psychological qualities and general skills (HCS Integrity Check, BFQ-2, MMPI-2, General skills test) and interviews with professional psychologists and with the HQCJ. The assessment also included information research and reviews of the candidates by the National Anti-Corruption Bureau of Ukraine, the National Agency on Corruption Prevention, and the Public Integrity Council (PIC). As a result, 80% of candidates, who received negative opinions from the PIC, failed the competition.

“For the first time, representatives of the civil society participate in the qualification assessment of judges. This is a new tool – not only in Ukraine but also among international traditions of assessing judicial candidates. But all stakeholders must remember that PIC’s “role is solely advisory and is not decisive,” as the Council of Europe’s Consultative Council of European Judges clearly recommends” – said Head of the Commission Sergii Koziakov.

International experts highly praise the transparent, balanced and professional approach to the competition. “The candidate evaluation process was conducted in accordance with existing European standards with a strong requirement of knowledge of the European Convention of Human Right as well as of the caselaw of the European Court of Human Rights” – noted Regis Brillat, Special Advisor of the Council of Europe Secretary General for Ukraine.

Dovydas Vitkauskas, team leader at the “Support to Justice Sector Reforms in Ukraine” project noted that “The judge selection competition for the Supreme Court of Ukraine is a unique process even by EU standards. Ukraine is one of the first countries to apply a system of technocracy in its judicial system, in which not only the candidates’ legal knowledge, but also their social competence and psychological abilities, are assessed in a transparent selection process. In doing so, Ukraine is setting a new standard to be followed by other countries, including developed democracies”.