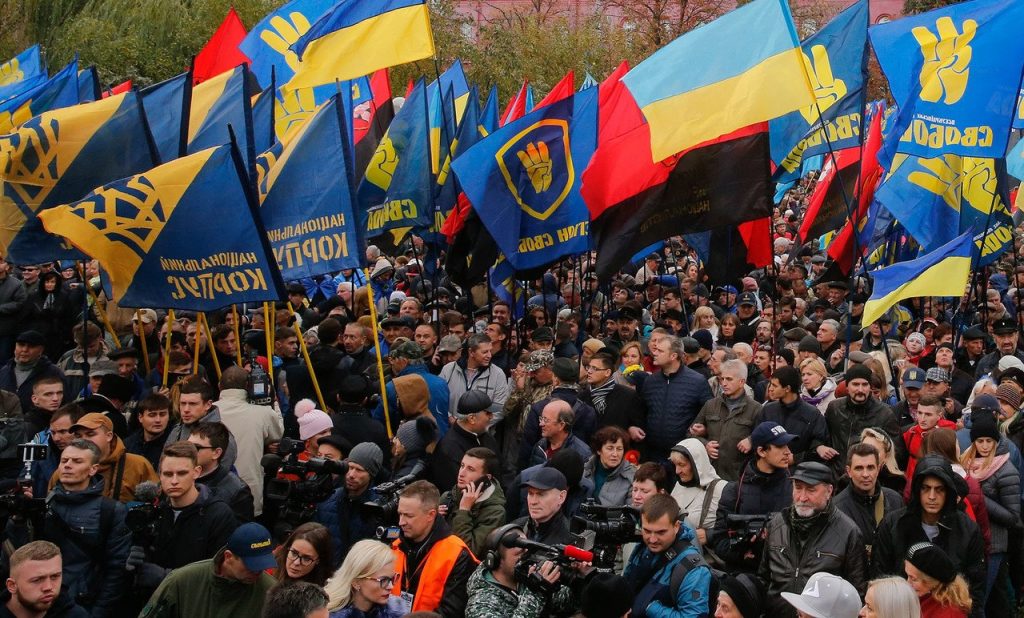 On October 17, a rally “All-Ukrainian gathering” convened several thousand people on the square across the Verkhovna Rada for “big political reform” for the removal of parliamentary immunity, the change of electoral legislation, and the creation of an anti-corruption court.

This is the first mass action in three years after the Maidan. The general demands of the rally have united many different communities with polar interests – from non-governmental organizations to different political parties, bringing the total number to six NGOs, nine political parties, and 11 deputies representing absolutely differing political views.

The rally was announced on September 20, when at the Independence Square activists and deputies voiced the demands of the participants of the forthcoming rally. However, back then there were no representatives of nationalists (in particular the “National Corps”) among them.

KyivPride, a key organizer of the “March of Equality” for LGBT rights, also announced their participation in the action.

The participants of the action have three requirements:

To introduce a proportional electoral system based on open list principle.

The organizers of the action demand the adoption of a bill on the abolition of parliamentary immunity. In July this year, the project was co-authored by several dozen people’s deputies from practically all parliamentary factions. However, this is not the only project that proposes the abolition of immunity. In October 2015, a similar bill was filed to the Parliament by President Poroshenko.

To create the Anti-Corruption Court.

The heads of the National Anti-Corruption Bureau of Ukraine and the Specialized Anti-Corruption Prosecutor’s Office have long demanded this. At the same time, President Poroshenko claimed he was not against the idea at all, but the creation of such an institution could take at least two years, therefore, he proposed to establish anticorruption chambers in the existing courts at first.

On October 3, a respective bill was registered in the Parliament. It was prepared by MPs Mustafa Nayyem, Yehor Soboliev, and others, including co-organizers of the action. However, the document was not supported by the Venice Commission. On October 10, it issued a conclusion inviting the authors to withdraw the draft law from the Parliament.

The Commission generally welcomes the idea of establishing such a court, but recommends avoiding the politicization of the process and recommends that the relevant draft law should be introduced by the President of Ukraine. However, the Commission does not recommend the creation of anti-corruption chambers and suggests improving the existing draft law.

If the parliament ignores these requirements, some of the participants, in particular, Mikheil Saakashvili, promise to continue the action for an indefinite period and demand early parliamentary and presidential elections.

In addition to the action in front of the Verkhovna Rada, the organizers announced similar rallies in 11 regions of the country including Odesa, Lviv, Dnipro, Kharkiv, Khmelnytskyi.

What is the progress so far?

The public order is secured by the units of the National Police and the National Guard with personnel of 3,500 people. First Deputy Interior Minister Serhiy Yarovyi announced this on October 17.

The protesters installed more than 50 tents in front of the Verkhovna Rada.

The coalition in the Verkhovna Rada has refused to comply with the requirements of the rally. According to Mustafa Nayyem, a politician and one of the participants of the rally, the leaders of Petro Poroshenko Bloc and the People’s Front are ready to include in Thursday’s agenda two of the three requirements: the abolition of parliamentary immunity and election laws.