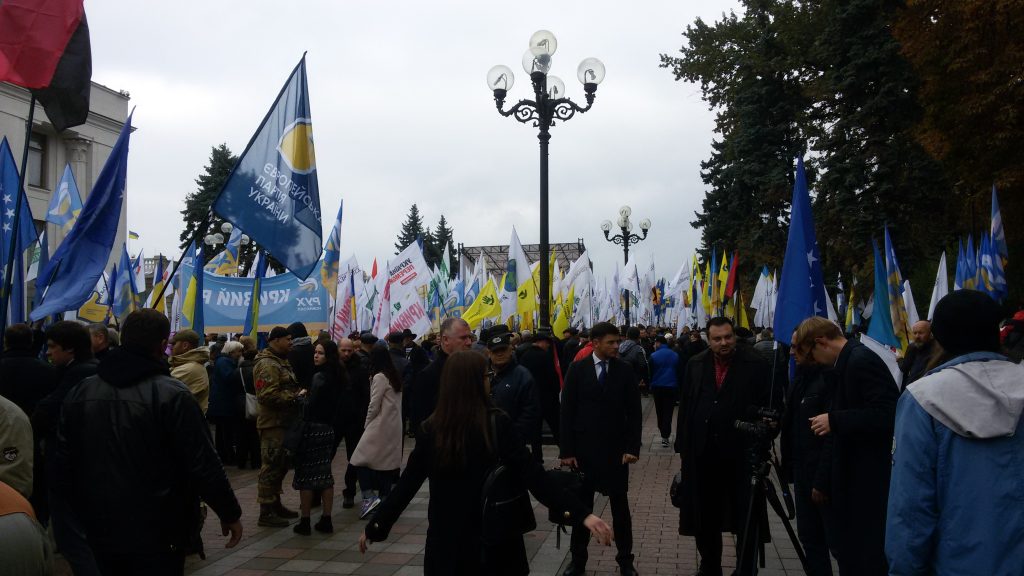 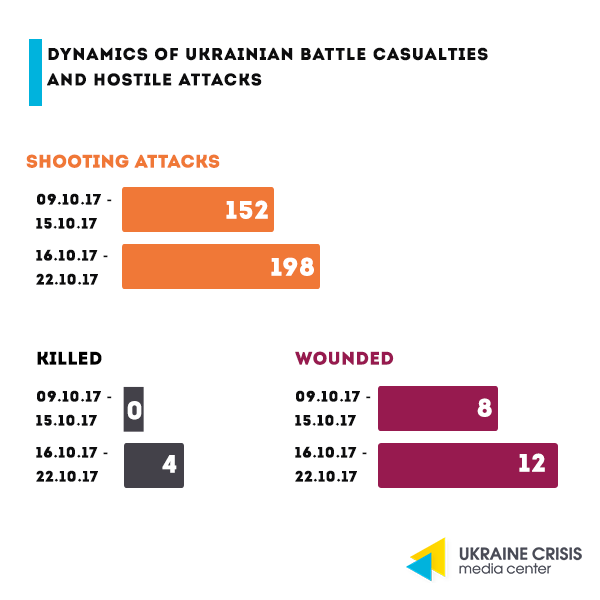 The situation in the conflict zone in eastern Ukraine has been deteriorating. The number of attacks is growing.

OSCE. Alexander Hug, Principal Deputy Chief Monitor of the OSCE Special Monitoring Mission to Ukraine, stated that compared to the beginning of September when the “school-time” ceasefire repeatedly came into force the number of ceasefire violations increased by 140 percent.

MH17: a new evidence of Russia’s involvement. The Joint Investigation Team (JIT), the Dutch-led criminal investigation into the downing of the MH17 plane, released a new photo of the Russian Buk missile launcher that downed the plane. On the photo, the BUK missile system is captured on the day of the MH17 crash. According to Bellingcat, the marking of the BUK system on the photo completely coincides with the one on the right side of the BUK 332 spotted in Russia four weeks before the MH17 downing. “After today, with the ninth piece of visual evidence publicly available showing the weapon belonging to the Russian Armed Forces in eastern Ukraine, there is no room left at all for doubt,” the Bellingcat report says.

A woman in Donetsk “arrested” for a photo of an apartment house. In Donetsk a civilian woman was accused of espionage for a photo of an apartment house, said Denys Denysenko, deputy head of the board of the Luhansk regional human rights center “Alternativa”. “In Donetsk a woman, employee of a municipally-owned company, occasionally took a picture of an apartment house. It turned out that it is where one of the leaders of the militant group lives. When she was seen photographing this house with her cell phone, she was detained and accused of espionage. Currently, she is in prison. Lawyers are trying to help her, we have passed this information to the UN office (they have their representation in Donetsk and Luhansk),” he said.

The number of students from the occupied territories studying in the government-controlled territory has increased by 30 percent. This academic year 1,550 students from the occupied areas entered the universities in the Ukraine-controlled territory through the specialized state educational centers “Donbas Ukraine” and “Crimea Ukraine”. The number represents a one-third increase compared to the last year, reports the Luhansk regional administration.

Rallies outside of the Parliament: what happened over the past week?

How it all started. Back in summer activists and MPs of the Eurooptimists inter-factional group started preparations to the rally demanding to lift the parliamentary immunity, approve the new election law, and establish anti-corruption courts. Over the next month, organizers were touring across Ukraine encouraging people to come to Kyiv on October 17 or rally in their city on this date.

How the week-long rally went. Two first days after the tent town was installed on Hrushevsky street were relatively calm, there were a few episodes when the police and the protesters clashed blaming each other of staging provocations. Mikheil Saakashvili kept making statements from the stage that the President needs to resign. “If Poroshenko does not hear you today, we will have to move to another place. […]” Meanwhile the organizers of the rally were arguing with each other as to the next steps. Saakashvili, as well as MPs Soboliev, Semenchenko, and Leshchenko insisted that the rally continues indefinitely in case the Parliament does not pass the laws in question by Thursday. Instead, MPs Nayyem, Zalishchuk, Chumak, and Yuriy Derevyanko of Saakashvili’s party Movement of the New Forces, were in favor of ending the rally as there will be no plenary sessions in the Rada in the next two weeks.

The outcome. On October 19, the Parliament made a step towards the protesters. MPs voted in two draft changes to the Constitution regarding the lifting of the parliamentary immunity and sent the documents to the Constitutional Court for the expertise. Moreover, the Parliament considered all the registered drafts of the election law and tasked the respective parliamentary committee to prepare a single draft based on them. At the same time, there were no developments as to the approval of the law on the anti-corruption court.

Crimea: the right to peaceful protest violated and the pressure on Crimean Tatars

In Crimea 256 participants of peaceful assemblies have been held administratively liable since the occupation started. Crimea’s occupational authorities have issued 268 court decisions in the cases of peaceful assembly participants, 256 persons have been held administratively liable. “Since March 2014 the right to peaceful assembly does not exist in Crimea,” emphasized the coordinator of the Media Initiative for Human Rights Maria Tomak. Among the most well-spread reasons behind the detention, administrative or criminal liability are a clear Ukrainian or Crimean Tatar self-identification, participation in the events on the occasion of the Crimean Tatar deportation anniversary, religious beliefs, etc. Ukraine has filed dozens of appeals to the European Court of Human Rights to contest the decisions of the occupational authorities.

Deputy Head of Mejlis taken to a hospital. Ilmi Umerov, Deputy Head of Mejlis (Crimean Tatar representative body), who had been illegally imprisoned in the occupied Crimea, was taken to a hospital, reported his lawyer Edem Semedlyayev who visited him in the hospital. The Crimean Tatar leader added that he had problems with blood pressure. To remind, Umerov was sentenced to two years in a penal colony by the Russia-controlled district court in Simferopol. Occupational authorities charged the Crimean Tatar with extremism.

Ukraine has been elected to the UN Human Rights Council (HRC) with a mandate for the next three years after the vote at a plenary meeting of the UN General Assembly on October 16. Ukraine’s participation in the work of the Council is seen as an important tool of Ukraine’s foreign policy as well as confirmation of being committed to the principles stipulated by the Universal Declaration of Human Rights. Cooperation within the HRC provides additional opportunities to present the explanation of the official position as to the key issues relevant to human rights protection as well as for the setup of efficient international cooperation in the area. 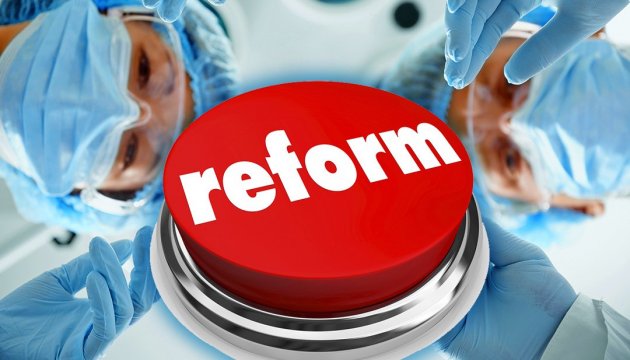 “The UK and other G7 states believe that the passage of the healthcare reform plan, which defines State guarantees for the financing of insured medical services and medicines through the National Health Service of Ukraine, is a sign that Ukraine is ready and committed to moving forward with its vital reforms, in healthcare and anti-corruption, for the benefit of its citizens,” stated the British Embassy in Ukraine.

On October 19, the Verkhovna Rada (Ukraine’s Parliament) adopted the draft law #6327 “On state financial guarantees for the provision of medical services and medicines”. The draft law is seen as the actual start of the long-awaited medical reform. On the same day, the Parliament adopted amendments to the Budget Code required to implement the financing of the medical reform as well as the presidential draft law #7117 on increasing accessibility and quality of medical services in rural areas. For more details on the medical reform check out UCMC’s materials “What do you need to know about the healthcare reform in Ukraine?” and “Another step towards healthcare reform”. 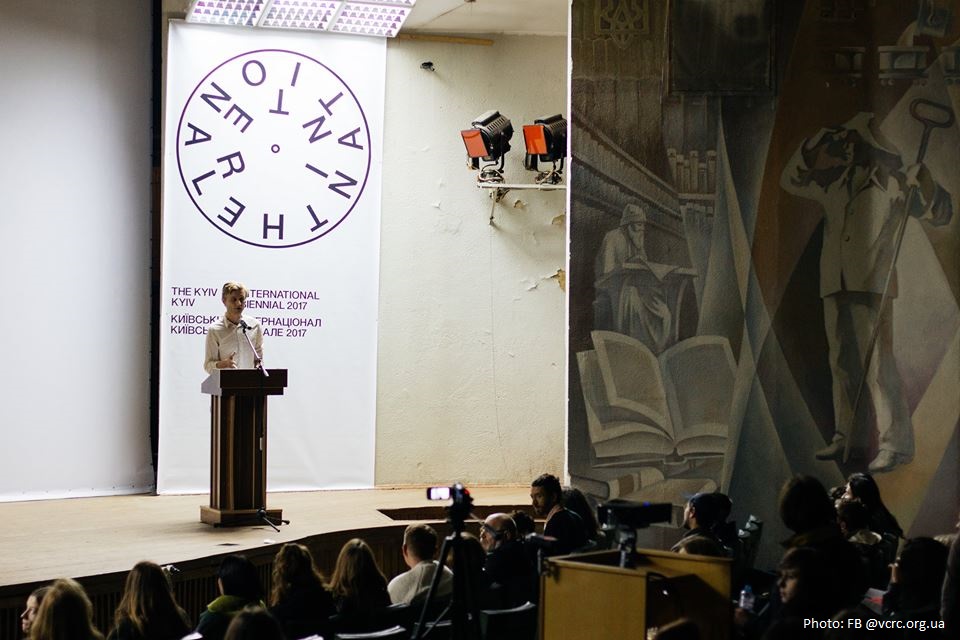 A series of artistic events organized by “Khudrada” Ukrainian group of artists and entitled “Kyiv International. Kyiv Biennial 2017” starts in Kyiv. “Khudrada” was formed as an artistic group during the Orange Revolution of 2004. The organizers of the event note that the Kyiv Biennial takes place in the year of the centennial anniversary of the 1917 revolutionary events, however, the topics of the biennial relate to the current Ukrainian context including collective memory and censorship. The event is composed of several thematic blocks that comprise exhibitions of visual art, performances, concerts of experimental music, film screenings, lectures, etc. Artists from Germany, Austria, the UK, the US, China, Poland and Greece are also taking part in the Kyiv Biennial. Among the biennial’s locations are Kyiv’s historic sites Tarilka – the constructivist building of a scientific institute near Lybidska metro station, and Zhytni market. 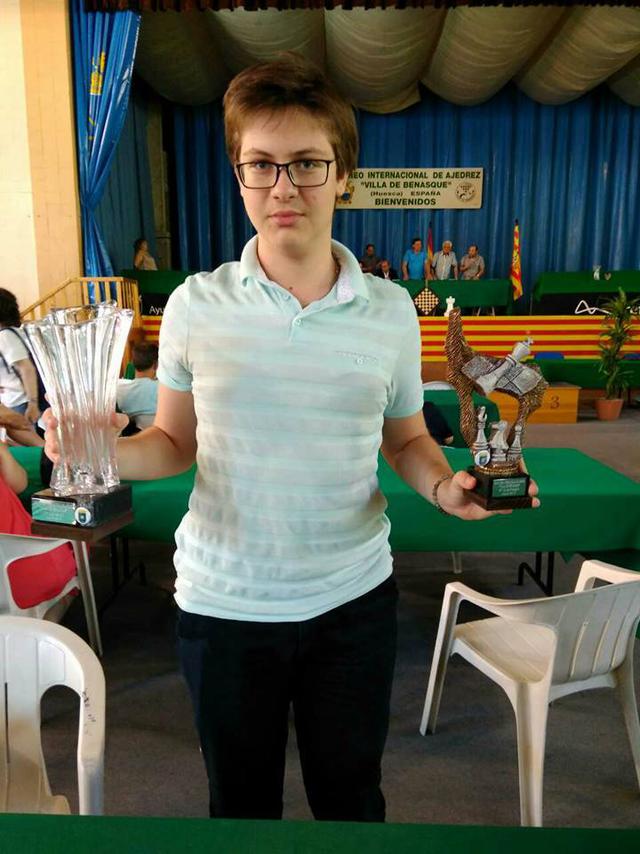 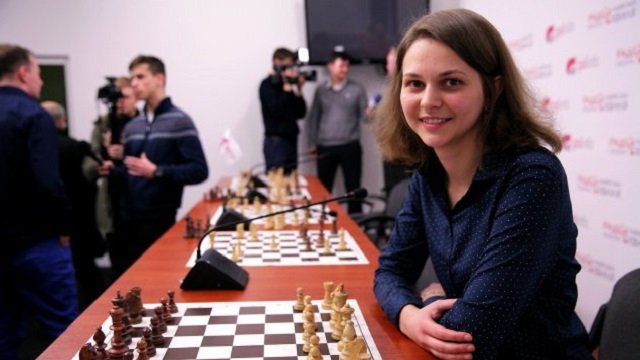