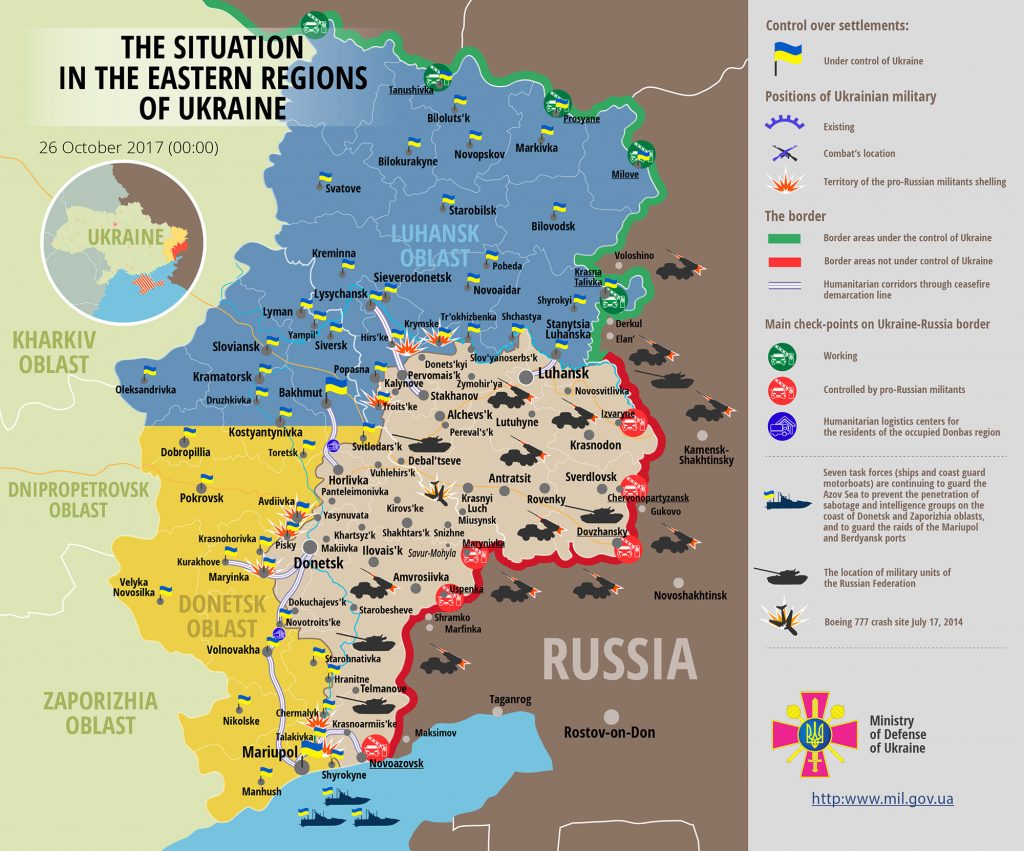 In Donetsk sector militants violated the ceasefire seven times, mostly during the day and in the evening. The largest number of attacks was recorded in the vicinity of Avdiivka, where militants opened aimed fire four times. “The situation was also restless on the approaches to Pisky, where the enemy was shooting from grenade launchers and IFV weapons for over an hour. The enemy fired eight rounds from 120-mm mortars, which are proscribed under Minsk agreements. Ukrainian troops mostly calmed the enemy down using all the allowed weapons,” said Col. Lysenko.

Four aimed attacks were recorded in Mariupol sector in the morning and in the evening. “The situation was the most restless near Vodiane, where the enemy shelled Ukrainian positions with large machine guns after 11:00 and fired four 82-mm mortar rounds. Moreover, militants attacked Hnutove, Lebedynske and Talakivka with small arms and grenade launchers,” elaborated the spokesman. Russian proxies attacked Vodiane residential area with 120-mm mortars twice, hitting them with heavy mortar rounds four times.

In Luhansk sector Russian proxies opened fire at Ukrainian troops’ positions four times in the afternoon. Two hostile attacks were registered at the approaches to Novotoshkisvke. They involved small arms and grenade launchers. Militants launched 20 Grad MRLS missiles towards Ukrainian strongholds near Troitske. “These attacks posed no threat to our troops’ lives, so they did not return fire. At the same time, Ukrainian troops responded with effective fire from small arms and grenade launchers,” informed Col. Lysenko.

No Ukrainian serviceman was killed in action. “One soldier was wounded near Avdiivka and was promptly evacuated to mobile military hospital,” added the spokesman.

Report on the military developments as of October 25 is available here. Interactive data on the shelling: chronology shelling chart and the interactive map.