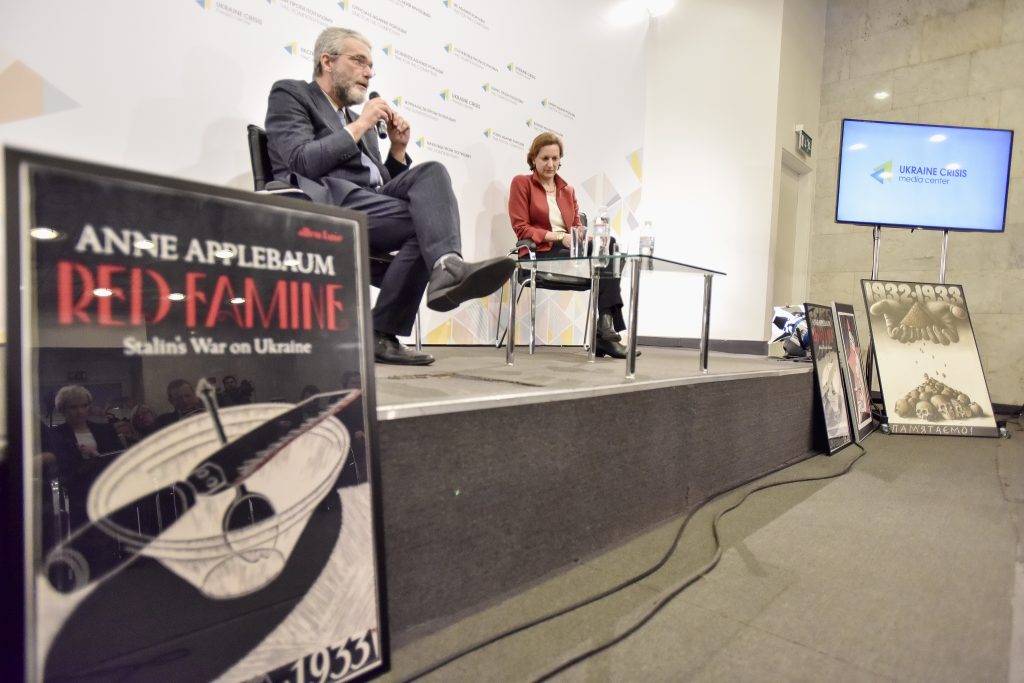 In the end of November, Ukrainians commemorate their compatriots who died of an artificial hunger, the Holodomor, in 1932-1933. On the eve of the tragic anniversary, Anne Applebaum, a prominent American historian, presents her book about the Holodomor in Kyiv.

Ms. Applebaum is the former member of “The Washington Post” editorial board (2002-2006); the Pulitzer Prize winner for the book ’Gulag: A History’ (2004); a regular columnist for the Washington Post and a Professor of Practice at the London School of Economics. “Red Famine: Stalin’s War on Ukraine”, her newest book, begins with the Ukrainian revolution of 1917 and ends with the Ukrainian famine of 1932-33. Anne Applebaum argues that the famine was not an unintended fault of Soviet “collectivization” policy: Stalin used the famine to crush growing dissent among the peasants, for fear that any dissent and dissident opinions in Ukraine, moreover, connected with Ukrainian national idea, were a vital threat to the Soviet Union. At the presentation at Ukraine Crisis Media Center Anne Applebaum tells about her work. 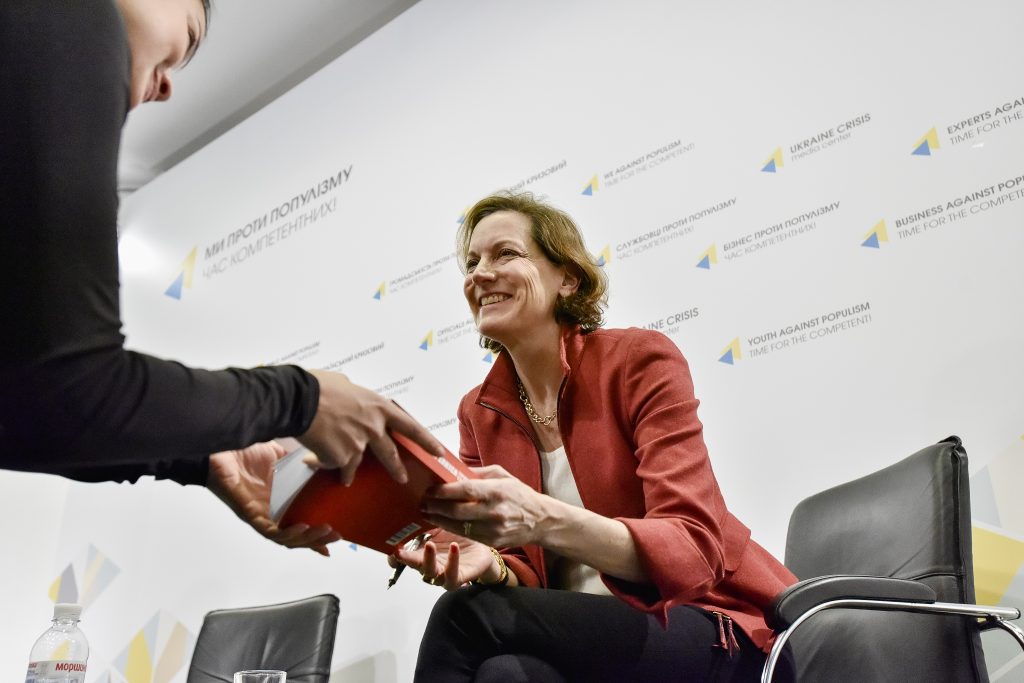 Audience: What was your impulse for writing this book?

Anne Applebaum: I was convinced by the scholars at Harvard that there was enough material to write the book differently. I first read Robert Conquest’s book “The Harvest of Sorrow” in the 1980s when it came out, so I knew the story and I assumed there’s not much to add to it. But I was convinced the archival record was now different and it meant that you could tell the story differently. And I believe that’s true: with the use of archives you can now explain not just collectivization and chaos and so on, but you can also explain that there were these particular decrees and decisions that Stalin took that effected only Ukraine in the autumn of 1932, and that a set of policies was followed only in Ukraine in the winter of 1932-1933. Therefore, you had the spiking deaths in Ukraine in the spring of 1933 and that it related to those decisions. In other words, you can now show causal mechanism: that it was intentional, that it was directed at Ukraine, and that it was done for the reasons that we’ve already discussed. By the way, there is no ‘smoking gun’, there is no document, where Stalin says: “Here’s why I’m going to kill a lot of Ukrainians and here are my reasons for it” – that doesn’t exist. But you can now use archives, reconstruct the sequence of events in such a way that you can show what happens. So the idea that you could write a book differently is part of what appealed to me. And then, as I’ve said, I’ve had this long-standing interest in Ukraine and the idea to able to establish something like that as definitively as possible. That was the impulse for writing the book.

Marko Suprun. Do you see the utility in organizing exhumations of some of the people who died from famine? Particularly, I know, a lot of the mothers would secretly bury their kids, most likely in the backyards, and I happen to know a place, where my grandmother did that with my father’s brothers. Do you think that would be something that is needed to further the story? Or is it something that we are going to be accused of digging up history?

Anne Applebaum: I am very against this idea of exhumation. I know there is a fashion for this in a number of countries, but I don’t see it serves the present to dig up dead bodies in the past. It strikes me as unnecessary. I’d rather see people decently buried. If you know someone is buried at some place – put up a marker, but I’d rather not dig up dead bodies.

Anastasiia Zanuda, BBC. You mentioned that you started the story of events from 1917 because you believe that the Great Famine was one of the consequences of what started in 1917. Have you some idea on how Holodomor influenced the genetic code of Ukrainians? There is a general opinion in Ukraine that Ukrainians have a very sensitive attitude to food, which results in our inability to organize our own state institutions and that we prefer to accumulate wealth instead work for the sake of the state. Do you think that think that the roots of those bad habits are in 1933?

There were a lot of long-term effects, which we continue to see today. I have written about those in the book and this question was one of the subjects of my talk this morning at Kyiv Mohyla Academy. If you look at the long-term impact of the famine on Ukraine, you can see this legacy of the lack of trust, which is probably the most important. It’s not really just the famine, but the Soviet legacy and the destruction of generation of patriotic intellectuals and their replacement with people who were very frightened, who knew they had to toe the line, who feared being arrested and murdered. All of that created a political class and a class of civil servants who were not trusted by most people. I think most Ukrainians – actually, let’s not confine it to Ukraine, let’s say most Soviet citizens – from the 30s into the 40s, 50s, 60s, 70s and 80s learned that the state was something that you don’t trust. And people who work for it are suspect and have an awkward relationship with the rest of the country, they see themselves as “privileged”, they are afraid of authority… It created all kinds of pathologies that you can see now, that certainly have an echo in modern Ukraine.

Of course there are others impacts. The russification, for example, that followed the famine, created a lot of confusion in the mind of Russians about what is Russia and what is Ukraine; it created a lot of confusion among other Europeans, who still for a long time didn’t understand that there is any difference. And it created a lot of confusion of Ukrainians: who are they, to which state they are loyal, which is their real language, is it possible to have a bilingual country, which, by the way, I think Ukraine is and it is one of your great advantages. But and as I’ve said, I gave a lecture about it this morning, so I think it is an excellent question.

Olesya Ogryzko, UN: All of us here know about the famines. Why did you concentrate on the thirties, rather because of political arguments or another reason?

Anne Applebaum: The 1921-1922 is in the book, and there is smaller famine of 1929, which is covered by Ukrainian historians. The reason for the bigger focus on 1933 is because of the extreme number of people who died, and also because this famine was directed on Ukraine, it was more political than other famines.

Gosha Tyhyi, television: How much of access did you have to Russian part of archives, how much is covered?

When I worked very intensively on Russian archives during my book on GULAG, people looked at me and many other western academics like were crazy. They said “read what you want” – nobody was interested. Throughout the nineties and the beginning of two thousands many documents were published, copied and put on disk. The entire GULAG archive, great number of documents you can now read in California. They have a huge collection of materials from the Belorussian-Poland border, there is also a work on nationality; I did not feel deprived of Russian archives.

There is some missing – the operational orders. It should be somewhere, maybe in some collection that we do not know yet. Ukraine is good for publishing this collection of documents. Russia has done that, publishing the book after book. A lot is available, Ukrainian archives are pretty to use; a lot can still be done.

Audience: What would be your message to Russian audience?

Anne Applebaum: That’s the question more to you than tо me – you grew up next to that culture, you have seen Russian media, you have connections and ability to speak with them.

You should define the way to speak to Russians, not pointing that “you are all evil”. Determine the things that are common. We don’t even need to talk about democracy or justice. If you were able to link your anti-corruption institutions to Russian anti-corruption institutions, that would be a great movement. You could fight the same problems – these problems are global. Linking your arguments to several groups and Russia would be hugely beneficial, that would help to explain what type of country you are.

Kulykov: Thank you for the questions.