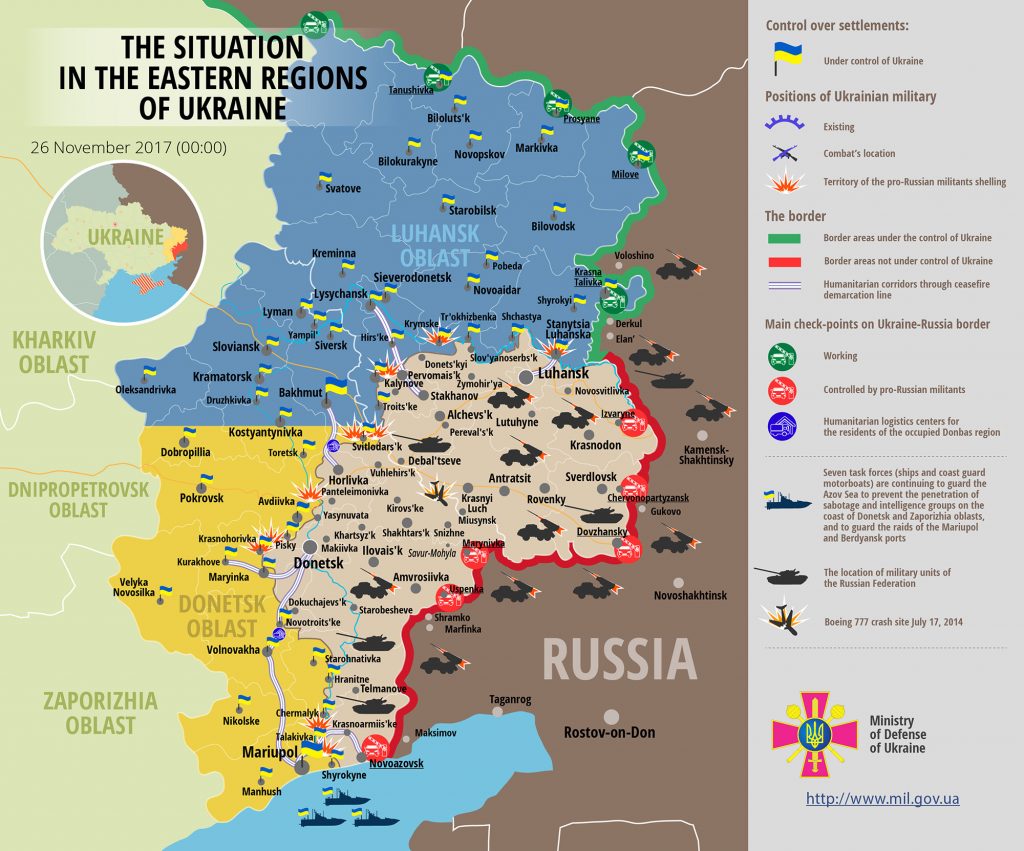 In Luhansk sector, militants conducted seven direct fire attacks at Ukrainian positions, the most powerful one took place in the vicinity of Travneve. “At night the adversary was firing on our positions from 120-mm mortars, firing a total of 9 rounds. In the morning Russian proxies opened fire from grenade launchers,” elaborated the spokesman. In the morning, militants fired from mounted equipment of infantry fighting vehicle near Luhanske. In the evening they fired on forward Ukrainian positions in Novoluhanske and Novooleksandrivka from 82-mm mortars and grenade launchers. Ukrainian servicemen responded with fire one time.

In Donetsk sector, Russia-backed militants violated the ceasefire 8 times. Two attacks took place near Shakhta Butovka position. Verknotoretske was the main hotspot in the sector, the firefight started in the morning and continued until twilights. Militants were using snipers and various infantry arms, then after 15:00 opened fire from Minsk-proscribed 120-mm and 82-mm mortars. “They fired a total of 23 rounds at Ukrainian positions in Pavlopil, Nevelske and Shakhta Butovka position,” noted Col. Motuzyanyk. Ukrainian servicemen responded with fire. “Moreover, militants were firing at their own positions, including fire from Minsk-proscribed weapons, and then at Ukrainian positions, with purpose to accuse Ukrainian army of ceasefire violations,” he added.

Two Ukrainian servicemen were killed yesterday in the firefight in Verkhnotoretske, four were wounded in action in Verknotoretske and Vodyane.

Report on the military developments as of November 25 is available here. Interactive data on the shelling: chronology shelling chart and the interactive map.