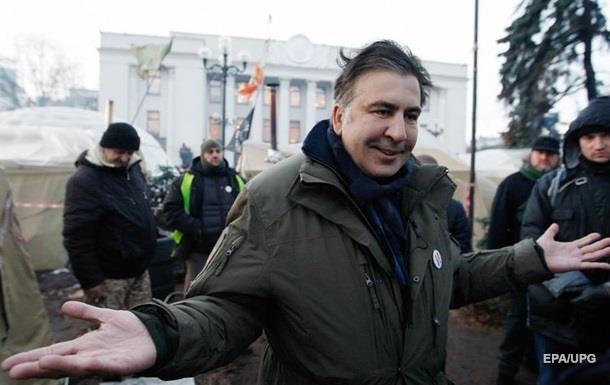 On December 5, Ukraine’s special forces detained former head of administration of Odesa region and ex-president of Georgia Mikheil Saakashvili on the roof of the building where he lives on Kostyolna street in Kyiv. However, they failed to take him to the detention center as his allies first blocked the vehicles of the law enforcement, then tried to literally tear him out of their hands. Following several hours of an improvised rally, the supporters of the Georgian politician managed to take him out of the car. He then walked unimpeded to the Verkhovna Rada where he held a rally and stayed overnight in one of the tents. The morning attempt to storm the tent city failed as well.

All Ukrainian and many international media covered these events. But what do they actually mean? Is Saakashvili guilty of what he is being accused of? What consequences will face the Ukrainian political establishment? Who is to win and who is to lose in this standoff? What happens next?

This episode has more questions than answers. UCMC has been attentively following the reactions of experts, politicians, and opinion leaders and collected truly important questions that are of concern to the Ukrainian society. In the end, sometimes right questions are far more important than speculations over different explanations.

Saakashvili, who used to be an ally of the authorities in power and the head of Odesa Region Administration, who is still a bright politician and a spectacular actor for political shows, seems an unlikely candidate for a position of the “biggest enemy of Ukraine”. In times of non-reformed judiciary and lack of justice in  Ukrainian society, even when it comes to the loudest cases, Saakashvili as the one chosen to be arrested looks strange.

Vakhtang Kipiani, a renowned Ukrainian journalist, a TV host at ZIK channel, formulated a witty question in this regard: “In four years Ukraine’s Security Service never found the reasons, time, and will to detain or at least to disturb by any means Medvedchuk, Akhmetov, Novynsky, Boyko, Shufrych, Kernes, or other personalities of the same kind who are many. The Security Service pretends not to be aware of the fact that Odesa’s mayor Trukhanov has a Russian passport, or that the Head of the Fiscal Service Nasirov has a British one. Dozens of mayors who are clearly separatists from the cities of Donbas are free and in power. Instead, we see a video from Kostyolna street that demonstrates who is the main enemy of the statehood.”

It is exactly this question that does not allow the Ukrainian society to support the actions of Ukraine’s authorities and law enforcement.

Why was he not detained?

Ironically, the attempt to arrest Saakashvili failed as the unarmed politician has managed to avoid detention. Moreover, it’s not the first time when the politician bypasses Ukrainian laws – it’s worth recalling his notorious breakthrough across the Ukrainian-Polish border after he was stripped off Ukrainian citizenship. Why is it happening this way? Sevgil Musayeva-Borovyk, editor-in-chief of an online media “Ukrainska Pravda” noted:

“I realized already around 9 a.m. that the authorities were deemed to fail in today’s story. I have no idea who had planned the operation but they created each and every prerequisite to what has actually happened. […] The conclusion I made is sad, to be honest. The authorities tried to demonstrate their force but ended up staging a circus performance. Ukraine’s authorities are weak as never before and are lying on the ground,” commented the journalist.

Yuriy Lutsenko, Prosecutor General of Ukraine, speaking in the Parliament even apologized for the inefficiency of law enforcement officials in this case.

Almost all law enforcement agencies but the National Anticorruption Bureau and the Special Anticorruption Prosecutor’s Office were involved in the operation to arrest Saakashvili. Why do they fail every time they try to deal with Saakasvili? Is it an act of conscious sabotage, lack of coordination or trust between different agencies, or mere indecisiveness?

Should one believe the taped conversations presented by the prosecution?

Saakashvili is being charged with cooperation with a criminal organization. First at a press briefing, and later in the Parliamentary session hall, Prosecutor General Yuriy Lutsenko demonstrated audio and video recordings that in his opinion prove Saakashvili had received at least 300 thousand US dollars to finance the protests from Serhiy Kurchenko – a notorious businessman of Yanukovych times who is on the wanted list in Ukraine and is currently hiding in Russia.

Is this evidence truthful? Saakashvili reassures that he is not acquainted with Kurchenko and the video is fake.

“They got scared by the last week’s march. Earlier Poroshenko sent to me Granovskyi who was directly threatening me – if I don’t get out of the country and don’t stop talking about corruption, especially in the military sector, they will make up a compromising case and will involve the Security Service,” the ex-President of Georgia said.

Can one believe what the Office of the Prosecutor General of Ukraine is saying? The standoff between the law enforcement agencies in Ukraine is currently escalating, they are actively questioning each other’s jurisdiction as to the investigation of corruption cases. Ukraine’s Prosecutor General Yuriy Lutsenko earlier claimed that some departments of the National Anticorruption Bureau (NABU) are acting illegally.

European and the US institutions and experts predominantly remain on the NABU’s side considering it a more independent institution. For example, Michael Carpenter, former deputy assistant secretary of defense at the Pentagon in the Barack Obama’s administration, and actual Senior Director at the Biden Center for Diplomacy and Global Engagement at the University of Pennsylvania, called the actions of the Prosecutor General’s Office and of the Security Service towards NABU “a disgrace”.

Thus, the fight with the NABU discredits Lutsenko and the office of the Prosecutor General he is heading. So, can the evidence of Saakashvili’s liability be trusted? That is the question the society needs an answer to.

Is the Movement of the New Forces discredited?

At the same time, charges of cooperation with Kurchenko and thus with Russia is a very serious accusation casting a shadow both on Saakashvili and on his political force. Such accusations seriously undermine the reputation of the politician, especially if he fails to disprove these charges.

MP Svitlana Zalishchuk of the Petro Poroshenko Bloc faction, who was supporting Saakashvili as the movement was being created, says:

“If the tapes of the Prosecutor’s Office are confirmed to be credible, it is going to be a huge blow to the democratic forces and people’s trust to peaceful protest. Saakashvili has to give exhaustive answers to all the questions (…) Kurchenko’s money would mean not only a treason but complete undermining of the prospect for the anti-corruption fight in this country, and that would be so convenient for the President.”

MP Mustafa Nayyem (Petro Poroshenko Bloc faction), a member of Eurooptimists interaction group, is of the same opinion. “Mikheil Saakashvili and his team have to provide exhaustive answers to all the questions posed. Keeping quiet in response to the charges of the Prosecutor’s Office is not an option (…) Silence, slogans, and unclear answers are not acceptable. Under the situation of the war with Russia any questions left unanswered, suspicions and facts that fail to be explained would be deadly.”

Time is Saakashvili’s enemy in this case. The longer he avoids the answer, the harder it will be to restore public trust for him.

Why is Saakashvili not popularly supported?

Saakashvili’s rallies have been ongoing for over two months; however, it is now obvious that despite many of his demands and accusations being reasonable, Ukrainians are not willing to support him in the street. Even being irritated by political corruption and slow reform pace, Ukrainians do not see Saakashvili as the head of a new Maidan or a leader to provide effective competition to the authorities in office.

Why is it so? There are many reasons for that. One of these is the lack of trust to Saakashvili’s theatrical manner, the lack of understanding of his true motives as well as the presence of dubious populist politicians (like Yuliya Tymoshenko) beside him. On December 5, a member of the UK Parliament Jane Collins attended his improvised rally. She is a member of UKIP UK’s Euroskeptic party that was the driving force behind the Brexit campaign. Back in 2014, Collins was one of the 137 MEPs who voted against the ratification of the Ukraine-EU Association Agreement. Surrounding himself with such people Saakashvili considerably decreases his chances for support in the Ukrainian society.