Developments on EU’s Eastern Front: Ukraine and its neighbors

Ukraine’s relations with its western neighbors – EU member states, in particular, Poland and Hungary, have recently escalated considerably. While the main reason behind the escalation of the Ukrainian-Hungarian relations is the Ukrainian law on education passed by the Parliament in September, the main trigger of the crisis in relations with Poland is the wars of memory – fights for the past that have been ongoing for over a century now and intensified considerably during the last year.

Nevertheless, in both cases, the reasons behind the conflict between Ukraine and its neighbors seem to be of a somewhat superficial nature, as to some extent they are replacing the actual challenges of efficient and mutually beneficial cooperation with the problematics of the far past and of the language issue.

Two important developments have happened this week that bring an intermediate conclusion to both stories. The Venice Commission did not support Hungary’s claim on the presumable violation of the rights of the Hungarian minority in Ukraine, and the President of Poland Andrzej Duda finally visited Ukraine and met the President of Ukraine Petro Poroshenko. Are these events the long-awaited declaration of peace between Ukraine and its neighbors in the West? Here is UCMC’s take on the issue.

Ukraine and Hungary: the language conflict

A formal pretext for the escalation of the Ukrainian-Hungarian relations was the adoption of the “Law on Education”. About 150 thousand Hungarians currently live in Ukraine. According to the Ministry of education and science, 16,020 schoolchildren receive education in Hungarian.

What is the conflict about? The disagreement was caused by the Article 7 of the Law that cut the term of education provided in minority languages down to the fourth grade of the primary school. Before that, school students were able to get educated in their native language entirely throughout the secondary education stage (at school). According to the new law, starting from the fifth grade all main subjects are to be taught in the official language – Ukrainian. At the same time, no restrictions were imposed as to the classes of the native language itself or several classes in the native language.

Ukraine’s arguments. The law-makers advocated that without knowing Ukrainian children of the minority groups have their rights limited: they have fewer chances to enter a university, get a job, start a political career in Ukraine, or even be able to protect their own interests. The paragraph no.4 of the notorious Article 7 says that one or several subjects can be taught in several languages – in the official one, in English, or in one of the languages of the European Union.

“A stab in the back”: Hungary’s reaction. Nevertheless, the Hungarian government, media, and society had a very strong reaction to the Ukrainian education law. Hungarians are convinced that the law limits the rights of the Hungarian minority (which has been entitled to privileges in Ukraine since the Soviet times) and that the Hungarian schools will be closed down. The Minister of Foreign Affairs and Trade of Hungary Péter Szijjártó called the law “a stab in the back” and promised that the government would block all further decisions of the European Union concerning Ukraine’s approximation with the EU. The diplomatic scandal led to the necessity to address the third party. Hungary filed a claim to the Venice Commission so that this European institution was supposed to put a full stop to this story.

The decision of the Venice Commission. On December 11, the European Commission for Democracy through Law (the Venice Commission) published its decision on the language provisions of the Ukrainian “Law on Education”. The decision turned out to be quite balanced. On the one hand, the Commission recognized that promotion of the state language is a lawful task of the state and even deserves to be praised. The Commission did not support the accusations on the part of Hungary regarding the alleged violation of national minority rights by the article of the education law in Ukraine. On the other hand, the document issued by the Commission provides recommendations for Ukraine including a suggestion to prolong the transition period until 2020 before the article in question comes into full force.  Moreover, the decision suggests holding the necessary consultations with the national minorities as well as to legally ensuring the right to study some subjects in native language so that the minorities would get a high level of both written and oral skills of their native language sufficient for them to resolve complex issues.

Only time will tell whether the decision of the Venice Commission will manage to actually put a full stop to the misunderstanding between Ukraine and Hungary.

Read more: about the education reform in Ukraine, the international reaction to it, and the source of controversies around it.

Ukraine and Poland: fighting for the past

The tension in the Ukrainian-Polish relations has been there for quite a while. Ukrainians point at the centuries of the domination of Poles, while Poles are openly irritated by heroization of the Ukrainian Insurgent Army (UPA) and Stepan Bandera. Ukrainians reprove: Poland stopped being Ukraine’s advocate in the EU. At the same time, the Polish Parliament recognized the crimes in Volyn as “genocide”. It is not as much the history that divides Ukraine and Poland, but historical memory and contemporary interpretation of the past events. Politicizing of the memory leads to the tension in the bilateral relations. 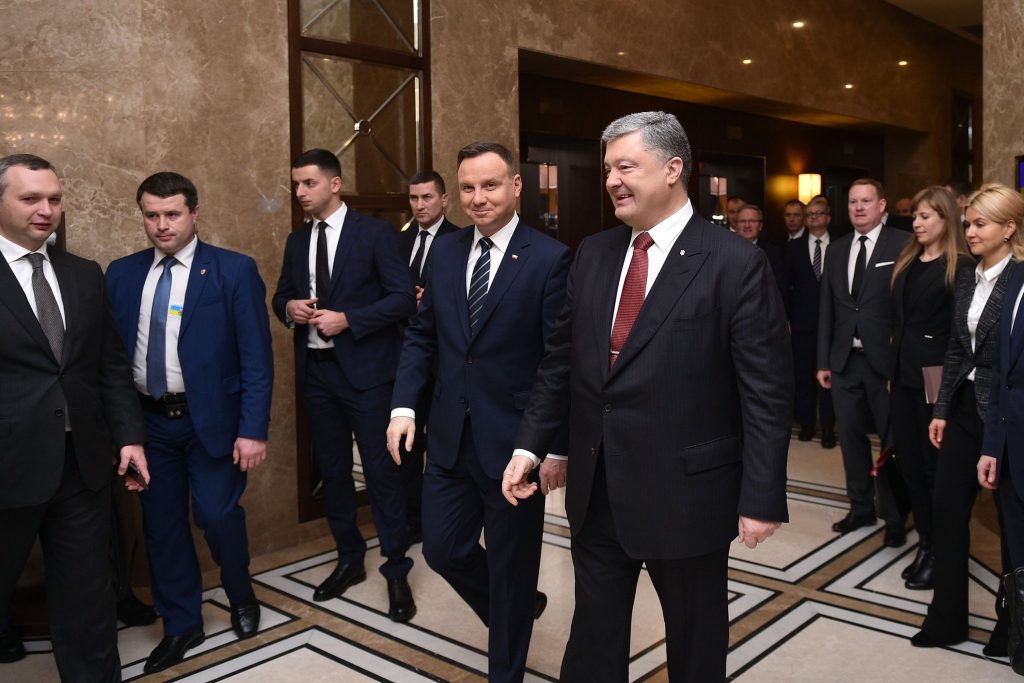 What is the commemoration conflict all about? Poles are irritated by the glorification of Stepan Bandera and the UPA that is being largely put forward by the Ukrainian Institute of the National Memory. Instead, Ukrainians often do not understand why Poles have such a strong reaction to Volyn tragedy. The Volyn tragedy is the name for mutual ethnic cleansing by Ukrainians and Poles conducted by the UPA and the Polish Armia Krajowa in 1943, during the World War II. In 2016 the Polish Parliament recognized these events a genocide.

“The gravestone war”. Moreover, there’s a “gravestone war” between Ukraine and Poland. Since 2014, there is a problem of massive destruction of UPA gravestones in Poland. Polish authorities are not holding liable those responsible for these crimes. In response to that, the Ukrainian Institute of National Memory introduced a moratorium for the exhumation of the remains of Poles killed during military conflicts in Ukraine. It caused a new round of standoff. The agreement to lift the moratorium for the exhumation of the remains of Poles was achieved only in November 2017. The meeting took place on November 17 resulting in Ukraine’s promise to lift the moratorium on the exhumations. This decision opened a possibility for President Duda’s visit to Kharkiv.

The meeting amidst the crisis: Andrzej Duda visits Ukraine. With the diplomatic crisis as a background, the visit of President Duda to Ukraine became a true diplomatic achievement for both sides. Presidents Poroshenko and Duda met in Kharkiv. It is quite symbolic that the visit of Andrzej Duda was linked to the issue of commemoration.

The Presidents visited the memorial to the victims of totalitarianism located on the former training ground of the NKVD (Soviet-time People’s Commissariat for Internal Affairs) outside Kharkiv, where back in 1940 several thousand of captive Polish officers were killed and buried among other victims.

What they agreed upon. The Presidents agreed to step up the level of the bilateral commission on the issue of burials. It will be headed by the Vice Prime Ministers: Pavlo Rozenko on the Ukrainian side and Piotr Gliński on the Polish side. It is worth noting that unlike his Ukrainian counterpart Andrzej Duda devoted most of the time in his speech not to economics but to historical matters. At the same time, Duda sounded more than optimistic and stated that the key obstacles for the historical dialogue of the two states had been removed.

It is possible to stop the war of memory between Poland and Ukraine. To achieve this, they need to stop fighting for the past and think about the present or better about the future. By leaving past in the past and history to historians, Ukraine and Poland have more chances to get along.

Will the Kharkiv accords motivate the two states to leave historic disagreements behind and to concentrate on the challenges topical to both countries instead? We will have the answers to these questions in the nearest time.

Read more: Why the relations between Ukraine and Poland are that sophisticated?