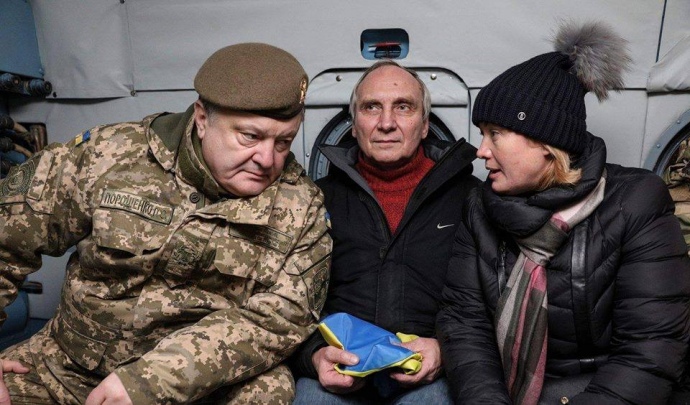 On December 27, 2017, Ukraine exchanged prisoners with Russia-backed militants for the first time in the past two years. Among the liberated Ukrainians was the 63-year old scientist, professor, and activist Ihor Kozlovskyi. Throughout the two years of captivity, he was forced to spend in inhumane conditions – in a Donetsk prison cell without windows for those sentenced to life, Kozlovskyi also underwent torture. Following his liberation in course of the prisoners’ exchange, Kozlovskyi was interviewed by many Ukrainian media. His testimony sheds light on what the life in the occupied territories is. UCMC publishes an abbreviated translated version of the interview Kozlovskyi gave to the online media “Ukrainska Pravda”.

Kozlovskyi graduated as a historian in Donetsk in 1980, in 2012 he defended his Ph.D. thesis in religious studies, then used to be a professor at the Donetsk national technical university at the philosophy department. He continued his teaching and scientific activities under the occupation in Donetsk. He was traveling back and forth to the government-controlled area, to conferences in Kyiv and the displaced University of Donetsk based in Pokrovsk. Kozlovskyi’s wife with their younger son and his family moved out of Donetsk back in 2014. The scientist stayed under the occupation with the older son who has a disability. The transportation of his son confined to bed was too hard to organize. Moreover, Kozlovskyi confesses that he was staying there as he believed in the liberation of Donetsk by the Ukrainian military. On January 27, 2016, in Donetsk an unknown person made an attempt to blast the monument to Lenin. It became a pretext for the “detention” of Kozlovskyi. He was held for a month in the basement of the so-called “Ministry of Security” of the “DPR”, later he was moved to the Donetsk detention center. Only a year later the “case” of Kozlovskyi was passed “to the court” and was assigned to be considered by the “military tribunal”. On May 3, 2017, Kozlovskyi was sentenced to 2 years 8 months as an “untrustworthy citizen”.

Ukrainska Pravda: In your opinion, was there a chance to stop everything back in spring 2014? Did the buildings seized by the militants have to be taken by storm?

Ihor Kozlovskyi: There was a chance. Yes, they were to be taken by storm. I realize that the law enforcement to a large extent betrayed Ukraine back then. However, there were several military bases in Donetsk, and they were to be used.

UP: Do you now believe in the efficiency of reclaiming Donbas by force scenario? Should the area be liberated by force or, on the contrary, the only right way is that of achieving an agreement?

IK: It is not a matter of belief. It comes as a result of comprehensive efforts that also include the participation of the big states. Many factors at various levels play their role in it. On the one hand, we need to form a powerful army to demonstrate our force so that the opposite side understands – we do not give up the forceful scenario, and our army may take the region under its control at any time.

One day is enough to get, say, Horlivka back under control. In three days, it is possible to de-occupy the entire region by force. On the other hand, it will lead to casualties, destruction, and the negative international response. These are all humans who live there.

Thus, we know that during the World War II when liberating a certain area Soviet troops were causing more destruction than Germans did, and there were mass casualties. But no one cared because the task they had was different. We cannot do the same, we live in the 21st century. People over there are our people and it is our land. Even though these people might be thinking in a different way.

That’s why the wisest option is a constructive dialogue. The process of the dialogue must be ongoing permanently and not only at the level of the authorities under the Minsk format but also at the personal level. If anyone has people they know there, they need to talk to them. It thus has to be a dialogue that would embrace the entire Ukrainian society. At the same time, I repeat, it is important to be forming a stronger army simultaneously with this process.

UP: Your forecast is that returning the occupied territory in Donbas may protract for long?

IK: It is a problem that is going to take some time. Even if we have this territory fully liberated, and we get to our border, and it stands as the main goal – to close the border, people who are staying there are already thinking in different concepts. Try and understand them: they have their houses destroyed, they lost their beloved ones. And this problem will stay for a very long time. That’s why de-occupation concerns not only the area but also the minds of the people.

UP: According to your observations, do the people who have strong anti-Ukrainian beliefs, following four years of the occupation, still are the critical mass?

IK: There are three positions there. First one is pro-Ukrainian. However, the number of these people decreased over the past years as many of them have left the region. The second one is the position that supports the “DPR” or becoming part of Russia. These people are many. But the majority is formed by the indifferent mass that would like to just live in peace and well-being without shooting. And it is this mass that will be subject to the major influence. They will join anyone who will offer them peace and well-being. If Ukraine develops and shows a different example of how it treats its people, if its well-being keeps growing, it may become the factor of influence upon these people.

UP: Following this logic, what is your opinion on the use of the trade blockade with the occupied territory as well as of the Ukrainian government ceasing the payment of social benefits and pensions?

IK: People have earned these pensions. If they had left Ukraine, our state in accordance with the law would be paying them these pensions. In this case, the people did not even leave. Generally speaking, any blockade pushes away. It is also turning indifferent people to the supporters of Russia. As in its turn Russia is opening its borders and giving them a chance to go there and find a job there, they recognize the “passports” of the so-called “DPR” and “LPR”. By now they have simplified the procedure of getting the Russian citizenship for those who come from the occupied Donbas. The blockade from the Ukrainian side would be a logical step should the Russian border be closed. In that case, the militants would have to accept our conditions. In its current form, it is not a blockade, we are just pushing the people away.

UP: You were helping other prisoners to keep their morale strong in captivity. What can help one survive in captivity and not go crazy?

IK: It is love for your close ones and family. Rich inner world helps as well. If a person has a small inner world, it is very hard to live through it. There were the ones who could not stand it. Thus, they put a prisoner to our building, the reason was he was leasing an apartment to the person who was earlier “arrested” for espionage. The landlord was promised life sentence. I saw him in spring and four months later I learned that he took his own life.

The conditions were oppressive: a small cell no wider than open arms. It was the building no.10 where back in the Soviet times those sentenced to death were kept, later it was the place for those sentenced to life. Thanks to prayer, meditation, and yoga I was entering a certain inner world. I was training the others to do that, I showed them breathing exercises and was providing overall psychological help to them. Key is to set the task for yourself to survive at any price.