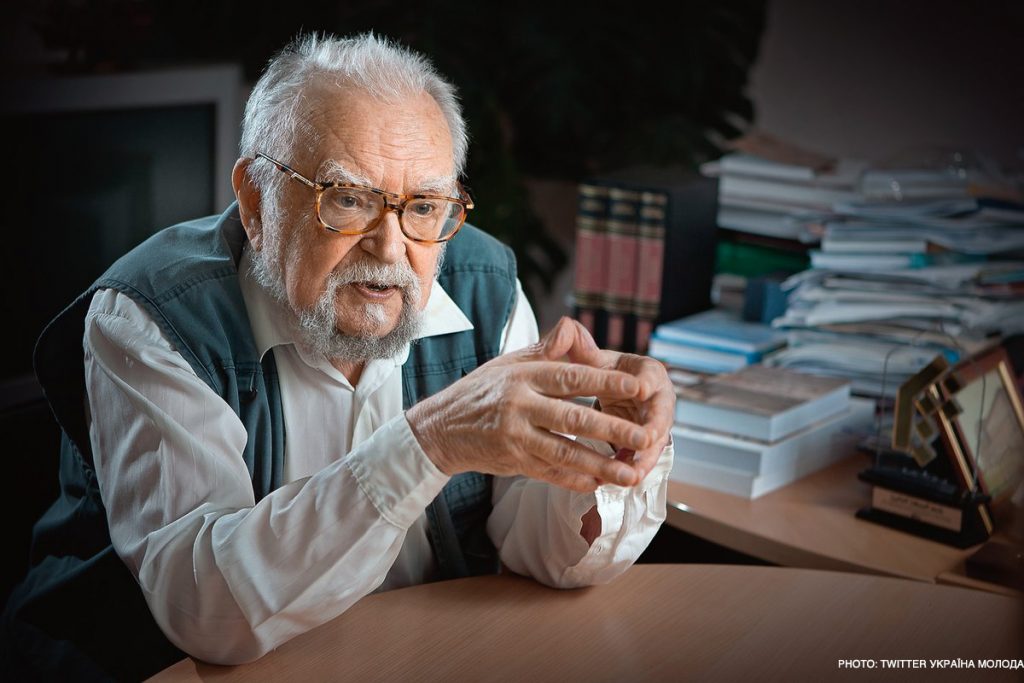 On February 10, 2018, Ukrainian philosopher Myroslav Popovych passed away at the age of 87. Academician, director of the Ukrainian State Institute of Philosophy, author of the book “The Red Century”, thinker of a large scale, Myroslav Popovych was at the same time a person of unbelievable modesty.
There were times when he used to work as a teacher in a village school, now the President came to pay his last respects to this man. Journalists used to call him “a sage with the smile of a child”, while Ukrainian politicians used to seek advice from him. He was called “the consciousness of the nation” as well as a moral opinion leader. He was frequently seen on Maidan – Ukraine’s central square, during the Orange Revolution of 2004 and the Revolution of Dignity of 2013-2014. It is now being suggested to rename after him the street on which the philosopher used to live.
UCMC herewith casts light on who Myroslav Popovych was, what his key ideas are, and what Ukrainians will remember him for. 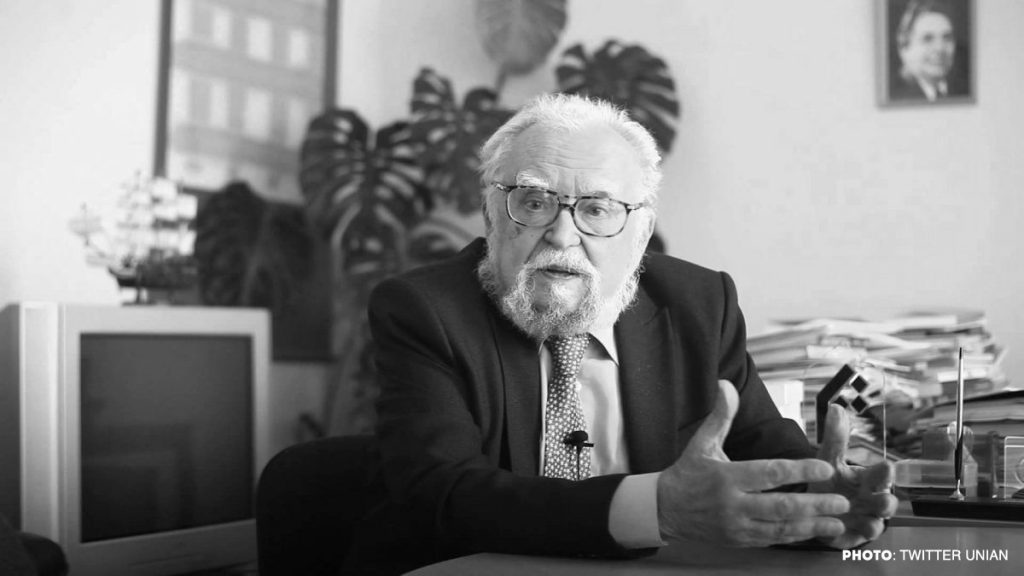 Short biography. Myroslav Popovych was born in Zhytomyr in 1930. In 1948-1953 he studied philosophy at the Kyiv University, later he worked as a village school teacher and a village school director. He received his Ph.D. following the postgraduate studies at the Institute of Philosophy in 1956-1959, at which Popovych worked until his death thereafter. Being a member of the Communist Party he got to chair the first central office of the party “Narodny Rukh Ukrainy” (Ukraine’s People’s Movement) in 1989. He was one of the participants of the “December 1” group starting from 2013 (a group of Ukrainian intellectuals established on the 20th anniversary of the referendum of Ukraine’s independence in 2011). Myroslav Popovych was the author of about 400 scientific works including 21 monographs. His most well-known scientific pieces that also became known to the wide public are “Hryhoriy Skovoroda” (1984), “The mindset of ancient Slavs” (1985), “Mykola Gogol” (1989), “Ukraine and Europe: right and left” (1996), “Essays on the history of the Ukrainian culture” (1998), “The Red Century” (2005) and “Being a Human” (2011).

“The Red Century”: what the XX century was like

“Its name [the name of the book “The Red Century” – UCMC] does not imply that the past century was red; it was colorful and ended up being extremely motley. I was writing this book about the red century as for the majority of us it was mostly so.
To me, as to its author, that century is my life. I remember the biggest part of it, while the life of my father and mother started almost simultaneously with it. There will be authors that will know better than I do what was happening between the beginning and the end of the XX century. However, my advantage will always be that I used to live at that time and took everything to heart.” (An excerpt from the piece serving as a preface to “The Red Century”, 2005). 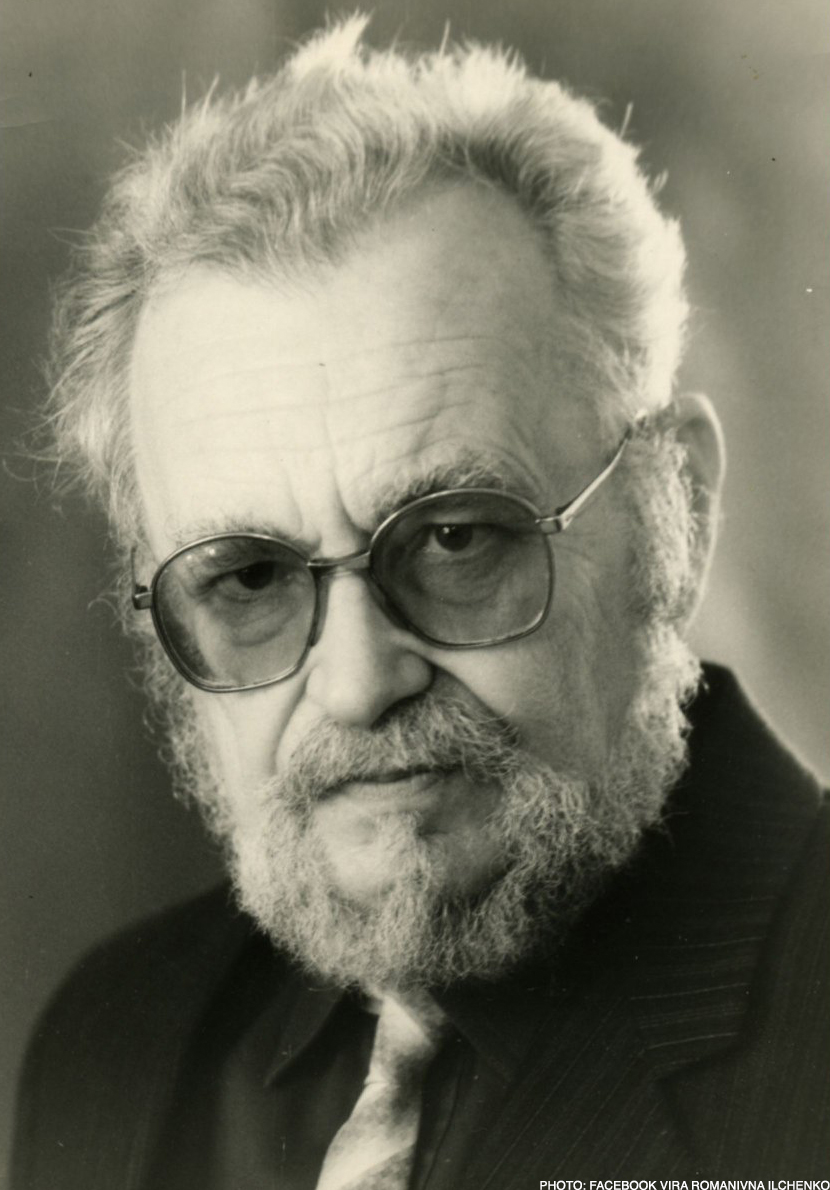 Ukrainians about Popovych. Philosopher Volodymyr Yermolenko: “This book (‘The Red Century’ – UCMC) is what they call the book in English: if you have time to read just one book on the history of communism, then ‘The Red Century’ is your best choice. Such books are wise and detailed but do not require any specialized preparation: these books are open to everyone regardless of reader’s interests or educational background.”

“The Epoch of Good”: on Ukraine’s contemporaneity

“There come entire epochs when the good becomes ‘contagious’. I think we live in such an epoch.” 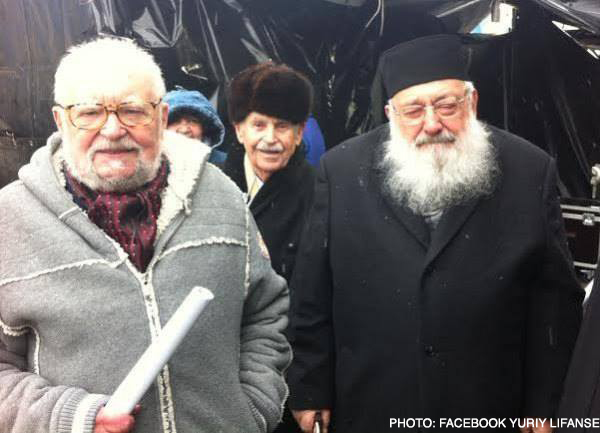 “I am not a nationalist, neither do I continue the OUN* course, neither am I a supporter of Bandera nor Melnyk. However, Ukraine is facing the national-liberation task, and people of different orientations have been taking part in this battle, thus one needs to take it into account when assessing the events.” (An excerpt from the interview of 2005).
*OUN is the Ukrainian abbreviation for the Organization of Ukrainian Nationalists

On Maidan and the Revolution of Dignity

“Maidan did not just overthrow the government like, for example, the Revolution on Granite and the students’ strike of 1990 ended up with just one government being substituted by another, while nothing at the core actually changed. Maidan, on the contrary, changed Ukraine’s political system. And it can never be eradicated. When we came and stood there saying: ‘I will not walk away until…’, we never thought it might grow into such a large-scale political act, undoubtedly, out of nothing. If we speak about the consequences, about how protracted this movement towards democracy is going to be… I would be very cautious in saying anything certain.” (2015) 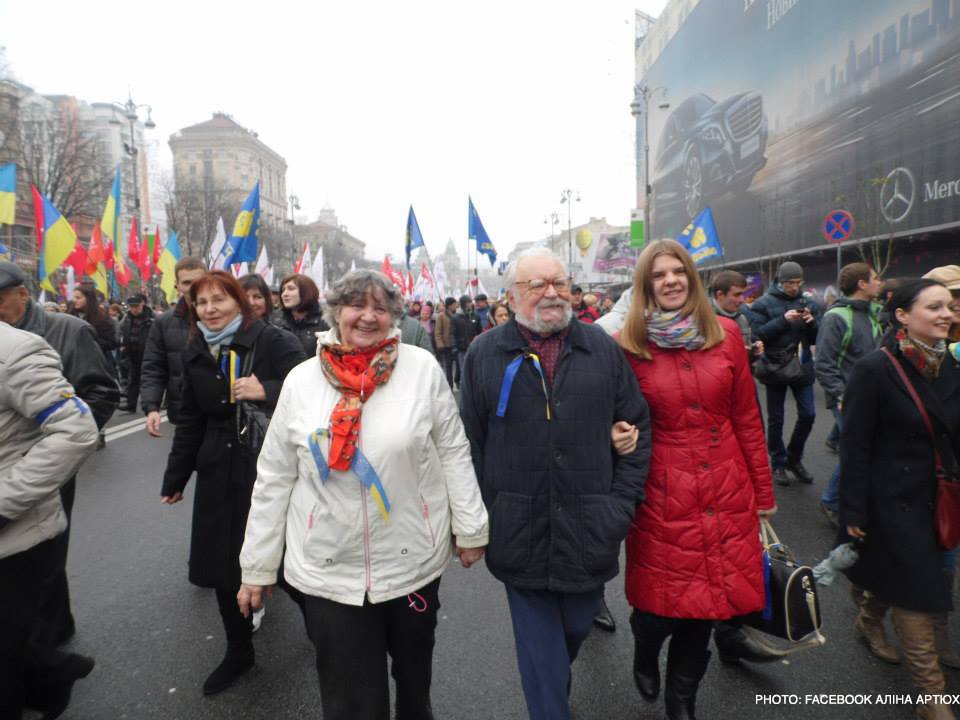 “Back then I used to support Poroshenko as a candidate. I was writing up appeals so that people vote to have the victory in the first round of elections already. I do not regret it. But I am now concerned if he copes with this burden. As the danger of the burden of power is that it crushes a person from the inside…” (2015)

Ukrainians about Popovych. The President of Ukraine Petro Poroshenko: “To me today it’s not just a loss of a big Ukrainian and an outstanding state actor. I can say that to some extent Myroslav was my teacher.”

On Russia, the empire, and Russian friends

“If Ukraine heads to Europe, those former republics should be crossed out as well, as they will follow us. And Russia understands that. As Nicholas I [of Russia – UCMC] used to say: I could let Poland go, but I would never let Malorossiya leave. ‘Malorossiya leaving’ from under the empire’s wing would mean the end of the empire. And this issue is not just topical, it is exactly at the heart of Putin’s entire politics.”
“The Russians with whom we used to drink tea in the kitchen in the 1970s are still my friends today. It is quite possible they do not realize what sense independence makes, or they now possibly do because they have seen Putin. However, the majority of Russians are far from understanding their tragic positioning. They can be only sympathized with, same as Germans could have been, by the way. When the fascists [the author means National Socialists here, it is a typical tongue-slip in Ukrainian – UCMC] acceded to power, only a third of the population voted for Hitler. Well, it turned out that if one-third supports a chauvinistic doctrine, it is enough.” 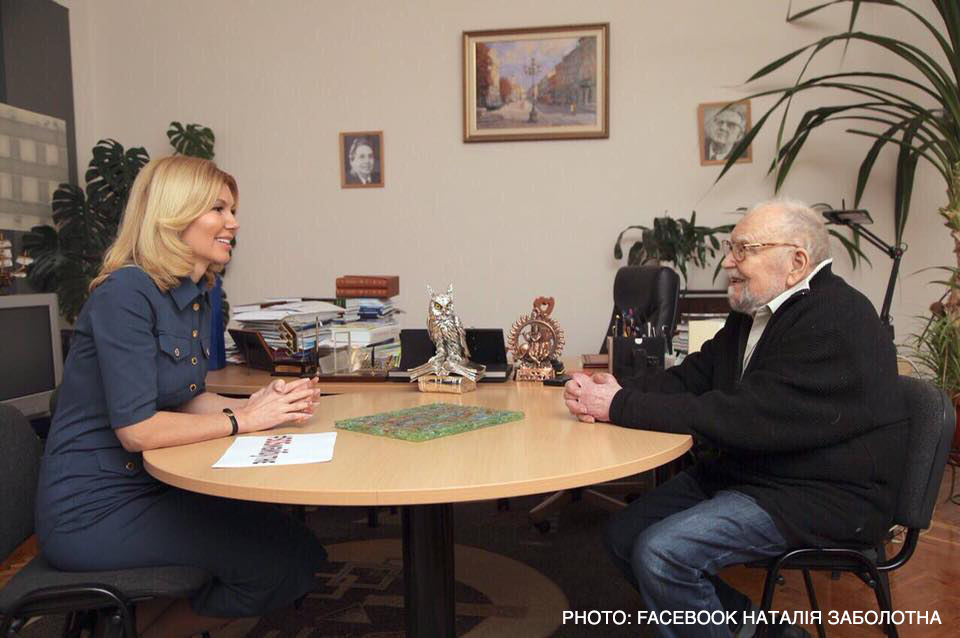 What the war in Donbas is fought for

“Today we tend to sometimes forget that the actual war is a war of principles. We do know – and it is true, that the war is on between Russia and Ukraine. It is an undeclared war, but we all know what it is about. All the controversies we have ever had led to this, and this is the dangerous part: it is not about the language or even independence – it is not what’s at stake, instead, we need to build a society with a human face.”

On decommunization in Ukraine

“Implementation of the decommunization laws needs to have a delicate pace. It should not be a show – like those acts of toppling. Dancing on a toppled monument is not that far from dancing on the dead bodies. It should not be done like that. It is a barbarian way to destroy the barbarian way of thinking and the barbarian mindset.”
“In the end, there was the state, and we used to be the citizens loyal to that state. Labeling any cooperation with this state being collaborationism – what some of those interpreting this series of the laws on decommunization tend to do, and having us all declared collaborationists means having us all sent to jail.”
“I used to be a member of the Communist Party of the Soviet Union (KPRS), but in the end, the dictatorship of the criminal-political communist gang was to a large extent overthrown with the efforts of such KPRS members as me. This means that new trenches should not be dug here.” 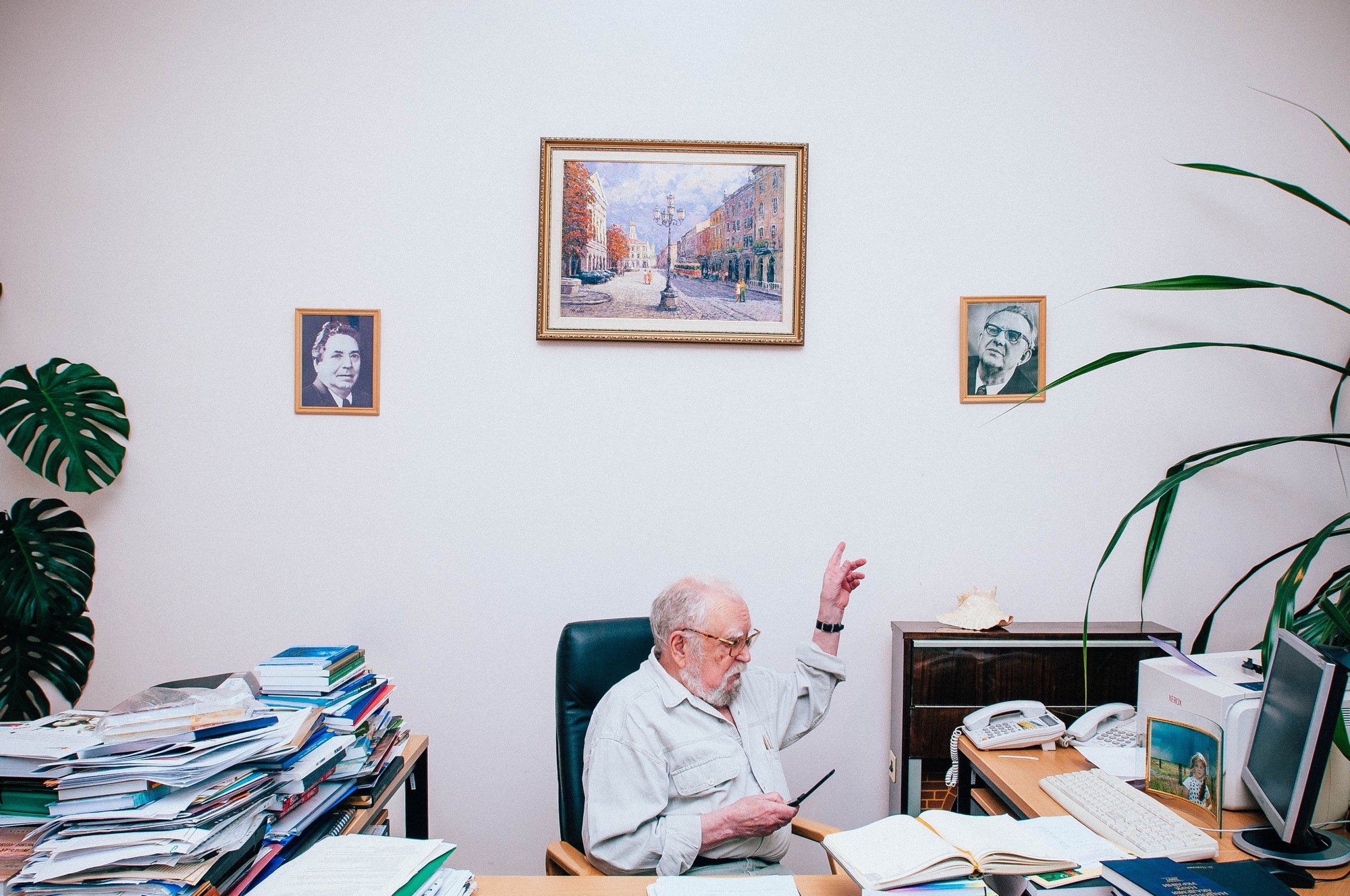 Ukrainians about Popovych. Sociologist Iryna Bekeshkina: “These days the former Soviet Union is often being portrayed in one grey color – there was nothing positive back then, and people were absolute ‘soviets’. Why then the USSR collapsed so easily? Yes, there were people who were openly fighting the Soviet system, but they were very quickly isolated from the society, they were put in jail and their voice was heard louder abroad than in Soviet Ukraine. At the same time, there were people who were not openly opposing the system, but day after day, by the mere fact of their existence and with the impact they had upon their environment, they kept undermining the rigid, dogmatic and pathetic Soviet system.”

“Every day and every hour we are facing the unsolved problems that threaten to bring our state to a collapse. Trying to suppress the evil, we create new evil. We are witnessing self-destruction of the state. This statement is topical today, it was topical a month ago and, unfortunately, quite likely will be topical a month from now. (…) The main reason behind the threat that is casting a shadow over Ukraine is the lack of trust in the national consolidation.
It is important that everyone formulates their position and does not hide behind the back of their colleagues. As Martin Luther said: ‘Here I stand, I can do no other’. Life is given to a person for a reason. The truth wins anyway. What seems to be said to the wind, will find a way to grow from a seed – in an absolutely unimaginable manner, through some action.” 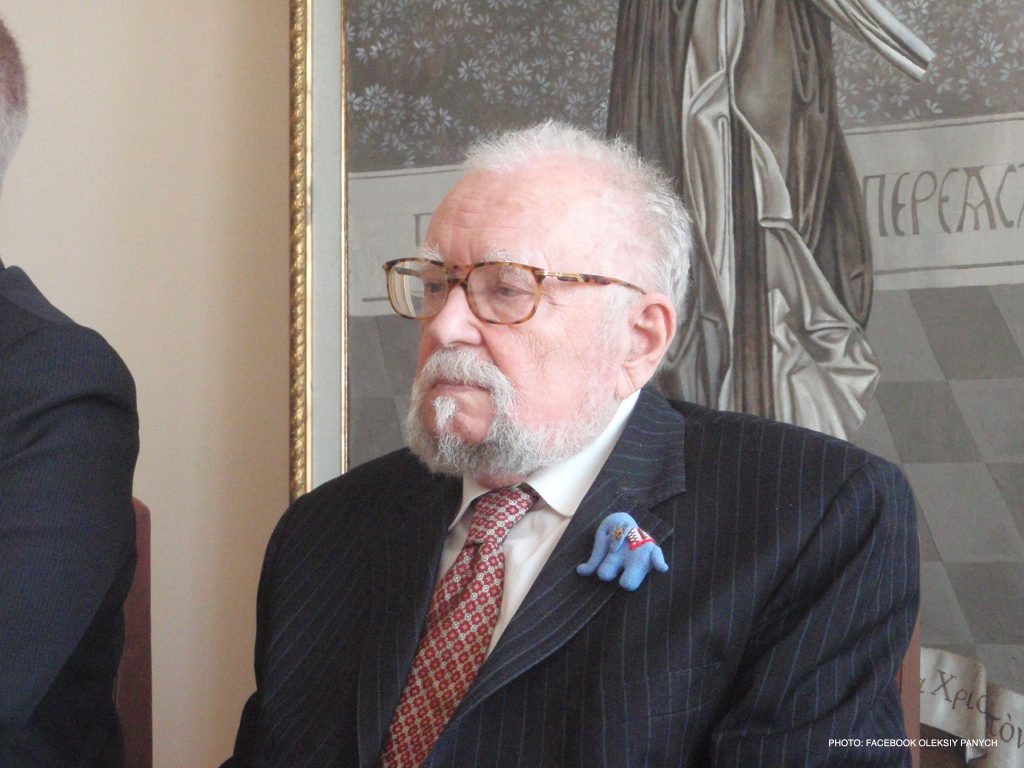