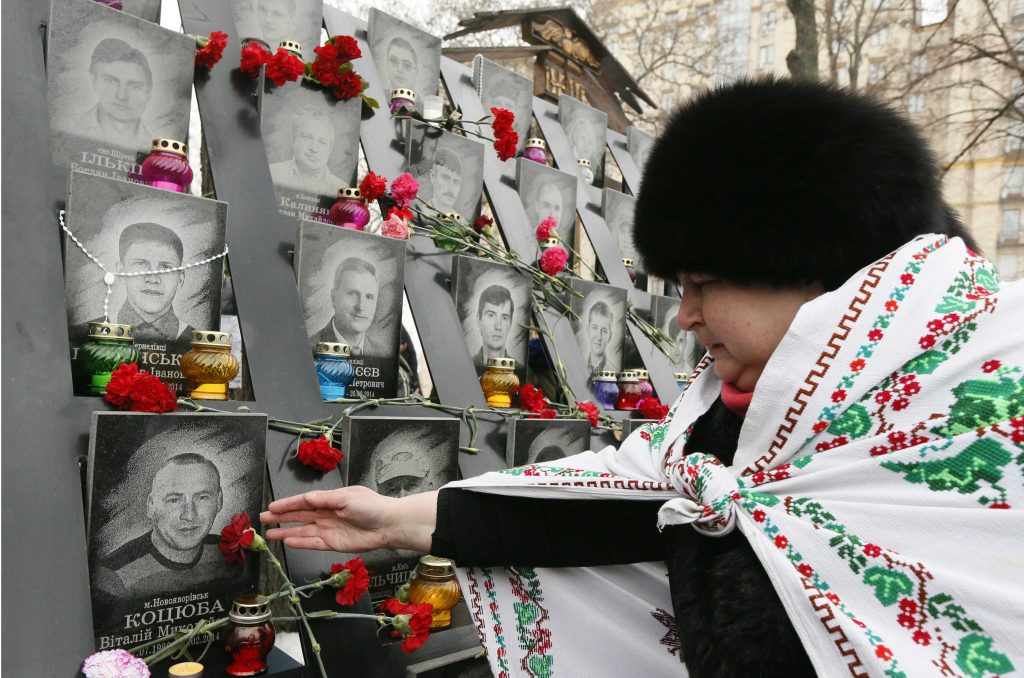 A woman takes part in a commemoration ceremony at the monument to the so-called “Nebesna Sotnya” (Heavenly Hundred), the people killed during the Ukrainian pro-European Union (EU) mass protests in 2014, in central Kyiv, Ukraine, February 18, 2017. REUTERS/Valentyn Ogirenko

The original article was published by Atlantic Council in the UkraineAlert blog.

On February 18, 2014, the most tragic part of the Revolution of Dignity started; more than one hundred people were killed, several dozens went missing, and over a thousand were wounded in Kyiv on February 18-20.

Yevhenia Zakrevska, the leading lawyer of the so-called Heavenly Hundred families who lost loved ones on the Maidan during this period, gave a detailed interview describing the status of the cases.

What needs to be investigated? All of the crimes committed during the Revolution of Dignity have been consolidated into one solid “Maidan Case” that comprises 89 criminal proceedings in relation to the killings of 91 persons (78 protestors and 13 law enforcement officials).

Why do the cases get stuck in court? “A big part of the cases have been passed over to the court, however, the cases…get stuck at the preparatory hearing stage,” Zakrevska explains. The court has to decide if the indictment corresponds with the law. The procedure should take up to fifteen days, but in reality it may take years.

“Protracted justice”: how it works. “The judges are not too enthusiastic about taking up these cases as they are complicated, contain many episodes, and feature a lot of actors. The defendants’ lawyers make use of this and always lodge every claim they possibly can—they ask to dismiss the indictment, close the case, change the jurisdiction, in a nutshell, they are using all the procedural steps there are. It is often simpler for the judges to take no action at all and just send the indictment back to the prosecutor’s office. And then it goes into an endless procedural loop.”

How is judicial reform affecting the investigation? A decrease in the number of judges represents a particular problem. “At some courts, the number of judges has decreased twofold, sometimes threefold. The thing is, many judges have had their terms expired and they are not being prolonged, a stand-by that is probably happening while one waits for judicial reform to come. Moreover, a decree has been issued on the dissolution of district-level courts, including the courts considering the Maidan cases. If no changes are introduced to the legislation, the new courts to be established…will have to start re-considering all the cases that have not been finalized from the very beginning, engaging new judges.”

In which cases have court sentences already been issued? Kharkiv Berkut Officer Andriy Yefimin was charged for assaulting activist Serhiy Didych on February 18. Yefimin hit Didych on the head with a bat, which caused Didych to fall under a moving truck, killing him. The court sentenced Yefimin to a five-year suspended sentence. Another closed case is that of the murder of Vesti journalist Viacheslav Veremiy on February 18; Yuriy Krysin was charged with coordinating the “titushky,” (paid thugs) who allegedly killed the journalist. However, the sentence is being appealed.

Which cases are progressing? The case of the killing of activists on February 20 on Instytutska Street has made it halfway through. Two other cases of activists who were killed on February 18 are moving forward; the two proceedings regarding the breakup of a student rally in November 2013 is also moving along. The case of torture at the Dynamo stadium is being actively considered. There are several suspects: former Kharkiv-based Berkut staff Vladyslav Mastega, Artem Voilokov, and Andriy Khandrykin. Mastega and Voilokov fled to Russia in 2017.

How many people have been arrested? Five Berkut staff are under arrest for the February 20 murders on Instytutska Street as well as the former commander of the 2nd Company of the Kharkiv-based Berkut Viktor Shapovalov for his role in the events of February 18. The list also includes former Security Service official Oleksandr Shchiogolev who was allegedly in charge of the so-called “anti-terrorist operation” on the Maidan and “titushka” thug Oleh Shadrov charged with attacking Maidan activists on February 18-19.

How many fled to Russia? Twenty-One Berkut officers charged with killing Maidan activists on Instytutska Street on February 20 received Russian citizenship and some are even working in Russian law enforcement. Four more Berkut staff—Kharkiv-based officers who had been arrested and later freed—are now in Russia, too.