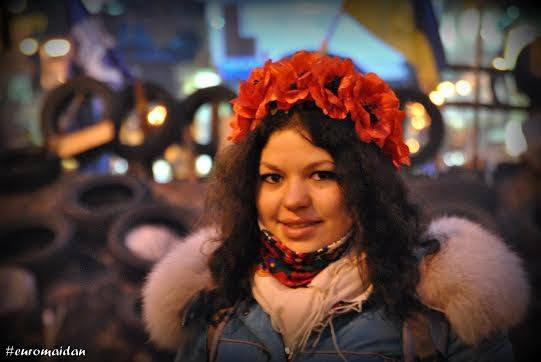 The whole country remembers her face: 21-year old Olesia Zhukovska was that young volunteer medic who received a gunshot wound on Maidan on February 20, 2014 – on the most tragic day of the standoff between activists and law enforcement. She has miraculously survived, unlike dozens of other activists who died of gunshot wounds that day. While inside the ambulance she posted a goodbye message on social media saying: “I am dying”. Luckily, the girl survived.
UCMC spoke with Olesia four years after that tragic day asking her how she remembers February 20, 2014, as well as what her life turned to be like afterward, what her today’s dreams are and what she thinks about the changes in the country.

“For me, there were two Maidans: a kind, bright, and peaceful one, and a bloody and dark one…”

Olesia Zhukovska was born in Krements, Ternopil region, in western Ukraine. Her father is an animal farm worker, her mother is a nurse. She graduated from a medical college in Kremenets and started working as a nurse.
She first came to Maidan on December 4, 2013. She was staying in the tent city and in the buildings of the Trade Unions House and of the Kyiv City State Administration the protestors had seized. Olesia was a volunteer paramedic, on Maidan she was making medical shifts, bringing the medicine to those who needed it as well as consulting the patients at a medical point set up at the Kyiv city state administration. She turned 21 in January 2014. 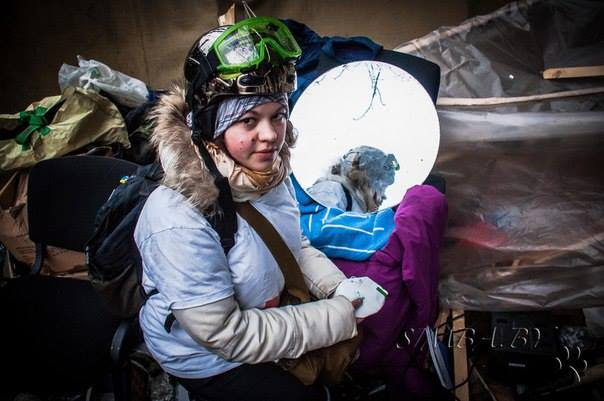 “Another photo I rediscovered that was made several hours before the shot”, Olesia Zhukovska’s Facebook post of March 31, 2014.

“Olesia, 21 years old, from Kremenets, Ternopil region. She came to Maidan on December 4. She was the only girl alongside 16 guys on the bus heading to Maidan. She knew no one. Last time before that she was in Kyiv when she was an eighth-grader. She was very much indignant at the beating of students by the Berkut riot police on November 30. The first time she came for five days and was just talking to people. Throughout all that time, Olesia was traveling back and forth to Kyiv from home more than ten times. She actually lost count. She volunteered in the kitchen, on December 31 she started being a volunteer medic. The girl has a college diploma of a medical assistant. On January 19 she worked at Hrushevsky street, exactly when the situation escalated.

“‘At night, on January 20, a stun grenade fell beside me, it stunned me a bit. It was the first time I got really scared,’ she says.”

“For me, there were two Maidans: a kind, bright and peaceful one, and a bloody and dark one ..,” Olesia Zhukovska wrote on Facebook on November 17, 2014.
On Maidan she made friends and found like-minded people, she was leaving it only at times when she had to go home, mostly to get treatment, as the nights spent on Maidan resulted in her getting a cold or tonsillitis. In February 2014, Olesia went to a hospital, she checked herself out of the hospital three days before February 20.
“During her volunteering times, Olesia met many people. With a special warmth, she speaks about the ‘hell’s barrel’ near the column. It was a tent, a warm-up point. People from different regions came there – from Luhansk, Zaporizhia, Poltava, Ternopil. When the February 18 events commenced, the tent got burnt down.
Olesia got ill several times, she had tonsillitis and a cough. She was going back home to get treatment, was getting better and went back on Maidan. On February 17 she checked out of the local hospital and the next day departed to Kyiv. On February 19, she was already on Maidan, she was on shift all day and all night long until4am.

“‘I just came and I wanted to do more,’ Olesia explains.” Kristina Berdynskykh, journalist, author of#maidaners project on the Maidan activists. 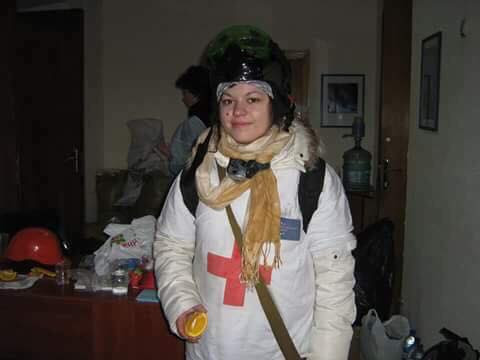 “I got this photo sent to me today for the first time. February 19, 2014. This is the medical point on Prorizna Street. The photo was taken by Mykola Vlasenko – medic at the two Maidans and medic in the combat zone.”  Olesia Zhukovska, Facebook post of February 20, 2018.

“I was holding the wounded artery with my hand”

On February 20, Olesia woke up in the morning and went to the Mykhailivsky [St. Michael’s Golden-Domed Monastery – UCMC] to pick the medicines – she wanted to take it to the medical point by the Christmas tree. On her way back from the Mykhailivsky she stopped by the Lyadski gates on Maidan as she met her friends from the “hell’s barrel”. She looked at her watch, it was 11.37. At 11.40 she got shot by a sniper.

“We did not know exactly what was going on on Instytutska street. I was the first to get wounded in that location. I did not understand what was happening. The guy standing opposite from me told me: ‘Sweetie, you got wounded.’ Then I put my head down and realized that my coat got steeped in blood from the top to the bottom in a second,” Olesia told in a commentary to UCMC.
“I did not faint for a second, there was an ambulance car standing nearby. The guys walked me to it supporting my arms. As I was walking, I was holding the traumatized artery so that the blood would not come out. I got into the ambulance and sent what I then thought to be a ‘goodbye message’ from my phone.” Today Olesia is laughing as she remembers that moment. Back then the message flew around the world, while her photo made shortly after when she was wounded and the two words on the social media were quickly picked by nearly all international media.” 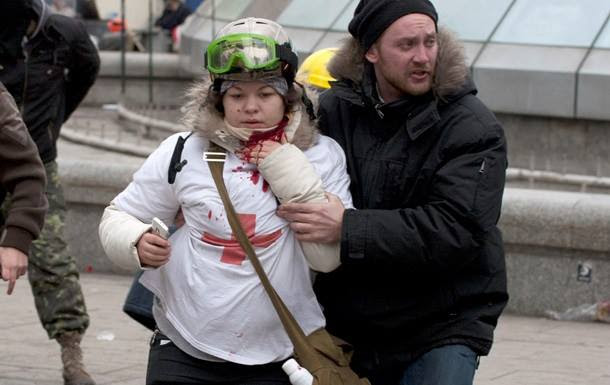 “We have to fight! It’s our country!”

After the injury Olesia was operated, she stayed at the Kyiv hospital no.17 for 11 days. Luckily, the bullet did not hit the carotid artery. On March 2 she ran away to Maidan again.

“I am going to Maidan today, I can’t just be staying at hospital listening to the news, I will go to Maidan, at least for a little while! We have to fight! It’s our country!” she wrote on Facebook on March 2, 2014.

Later, after she checked out from the hospital, she visited France as part of the mission headed by Petro Poroshenko on March 7-13. During the visit, she met the President of France François Hollande.

“Right after the injury, I went abroad, to meet the President of France François Hollande. My mission was to testify what happened on Maidan,” Olesia told UCMC. 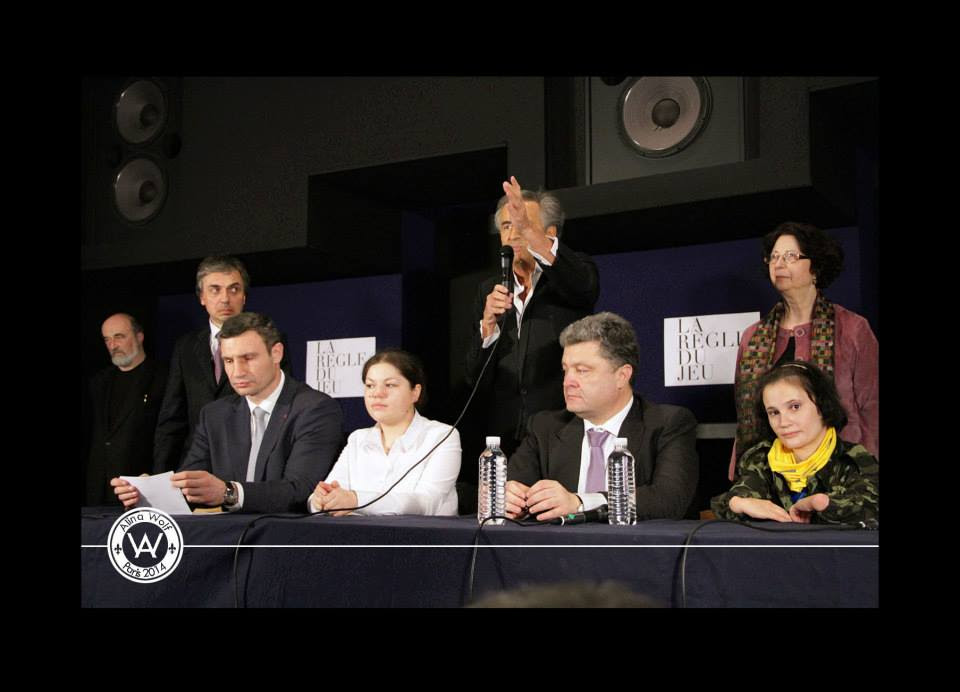 The investigation as to the killings on Maidan started straight away, however, it has provided no convincing results or, most importantly, sentences or actual imprisonments, even four years after those events. [Read also:“Four Years after the Maidan, How Is the Investigation Going?”] Olesia, same as other victims, was testifying. “There was an investigation. Six months after I was summoned by an investigator, then by another one. I was testifying, same as everyone else did, helped with investigative experiments. I was told that it was a Berkut policeman who had shot me and who then fled to Russia and that the weapons were destroyed. I did not even memorize his surname,” the girl said. It does not look like Olesia is into taking revenge on her abuser. She is just on to another day.

After the Maidan, she decided to seriously dedicate herself to medicine. Before the Maidan events, a graduate of a medical college, she used to work as a medical assistant in the village, but actually wanted more. In summer 2014, she entered the Bohomolets National Medical University in Kyiv and has been living in a student’s dormitory since then.
Despite the widespread information on the corrupt nature of medicine in the country and the medical education, in particular, Olesia entered the university without any problems, to study free of charge. She was accepted straight to the second year of study, as she was already in possession of a basic medical degree. It may well be that having become recognizable in the country after her injury on Maidan, it played to her credit in course of the selection, but Olesia is not aware of it. She says she has not been facing corruption in the university. “My classmates are all contract-based students [who officially pay for their studies – UCMC], the marks they get are the result of how they study,” she says.
Olesia finds studying exciting, but it is quite demanding. She is in her fifth year now, there’s one more year to go, and the compulsory internship afterward. She has little free time left, but in four years she took part in many volunteer projects. “Whenever I have spare time, I go to animal shelters, to the military hospital. With a friend of mine we also went to help weave the masking camouflage nets for the military,” she says.
Neurology and gastroenterology are the medical branches that she is most attracted to. “My dream is to become a gastroenterologist, a nutritionist,” Olesia says.
The girl got seriously keen on eating healthy and on a healthy lifestyle, over the last year she herself lost 16kg. She says she is not planning to stop there. “It was hard to get started, and it is hard to continue, it’s a big job, well, what can I do, I actually like it.”
“I love myself and I want to be a better version of myself,” she explains. 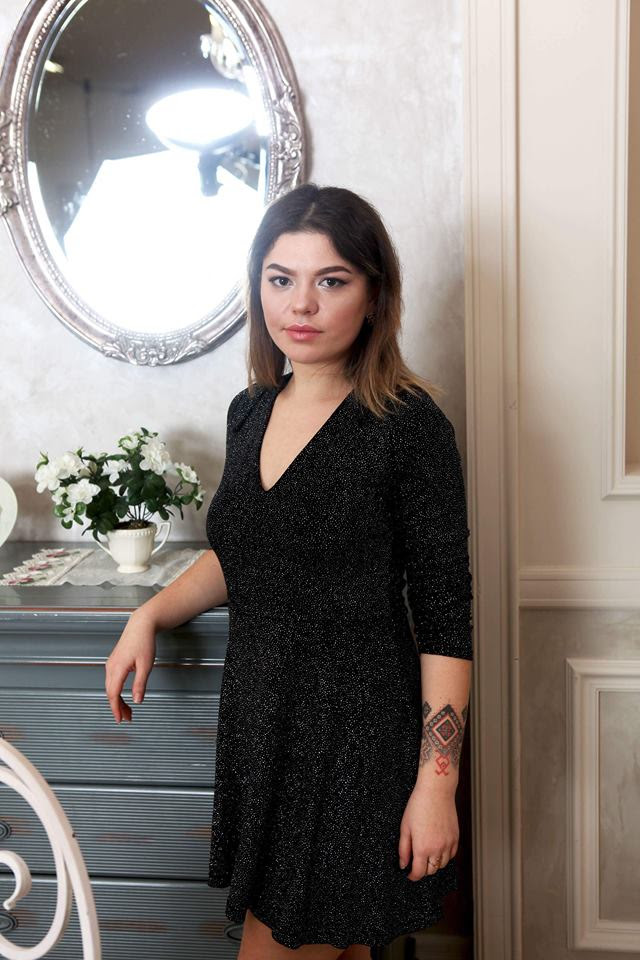 Olesia is 25 now. Every year, on February 20, journalists write her and recall the events of this day four years ago. Olesia says she is flattered that they remember her, but does not really like to give interviews.
She does not comment on the Ukrainian reforms and preferred not to say whom she plans to vote for in the upcoming elections. “Of course, there is disenchantment and sadness, but I think, everything must not happen at once. We did our internal revolution, while the aggressor state attacked us. Who could have foreseen that?” she says.
The girl considers the date of February 20 to be her second birthday and has no regrets about anything. “I have no regrets, I regret neither coming to Maidan, nor my injury. It is an important lesson to me. When I took to Maidan, I wanted the changes in the country and in my life. It is exactly what happened.