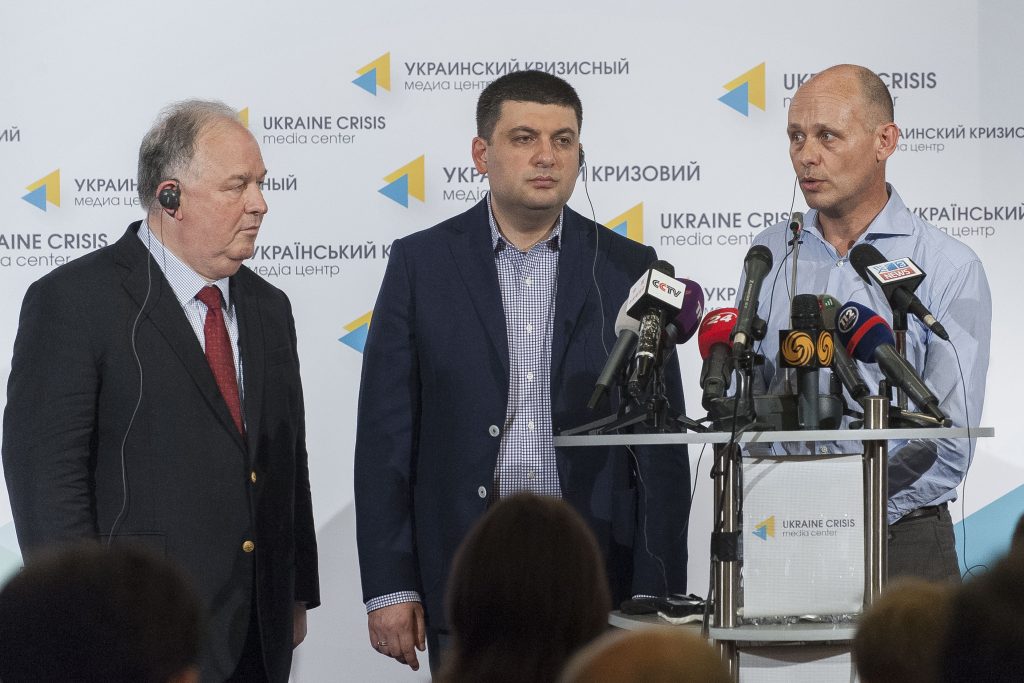 Kyiv, July 20, 2014. The transportation of passengers’ bodies from the Boeing-777 crash site and their identification remains our primary task – reported Kees Van Baar, representative of the Kingdom of the Netherlands at today’s press briefing in Ukraine Crisis Media Center. The event also featured the briefings of Ertugrul Apakan, Chief Monitor of the OSCE Special Monitoring Mission to Ukraine and Volodymyr Groysman, Vice Prime Minister of Ukraine, Head of the government taskforce for MH17 crash investigation.

The Dutch representative Kees van Baar emphasized that the transportation and identification of passengers’ bodies from the site of the tragedy should be executed by Ukrainian experts in cooperation with international specialists. Despite the complexity of the situation Kees van Baar noted that “the efforts of Ukrainian government give hope.”

Ertugrul Apakan, Chief Monitor of the OSCE Special Monitoring Mission to Ukraine highly appreciated the efforts of the Ukrainian government in the investigation process. However, he emphasized that the experts cannot perform the full-scale investigation. There were 21 OSCE monitoring experts who have been sent to the crash site immediately after the tragedy, he said. On the first day the terrorists completely denied access to the crash site; on the second day the experts got limited access. It was not until the third day that the specialists were finally allowed to explore the site. Ukrainian specialists play an integral part in the investigation of the tragedy, noted the official.

Voloyymyr Groysman confirmed that the terrorists hinder the work of the experts by not providing full access to the wreckage of the aircraft and by not giving them a chance to collect all physical evidence. The Vice Prime Minister Groysman said that the militants provided limited access to the crash site only to the employees of the State Service for Emergency Situations of Ukraine. Representatives of other investigative bodies could not fully inspect the scene of the tragedy.

According to Vice Prime Minister Groysman, 192 dead bodies, as well as fragments of eight more bodies were loaded into the special refrigerated railway cars by the employees of the State Emergency Services under the supervision of the terrorists. Currently, the train cars are in the city of Torez and they remain properly sealed. However, the terrorists do not allow the train to leave, so finding out how the bodies were treated will be possible only when the train arrives to a safe location. In the last few hours another 27 bodies and fragments of 20 more bodies have been found. The refrigerators have been dispatched to pick them up, reported the Ukrainian official.

Commenting on the question whether the identification of the bodies will be held in Kharkiv, Volodymyr Groysman noted that the Ukrainian government will report additionally on the final destination of a special train. The status of the airliner’s “black boxes” also remains unclear as they haven’t been released yet to the Ukrainian authorities, as the international laws demand.

The Ukrainian Vice-Prime Minister Groysman informed that 200 experts have already arrived from around the world to assist in the investigation. The official noted that Ukraine is ready to cooperate with all international experts, but it “cannot offer them any security guarantees on the territory controlled by the terrorists; and the Russian Federation has not yet made a decision on this matter. The decision should be made by each country individually.”

Previously, Volodymyr Groysman reported that the relatives of the victims should contact the Embassy of Ukraine in their countries. The Embassies will then send applications to the Ministry of Foreign Affairs of Ukraine, which will forward them to the Emergency coordinating center. About 500 hotel rooms have already been booked for the relatives who arrive in Kyiv, noted the official.