On March 28 and 29, the highest number of hostile attacks was recorded in Donbas since November 2017: Russia-backed militants delivered 54 and 57 attacks respectively. At midnight on March 30, another ceasefire negotiated by the Trilateral Contact Group on the occasion of Easter came into effect in Donbas. Unfortunately, it was immediately disrupted: by 11:00 of March 30 Russian proxies delivered six attacks already; between March 30 and April 1, Ukrainian troops recorded 81 hostile attacks. 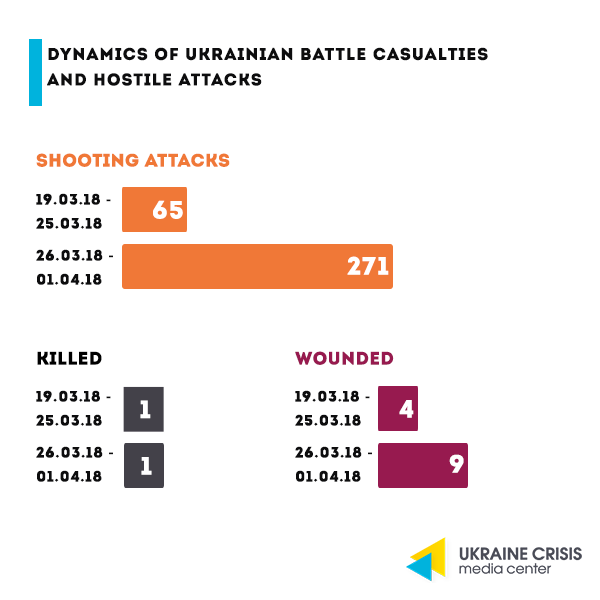 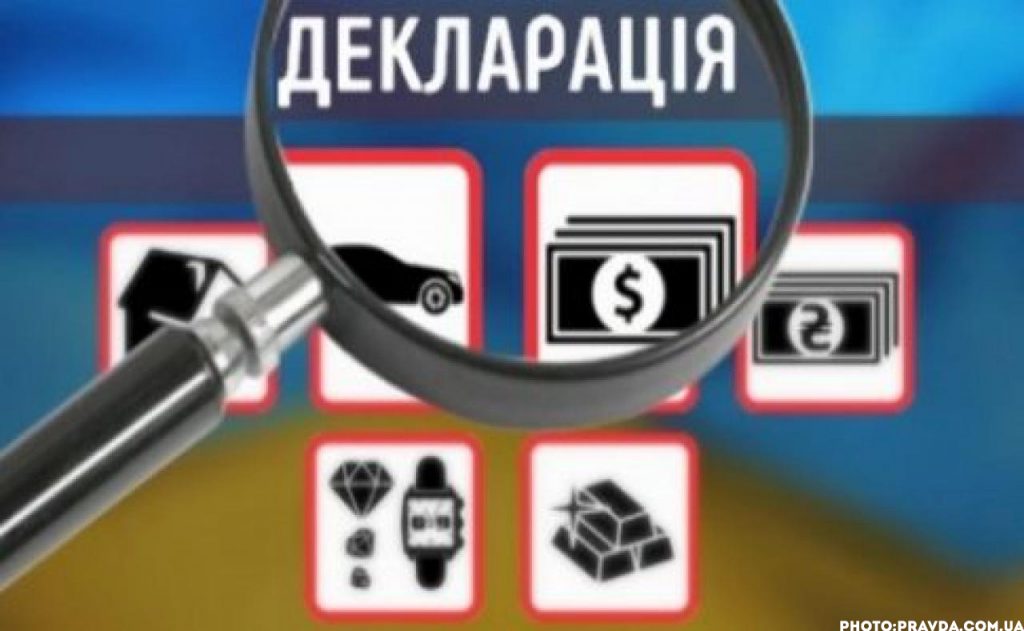 How it all started. Last year, Ukraine’s Parliament passed the law obliging anticorruption activists to declare their assets annually through the e-declaration system. The law is thought to be directed against several NGOs including the Anti-corruption Action Center and Transparency International. Many experts called this law a “revenge” the authorities took on the activists for what they did to disclose their offenses. Throughout the year, both Ukraine’s civil society and western partners were calling for the law to be revoked. Ukrainian authorities were continuously claiming that they do agree to the demands but in fact had no intention to annul the law.

The position of NGOs. On March 29, 2018, the Reanimation Package of Reforms (a civic initiative that unites several dozens of Ukrainian NGOs and experts) released a statement signed by 86 NGOs in which the organizations declare their intention to lodge an appeal to the Constitutional Court as to the mandatory e-declaration of assets for anti-corruption activists. Activists claim that extending the scope of action of the law from civil servants to anticorruption activists is a form of discrimination based on professional activities, it also violates the Convention for the Protection of Human Rights and Fundamental Freedoms (the European Convention on Human Rights), provisions of the Constitution of Ukraine on the right to the freedom of assembly, the right to work, equal opportunities when choosing a job and a sector for professional activities, freedom of thought and expression, privacy as well as on the right to respect for private and family life.

President Poroshenko’s position. In his public statements, the President of Ukraine Petro Poroshenko insists that the Verkhovna Rada (Ukraine’s Parliament) should revoke the mandatory e-declaration of assets for the representatives of anti-corruption NGOs. At the same time, many experts do not trust these statements as his parliamentary faction fails to vote correspondingly.

The reaction of the ambassadors of G7 member states. Ambassadors of the G7 countries called upon the Verkhovna Rada to revoke the provisions binding anti-corruption activists and international members of steering committees of Ukrainian state-owned companies to submit e-declarations. The ambassadors also called upon the Parliament to enforce a temporary provision excusing from liability the persons who failed to submit the declarations in due time.

The EU reacts. On March 28, 2018, the EU Commissioner for European Neighbourhood Policy and Enlargement Negotiations Johannes Hahn made a very tough statement as to the failure of the Ukrainian authorities to live up to their commitments. Brussels several times demanded from Ukraine to revoke the provision in question, but nothing was done. The President Poroshenko introduced a draft law that was severely criticized by the Venice Commission, while the Verkhovna Rada did not find the votes to revoke the scandalous provisions. “The Ukrainian authorities have not lived up to their commitment,” the European Commissioner stated. “The failure to repeal the extension of this obligation from public officials also to civic activists is contrary to Ukraine’s European aspirations,” he added. 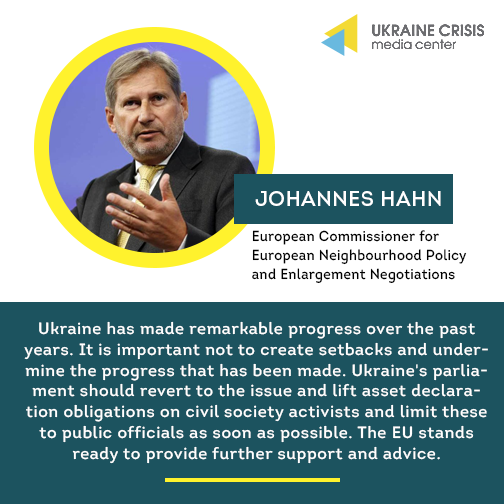 What does this mean? What pragmatic goal made the Parliament and the President go for such an escalation with the EU resulting from the non-revocation of these declarations by April 1 despite their public commitments? “I have a feeling that the Parliament and the President have achieved their actual pragmatic goal exactly today: they have forced the anti-corruption activists to publicly declare their assets at least once (…). Now the assets of the anticorruption actors came into the spotlight and will become subject to a PR game and a card to play in the next elections,” wrote philosopher Oleksiy Panych on Facebook.

What’s next? Voting on a new draft law revoking the provision binding the civil society actors to declare their assets is scheduled for April 3. If the draft law passes, those who have not submitted their declarations will be excused from liability, while the already submitted declarations will not be subject to checks.

Ukraine in the 2018 “Westernization Index”

StrategEast think-tank has been traditionally researching the ties between political and business elites of the former Soviet republics and their partners in the US and Western Europe. This year the organization has prepared a research on the “Westernization Index” of the countries from the former Soviet Bloc.

The research evaluates the level of integration each of the 14 former Soviet republics reached with the Western world in the five key areas – politics, economics, law, language and culture, as well as lifestyle. As to Ukraine’s ranking, the report was prepared by StrategEast with the support from experts of the local New Europe Center.

By “Westernization” the research authors imply the level of the society’s compliance with the western living standards. Important indicators are the fight against corruption, transparent business rules, modernized infrastructure, independent media and solid civil society, transparency in the energy sector etc.

Based on the research results, Ukraine ranks sixth after the Baltic states (Estonia, Lithuania, and Latvia), Georgia and Moldova. The “westernization” leader is Estonia (93 points out of 100 possible), Lithuania (85 points) and Latvia (82 points) follow. Georgia received 62 points, while Ukraine has 54. Ukraine managed to pass Armenia, Belarus as well as all the former republics in Asia (Azerbaijan, Kyrgyzstan, Turkmenistan, Tajikistan). The complete research in English is available here.

Culture: Docudays UA – the boom of Ukrainian documentaries and the industry development 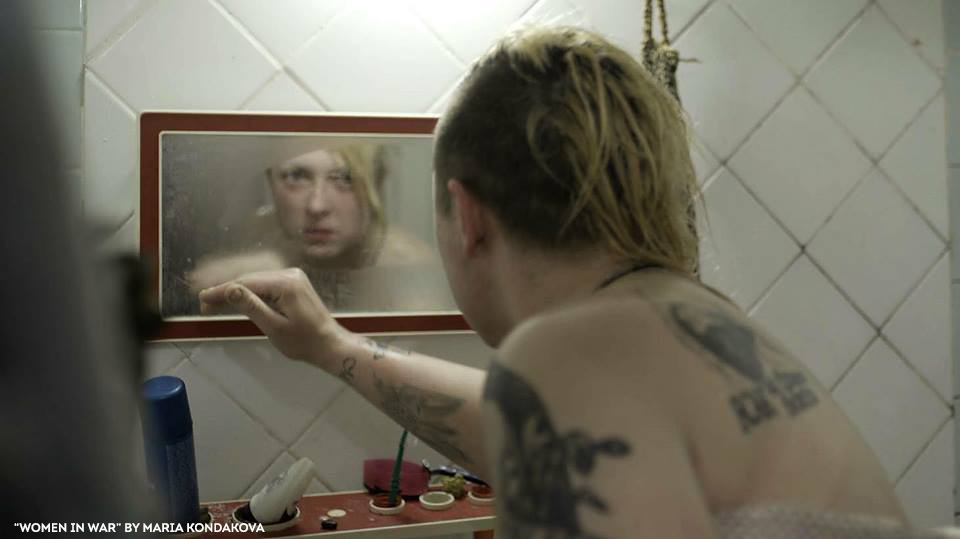 The 15th Docudays UA International Human Rights Documentary Film Festival took place in Kyiv. The festival is forming a powerful industrial platform and is becoming a true driving force behind the development of Ukrainian documentary films. Thus, this year one of the events in the festival’s program for professionals was the “B2B Doc: Producers Meet Producers” project organized in cooperation with the Baltic to Black Sea Documentary Network to foster co-production opportunities. Fourteen projects in progress from Ukraine, Belarus, Armenia, Moldova, and Georgia were presented to the guest producers from the Baltic states, Scandinavia, and Western Europe.
For the first time in the festival’s history, the Ukrainian competition program was formed by feature-length documentaries. Many of them were produced with the support from the Ukrainian State Film Agency.
The topics of the showcased Ukrainian films range from reflections on the war and social changes of the post-Maidan Ukraine to a wider context in which Ukraine is part of the global scene. One of the winning films – No Obvious Signs by Alina Horlova narrates the return of a female veteran of the war in eastern Ukraine to peaceful life (teaser). Stories of three female combatants are in focus of the “Women in War“ film by Maria Kondakova (FB page). The war is also a key narration line in “The First Company” as well as the background in the “Mustard in the Gardens” documentaries, both awarded at the festival. In the “Almost 10.000 Voters” film by Uliana Osovska the protagonist is an activist and volunteer participating in the election campaign to the post of the city mayor in a central Ukrainian town. He thus has to challenge the representatives of the old corrupt elites. “Delta”, Ukrainian-German documentary by Oleksandr Techynskyi, screened in the non-competition program and earlier awarded at the DOK Leipzig festival, portrays daily life in Vylkove – a Ukrainian town on water in the Danube’s Delta (teaser). Another award-winner – “Enticing, Sugary, Boundless or Songs and Dances About Death” by Tania Khodakivska and Oleksandr Stekolenko mixes the stories of prominent artists with those of common people traveling from the US and Italy to Ukraine and Georgia. In the film to have scooped the main prize at the festival – “Whereufrom” by Dmytro Lavrynenko, it was the editing that became subject to the particular distinction. One camera belongs to the protagonist – a street cleaner in Kharkiv who travels to the US from time to time; another one is that of the film director.