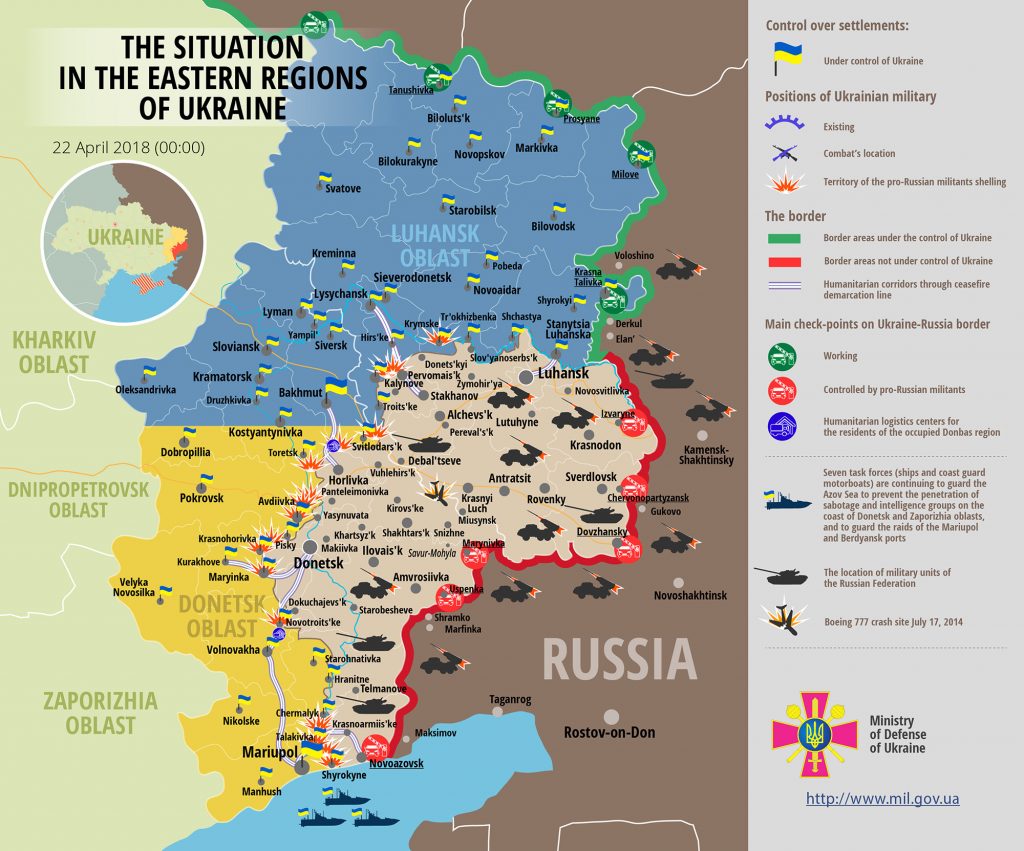 Thirty-six of militants’ attacks took place in Donetsk sector. At 06:30, they opened fire against Ukrainian positions near Pischevyk and Pavlopil and continued firing for 40 minutes. “During this attack, Russian proxies fired some 50 rounds from tank cannon and more than 65 rounds from 120-mm mortars. They also used mounted weapons of infantry fighting vehicles,” elaborated Col. Prauta. The entry-exit checkpoint “Hnutove” located in that area stopped its work for 90 minutes because of the shelling, all civilians were evacuated to secure areas.

Unfortunately, one Ukrainian serviceman was killed and one more wounded in an explosion of an unknown device yesterday. Three more servicemen were wounded by the hostile fire.

As of 09:00 of April 22, Russia-backed militants delivered an attack near Talakivka using grenade launchers, heavy machine guns and small arms, and having fired multiple 82-mm mortar rounds. The attack took place between 05:30-06:00.

Concerning the situation with Donetsk Water Filtration Station, Colonel Prauta reminded that Ukrainian side is ready to provide all security guarantees to the station’s staff workers in order to do necessary reparations. “The ATO Staff is interested to resolve the problem regarding Donetsk Water Filtration Station as soon as possible, so that the Station resumed its normal functioning and water supply for thousands of hundreds of Ukrainians both on government-controlled and temporarily occupied territories,” noted Ministry of Defense spokesman.

Report on the military developments as of April 21 is available here. Interactive data on the shelling: chronology shelling chart and the interactive map.