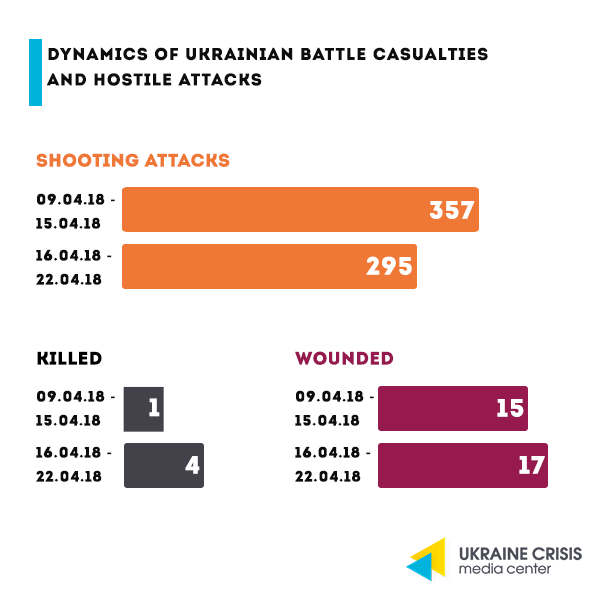 Combat actions of medium and high intensity continue in eastern Ukraine. Russia-backed militants started using tanks more as well as employed BM-21 Grad MLRS for the first time in quite a while. Moreover, on April 17 militants mortared the residential areas of Zaitseve and later opened small arms fire at the representatives of the Joint Center for Control and Coordination who arrived to check the impact site.

OSCE. Last week, SMM OSCE recorded 4,827 ceasefire violations in eastern Ukraine, which is a ten-percent increase compared to the week before. SMM monitors observed 144 weapons in violation of withdrawal lines, 49 of them in government-controlled territory and 95 in areas not controlled by the government.

Water supply restored. On April 22, the Donetsk Water Filtration Station resumed its operation. The station supplies water to over 300 thousand residents of the adjacent areas (both government-controlled and uncontrolled). The Donetsk Water Filtration Station ceased its operation after a service bus transporting the station’s personnel came under fire on April 17.

Civilians. OSCE monitors confirmed that 11 civilians were injured and dozens of civilian houses or apartment buildings were damaged in eastern Ukraine last week. “In just one small area of Staromykhailivka – within a radius of just 800 meters – our monitoring officers, for example, last week observed 13 homes damaged,” elaborated Alexander Hug.

Resulting from Tuesday’s attack on Donetsk Water Filtration Station, five workers were wounded, and one more injured.  “On Wednesday this week, the Donetsk filtration station was closed and sealed, and its operations ceased,” Alexander Hug noted.

Migration: are Ukrainians leaving the country? 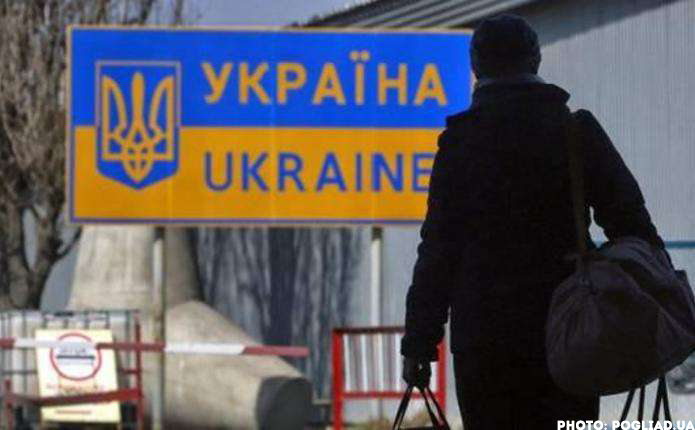 Combat actions in Donbas, slow economic growth and Ukraine’s visa-free regime with the EU – are just a few from the list of the factors that make both Ukrainian politicians and international analysts say that one of Ukraine’s biggest problems is its citizens massively leaving the country. Ukrainian NGO VoxCheck analyzed the actual trends of the phenomenon and published a special material. UCMC presents its key findings.

Key figures: eighth place in the world by the number of migrants. According to the UN, there were 258 million migrants in the world in 2017, they make up about three percent of the entire world population. Ukraine was ranked eighth biggest country of migrants’ origin in the world – almost six million Ukrainians have emigrated since Ukraine became independent (in 1991). According to the International Organization for Migration, eight million persons have left Ukraine since the beginning of the XX century, five to eight million Ukrainians have left the country for good.

Labor migration. According to a research by Ukraine’s State Service of Statistics, between 2014 and 2017 about 1.3 million Ukrainians (the equivalent of seven percent of the working age population) worked abroad. These are the figures that relate to legal migration. Meanwhile, illegal migration is hard to measure. Some Polish officials say there are two million Ukrainians employed in Poland alone. However, these numbers are most likely overestimated. In 2017, Polish employers received 1,8 million permits to employ foreign nationals for up to six months. Ninety percent of the permits (1,6 million) were issued to hire Ukrainian workers. Other sources quote such figures: 150 thousand residence permits were issued for Ukrainians in Poland in 2018, 40 thousand Ukrainians were working abroad on the long-term basis.

Do young Ukrainians want to leave? According to an opinion poll by Rating Group, 53 percent of the interviewed persons aged 18-35 said they want to live abroad – 31 percent would “definitely” like to leave, while 22 percent would “probably” like to. At the same time, 37 percent of young people would definitely like to return to Ukraine later, 23 percent would probably do so.

Ukraine in the Quality of Nationality Index 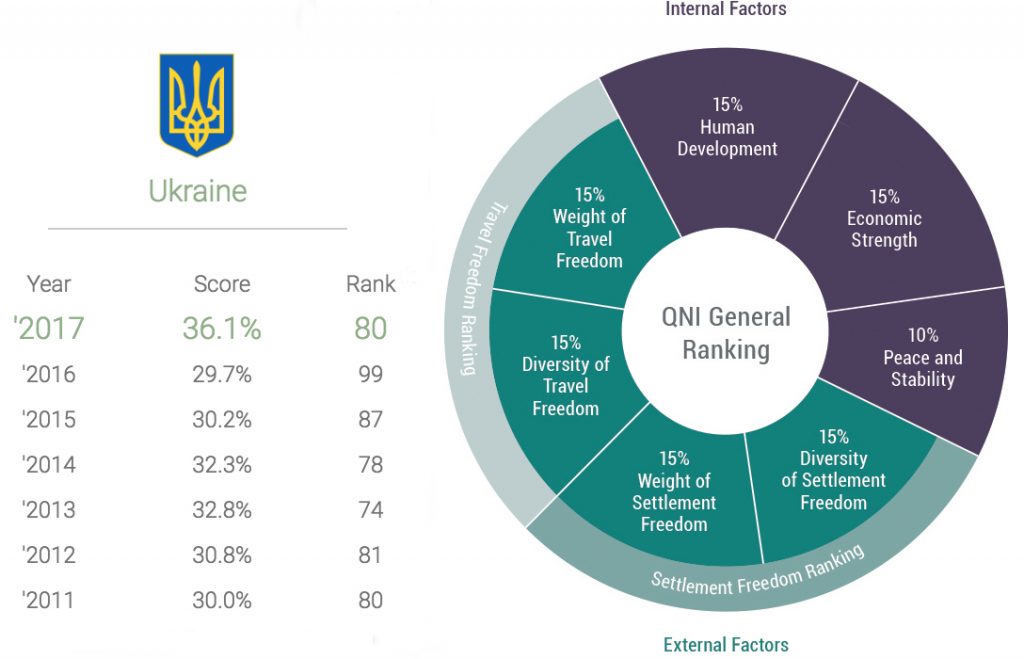 Ukraine moved up from the 99th to the 80th position in the Quality of Nationality Index (The Henley&Partners – Kochenov Quality of Nationality Index, QNI) and became one of the top three countries that had their citizenship value grow most rapidly. The index takes into consideration both internal factors (economy scale, human dynamics, peace, and stability) and external ones (visa-free access to short-term trips as well as the opportunity to live and work visa-free in other countries), that affect the quality indicators of a particular citizenship.

The main reason behind the growth of the Ukrainian citizenship’s indicators is the introduction of the visa-free regime with the countries of the Schengen area. The number of states Ukrainians can visit without a visa increased from 81 to 115 in one year.

The authors of the Index claim that Ukraine could have taken a higher position in the ranking if were not for the geopolitical issues. The country’s position in the ranking five years ago was better than now – Ukraine was ranked 74th in 2013 and 78t in 2014. The ongoing military conflict that started in Ukraine back in 2014 is considerably worsening the state’s score in the “peace and stability” category. Out of the 209 countries evaluated in 2017, France was ranked first for the first time in the past five years. Germany, last year’s leader, was ranked second.

The richest Ukrainians: who are they?

Owner of the SCM group of companies Rinat Akhmetov whose assets constitute $3,1 billion was ranked Ukraine’s richest person, according to the ranking of Ukraine’s 100 richest people compiled by Focus magazine. According to Bloomberg, Akhmetov is the world’s 393rd richest person. The agency claims that Akhmetov’s money would be able to cover Ukraine’s needs for 36 days.

According to the ranking, and similarly to the last year’s ranking, the second, third, and fourth positions respectively were taken by co-owners of the “Pryvat” group Ihor Kolomoyskyi and Gennadiy Bogolyubov ($1,6 and $1,5 billion respectively) and Viktor Pinchuk ($1,4 billion). The owner of Ferrexpo, billionaire Kostiantyn Zhevaho went up and took the fifth position.

Petro Poroshenko left the top 10 and was ranked 11th with his assets estimated at $542 million. According to theInternational Financial Reporting Standards, the shipbuilding and armament company Kuznia na Rybalskomu, of which Petro Poroshenko is one of the final beneficiaries, increased its net profit in 2017 by 119,1 percent compared to 2016, and thus reached UAH 18,6 million (approx. $709 thousand).