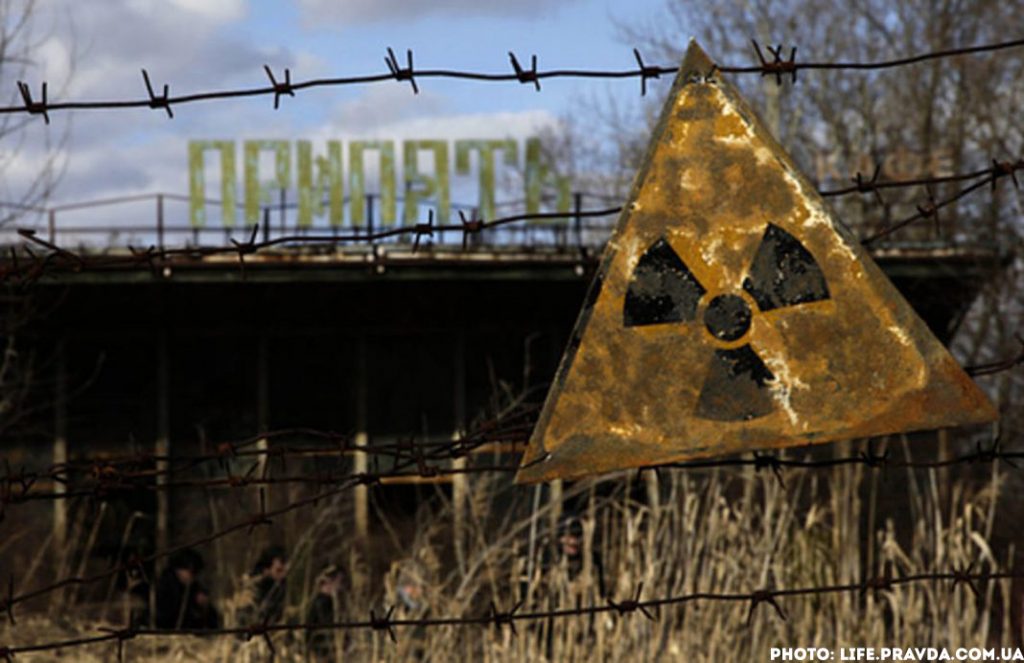 On April 26, Ukraine recalls Chornobyl disaster that happened 32 years ago. It was the country’s largest ecological tragedy of global scale. UCMC has prepared 10 facts that may surprise you.

The key figures about Chornobyl

According to various data, 600 to 800 thousand people from all over the USSR participated in the liquidation of the consequences of the Chornobyl Nuclear Power Plant accident. In the first days of the accident, 31 people died, 4,000 to 10,000 people died from the consequences of the explosion. Over 70,000 became disabled. The radioactive radiation caused by the Chornobyl explosion affected 1.9 million people in Ukraine. A total of about 8.4 million people in Belarus, Russia, Ukraine, and other European countries were affected. 47,500 people were evacuated from Prypyat, the city that accommodated the power plant. Currently, about 140 people – so-called self-settlers – live in the exclusion zone. 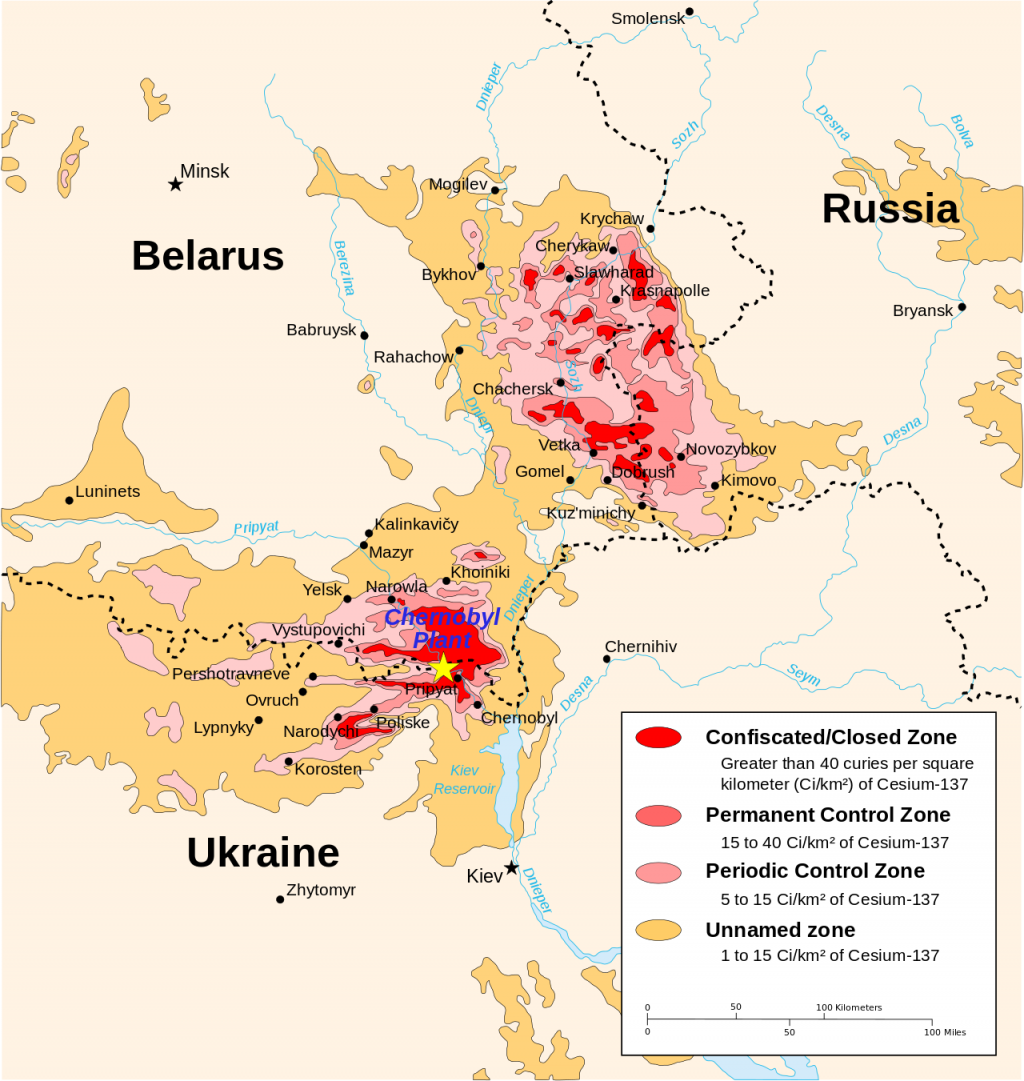 The Chornobyl disaster was so severe that it was assigned the highest, 7th level of danger on the International Nuclear Event Scale (INES) – the events at Chornobyl became a local catastrophe with global consequences. Currently, it is forbidden to live in a 30-kilometer zone around the reactor, but options for a reduction are already being discussed.

The 7th level of danger was also assigned to the accident at Japan’s “Fukushima-1” nuclear power plant, which occurred in 2011 as a result of an earthquake. 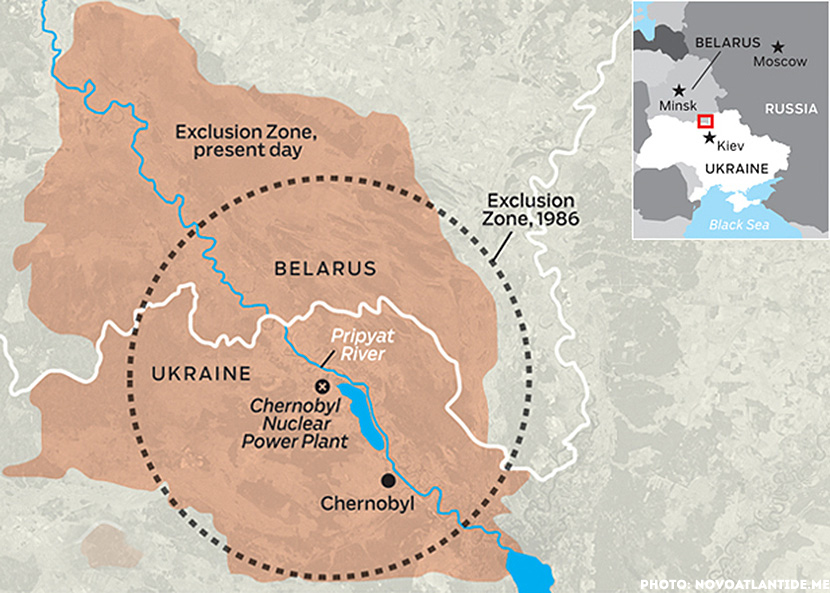 The worst-case scenario avoided: how the second explosion in Chornobyl was prevented

On May 1, 1986, the active zone of the exploded reactor was still melting. The core contained 185 tons of nuclear fuel, and the nuclear reaction continued at an appalling rate.

Under the nuclear material was a reservoir containing five million gallons of water. The only thing separating the core of the melting reactor from the water was a thick concrete slab, but the active zone was slowly burning through the slab. If the reactor core had touched water, it would have triggered a massive, radiation-contaminated steam explosion. It could have resulted in a radioactive contamination of most of Europe making the first Chornobyl explosion to look like a minor accident. Such an explosion could have destroyed Kyiv, polluted the water supply system used by 30 million people, and made northern Ukraine uninhabitable for more than a century. It was decided that three people in aqualungs would go through the flooded chambers of the fourth reactor. When they reached the water, they would find a pair of check valves and open them, so that the water would completely empty out before it could come into contact with the reactor’s active zone. 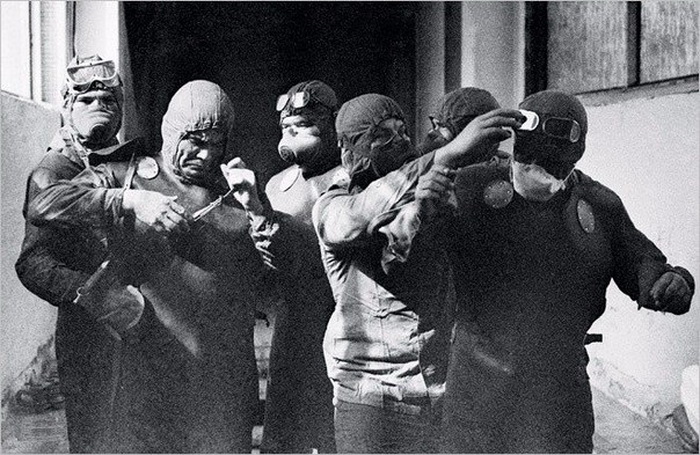 They volunteered in spite of being aware that diving into a radioactive pool under a melting reactor was likely to be the last thing they would do in their life. After a long search, the divers opened the latches. The pool began to empty out quickly. Over the next day, all five million gallons of radioactive water flowed out from under the fourth reactor. By the time the melted core above the pool had made its way to the reservoir, there was no more water in it. The second explosion was prevented. During the following days, the three rescuers had inevitable and unmistakable symptoms of radiation sickness. After a few weeks, all three died.

The men were buried in leaden coffins with sealed lids. Even devoid of life, their bodies were saturated with deadly radiation. 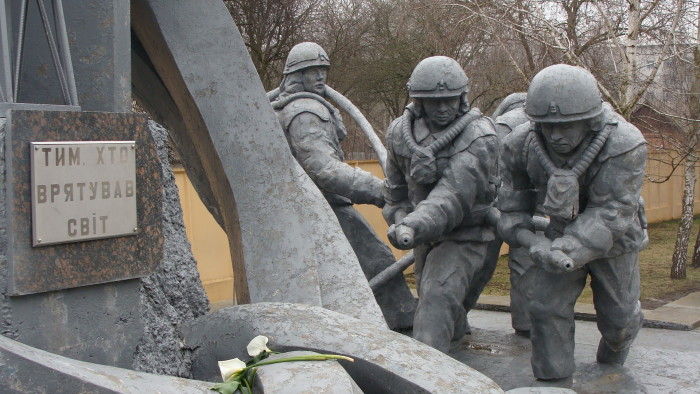 Dedication on the monument: To the ones who saved the world

The construction of a modern arch-like “shelter” over the destroyed reactor of the Chornobyl Nuclear Power Plant started in 2012. It is 257 meters wide, 150 meters long and 108 meters high. The weight of the constructions is about 29,000 tons. The construction was completed on November 29, 2016. A huge domelike building, known among specialists as the New Safe Confinement, covered the old Chornobyl Sarcophagus in order to secure the dangerous Chornobyl fourth reactor, radioactive equipment, nuclear waste, and dust residues for the next 100 years. Now the effect of the New Shelter is obvious: according to the workers of the station, today’s level of radioactivity close to the reactor allows a person to stay up to 10 hours there without exceeding the allowable daily dose of radiation. 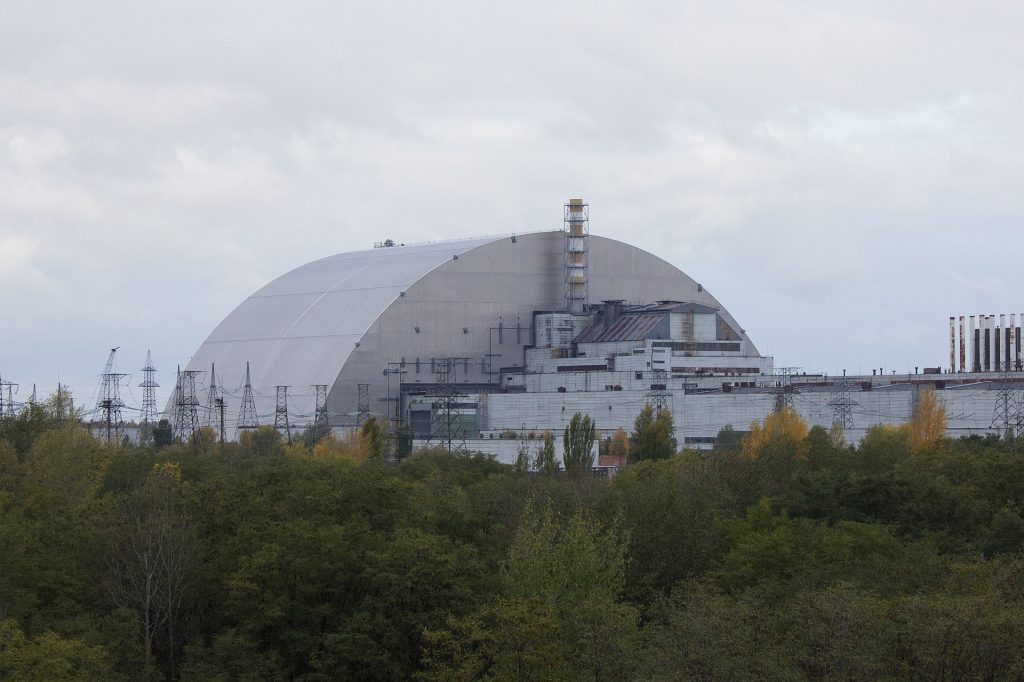 Ideal roads in the exclusion zone

The roads in the exclusion zone are ideally smooth, without a single pothole – and this contrasts very much with the roads in Ukraine as a whole. Smooth asphalt coating prevents from scattering radioactive waste that is transported in trucks for research or storage. Maximum speed for a waste truck is 40 km/h.

After their compulsory resettlement, some of the former inhabitants of the areas adjoining the reactor began to return. Now up to 150 people are living in the Exclusion Zone. Over the years, they have reconciled themselves to radiation. Most people have come to believe that, even if there is a danger, it will not affect them personally. Françoise Zonabend (2007) describes a similar strategy used by people who live near the nuclear waste processing plant in France and trying to come to terms with the risks of radioactive exposure and contamination. Public opinion polls show that the closer an individual lives to the nuclear facility, the less is his fear of a disaster like the Chornobyl one. Therefore, the radioactive danger is of less concern to Chornobyl victims than is the fact of their relocation from their native land. Usually, they are ready to admit that there is no radiation in the Zone at all. Surprisingly, oncological diseases are less common among the “returnees” than among the “liquidators” of the 1986-1987 disaster. This may indicate that small radioactive exposure over a long period of time is less dangerous than acute exposure over a short period of time. 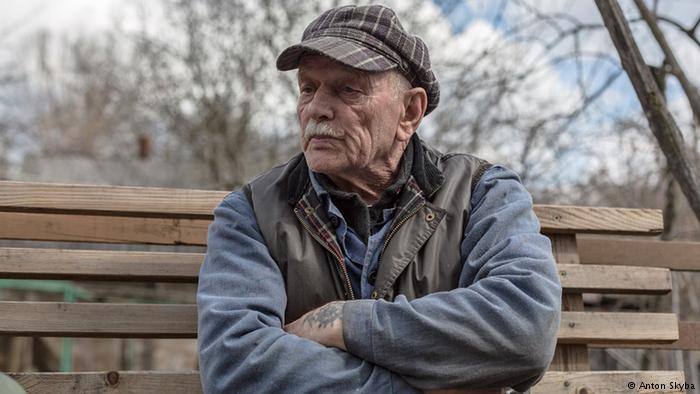 Reducing the radius of the Zone and creating a nature reserve

The issue of the possibility of reducing the Exclusion Zone is being considered from time to time. According to the program approved by the Verkhovna Rada, ChNPP should be completely eliminated by 2065: fuel will be removed and moved to the long-term storage facilities, isolation of the reactors will take place, and when the level of radioactivity is decreased, they will be dismantled and the area will be cleared. Although there is an officially established boundary and it separates the 30-kilometer area around the reactor, the borders of the Zone are rather blurry. A blurring of these borders is explained by the fact that they were conditionally designated immediately after the accident. In fact, there were more radioactive contaminated areas outside the Zone than in the Zone itself. Besides, some proposals on the rational use of more or less safe areas have been made recently. For example, the creation of the Polissia Biosphere Reserve. About 400 species of animals, birds, and fish live in the Exclusion Zone, 60 of them are listed in the Red Data Book of Ukraine. The same is true of the flora. Of a list of 1,200 species found in the Zone, 20 are rare. Rare black storks and raccoon dogs began to appear here. This is untypical of these territories.

A solar power plant in Chornobyl

It is planned to launch the first solar power plant in the Chornobyl Exclusion Zone. It is assumed to cover the electricity needs of the average Ukrainian village, about two thousand households. Its power is planned to reach one megawatt. The station will be located only one hundred meters from the new sarcophagus of the fourth power unit of the Chornobyl Nuclear Power Plant. Its size will be about 1.6 hectares, that is, two football fields.

In March 2017, the State Agency of Ukraine for Management of the Exclusion Zone held a competition among companies that had decided to build solar energy facilities in the Chornobyl zone. More than 50 companies from Denmark, USA, China, Germany, France, Ukraine, and Belarus submitted applications for receiving the land plots for construction and operation of solar generation facilities in the Exclusion Zone. Only the private company Solar Chornobyl LLC, which operates in a consortium with the Ukrainian company Rodina and the German Enerparc AG, reached the project implementation stage and began construction in October 2017. The company invested about one million euros in the project. The station was built in a month and is planned to be put into operation at the end of 2017. However, for almost half a year, it cannot be connected to the grid due to bureaucratic delays.

The Zone draws the attention of many foreign tourists, researchers, and artists.

In 2014, the cult band Pink Floyd presented a video for the song “Marooned” shot in a ghost town of Prypyat. It got more than 20 million views.

Besides, the story of Chornobyl was included in the short film of the Scottish pop-rock singer Paolo Nutini. The video was filmed for the song “Iron Sky”. It got over two million views.

Can there be a “second Chornobyl” at the Yunkom mine in Donbas?

Since April 2018, water pumping from the mine “Young Communard”, more commonly known as “Yunkom”, has been stopped. “DPR” militants have chosen a cheaper and simpler option of the mine conservation. They refer to the conclusions of Russian scientists. Instead, according to the Ukrainian experts, the flooding of the mine in parallel with the same processes in other mines can provoke an ecological catastrophe – a “second Chornobyl.” A chamber with radioactive substances is stored in this mine, at a depth of 903 meters, slightly higher than the last layer of its mine working. It is just this that will make this mining object potentially dangerous for many years. Read more about the ecological danger in the special project of Hromadske