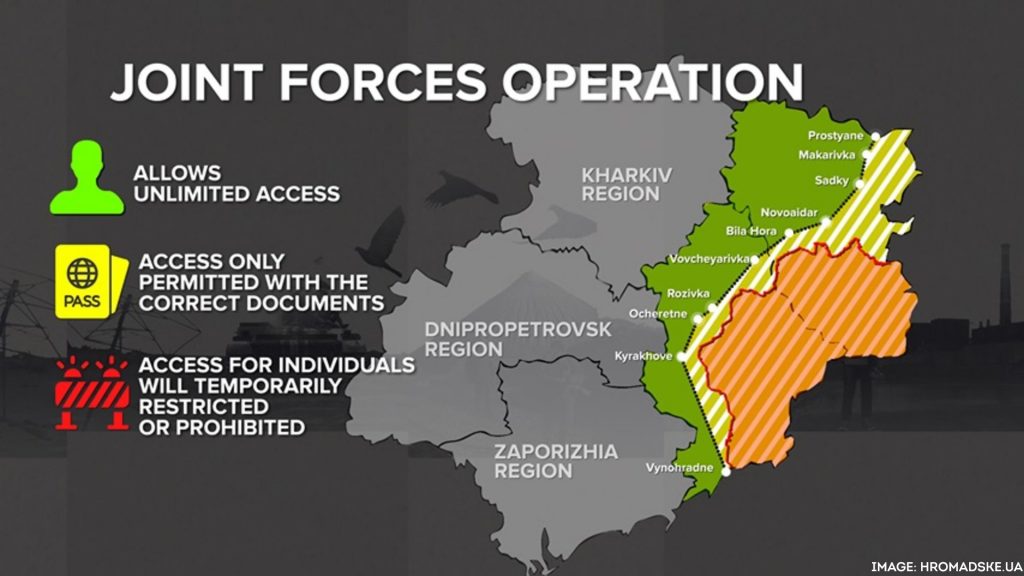 After four years of the hostilities in Donbas, the name of the undeclared war in the east of the country has changed. The anti-terrorist operation (ATO) officially concluded at 14:00 on April 30, 2018, when the Joint Forces Operation (JFO) foreseen by the law on de-occupation of Donbas commenced. On the same day, the President of Ukraine signed the order stipulating the start of the operation. UCMC takes a look at what the new operation is about, what changes it brings to civilians, and what is going to change for international journalists.

JFO instead of ATO: why has the name changed? For years, the combat actions in eastern Ukraine were called “anti-terrorist operation” (abbreviated ATO). The so-called “DPR” and “LPR” were recognized terrorist organizations by the Ukrainian Parliament, making the name of ATO point at them as at the main enemy. The new name seeks to record another reality – Russia as the aggressor. Lieutenant-General Serhiy Nayev, the commander of the Joint Forces Operation, explained that as these are Russian regular military forces that are in command of the two joint corps in the occupied Donbas, it is not a fight against militants or terrorists. Ukraine is facing Russian aggression, so it’s not Ukraine’s Security Service but the Ukrainian Armed Forces have to counteract the aggression. Respectively the name of the operation itself should not contain the word “anti-terrorist”.

Ukraine’s Security Service vs the Armed Forces: who is in charge? Apart from the name change, there are some organizational changes as well. Main changes redefined the areas of responsibility of the law enforcement agencies. Earlier, the Anti-terrorist Operation was overseen by the Anti-terrorist Center of Ukraine’s Security Service, while the Joint Forces Operation is strategically led by the General Staff of the Ukrainian Armed Forces.

What are the Joint Forces? From now on, heads of the civil-military administrations are also subordinated to the Joint Forces commander Lieutenant-General Nayev. He is also to approve the appointment and dismissal of the high-level officials at the civil-military administrations. Starting May 1, the Joint Forces Headquarters also reports on the activities of all law enforcement agencies in Donbas including the Border Guard Service, police, the Security Service, the Fiscal Service, and the National Guard. Nayev said that one of his tasks will be to stop smuggling at control points across the contact line.

“Liberation of Donbas” or “restraining Russia”: is there an escalation brewing? In his first press briefing, the Joint Forces Commander Nayev spoke about several tasks of the operation that at first glance seem to contradict each other. One of them is “the liberation of the temporarily occupied territories”, but at the same time “the operation does not foresee the intensification of combat actions at the contact line and is set to establish peace”. It remains unclear in what way the military is going to regain control over the occupied part of Donbas without combat actions. The Lieutenant-General is emphasizing “restraint” of the enemy as the key task of the new operation.

Who is Serhiy Nayev, the new chief of the operation? Serhiy Nayev is a Ukrainian military, Lieutenant-General. He graduated from the Moscow Higher Military Command College in 1991. In 1991 he served as a commander of a motor-rifle platoon, a part of the East German military contingent that was being withdrawn from united Germany at the time. Nayev has been part of the Ukrainian Armed Forces since May 1993. In 2006-2007, he took up a course at the National Defense Academy of Ukraine, at the faculty training operational and strategic level staff. He was decorated as the best graduating officer with the Queen’s Sword, he received the award from the Ambassador of the United Kingdom to Ukraine. In 2014, Nayev was the commander of the “B” sector, at the time of the fierce fight for the Donetsk airport in the area. In 2015-2017, he headed the “East” (Skhid) operational command. Lieutenant-General Nayev was Chief of Staff – the first deputy commander of the Ground Forces of the Ukrainian Armed Forces from late 2017 to early 2018. Today, Nayev is directly subordinated to the Head of the General Staff – the Chief Commander of the Ukrainian Armed Forces. On top of this clear subordination is the Commander-in-Chief – the President of Ukraine. 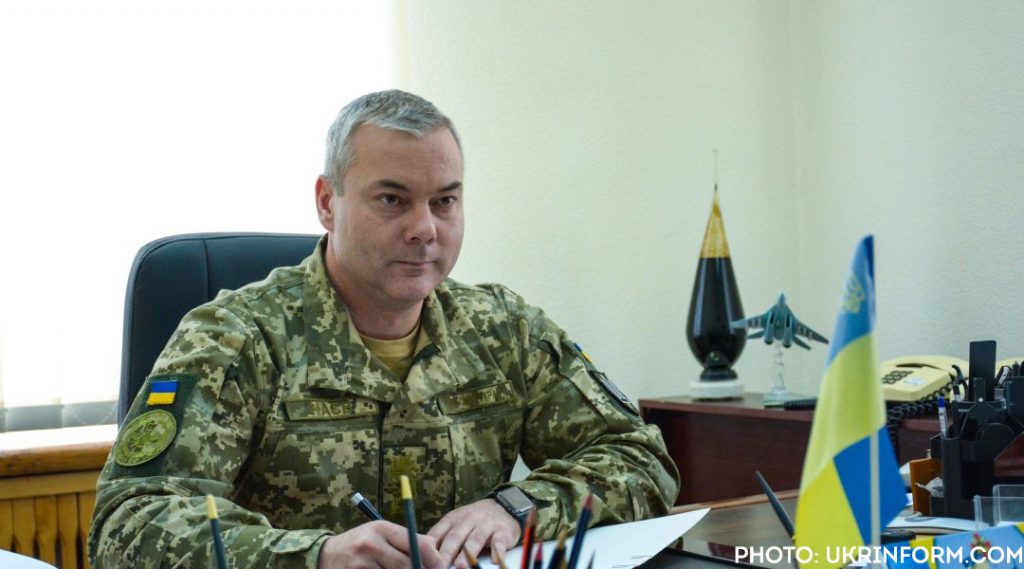 Changes for civilians. The Law on de-occupation of Donbas (“On peculiarities of the state policy to ensure Ukraine’s state sovereignty in the temporarily occupied territories of Donetsk and Luhansk regions”) passed by the Parliament in January 2018 foresees serious restrictions on the movement of civilians. According to the law, the operation covers the entire area of combat actions as well as the so-called “safety zone” stretching around the combat zone. Both areas are defined by the Joint Forces commander. On April 30, the margins of the safety zone were set, thus the area comprises the liberated territories of Donetsk and Luhansk regions ending in the populated areas of Vynohradne, Kurakhove, Ocheretiane, Rozivka, Vovcheyarivka, Bila Hora, Novoaidar, Sadky, Makarivka, and Prostiane. The combat zone starts from the above localities and stretches up to the contact line. Exclusively the military is in charge in this area.

The command of Joint Forces can designate any area in the safety zone any of the following three access levels.

Yellow: access upon the presentation of the ID and checks on luggage and transport.

Civilians can access the area of the Joint Forces Operation if they:

Live in the area of the operation;

Are visiting their relatives and have the documents confirming family ties;

Are visiting the burial sites of their relatives or own the property in the area.

Upon the presentation of respective permission documents, diplomats or representatives of humanitarian missions are let pass. People not registered in the localities close to the contact line will have to get a permission to stay there.

Movement simplified or hampered? According to the Deputy Head of Ukraine’s National Police Kostiantyn Bushuyev, the number of checkpoints in the liberated territory, on the second and third lines namely, is going to decrease, so that civilians will have to make fewer stops to undergo checks when traveling in the area. Civilians in Donetsk and Luhansk regions traveling across the safety zone in the recent days spotted no changes at checkpoints.

Scanned copies of the documents should be then sent to: [email protected]

To get the press card of the Joint Forces Operation, a media representative should send by e-mail their photo, name, a scanned copy of the document confirming their employment with the media in question. Valid ATO press cards will be accepted until August 1, 2018.