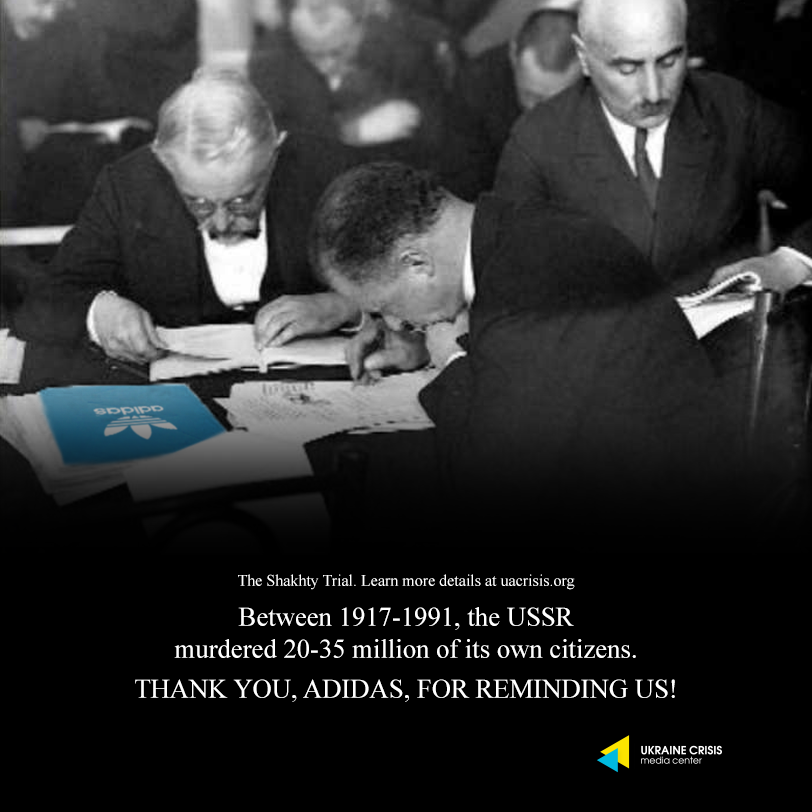 Adidas continues to align its marketing strategy with the Soviet legacy of persecution and totalitarianism, profiting from the sale of USSR-branded products. Therefore, UCMC publishes its ninth protest visual. We encourage everyone to join this campaign and to use their network of contacts to deliver this message to the world.

The Shakhty Trial of 1928 was one of the important Soviet show trials marked the beginning of a long series of accusations against class enemies within the Soviet Union. During the trial, 53 persons were charged with conspiracy to sabotage the coal industry, one of the fundamentals of the Soviet economy. Five of the fifty-three accused engineers were sentenced to death and another forty-four sent to prison. This allowed Stalin to decapitate the old coal industry while covering up the inherent flaws of the planned economy: the forceful execution of unrealistic production plans and political appointment of directors lacking professional and management skills. The Shakhty Trial foreboded the Great Purge of the 1930s.

This is just one of the relatively comprehensible examples of what the USSR really was. During 70 years of Soviet rule, the populations of many nations were decimated, displaced, killed by artificial famine, tortured, persecuted, their lives, cultures, and livelihoods destroyed. The victims of the Soviet communist regime are estimated at 20 to 35M – Ukrainians, Crimean Tatars, Lithuanians, Latvians, Estonians, Georgians, Armenians, Moldovans, Kazakhs, and many other nations suffered at the hands of the USSR.

We demand that Adidas recalls these products immediately from its online and offline stores and distribution centers, and issues a swift and profound apology to all those affected
by its morally repugnant sales tactic.