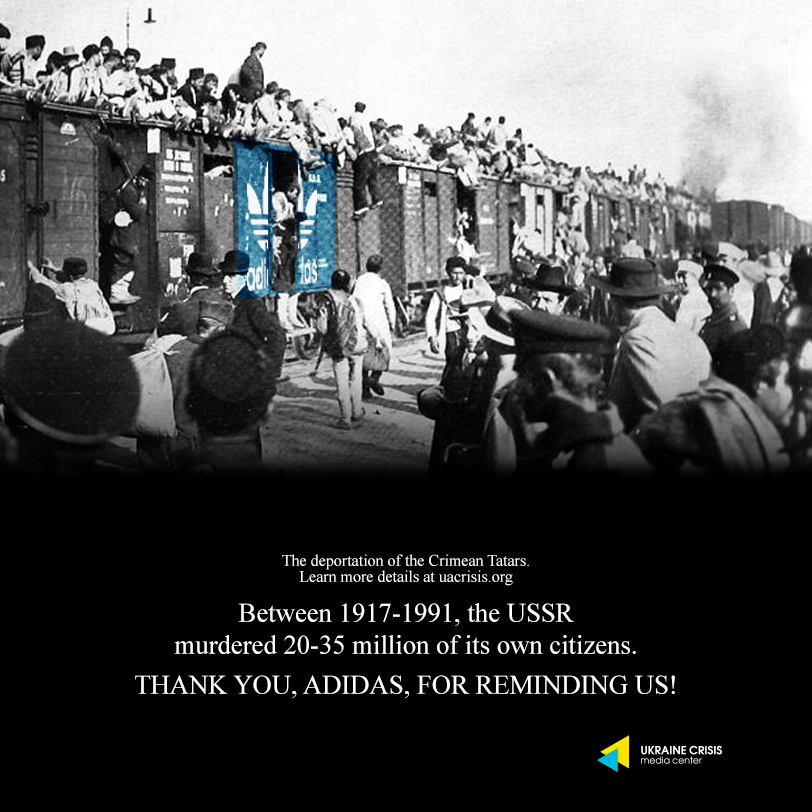 Having in mind the fact that Adidas still refuses to withdraw its ‘USSR’ clothing line and publicly apologize for the incident, UCMC publishes its eighth visual reminder to the company.
We encourage everyone to join this campaign and to use their network of contacts to deliver this message to the world.
May 18-20, 1944, the Soviet secret police used cattle cars to forcibly evict at least 190,000 Crimean Tatars from their Crimean homeland to Soviet Uzbekistan, some several thousand kilometers away. Approximately 8,000 Crimean Tatars died during the deportation, while between 30,000-45,000 perished as a result of harsh conditions in subsequent years. It wasn’t until the late 1980s that Crimean Tatars were allowed to return to their historical home.
They were just one of ten ethnic groups who suffered as a result of the USSR’s forced population transfer policy.

Throughout 70 years of Soviet rule, the populations of Ukrainians, Crimean Tatars, Lithuanians, Latvians, Estonians, Georgians, Armenians, Moldovans, Kazakhs, and many other ethnicities were decimated, displaced, killed by artificial famine, tortured, persecuted, their lives, cultures, and livelihoods destroyed.
By using Soviet symbols for profit, Adidas is openly supporting the modern-day Russian state and its nostalgia for the USSR, a reckless obsession which led to the illegal annexation of Crimea and occupation of eastern Ukraine beginning in 2014. Since then, over 10,000 people were killed and over 1,7 mln people internally displaced as a result of Russia’s attempt to resurrect the USSR.
Why does Adidas continue to align its marketing strategy with a murderous regime?
We demand that the company recalls these products immediately from its online and offline stores and distribution centers and issues a swift and profound apology to all those affected by its morally repugnant sales tactic.