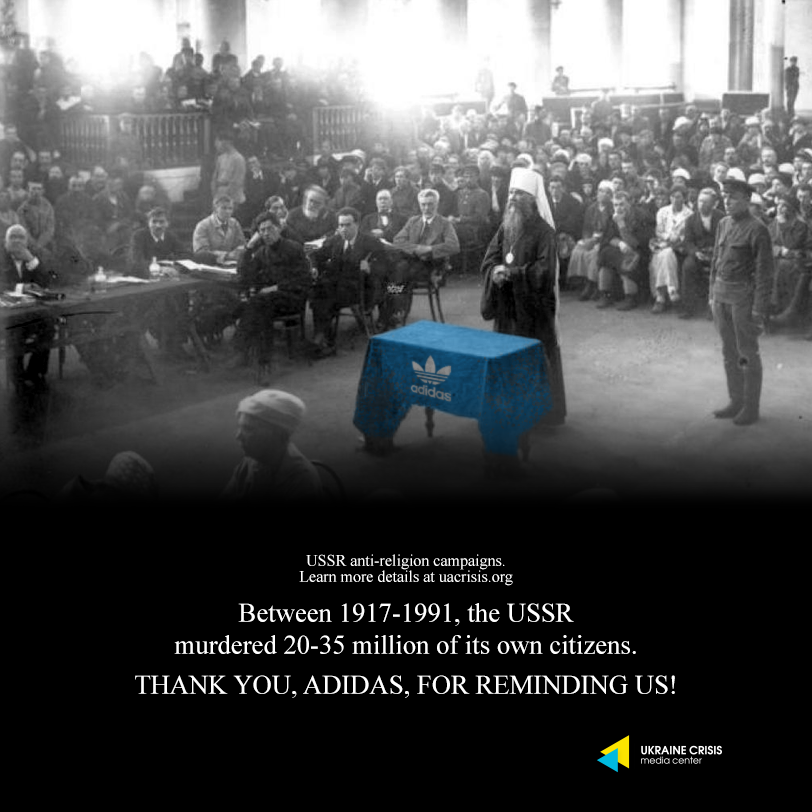 Having in mind the fact that Adidas still refuses to withdraw its ‘USSR’ clothing line and publicly apologize for it, UCMC publishes its sixteenth visual reminder to the company.
We encourage everyone to join this campaign and to use their network of contacts to deliver this message to the world.

The Soviet war against religion spanned almost seven decades. The sheer scale of the persecution was unimaginable: over 8,000 priests were killed by the Soviet regime in 1922 alone as the USSR raided churches to steal its material assets. During the purges of 1937-38, church documents show that 168,300 members of the Orthodox clergy were arrested; over 100,000 were executed.

This is just one example of what the USSR really was. Throughout 70 years of Soviet rule, the populations of Ukrainians, Crimean Tatars, Lithuanians, Latvians, Estonians, Georgians, Armenians, Moldovans, Kazakhs, and many other ethnicities were decimated, displaced, killed by artificial famine, tortured, persecuted, their lives, cultures, and livelihoods destroyed.

We demand that the company recalls these products immediately from its online/offline stores and distribution centers and issues an unequivocal apology to all those affected by this morally reprehensible sales tactic.