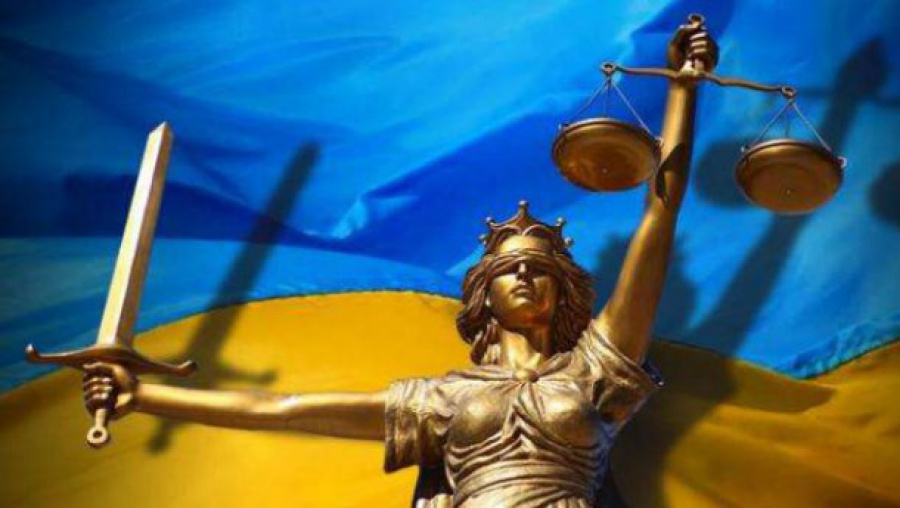 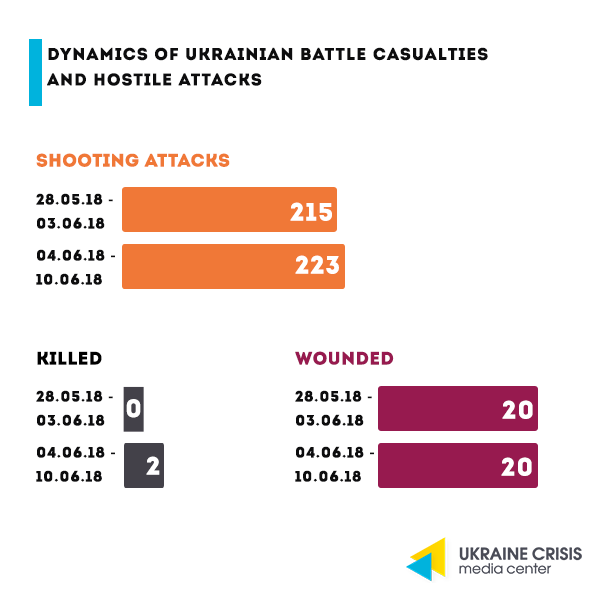 Last week a slight decrease in the intensity of the hostilities in eastern Ukraine was observed, mostly in Donetsk sector. Russia-backed militants kept using the Minsk-proscribed weapons including 82-mm and 120-mm mortars, 122-mm artillery, and tanks.
On June 4, Russian proxies shelled the Donetsk water filtration station yet again. The personnel of the station had to seek protection in the bomb shelter.

The Anti-Corruption Court: a step forward

On June 7, Ukraine’s Parliament (Verkhovna Rada) approved in the second reading and on the whole the draft law no.7440 on the High Anti-Corruption Court submitted by the President. The draft law was voted in by 315 MPs at the parliamentary plenary session last Thursday. Some of the provisions of the draft law were changed in the second reading after the consultations with the IMF. The most disputable was the provision on the role of the civic council consisting of international experts in the selection of the judges. At the same time, many experts gave a positive assessment of the law and of the latest amendments to it, suggesting that the voting in question may become a starting point for a new page in Ukraine ‘s fight against corruption.
Why is there such an urgent need for the Anti-Corruption Court? The setup of the Anti-Corruption Court is to complete the entire anti-corruption reform that started in Ukraine in 2015. Heads of the National Anti-Corruption Bureau (NABU) and the Specialized Anti-Corruption Prosecutor’s Office (SAPO) claimed that it is the independent anti-corruption court institution missing that was making it impossible for the detectives and prosecutors to make the high-profile cases result in convictions. In the two years of the agency’s existence, NABU detectives completed the investigation of 127 cases and passed them to the court. However, one-third of them have been never considered by the courts. Court decisions were made in just 29 cases, while most of them are the agreements with the secondary actors of corruption schemes who pled guilty. Three persons have been convicted. For example, hearings in the notorious case of the former Head of the State Fiscal Service Roman Nasirov are held once a month, so that in course of six months the prosecutors did not even have an opportunity to read out the indictment. If the situation does not change, the case of Nasirov will take years to consider.
International pressure. Should the Anti-corruption Court of Ukraine not be established, Ukraine would not get at least $3 billion. Firstly, the next tranche of the IMF loan worth $1.9 billion was at stake. The setup of the Anti-Corruption Court of Ukraine is the key IMF demand to provide the loan. Secondly, the European Parliament could revoke its decision to disburse one billion euro (approx. $1.16 billion) of financial assistance to Ukraine. Two more key demands of the IMF remain unaccomplished – to increase the gas price taking into account the import price, and to balance the state budget. The IMF insists that the budgetary expenditures have to be reduced. 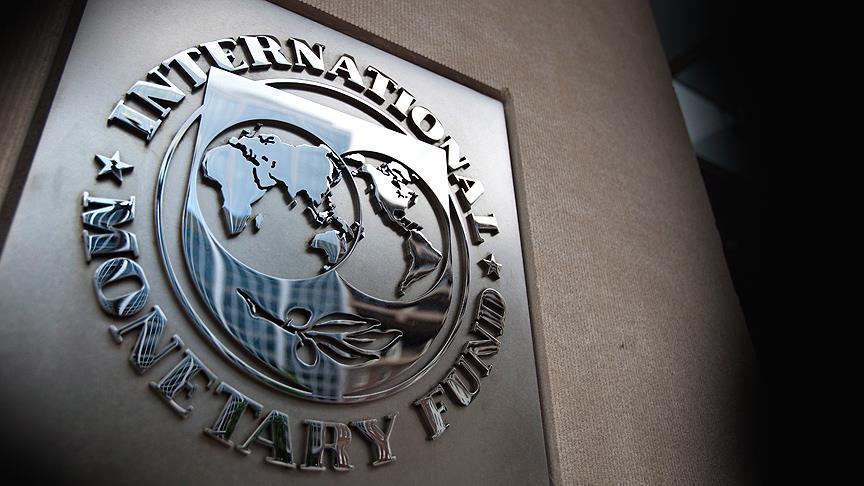 Oleg Sentsov and the exchange of prisoners with the Russian Federation 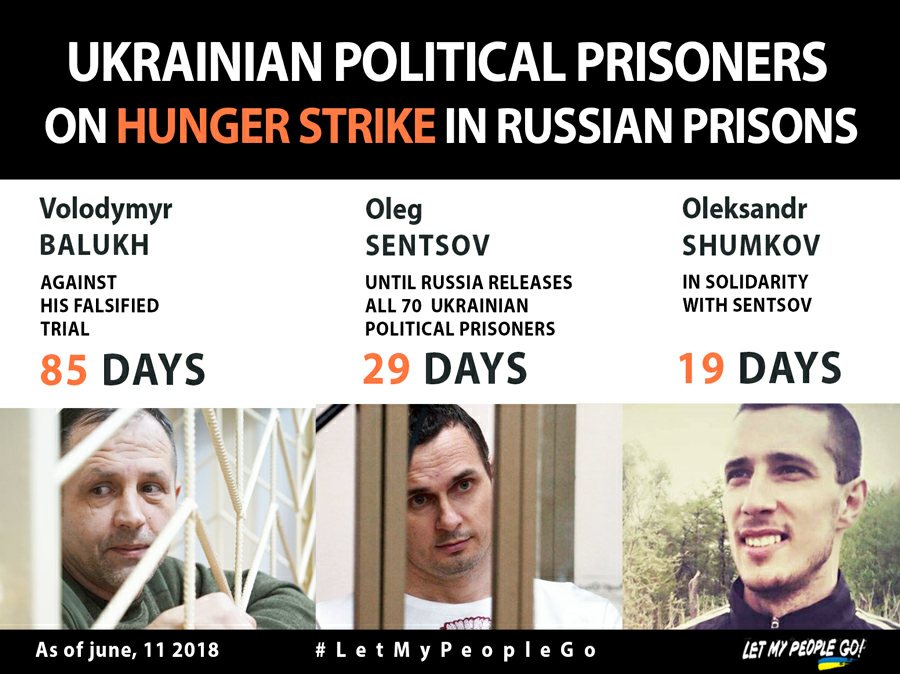 Possible prisoner exchange lists. The First Deputy Head of the Parliament Iryna Herashchenko said she had passed a letter listing 23 Russian prisoners to the representatives of the Russian Federation in the subgroups of the Trilateral Contact Group, asking them to officially respond as to the possibility to exchange them for Ukrainian political prisoners in Russia. The UK Foreign Office called on the Russian Federation to immediately release the Ukrainian political prisoners in Russia – Oleg Sentsov, Oleksandr Kolchenko, Oleksandr Shumkov, and Volodymyr Balukh. President of the European Council Donald Tusk supported the appeal of the European Film Academy to save the life of the Ukrainian film director Oleg Sentsov, unlawfully imprisoned in Russia. Tusk called on the European Union and the G7 countries to support the cause.
Will Sentsov be exchanged for Vyshynskyi? The President of the Russian Federation Vladimir Putin discussed with the Ukrainian President Petro Poroshenko the possible transfer of the arrested persons including the head of the news website RIA Novosti Ukraina (RIA News Ukraine) Kyrylo Vyshynskyi. Vyshynskyi was arrested last May under the charges of high treason. According to the prosecution, Vyshynskyi was in charge of placing propagandist information on the website. The phone call between the presidents of Ukraine and Russia was initiated by the Ukrainian President and took place on Saturday, thus the prisoner exchange is quite likely to happen.

A year of visa-free travel to the EU: half a million Ukrainians have traveled vise-free 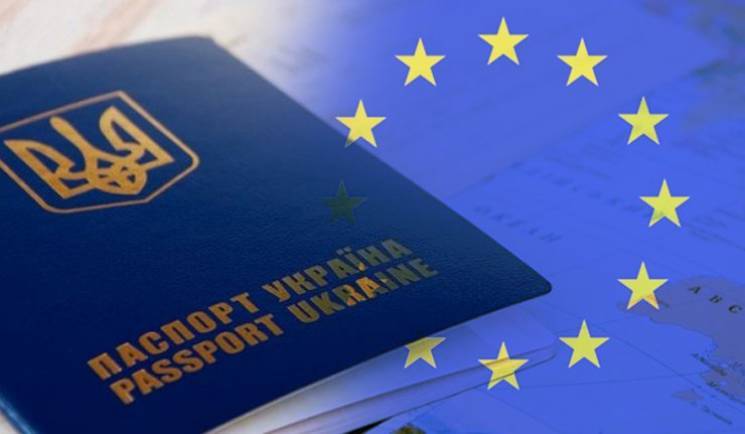 555 thousand travelers. Since the introduction of the visa-free regime with the European Union, Ukrainians crossed the border over 20.3 million times, 4.8 million of the visits were made by the holders of biometric passports with old visas, while over 555 thousand Ukrainians have enjoyed the benefits of the visa-free travel in full, reports the State Border Guard Service of Ukraine. A boom among those willing to travel without a visa was observed in the first months of the regime – Ukrainian border guards were registering up to 90 thousand Ukrainians crossing the border per month. Last November the figure already decreased to 32,5 thousand persons.
44 thousand Ukrainians denied entry to the EU. Frontex, the European Border and Coast Guard Agency, notified their Ukrainian colleagues that 44 thousand Ukrainians were denied entry to the EU in 2017, reported the First Deputy Head of the Border Guard Service of Ukraine Vasyl Servatiu. According to the official, European border guards named several typical reasons why the entry was denied to them. “First of all these are the undue purpose of travel, insufficient financial means and overstaying,” Servatiuk explained.

Opinion polling: ranking of politicians before the election campaign 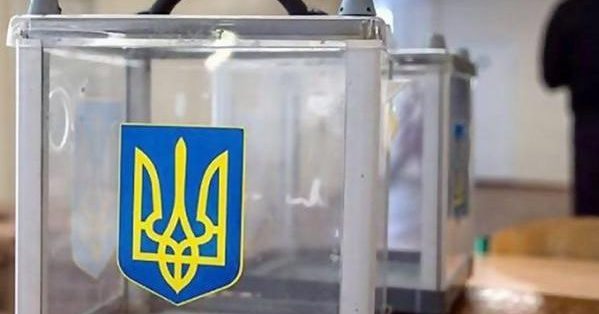 The Ilko Kucheriv Democratic Initiatives Foundation and the Razumkov Center released their recent ranking of the candidates at the next presidential elections as well as of the political parties. The majority of voters have not yet made up their mind, thus even the most popular politicians enjoy the support that varies between seven and 10 percent. Yuliya Tymoshenko (“Batkivshyna”, Motherland party) ranks first with 10 percent at hand, Anatoliy Hrytsenko (“Hromadyanska Pozytsia”, Civic Position party) is second with nine percent, Petro Poroshenko (Petro Poroshenko Bloc “Solidarnist” Solidarity) and Yuriy Boyko (“Opposition Bloc”)rank third with seven percent each, Oleh Lyashko (“Radical Party”) is the fourth with six percent of voters’ support. The difference in the percentages is within the limits of the statistical error. According to the research, about 62 percent of Ukrainians think that Ukraine needs new political leaders. About 60 percent of the interviewed want the civil society activists to enter politics.

A month has passed since UCMC published the first in the series of visual materials protesting against the Adidas’ ‘USSR’ clothing line. The company still refuses to withdraw it and present a public apology for this morally reprehensible sales tactic.
We encourage everyone to join this campaign and to use their network of contacts to deliver this message to the world.
#boycottAdidas