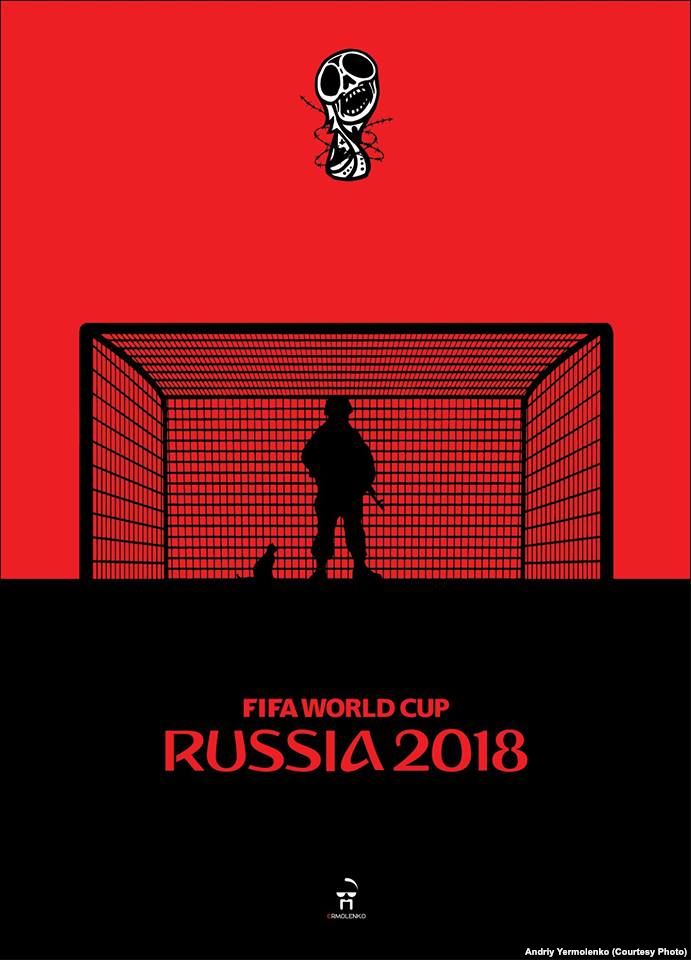 On June 14, the 2018 FIFA football World Cup kicked off in Russia. The country is hosting this important championship for the first time. For several months before the start of the sports event the debates were swirling: should the EU countries boycott the event? Is it possible to condemn Russia’s actions in the international arena without boycotting the championship? Today it is obvious that the diplomatic boycott has been supported by just few countries. The question of whether sports can stay “beyond politics” and if Russia is using sports to achieve its political goals, stays topical. UCMC takes a closer look at these issues in the following material.

“Our goal is to make all our guests – from football stars to common fans, feel the hospitality and benevolence of our people, get fascinated with Russia’s authentic, multinational culture and unique nature to make them want to return here once again,” the Russian President Putin stated at the Congress of the International Federation of Association Football (FIFA). Putin considers the right to hold the 2018 FIFA World Cup in Russia his personal victory. Despite the fact that the majority of the Western countries have no illusions as to the regime in Russia, only a few were courageous enough to actively oppose the holding of the prestigious sports competition.

Has Russia earned the right to host the World Cup? 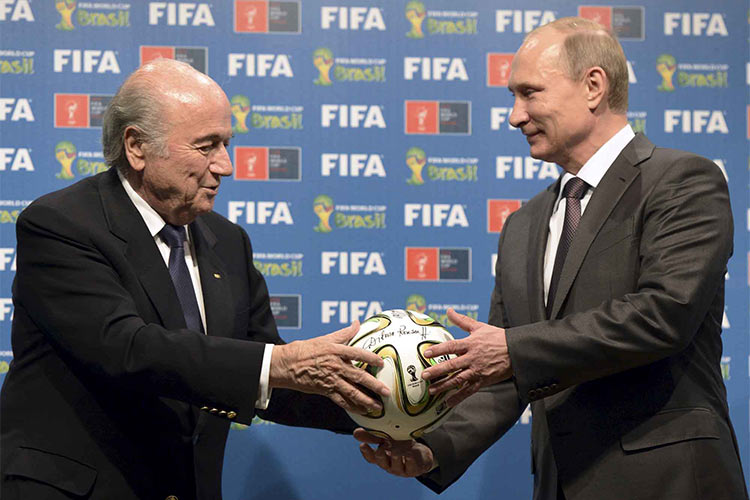 Russia was chosen the host of the 2018 World Cup by secret voting of the FIFA executive committee back in 2010. Back then hardly anyone regarded Moscow as a threat, and what is more, could foresee the strongest geopolitical fight to come between Russia and the western world since the Cold War.
Since then Russia has invaded Ukraine, supported Bashar al-Assad in Syria and changed the perception of information warfare. Russia’s hybrid war challenges the international legal order based on the rule of law but the West is still not sure how to respond.
Over the last several years many western countries have spoken at the high level about the possible boycotting of the 2018 FIFA World Cup in Russia as well as of its possible transfer to another country. They mentioned the annexation of Crimea, the war in Donbas, the downed Malaysia Airlines MH17 flight, the war in Syria and even the notorious Russia doping scandal. 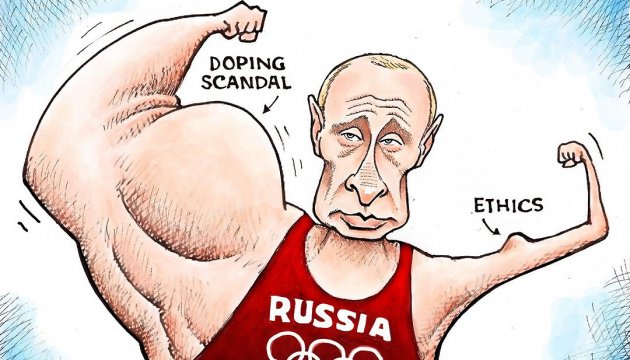 Corruption at FIFA. Already back in 2010 sports journalists, experts and FIFA insiders claimed that Russia had been selected in a dishonest way. Corruption at FIFA was investigated by the FBI and the Office of the Attorney General of Switzerland, while FIFA also conducted its own investigation in 2014. In 2015, Joseph Blatter resigned from the post of the FIFA president. After the resignation, he confirmed that it became possible for Russia to host the World Cup as a result of secret agreements. However, the official investigations provided no confirmation of that.

The boycott of the 1980 Olympic Games in the USSR: how it was

In 1980 the action was ideated by the US President Jimmy Carter. The United States Olympic Committee asked the International Olympic Committee to move the Games to another place or cancel them at all. The US President addressed the leaders of about 100 countries with a personal appeal to support the boycott.
At that time, all the European countries took part in the protest in one way or another. Athletes from 65 countries did not take part in the Games including the US, Canada, Turkey, South Korea, Japan and the Federal Republic of Germany. Some athletes from the UK, France, and Greece took part in the Olympic Games individually upon the consent from their Olympic Committees. However, the teams of the UK and France were much smaller than they would normally be.
Only the teams of five countries from the continent – Austria, Greece, Malta, Finland, and Sweden – performed with their national flags. All others performed with the flag of the International Olympic Committee. The winners had not their national anthems but the official anthem of the International Olympic Committee played.
On July 16, 1980, three days before the opening of the Moscow Olympics the US’s Philadelphia hosted the Liberty Bell Classic or the so-called Olympic Boycott Games, in which athletes from 29 countries to have boycotted the Moscow games participated.

Europe: who, how and why is boycotting the 2018 World Cup?

Four decades after the boycott of the Olympic Games in the USSR the western world is much less consolidated in its protest against the anti-European politics of today’s Russia. Despite the open letter the 60 MEPs published back in April calling on the governments of all the EU countries not to attend the sports contest, only four countries officially boycotted Russia: Ukraine, the UK, Iceland, and Australia. Moreover, the boycott is purely political, it does not mean that the national teams of the above countries (except for the Ukrainian team that did not make it through the selection) would ignore the World Cup itself. All the selected teams will play in Russia. It’s just the diplomatic and political dimensions that the boycott has. Moreover, its reasons do not include all the crimes of modern Russia and not even all of the most terrible ones.
The Skripal case: the UK, Iceland, and Australia. The pretext for the UK to boycott the World Cup was not the wars in Ukraine or Syria but the poisoning of the former Russian spy Sergey Skripal in the UK. The British authorities blamed it on Russia at the highest level. Back in March, amidst the scandal, the UK Prime Minister Theresa May stated in the Parliament that the representatives of the government and of the Royal Family will not come to Russia. While the national football team would take part in the Cup, the UK fans were advised on the possible “negative attitude” to the British citizens that they may encounter in Russia.
A similar position was taken by the authorities of Iceland the team of which will play in the championship. A week before the tournament started Australia joined the boycott, its team had also made it into the World Cup. Explaining the official decision Australian media did not just recall the Skripal case but also the International Investigation Team’s conclusion on the involvement of Russia into the downing of the Malaysian Airlines MH17 flight. Thirty-eight Australians were on that plane.
Poland: condemns the politics of the Russian Federation. Polish leaders claimed that due to their disagreement with Russia’s domestic and foreign policy, they will attend neither the opening ceremony nor the matches. “President Duda is not planning to visit the World Cup,” the Secretary of State Andrzej Dera stated on June 12. However, if the Polish national team makes it to the final, he will try to convince the President to go, Dera added.
Germany and France: ignoring but not boycotting officially. German politicians including the President, the Foreign Affairs Minister, the Vice-Chancellor and the Minister of Finance also stated they would not go to Russia. However, the German Chancellor Angela Merkel did not announce the official boycott. For what it concerns France, at the joint press conference with the Russian President Vladimir Putin during his visit to Russia, the President of France Emmanuel Macron promised that he will attend the game of France if the team gets to the semifinal. Later Macron changed his position, on June 10 at French TV channel he said that he plans to go to Russia if the French national team gets to the quarter-final.
The European Parliament: Sentsov, Crimea, and the freedoms. On the day of the World Cup opening, the European Parliament adopted a resolution calling on Russia to adhere to its domestic and international commitments as well as guarantee that human rights are respected. MEPs demand that the Russian authorities release immediately and unconditionally the Ukrainian film director Oleg Sentsov and over 70 Ukrainian citizens illegally imprisoned in Russia and in the occupied Crimea.
They also condemn the violation of the international law in occupied Crimea, in particular exercising the Russian law, massive militarization, and large-scale and systematic human rights violations on the peninsula.

The view from Ukraine: “football in the blood”

To Ukraine, it is obvious to a considerably larger extent than to any other country that holding the World Cup in the Russian Federation is not acceptable. There are more than sufficient reasons for the boycott: Russian aggression in Ukraine has resulted in over ten thousand people killed and over 1.5 million internally displaced. That is why the Ukrainian authorities called upon the Ukrainian citizens not to visit the World Cup in Russia.
Sentsov. Another campaign started both in Ukraine and internationally on May 16 calling to boycott the World Cup in Russia. A few days earlier, Oleg Sentsov, the Ukrainian film director sentenced in Russia to 20 years in prison on false charges of terrorism, started a hunger strike. 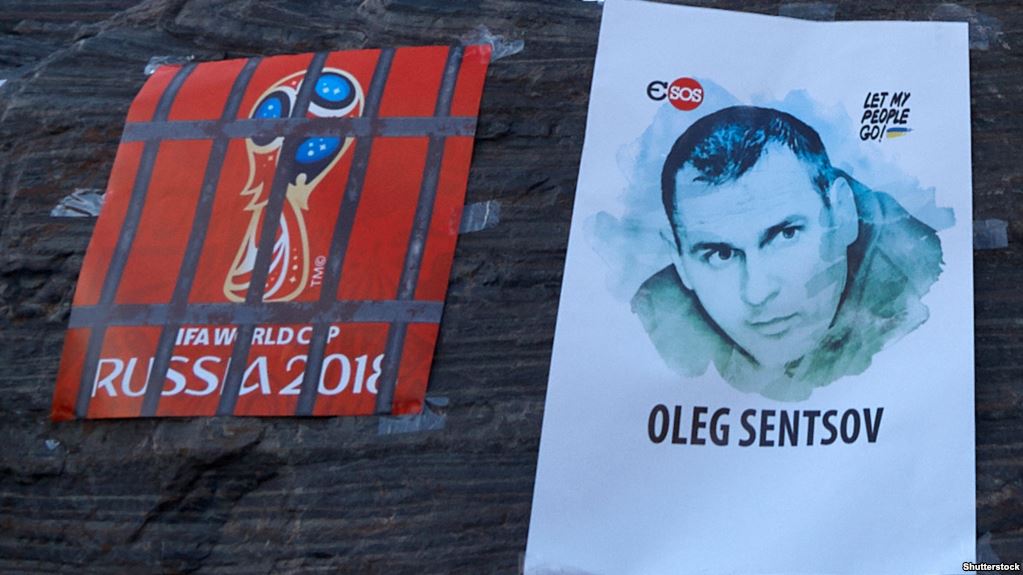 It was just the French satirical weekly magazine Charlie Hebdo that demonstrated the frankness of a kind as to the Putin’s football. 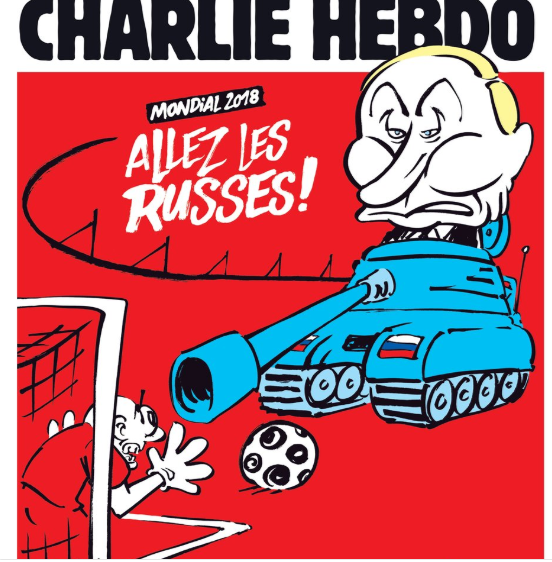 Artist Andriy Yermolenko: “It is my war. I can draw. If back in 2014 I had enough courage, I would probably be at the frontline, but I did not. I have enough courage to do what I can, and what I can is drawing.” 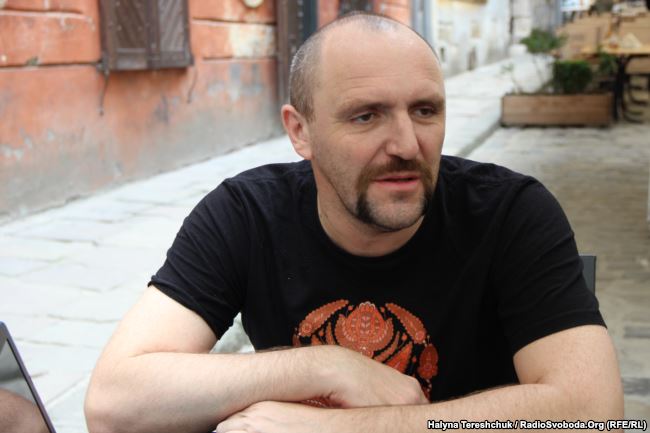 Artist Andriy Yermolenko: “I like football but I will not be watching the World Cup. And I am not advising it to anyone, to be honest. One cannot be calmly watching a show that is covered in blood, even if it is a very good concert or a very good show. Over the last years, Russia demonstrated itself as a terrorist that does not stick to either of the international doctrines. Starting from the chemical weapons and ending with interference into elections in other countries. It is scary! That’s what I am talking about in my posters.”

Media: one channel broadcasting. On June 6, 2018, the Parliamentary Committee on Freedom of Speech and Information Policy supported the draft provision banning the broadcasting of the official events of the World Cup in Russia to Ukraine. However, the Ukrainian Parliament (Verkhovna Rada) did not vote in the provision in question. In Ukraine, the matches of the 2018 World Cup will be broadcast by Inter TV channel. The channel has been subject to criticism for its consistent pro-Kremlin position. Other channels including the “Football” sports channel refused to broadcast the championship.
Will Ukrainians go to the World Cup? “I am warning Ukrainians against the travel to Putin’s Russia, as there is a real danger of being taken captive by Russian terrorists. Don’t increase the list of Putin’s prisoners for the exchange – don’t go to Russia,” the head of the Verkhovna Rada Andriy Parubiy said.
At the same time, as per the FIFA count, about six thousand Ukraine citizens purchased the tickets to the games. They are clearly a minority.

Ukraine has no illusions as to the nature of Putin’s regime, and don’t believe that football can be “beyond the politics”. In the end, the teams play under the flags of their countries, and the four years of the hybrid aggression have proved that the Kremlin is using to its benefit everything it is able to reach. Sports can be efficient soft power as culture has already proved to be.

“Sports is a big tribune. It is an opportunity for dictators to present themselves from a more positive side, not from the side of torture and killings,” summarizes sports journalist Vadym Skichko in a comment to Hromadske TV.

In any case, one will more likely agree with this statement than with Putin’s reassurances that the World Cup will become a chance to “feel the hospitality and benevolence” of the Russian people.