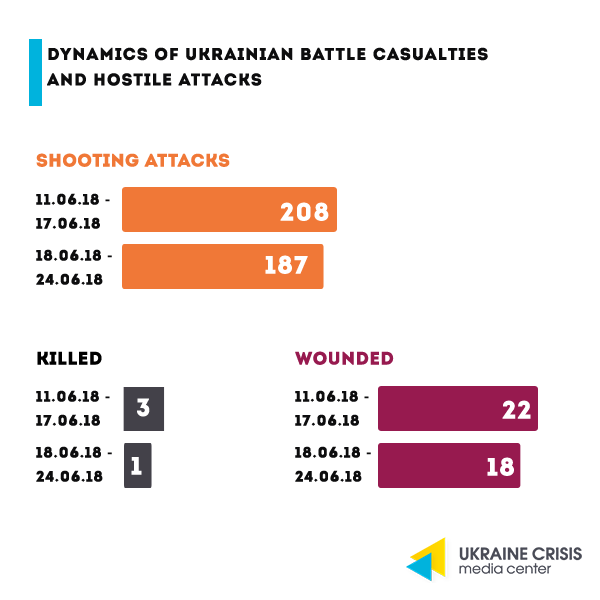 Over the last week the situation in the area of the Joint Forces Operation in eastern Ukraine stood stable and controlled. Russia-backed militants used small arms and grenade launchers in most combat incidents. In the dark time of the day militants were stepping up the number of attacks from Minsk-proscribed heavy artillery.

Tense situation stands in Novotoshkivske area in Luhansk region. Russia-backed militants opened fire from 122-mm artillery and 120-mm mortars alongside the use of small arms and grenade launchers.

On June 20, Russian proxies violated the ceasefire 30 times, used artillery and mortars in six of the incidents. In Mariupol area tense situation remains near Starohnativka, Chermalyk, Talakivka and Vodyane.

On June 25a Kremlin-controlled “court” of Simferopol in Crimea is to consider the claim on the conditional early release of the Crimean activist, political prisoner Volodymyr Balukh who has been on hunger strike for 98 days now. The so-called court in the annexed Crimea sentenced Balukh to three years and seven months in a penal settlement and assigned him a 10-thousand ruble fine in January 2018. He was charged with “ammunition storage”. 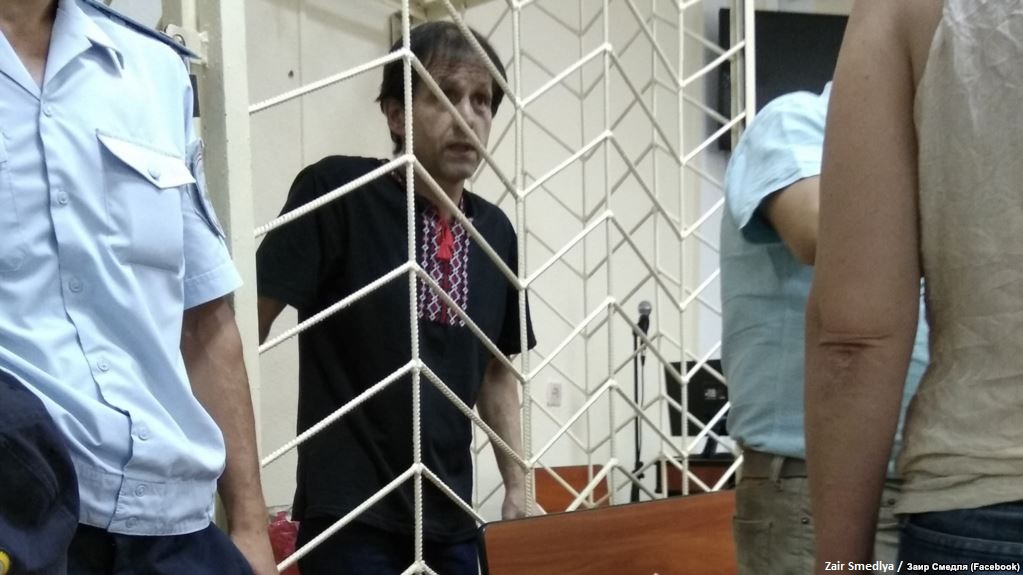 Volodymyr Balukh went on hunger strike on March 19 protesting against the fabricated case against him. He has lost 30kg of weight since then.

Later in the day on June 25 Zaliznychnyi “district court” of Simferopol rescheduled the hearing of the defense claim on the early conditional release of Volodymyr Balukh for July 5 explaining the decision with procedural reasons.

To remind, 64 Ukrainian political prisoners are kept in Russia and in the annexed Crimea, 27 of them are held in Russia. Fifty eight persons were detained either in Crimea or under the charges linked to the peninsula. The above numbers do not include the prisoners illegally held in eastern Ukraine in the areas that the Ukrainian government does not control.

The fight against corruption: President appoints a new auditor of NABU

On June 19, President Poroshenko appointed the former head of the Donetsk regional administration Pavlo Zhebrivskyi the third auditor of the National Anti-Corruption Bureau (NABU), and the last one required, ending thus an almost a year-and-a-half long political struggle for having the candidates appointed to the posts of NABU auditors. The civil society has criticized the move of the President Poroshenko, as Zhebrivskyi is known to be his long-standing ally but might be lacking the required work experience to be an auditor. 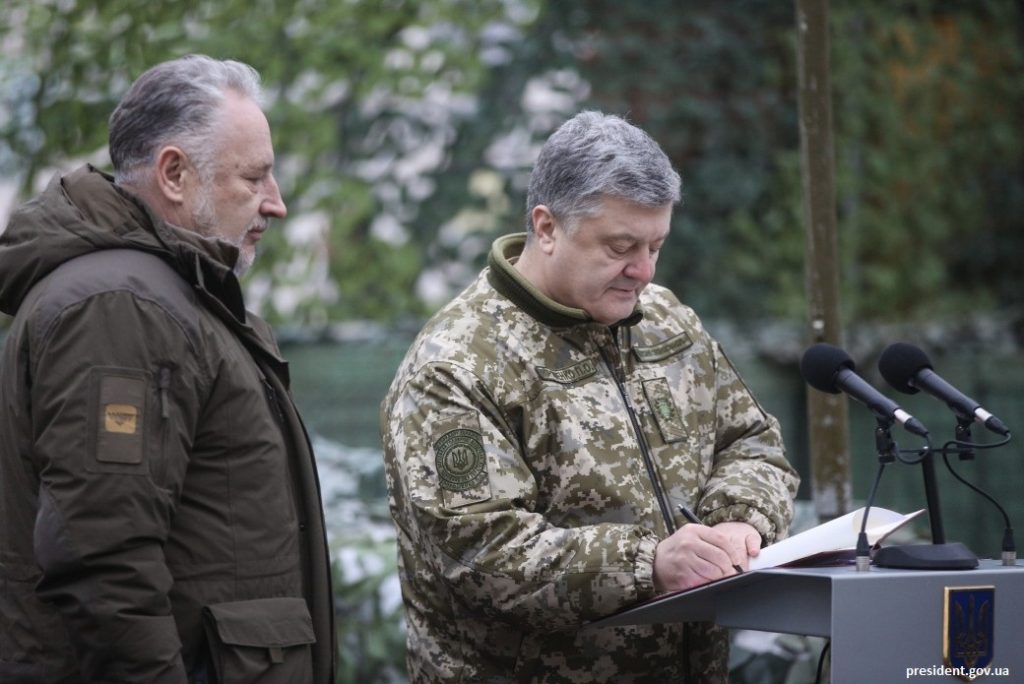 Who will be controlling NABU: auditors within parliamentary and governmental quotas. On June 7, 2018 the Parliament appointed renowned Ukrainian lawyerVolodymyr Vasylenko to the auditor’s post within its quota. His service list includes a series of diplomatic and legal assignments including in the UN agencies. The Cabinet of Ministers appointed auditor Mykhailo Buromenskyi, former head of the international law department in the Yaroslav Mudryi National Legal Academy of Ukraine and the director of the Institute of Applied Humanitarian Research. Buromenskyi used to be an ad hoc judge at the European Court of Human Rights and headed the Ukrainiandelegationat the Group of States against Corruption (GRECO).

The auditor within the presidential quota: “President’s ally”. Civic sector experts had no particular claims to the above two auditors, while they do have a number of questions to Pavlo Zhebrivskyi. Over the last three years he worked as the Head of the civic-military administration of the Donetsk region subordinated to the President. He has been friend and ally of the actual President since 2000s. How much of an independent figure can he be, becomes a topical question.

AccordingtothelawontheAnti-CorruptionBureau, a NABU auditor should be in possession of extensive work experience with international pre-trial investigation agencies, prosecutor’s offices, courts or international organizations as well as have the necessary auditing knowledge and skills.

Reaction of experts. Anti-Corruption Action Center states that Pavlo Zhebrivskyi was appointed to the post of the NABU auditor within the President’s quota with violation of law. They emphasize that in accordance with the Law on the National Anti-Corruption Bureau of Ukraine, its auditor has to be in possession of the work experience in international law enforcement or judicial agencies, or in international organizations, while Zhebrivskyi does not have one. According to the lawyer at the Anti-Corruption Action Center Olena Shcherban, appointment of a NABU auditor in violation of the law, can be contested in court.

Reaction of MPs. Head of the parliamentary committee on foreign affairs Hanna Hopko said she was disappointed with the appointment of Pavlo Zhebrivskyi to the post of the auditor. “Last night when we saw the presidential decree appointing Mr. Zhebrivskyi NABU’s auditor, it caused a weird disappointment. After the Maidan, the Revolution of Dignity, according to the existing requirements a NABU auditor has to be in possession of international experience. What we saw instead is how ‘dear friends’ are being appointed to such a responsible post,” MP Hopko said during the plenary meeting in the Parliament last Wednesday.

Volume of the shadow economy in Ukraine decreases

The volume of the shadow economy in Ukraine in 2017 decreased to 31 per cent of the GDP – or by four per cent compared to 2016, reports the Ministry for Economic Development and Trade of Ukraine on their web site.

According to the Ministry, more light on the shadow economy was cast resulting from the decrease of investment risks in particular, set against the background of relative macrofinancial stability and continuous economic reforming. At the same time the progress is being held back due to the low level of trust to the state agencies, considerable challenges to the stability of the financial system as well as due to the areas that the government does not control, the Ministry’s report says.

The video’s production was managed by the Ukrainian company Family Production, it was directed by Francois Rousselet, who earlier worked with Madonna, Depeche Mode and The Rolling Stones. Edith Piaf’s song “Non, je ne regrette rien” became the video’s soundtrack, while Kyiv’s Podilsko-Voskresenskyi bridge and the one of the premises of the Karpenko-Karyi National University of Theatre, Film and Television became the video’s locations.