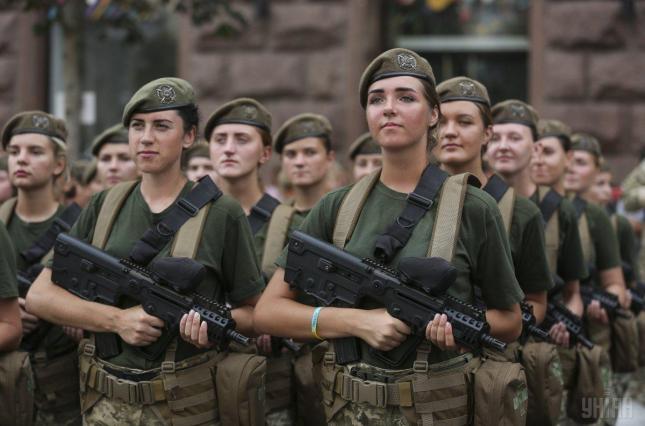 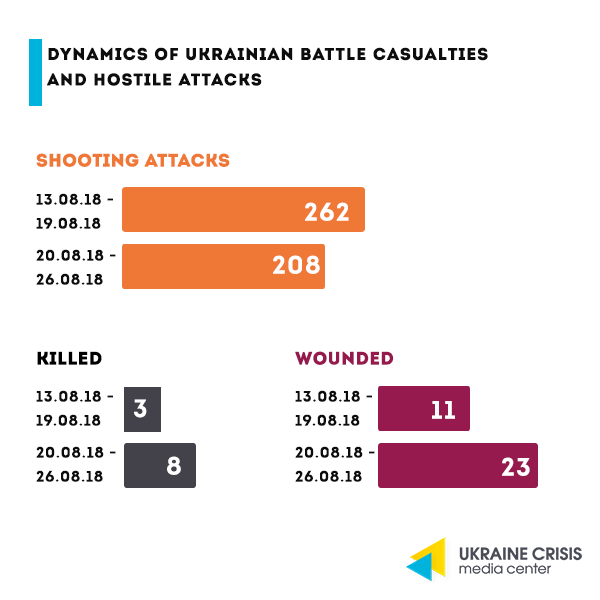 On August 23 the situation in the area of the Joint Forces operation was tense. Five Ukrainian troops were killed in action and seven more were wounded in action.

On August 25 Russia-backed militants fired from mortars in Luhansk sector – near Krymske, outside Svitlodarsk near Luhanske, near Horlivka in the area of Zaitseve and Pivdenne; as well as in Donetsk sector outside Avdiivka. Joint Forces repelled the hostile attack and stayed at their positions.

Yesterday one serviceman was wounded and one more incurred injuries in a blast of an explosive device when on a combat assignment.

Two more troops were killed and one injured as a result of careless handling of an explosive device.

EU’s assistance in rebuilding Donbas. The President of Ukraine Petro Poroshenko while visiting Avdiivka in Donetsk region revealed his intention to call on the EU to encourage each of its member states to take under the auspices rebuilding of a particular city or town in Donbas. According to the President Ukraine’s ambassadors abroad will be in charge of mobilizing the funds for restoring the infrastructure of Donbas. According to the President, the ambassadors are supposed to see in their own eyes what is happening in Donbas. On August 26 eighty diplomats alongside the military started to Donbas.

How Ukraine celebrated the 27thanniversary of its Independence

The 27thanniversary of the state independence was marked in Ukraine on August 24. On the occasion 250 military vehicles and weapons drove the Kyiv’s central street Khreshatyk, while about 4,5 thousand troops took part in the military parade. Servicewomen participated in the parade for the first time. Moreover military aviation was showcased in the sky for the first time since 2009. Another novelty at the parade came a prayer for the state army. 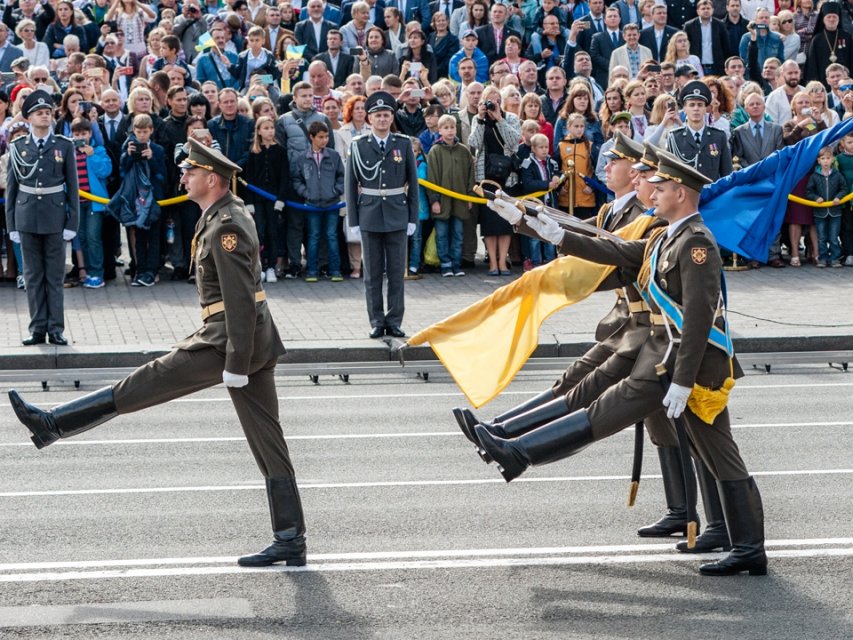 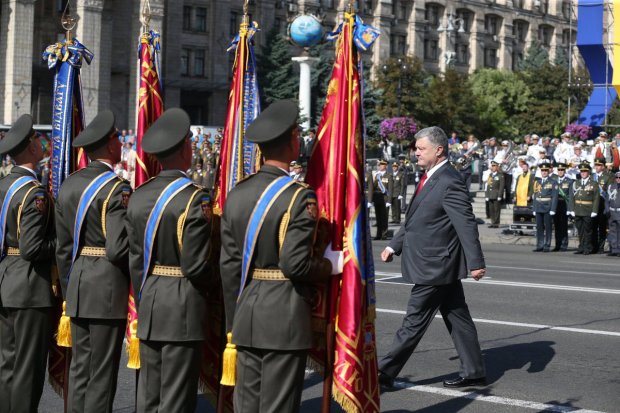 From Kyiv to Moscow: will the transport connection between Ukraine and Russia stay?

Last week Ukraine’s Minister of Infrastructure Volodymyr Omelyan announced the upcoming restrictions on transport connection with Russia. “Only bears will be walking to Moscow,” the Minister wrote in comments on Facebook. He refused to reveal the exact restrictions saying that one should wait for the official governmental decision on that. At the same time it is known that both bus and railway connection will be lifted. Respective document has been sent for consideration to the Cabinet of Ministers. 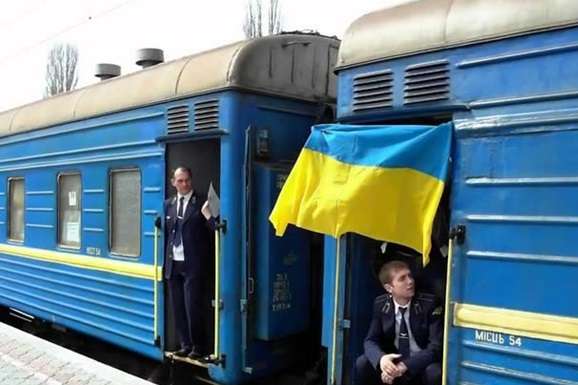 The direct transport connection between Russia and Ukraine has considerably shrunk over the past four years. In May 2014, Ukrainian Railways (Ukrzaliznytsia) announced that nine pairs of trains to Russia would be cancelled. Later that year in December Russian Railways (RZhD) cancelled four out of five trains to Ukraine.

In October 2015 Ukraine cancelled air connection with Russia naming revocation of flights to the annexed Crimea as the condition to bring the Russian flights back. In response Russia banned Ukrainian planes from using the Russian air space. The mutual ban remains in force.

Flying from Russia to Ukraine is now only possible through third countries. The most convenient option is a flight via Belarus where the local carrier Belavia started Kyiv-Moscow flights via Minsk right after the flight ban was issued.

The direct transport connection between Russia and Ukraine is possible by train or bus. According to Ukrzaliznytsia’s press-service the railway connection between Ukraine and Russia is provided by 13 pairs of trains, eight of which are Ukrainian ones, three Moldovan, one of the RZhD and one of the Azeri Railways.

At the same time Ukrzaliznytsia says the number of passenger on this direction is decreasing each year. In 2013 the company transported 5,1 million passengers between Russia and Ukraine, in 2014 – 2,2 million, in 2015 – 1,2 million, in 2016 – one million passengers. Last year Ukrzaliznytsia transported 900 thousand passengers. Over the seven months of 2018 450 thousand passengers took trains to Russia, making the number 89 thousand less than last year.

At the moment the future of the transport connection between the countries is unknown, it is expected that the official document will clarify the situation.

New US sanctions against the Russian Federation came in force 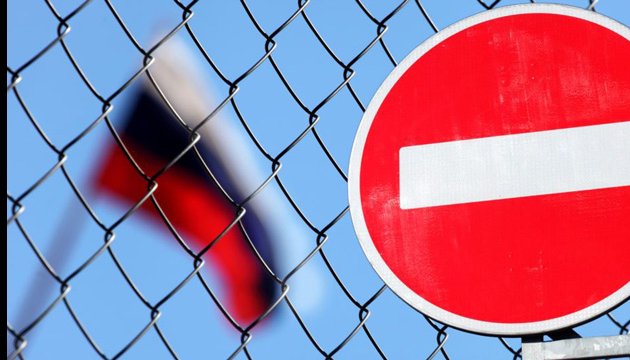 On August 22 US rolled out the first round of the new sanctions against Russia, the sanctions were introduced as a response to the poisoning of Sergey Skripal and his daughter in UK’s Salisbury. The sanctions were announced by the US Department of State on August 8. The first round sees restrictions on exporting of the technologies that might be used for military purpose and are not directed against any particular company. The US media earlier reported that gas turbines and industrial e-equipment may come under the ban. While the actual list of restricted products may turn to be quite brief as the administration of Barack Obama had already introduced similar restrictions back in 2014.

Economy: strategy for managing the state debt and shadow economy

How to proceed with the state debt? The government approved the mid-term strategy for managing the state debt in 2018-2020. Respective decision was adopted at the governmental sitting on August 22. At the meeting Oksana Makarova, acting Finance Minister, said that in course of the two upcoming years the Ministry expects to decrease Ukraine’s state debt to the average level of the developing countries. Between 2005 and 2013 Ukraine’s state debt grew from USD 12,5 billion to USD 60 billion. 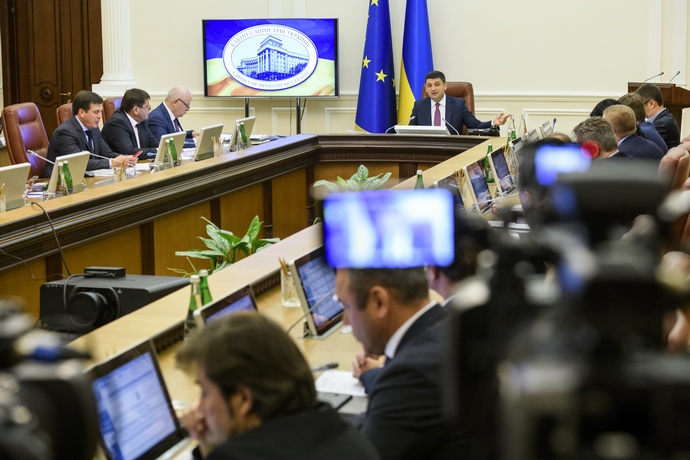 “Our state debt is approximately eight years old. It will take 6,2 years to repay the external debt, and about 10 years to repay the internal one. (…) The strategy aims at achieving [the ratio between the debt and the GDP] equal to 52 per cent of the GDP next year, by the end of 2020 it should not exceed 49 per cent,” Makarova noted. She said the strategic document on managing the debt will be public and will be placed on the web site of the Finance Ministry.

Opinion polling: Euro 2012, Euromaidan and Eurovision 2017 are the events to have drawn Ukraine’s most positive image 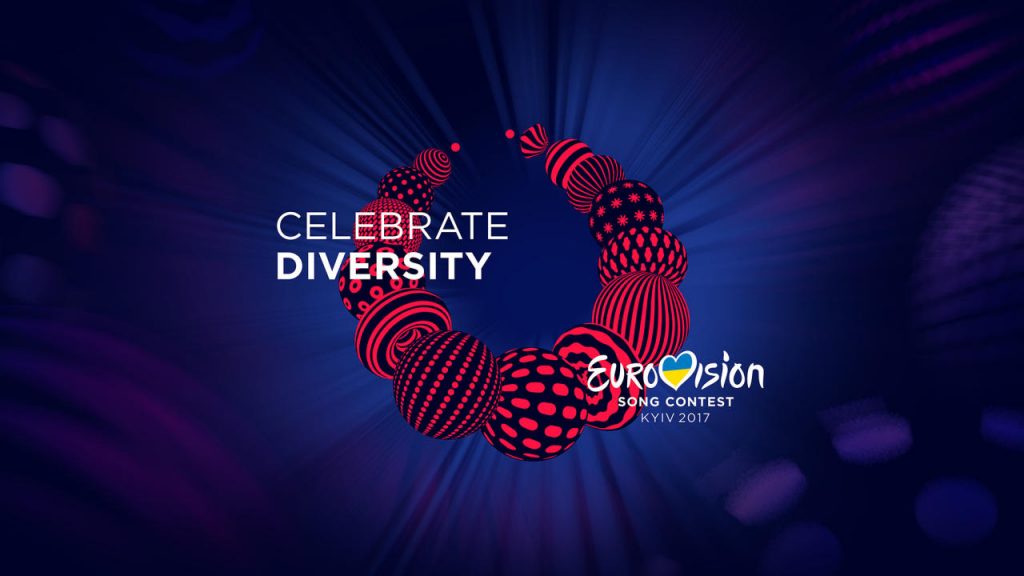 These are the results of the opinion poll conducted by the Kantar TNS marketing research company in July 2018.

Almost each fourth Ukrainian considers Euro 2012 a very positive event for Ukraine’s image. The 2012 UEFA European Championship was the main event to have positively affected Ukraine’s image, 23 per cent of the interviewed said.

At the same time 21 per cent of respondents named Euromaidan the most positive event for Ukraine’s image over the last 25 years. The Orange Revolution of 2004 is regarded to be so by just four per cent of Ukrainians.

Fifteen per cent of Ukrainians see Eurovision Song Contest 2017 as the most positive event for Ukraine’s image, Eurovision 2005 is seen being of the same importance by six per cent of respondents, seven per cent consider the adoption of the Constitution in 1996 such an event.

“Cultural, sports and artistic events are perceived in the most positive way today. Ukrainians have always welcomed foreign guests in a warm and hospitable way, these are exactly the events that are forming the positive image both in the eyes of Ukrainians and of the foreign guests. It depends on everyone without exaggeration, from a border guard officer to a volunteer on the spot. I am also happy that Eurovision 2017 was highly appreciated by not only the international community but by Ukrainians as well. Almost each sixth Ukrainian considers Eurovision 2017 being the most successful event to have contributed to Ukraine’s positive image. It comes as a well-deserved and high appraisal of the work by the team of thousands professionals and volunteers who worked with devotion to successfully hold the Song Contest in Ukraine in times that are not simple for all of us,” said Pavlo Hrytsak, Executive Producer of Eurovision 2017.