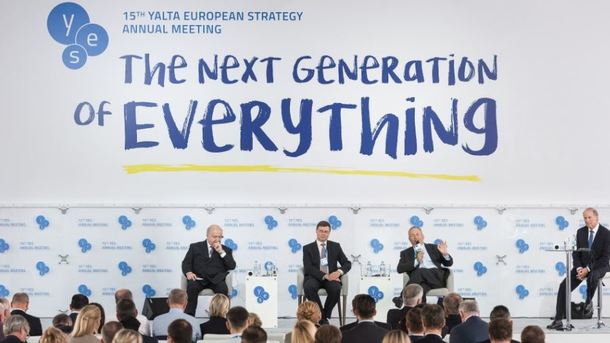 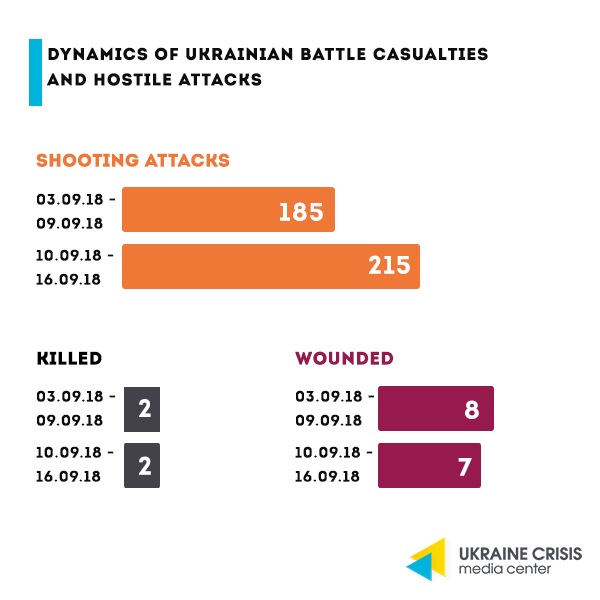 Russia-backed militants were conducting precision fire from grenade launchers, heavy machine guns and small arms. They also fired from 82-mm mortars upon the Joint Forces’ positions near Chermalyk, Hnutove and Vodiane as well as from 120-mm mortars near Chermalyk and Krymske. Ukrainian strongholds outside Krymske, Troitske, Chermalyk and Hnutove came under fire from the weapons mounted on infantry fighting vehicles. Militants used antitank guided missiles near Novotoshkivske and Hranitne.

On September 13, Russian proxies fired from the Minsk-proscribed weapons upon Vodiane, in Mariupol direction. Militants also fired five 120-mm mortar rounds upon the residential area in eastern outskirts of Vodiane from the occupied Uzhivka. No buildings were damaged and no civilians were affected.

On September 13-15 Kyiv hosted the 15th Yalta European Strategy (YES) Annual Meeting themed “The Next Generation of Everything” and organized by the Victor Pinchuk Foundation. YES is a leading forum seeing Ukraine’s European future discussed in the global context. Prior to the annexation of Crimea it used to be held in Yalta. This year the meeting was not quite usual: in addition to the intense program, on the second day of the conference Pinchuk actually held a “presentation” for the key candidates for president. In course of the two days Petro Poroshenko, Yulia Tymoshenko, Anatoliy Hrytsenko as well as musician Svyatoslav Vakarchuk who might also campaign for the presidency went on stage. Their speeches may well be considered draft election campaign presentations for the elites. UCMC takes a look at their key statements.

Petro Poroshenko: a pro-EU candidate. The President of Ukraine Petro Poroshenko positions himself as the best candidate out of the existing ones. At the YES meeting he said Russia is making stakes at the presidential candidates whose position is beneficial to it. “So we have not approximate, but accurate idea of ​​the plans of the Kremlin. We know whom they want to see in the second round of the presidential election, and, thank God, my name is not in the plans of the Kremlin,” the President reassured.

Poroshenko also stated that the historical project that the European Union is may well be considered completed only with Ukraine on board, as it is the Ukrainian border that is the borderline of the modern European civilization. “Ukraine is a huge potential of human power and faith and we have demonstrated it many times. Ukraine is a Euro-optimistic country with a unique belief in Europe. As for the European Union, I would like to emphasize that this grandiose historical project can only be complete with Ukraine. Why? Because not Ural, but our north-eastern border is the border of modern European civilization. Ukrainian border, not Ural,” the President said.

Yulia Tymoshenko: “Integration of the occupied territories that will remain under the control of Russia is unacceptable.” 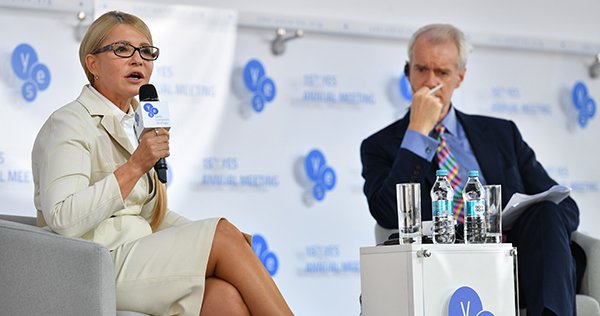 Yulia Tymoshenko will be emphasizing her political experience. In her speech she was saying how important it is for Ukraine to become an EU and NATO member. She is thus trying to prove to the voters that Poroshenko is not the only pro-European politician who brings Ukraine closer to the EU and protects it from the Russian aggression. “We need peace, but not at the price of the capitulation of Ukraine. It’s no good to offer Ukraine ways out which, somehow, turn certain parts of its territory into semi-Ukrainian areas, or re-integrate them into Ukraine while remaining fully subordinate to the aggressor country. This cannot come to pass. We need a real peace,” Tymoshenko said. The politician also emphasized that Crimea must not be removed from the agenda under any circumstances.

Anatoliy Hrytsenko: “Building a successful Ukraine requires effective protection of freedoms and property”. Leader of the Civic Position (Hromadyanska Posytsia) Hrytsenko will be exploiting the image of the most honest candidate for the presidency during the upcoming elections. “You can see me. I came here with no security and I will go without one. (…) No oligarch is standing behind me, I am real, I have a vision and I am ready to do the job,” Hrytsenko said. In his speech he emphasized that in order to protect citizens’ rights efficient justice needs to be secured, anticorruption agencies’ work intensified, the Antimonopoly Committee reinforced as well as the state’s monopoly on law enforcement needs to be restored. “We must protect rights, freedoms and property… There is no democracy without a sound economic base,” the leader of the Civic Position party said.

Svyatoslav Vakarchuk: “The power in Ukraine needs to be taken by the people whom the society trusts”. Singer Svyatoslav Vakarchuk who is being included in all public opinion polls on presidential elections over the last year, has not yet announced his intention to candidate. At the same time in his speech he emphasized that Ukraine is living the crisis of trust to the actual authorities. “Today judges are fully trusted by one per cent of the population. Is this normal?! In some other aspects they are being more or less trusted by seven more per cent. Do you think that old judges have the moral right to renew the judiciary, is there common sense in it? (…) People whom the society trusts need to take power in their hands,” he said adding that he is ready to work to make the changes in the country happen. When asked by BBC HARDtalk presenter, Stephen Sackur about his plans to run for the presidency in Ukraine, Vakarchuk responded: “What I really like about show-business is the possibility to keep the tension…  Sometimes it does not necessarily has to be the YES conference, you may meet someone on the street, talk to a person and make the decision during this conversation.”

Donbas, Minsk and the Sea of Azov – the U.S. Special Representative for Ukraine Negotiations Kurt Volker

The U.S. Special Representative for Ukraine Negotiations Kurt Volker spoke at the YES meeting. We herewith cite his most important quotes and statements. 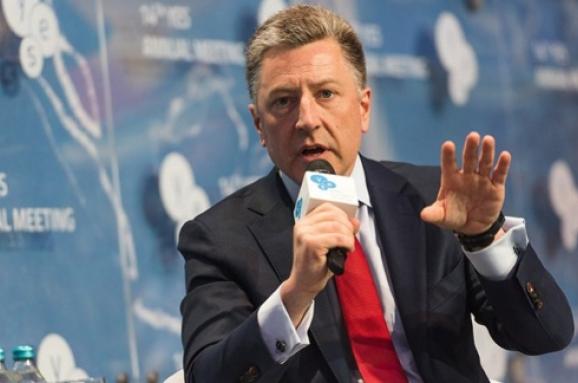 Donbas still needs the international attention. The U.S. and the EU should not loosen the attention to the situation in Donbas, Kurt Volker said. “We shall not fall asleep and forget about this. All of our societies and governmental bodies have to direct the spotlight at this humanitarian disaster, as it is just a few hours to fly from Berlin or Munich,” he explained.

Minsk is not working. Ukraine has fulfilled its part of commitments as per the Minsk agreements, Kurt Volker said. It has drafted the laws on local elections, amnesty etc.The problem is it cannot be implemented in the occupied territories. That’s why we need to demand their de-occupation. And it is very much important that Ukraine extends the law on the special status not to give a possibility to Russia to use the accusations towards Ukraine, Volker continued.“We have stuck up for the Minsk process. Those steps Ukraine has to make (special status, local elections) – they are not possible unless there are security guarantees. This is why we offered a peacekeeping contingent, which will replace the Russian forces and will make it truly safe. This offer is on the desk, Russia should take it more seriously,” he added.

The situation in the Sea of Azov. The U.S. takes the presence of the Russian military in the Sea of Azov as aggressive and provocative steps, Kurt Volker said. We do not accept these claims of Russia on the offshore areas and think that the presence of the Russian military there is in fact very aggressive and provocative steps, Volker said at a briefing on the margins of YES in Kyiv.

Economy: EU’s macroeconomic assistance and cooperation with the IMF 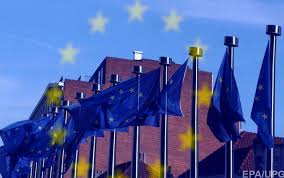 EUR one billion of EU’s macroeconomic assistance. Last week Vice President of the European Commission Valdis Dombrovskis, acting Finance Minister Oksana Markarova and Head of the National Bank Yakiv Smoliy signed a credit agreement for Ukraine to receive EUR one billion of EU’s macrofinancial assistance. The assistance will be delivered in two equal tranches, EUR 500 million each. The first tranche is to get to Ukraine this autumn after the parties finalize their internal procedures required for the signed documents to come into force as well as after Ukraine fulfills the conditions required for the first tranche.

To get the EU’s macrofinancial assistance Ukraine will need to fulfill its obligations under the third program as well as to hold small-scale privatization, said Ivanna Klympush-Tsintsadze, Vice-Prime-Minister for European and Euro-Atlantic Integration of Ukraine. “The main conditions for the first tranche will be the same ones that we did not implement for the past program, our homework,” she told the Interfax news agency on the margins of the 15thYES Annual Meeting. The Vice Prime Minister also added that small-scale privatization will be one of the new conditions.

Restarting cooperation with the IMF. The International Monetary Fund replaced the assistance program for Ukraine from EEF to stand-by. The stand-by international assistance program is provided to the countries that passed the pre-default stage. Earlier the Finance Ministry said that Ukraine had fulfilled most of its commitments towards the IMF. Ukraine restarted cooperation with the IMF requesting a four-year extended arrangement program worth of USD 17,5 billion in 2015 following a more than four year break.