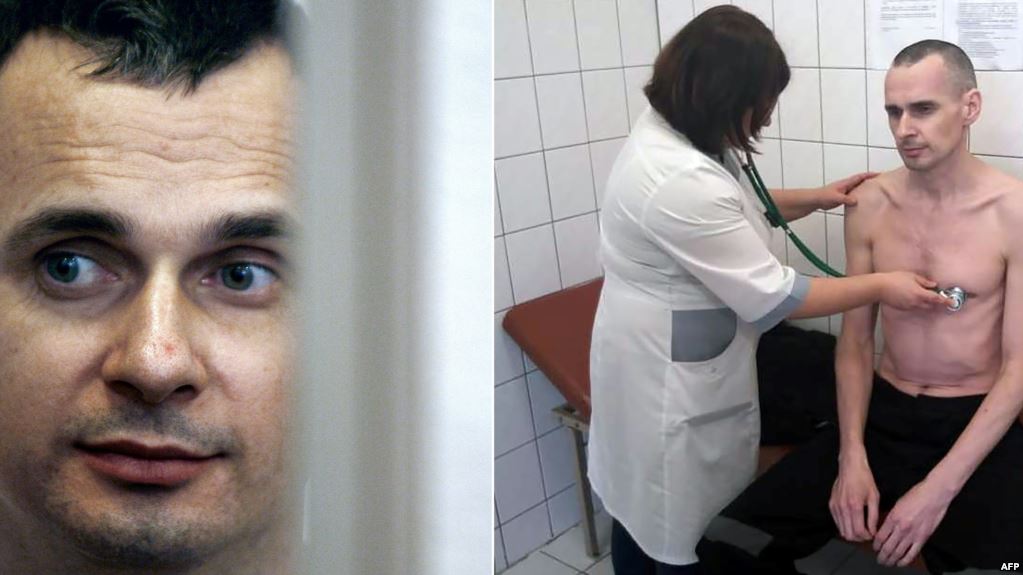 On October 5 the Ukrainian film director Oleg Sentsov illegally sentenced to 20 years in prison in Russia stopped the hunger strike that lasted 145 days. The information first came from the Russian Federal Penitentiary Service and quickly got into the Russian media. For a few hours that followed the Ukrainian side was refusing to comment waiting for the confirmation from Sentsov’s lawyer and his cousin. Later Oleg’s hand-written note was released online.

The statement by the Russian Federal Penitentiary Service. On October 5 at 11:48 the Federal Penitentiary Service of the Russian Federation released a statement saying that Sentsov gave a written consent to consume food. “Sentenced Oleg Sentsov gave a written consent to consume food, so consultations with the best Moscow nutritionists were held to design the most suitable menu for him. The menu includes the necessary food ration that will allow Oleg Sentsov to make a transition from the state of long-lasting refusal from full-fledged diet with no complications,” the statement on the web site of the service says.

According to Interfax, Fedotov was respectively informed by high-level officials of the Federal Penitentiary Service in the morning on October 5.

“High-level officials of the Federal Penitentiary Service have informed me this morning that Oleg Sentsov wrote a claim stating that he ends the hunger strike. He wrote it in the presence of the lawyers,” Fedotov said.

Oleg’s letter: hunger strike stopped due to threats of force-feeding.

“Due to the critical condition of my health as well as to the pathological changes of my internal organs, force-feeding was planned to be applied to me in the nearest time. My opinion is not being considered for that. I am allegedly not in the position to adequately assess my health level and the threat it is facing. Force-feeding will be held as a critical care measure to save the life of the patient. In these conditions I have to stop my hunger strike effective tomorrow October 6, 2018.

One hundred and forty five days of the fight, 20 kg of weight lost as well as the broken body but my goal has not been achieved. I am grateful to everyone who supported me and I am asking for a pardon those whose expectations I did not meet… 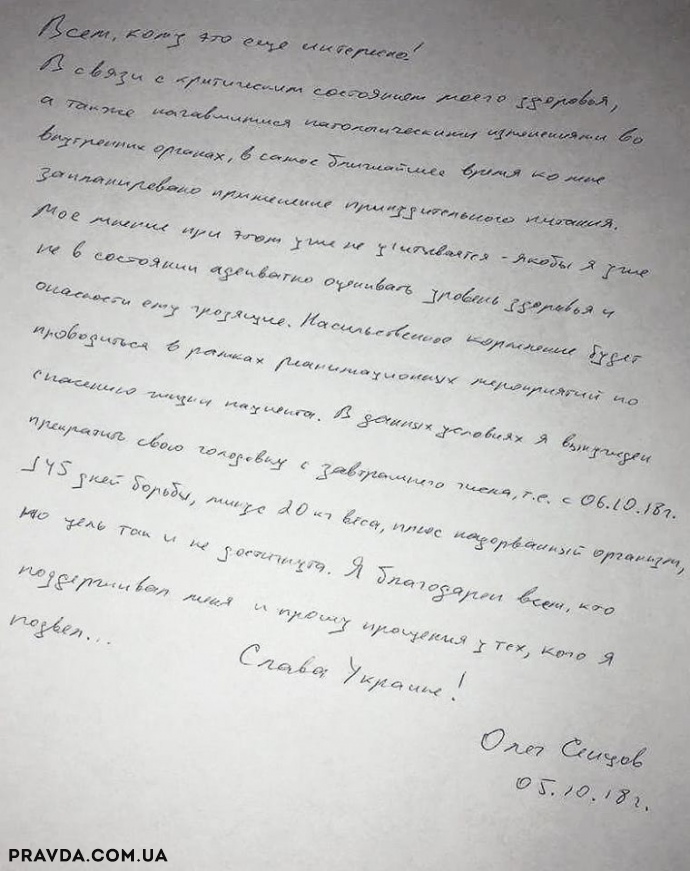 “According to the lawyer, Sentsov’s condition is extremely bad. He is very weak and exhausted. His decision to stop the hunger strike comes from the recent planned examination in the city hospital, when ultrasound scan and other tests were made discovering that his internal organs are in critical condition. He was told that usually people in a similar condition stay at the intensive care unit, while he miraculously keeps moving by himself, his liver started failing, his kidneys are sore, they are almost not functioning, he’s got heart problems, he has developed ischemia, there are problems with his intestine, stomach etc.,” the film director said.

On September 29 the Federal Penitentiary Service published a photo of Sentsov and said that he was taken to hospital for examination. On September 28 his treatment was “corrected”, as the statement said.

To remind, Oleg Sentsov was detained on May 11, 2014 in the occupied Crimea and charged with plotting of a terrorist act on the peninsula. He was also charged with illegal possession of weapons and explosives. In August 2015 in Russia Sentsov was sentenced to 20 years in a maximum security prison. He currently serves his term in Labytnangi. On May 14, 2018 Sentsov went on hunger strike demanding that all Ukrainian political prisoners held in Russia and in the occupied Crimea are released.