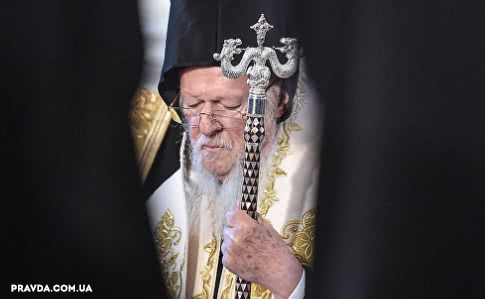 The church standoff between Kyiv and Moscow has lasted for centuries, but reached its maximum tension over the last six months. On April 19, 2018 the Verkhovna Rada (the Parliament) of Ukraine supported the President’s appeal to establish the Ukrainian single, autocephalous, autonomous church. Back then the leaders of Ukrainian churches called on the Patriarch Bartholomew of Constantinople to grant Ukraine the permission to create the single church. Whether the grant of autocephaly, or the Tomos, is provided was of concern not only to the Orthodox Christians but to the followers of other religions and to quite a number of atheists as well. The issue is not just religious but also largely political, as the Moscow Patriarchate church is Kremlin’s soft power in times of Russia’s military aggression against Ukraine; while Kremlin’s unwillingness to let Ukraine go is its imperialist reflex set to preserve its power.

On October 11, 2018 the Ecumenical Patriarch Bartholomew in Constantinople confirmed that Ukraine will be granted the Tomos – meaning that Ukraine’s independent autocephalous church is recognized. UCMC takes a look at what made it happen, what is going to change and what to expect next.

Read also: “Religion and politics: key things to know as Kyiv and Moscow clash in a new church disagreement” and “Church diplomacy: Kyiv between Moscow and Constantinople” 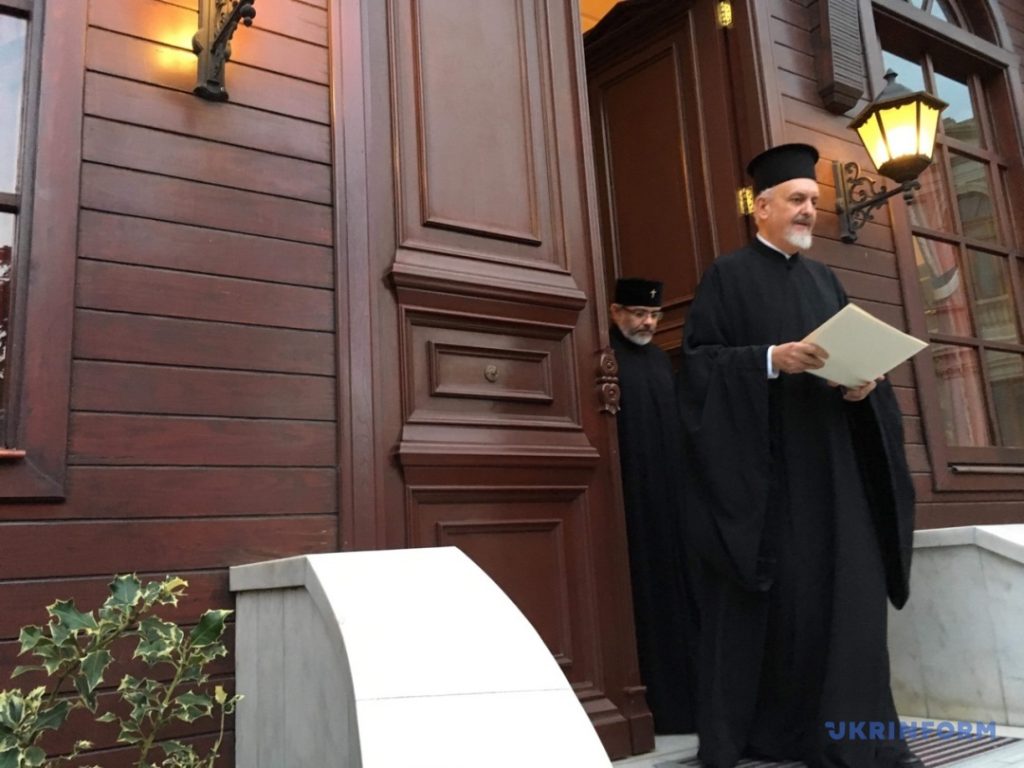 What decisions did Constantinople make?

The decision of the Synod (church council) of October 11 consists of five points that we quote below. 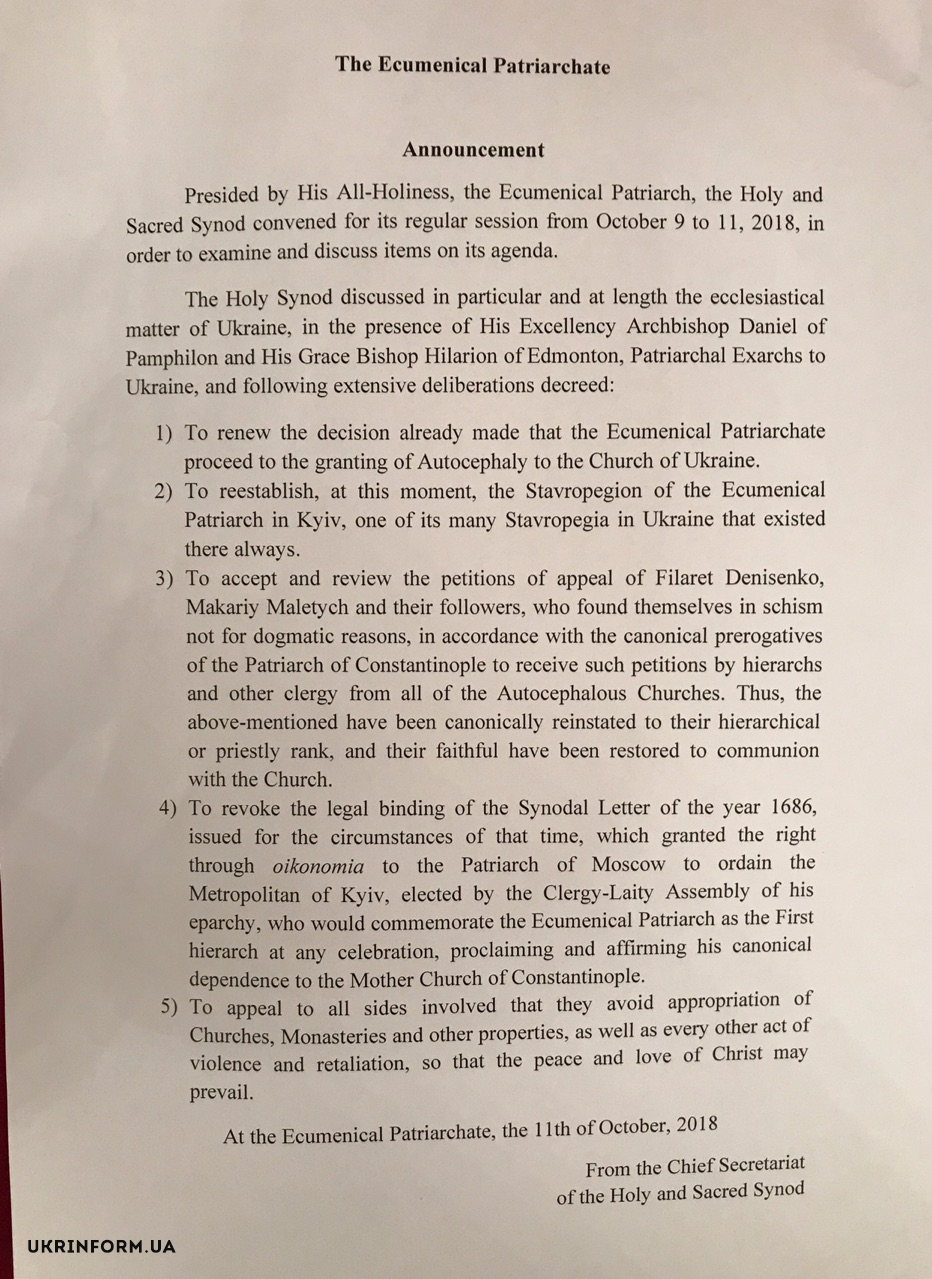 Why is it possible now?

The Ukrainian Church has been fighting for centuries to get independence from Moscow. In Ukraine’s newest history almost each president had autocephaly of the Ukrainian Church in his agenda. Leonid Kuchma and Viktor Yushchenko were the ones to have taken steps in this direction, but those attempts were not successful.

There are several reasons why autocephaly for the Ukrainian Church has become real exactly now, they are not much linked to each other.

The first reason is political.Despite the lack of exact details it is quite obvious that the Ukrainian President Petro Poroshenko has managed to convince the President of Turkey Recep Tayyip Erdogan if not to help get the Tomos, then to at least not impede the process. The Patriarchate of Constantinople is based in Istanbul and does take into consideration the position of the Turkish authorities. The latter, on the one hand, are not very enthusiastic about having the role of the “Greek” Patriarch reinforced, on the other, they never wanted to see the relations with Russia deteriorating. It is yet unknown what made Erdogan take no action as to the “Ukrainian church issue”.

The second reason is church-related.The Ecumenical and the Moscow Patriarchates have been long fighting an undeclared war over the domination being the fight between the most influential church and the biggest one. The actual no-return point in this war became the Orthodox Churches council on Crete in 2016 that was supposed to become the first one in more than 12 centuries since the last ecumenical council. The council of 2016 was said to be nearly perceived as his life’s task by Patriarch Bartholomew. The council’s status of ecumenical was derailed last minute as the Russian church refused to come and talked the patriarchs dependent on it to also ignore Bartholomew’s invitation. It came as a public slap in the face to the Ecumenical Patriarchate. Granting Ukraine the Tomos is going to weaken the positions of the Russian Church.

It is obvious that the victory at the church front has become possible also due to the efforts of the actual President Petro Poroshenko. It is also obvious that the Tomos is going to produce a positive effect on his campaigning chances at the upcoming elections as he has managed to achieve what neither of his predecessors could. “As we’re now approaching the successful result, many say that it will be a president’s bonus ahead of the elections. But at the start of this way there were no guarantees that it will result in success. Earlier attempts on this way were not successful,” says Yevstratiy Zoria, Archbishop of Chernihiv and Nizhyn, secretary of the Holy Synod of the Ukrainian Orthodox Church of Kyiv Patriarchate. 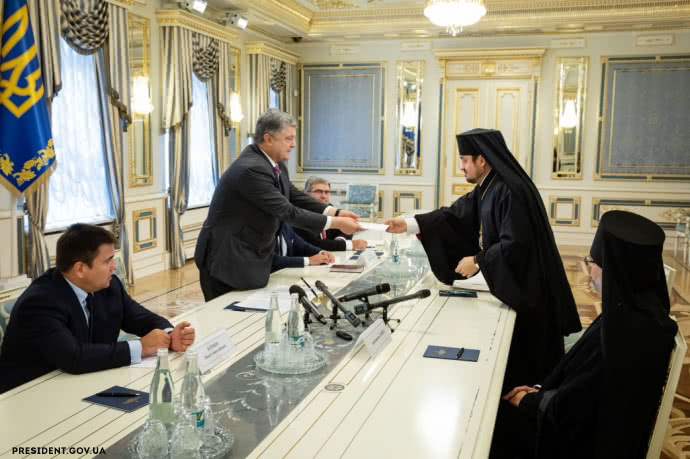 “All (Ukrainian) presidents used to have their own opinion on that. But because it is a very complex and sensitive issue, even though they wanted to, they could not make this way to get the positive result. The actual President did engage in it, while realizing that the result is not guaranteed. When comes the success, many claim to be behind it. If Petro Oleksiyovych (Poroshenko) had not had seven-hour long negotiations with the Ecumenical Patriarch the next day after Easter, we would still be just talking the talks.”

Electing the Church leader. The Council consisting of the bishops favoring autocephaly will choose the head of the autocephalous Ukrainian Orthodox Church. Most bishops are hierarchs of the Kyiv Patriarchate and will present Patriarch Filaret as the candidate. Metropolitan Makariy, head of the Ukrainian Autocephalous Orthodox Church, said a number of times that he will not be running for the Patriarch’s post.

The bishops coming from the Moscow Patriarchate may also present their candidate but it is quite unlikely that he will be chosen as their number is quite small.

The Tomos. The draft Tomos is already compiled, said Archimandrite Kyrylo (Hovorun), a Moscow Patriarchate priest actively supporting autocephaly, several months ago. The text of the document issued by the Patriach was written by the leading experts on canonical law and church history. The document states historic prerequisites for granting independence to the church as well as lists all the legal provisions for establishing and functioning of the new Ukrainian Orthodox Church.

Handing in the Tomos. It has not been decided yet who will be receiving the historic document and who will bring it to Kyiv. One of the versions suggests that the Tomos will be taken to the Church Council that will be called in Kyiv shortly after the signing of the document. Another version suggests that the Council will first start working, will choose the church head and it will be the latter to receive the charter of Patriarch Bartholomew.

The Tomos passed to Ukraine will complete the granting of autocephaly. This very likely scenario is going to change the map of the church world and will further isolate Russia. Should the process of forming of the new church in Ukraine go as foreseen in Kyiv and Constantinople, Europe will get the second biggest Orthodox Church after the Russian Orthodox one. Its loyalty will surely lie not with Moscow.