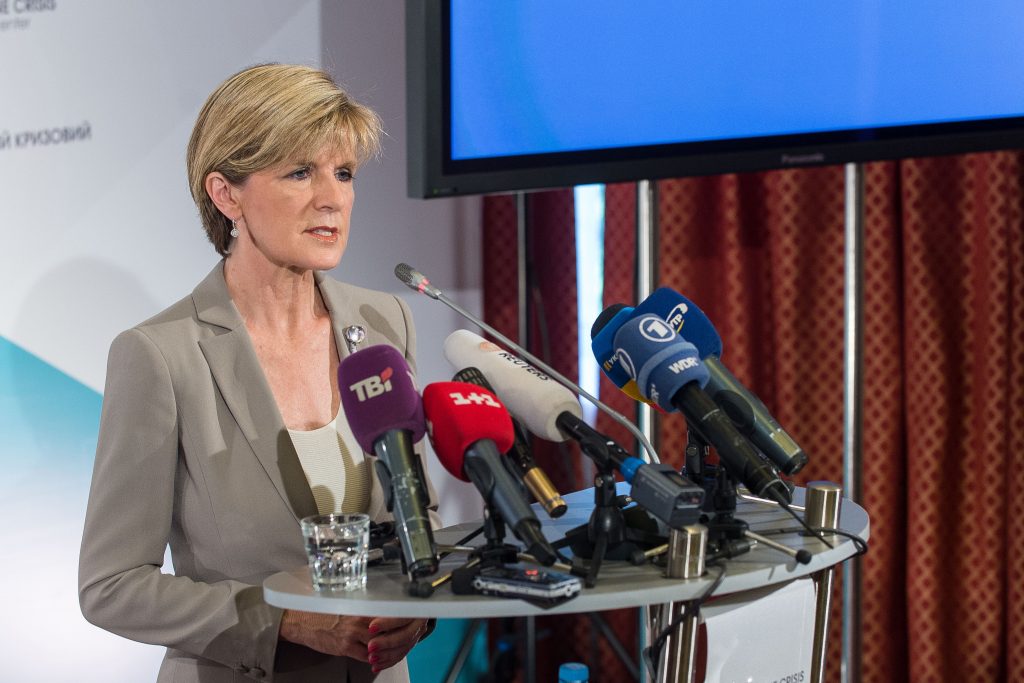 Kyiv, July 28, 2014. Today, the security situation in the Donetsk region of eastern Ukraine has temporarily improved, and an Australian humanitarian police mission to Ukraine is attempting to access the crash site of Malaysia Airlines Flight 17. This statement was released by the Australian Minister for Foreign Affairs Julie Bishop during her press briefing at Ukraine Crisis Media Center.

Australia has dispatched a team of federal police officers to Donetsk, Ukraine in order to secure the crash site and aid in the investigation of the tragedy. On July 27, the team of unarmed Australian and Dutch police officers delayed plans to visit the crash site after receiving the reports of fighting between the Ukrainian military and pro-Russian fighters in the vicinity of the site.

“We are here for one purpose, and this is to ensure that the site is secured, to enable us each day to scour it for remains for those aboard MH17, and to commence the crash site investigation,” Bishop explained. The Australian Foreign Minister stated the that at this stage, the mission’s goal is to access the site and begin to set up a humanitarian corridor so that investigators can access the area as quickly and safely as possible. “We don’t want to be here for a moment longer than we have to be. We want to get onto the site, do our work, and leave,” she said.

At the moment, Bishop stated, the crash site is still under the control of pro-Russian armed groups. On the road between Donetsk and the crash site, the joint Australian-Dutch mission must pass through both Ukrainian and anti-government checkpoints. The Australian government is seeking assurances from the Ukrainian government that any military action won’t compromise the humanitarian mission. “We understand that yesterday there was fighting within the exclusion zone,” and “we need a re-assurance that the exclusion zone will remain, and that there will be a cease fire so that we can carry out our work,” Bishop said. The Australian Foreign Ministry claims that it received re-assurances of a cease fire from the Ukrainian government last week, but conceded the difficulties of controlling the situation on the ground in an active war zone.

Lastly, Foreign Minister Bishop expressed hope of Russian cooperation in securing the MH17 crash site. The Australian government has been in close contact with Russian authorities, and “is hopeful that the Russians will use their influence over the separatists to ensure that we can have unimpeded access to the site,” Bishop said.