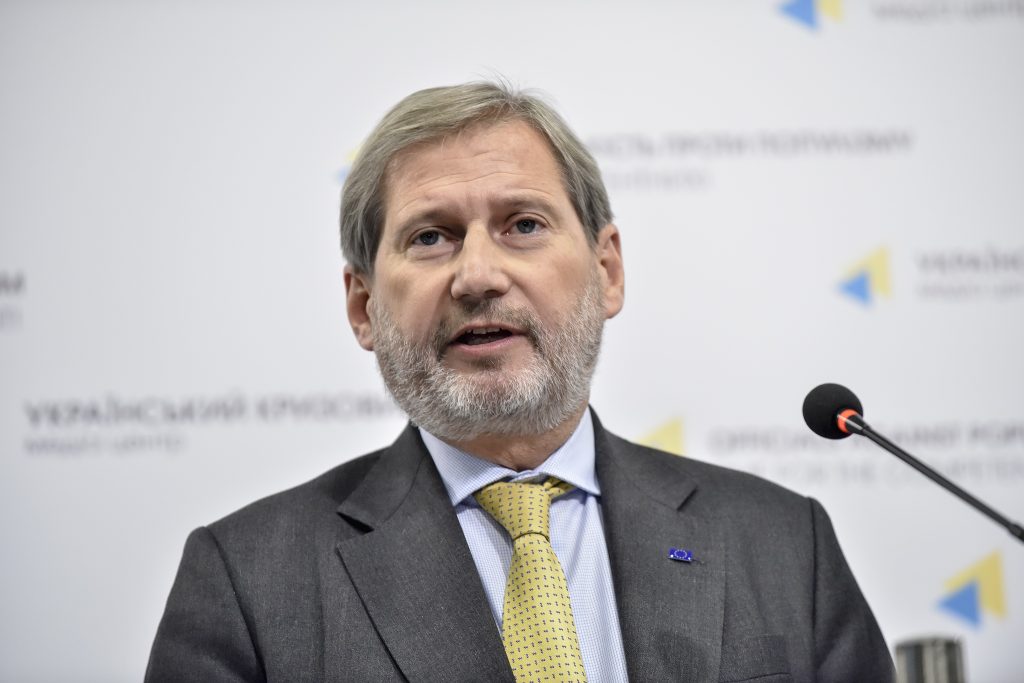 On November 9 Johannes Hahn, EU Commissioner for European Neighbourhood Policy and Enlargement Negotiations visited Ukraine. The principal aim of his visit was to discuss the progress in implementation of reforms and of the EU-Ukraine Association Agreement. To remind, the latter became a Euromaidan symbol five years ago as reluctance of the then-President Viktor Yanukovych to sign it caused the outbreak of the protests. Commissioner Hahn met Ukraine’s leadership as well as civil society representatives. During the meeting with the Prime Minister Volodymyr Groysman the EU official presented a new edition of the regular Association Implementation Report on Ukraine. The document assesses Ukraine’s progress achieved in implementation of the Association Agreement with the EU this year (previous report was released in November 2017). What is Hahn’s take on the reform progress and on the implementation of the Association Agreement? What is the EU position on the escalation in the Azov Sea? Read on UCMC’s overview.

The EU has released the Association Implementation Report on Ukraine. “The Ukrainian authorities are carrying out difficult but rewarding reforms in very challenging circumstances. The results of these reforms are bringing clear benefits to the Ukrainian people: overall trade between the EU and Ukraine has increased by 24% in 2017, opening new markets for Ukrainian businesses, while over half a million Ukrainian citizens have travelled to the EU under the visa free regime and over 7,200 academic exchanges have taken place under Erasmus+”, emphasized Federica Mogherini, European Union High Representative for Foreign Affairs and Security Policy and Vice-President of the European Commission.
In his turn, Johannes Hahn, EU Commissioner for European Neighbourhood Policy and Enlargement Negotiations, noted that in the past year Ukraine had advanced in implementing a series of important and complex reforms including healthcare, pension, decentralization, governance, public procurement and environmental reforms.

The EU report notes a slowdown in reforming judiciary and establishing anticorruption system, the document also emphasizes the need to intensify the pace of the above reforms.

“It’s essential to quickly establish the High Anti-Corruption Court so that NABU (National Anti-Corruption Bureau of Ukraine – UCMC) cases can be dealt with swiftly, fairly and effectively. Corrupt officials must be punished. This is what people and the international community expect,” EU Commissioner Hahn said at a press-briefing at Ukraine Crisis Media Center.

Johannes Hahn also recognized “NABU’s excellent work and results it managed to deliver despite well-known strong pressure against it.”

The high-level EU official also named important re-establishing credibility to the already existing anticorruption agencies in Ukraine. “I’m very concerned about the loss of credibility of the Specialized Anti-Corruption Prosecutor who was found to have seriously violated the rules (…). I would urge Ukrainian authorities to take the necessary measures to re-establish that credibility,” Commissioner Hahn said.

Johannes Hahn reassured that security situation in the Azov Sea is an important issue on the agenda of the European Union. “The situation around the Sea of Azov is high on our agenda, including discussions of EU Foreign Ministers in 10 days in Brussels at the next Foreign Affairs Council,” the official said.

Responding to the question by media the EU Commissioner emphasized that the European Union will not recognize the so-called “elections” that Russia-backed militants are planning to hold in the areas of Luhansk and Donetsk regions under their control on November 11. “We are very much committed to the Minsk process (…). In this respect, this (referring to the so-called ‘elections’ – UCMC) is not a contribution to resolve the problem. On our side we will certainly not acknowledge and not recognize these ‘elections’,” Johannes Hahn said.

The murder of Kateryna Handziuk and attacks on activists

The international community will closely follow the investigation course of the murder of Kateryna Handziuk as well as of other attacks on civil society activists, EU Commissioner Hahn stated. He also expressed condolences to the family and friends of Kateryna Handziuk. “This is something that we won’t be accepting. We will do everything we can do to contribute to not only clear up a particular crime, but to protect the engaged citizens in the future,” the EU official said.

He also added that will suggest to the Ukrainian authorities to set up a taskforce in law enforcement to investigate such cases. “I will propose to the authorities for the future to set up a taskforce at the SBU for instance to deal with such cases on the national level in order to guarantee the highest professionalism, integrity, transparency and also the opportunity for the international community to follow up on these cases,” EU Commissioner Hahn elaborated.