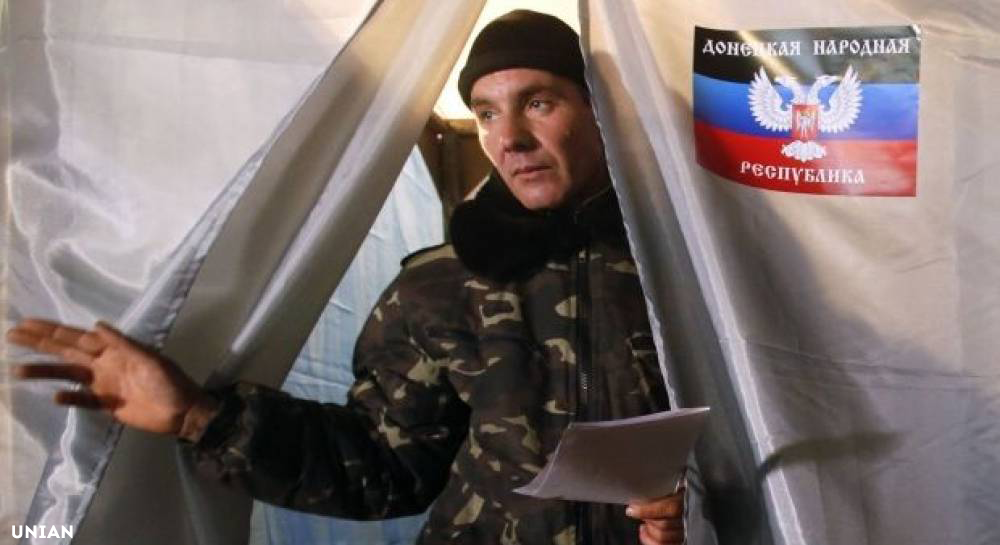 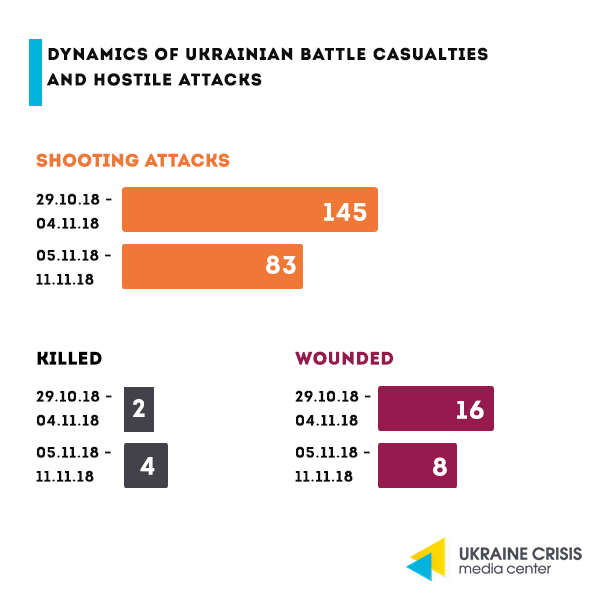 Last week Russia-backed militants were conducting precision fire from grenade launchers, heavy machine guns and small arms. Militants were also firing from 120-mm mortars upon the Joint Forces positions near Pavlopil. It is exactly outside this town in the Mariupol direction where Russian proxies made most intense attacks. The adversary is not seeking direct combat engagements but at the same time is in try to maintain instability at the contact line.

On November 11, the so-called “elections” of the leaders of illegal “republics” in the occupied part of Donetsk and Luhansk regions were held. Ukrainian authorities called on the people to refrain from voting and are hoping for the sanctions against Russia to be introduced. The US and the EU do not recognize these “elections” either as they contradict the Minsk agreements on the settlement of the situation in Donbas. 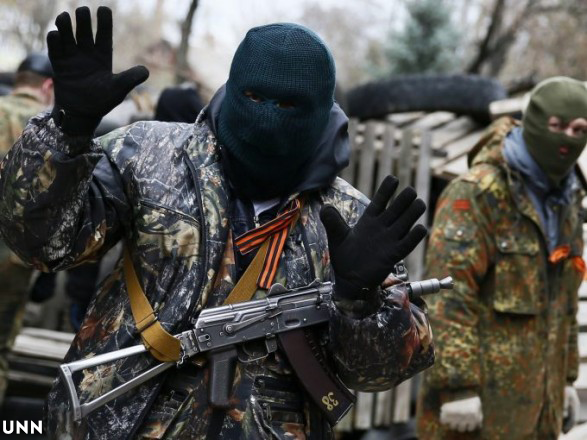 Casting the “votes”. “Voting” at the “elections” came to a close. The de-facto authorities said “voter turnout” in the “LPR” amounted to 77 per cent, in the “DPR” – 80,1 per cent. Acting “DPR” head Denis Pushylin became the leader in Donetsk. He took the post soon after the death of the previous leader Aleksandr Zakharchenko. Pushylin scored 60,9 per cent after 97,52 per cent of the “ballots” were counted, the so-called “election commission” reported. In Luhansk Leonid Pasechnik was said to be chosen leader, he is said to have scored 68,4 per cent after 96 per cent of “ballots” were counted. Pasechnik became “LPR” head a year ago when Igor Plotnitskyi “resigned” and left the quasi “republic”.

Why people came to the “polling stations”? Media under control of the Russia-backed militants published photos that capture the “polling stations” full of people. The number of the polling stations compared to the situation before the war decreased three times, explains Vitaliy Sizov, analyst at the Donetsk Institute of Information in a vlog for “Novosti Donbasa” (Donbas News). At the same time the population number in the uncontrolled territories shrunk twice.

Where does the need for “elections” come from? “We are witnessing the leading elites changing, the process was kick-started in Luhansk by means of the ‘military putsch’, in Donetsk – by the explosion (that claimed the life of the then-leader of the ‘DPR’ Aleksandr Zakharchenko – edit.),” says analyst of the Donetsk Institute of Information Vitaliy Sizov. “The ‘elections’ are taking place under the tricolor, as if to say ‘we are heading to Russia’. On the one hand, it is a technology to make the people go and vote, an attempt to vote for some kind of normal life, not in Russia but at least in some status of a recognized state,” Sizov continues.

Reaction of Ukraine’s President. The President of Ukraine Petro Poroshenko stated that Ukraine’s international partner states do not recognize the “elections” in the uncontrolled parts of Donetsk and Luhansk regions that took place last Sunday. “The majority of our partners – including the United States, Canada, member states of the European Union, from the UK to Germany, from France to Spain, from Latvia, Estonia, Lithuania, Sweden and Romania (do not recognize the so-called ‘elections’ – edit.). Our partners from Poland made a harsh statement calling for a new round of sanctions. This reaction clearly states that on the one hand these ‘elections’ will be recognized by no one, they are blatantly violating the Minsk agreements. On the other hand it is a call on the Russian Federation – the organizer of these ‘elections’ to assume the responsibility,” President Poroshenko told journalists in Paris last Sunday.

Commentary of Ukraine’s Foreign Affairs Ministry. Ukraine’s Foreign Affairs Minister Pavlo Klimkin emphasized that reinforcement of international sanctions awaits Russia as a consequence of the fake elections it organized in the occupied parts of Donetsk and Luhansk regions. “The Kremlin is staging yet another circus performance to hide its crimes. The reaction to these criminal actions of Kremlin’s authoritarian regime and of its proxies in the occupied areas that will follow is reinforcement of international sanctions. We are working on it with our international partners!” Minister Klimkin wrote on Facebook last Saturday. In his video address posted alongside the above text, the Foreign Affairs Minister stated that organizing fake elections is “a crime against those who are suffering in the occupied area, a crime against Ukraine, a crime against the international law as well as a crime serving as a cover-up for all other crimes that Russia made.”

Position of NATO. NATO is not going to recognize the so-called “elections” that are being held in the illegal “republics” in Donetsk and Luhansk regions on November 11, NATO spokesperson said in a statement released on the Alliance’s web site last Sunday. The “elections” “run contrary to the letter and spirit of the Minsk Agreements and undermine efforts towards a peaceful resolution of the conflict,” the statement says.

Position of the US. “The so-called ‘People’s Republics’ have no place in the Minsk agreements and are illegitimate tools supported by Russia’s military might and created by Russia to administer Ukrainian territory it controls by force,” the US Special Representative for Ukraine Negotiations Kurt Volker wrote on Twitter on November 11. “Instead of implementing Minsk and moving towards #peace4Ukraine, Russia is subsidizing corrupt leaders of Donbas, training and equipping the illegal armed formations, institutionalizing the status quo through sham ‘elections,’ and blocking diplomatic progress,” Volker twitted.

Position of the EU.High Representative of the European Union for Foreign Affairs and Security Policy Federica Mogherini made a statement saying that the European Union does not recognizes the “elections” of November 11 and their legality in the defined regions of Donetsk and Luhansk regions.

Did the Ukrainian authorities do anything for these “elections” not to happen? Heads of Ukraine’s Security Service and of the National Security and Defense Council Vasyl Hrytsak and Oleksandr Turchynov respectively stated that the organizers of the “elections” will be held criminally liable. Deputy Minister for the affairs of the occupied territories Heorhiy Tuka said that those individuals registered in the government-controlled area as internally displaced who would come to cast the “votes” we be held liable as well. In the opinion of analyst Sizov this position may work against Ukraine: “Demanding a heroic civic action from the people is too daring, I think, besides, it also plays to the consolidation of the ‘DPR’ as an independent unit,” Sizov told Hromadske TV. 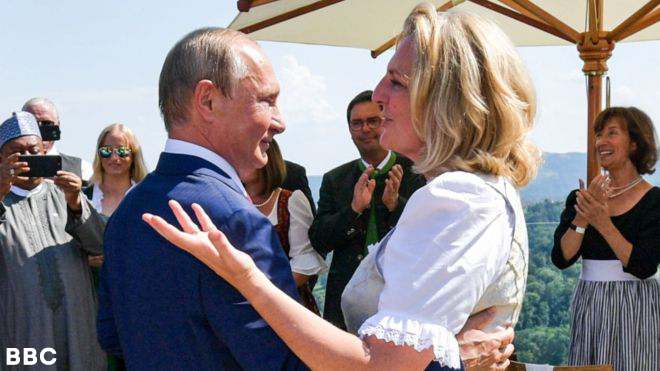 A retired colonel of the Austrian armed forces was arrested on charges of espionage for Russia. He might have earned 300 thousand euro for sharing the secret information. The 70-year old colonel is suspected in working for foreign intelligence for 20 years, Austrian media Kronen Zeitung reports quoting a representative of the Austrian defense ministry. The newspaper notes that the suspect acted very professionally. While already retired he was also serving on an “invisible post” with the Austrian army. According to Die Presse the suspect was recruited back in 1998.

Following the developments Austria’s Foreign Affairs Minister Karin Kneissl cancelled her upcoming trip to Russia. Mario Kunasek, Austria’s Defense Minister, said that the investigation detectives are holding checks on the computers and other technical equipment of the ex-colonel. The Minister also said that it is not to be ruled out that the former officer could have been passing the secret information. Austria’s Defense Minister said Russia was interested in the weapons systems, migration situation in the country and in the data concerning defined persons.

To remind, Austria is one of a few European member states pursuing friendly relations with Russia. President Vladimir Putin even attended the wedding of the Austrian Foreign Affairs Minister Karin Kneissl and danced with her. Austria’s governmental coalition is formed with the far-right Freedom Party sympathetic to the Russian authorities.

Last week “The Wild Fields” film premiered in Ukrainian cinemas. The film is based on Serhiy Zhadan’s “Voroshilovgrad” novel recognized by BBC as the Book of the Decade in 2014. “The Wild Fields” is co-produced by Ukraine, Germany and Switzerland. It is a debut feature film of Ukrainian film director Yaroslav Lodyhin. The Ukrainian premiere was long-awaited by the audience. The protagonist of the film referred to as an action movie or “eastern”, Herman, is back in his native town in Donbas. His elder brother has left and the need to protect the family business – an old petrol station, from those who keep seizing the land plot by plot, becomes a mission he is to take care of. The film was largely shot in the town of Starobilsk, Luhansk region, and Zhadan’s native one. Acclaimed Ukrainian dramaturge Natalia Vorozhbyt chaired the script-writing team, which Serhiy Zhadan was also part of. The writer also starred in a brief film episode. One of the first international film reviews reads: “The events at the old petrol station become a model of the crazy life and social relationships in Ukraine, a witty allegory of the time when hints of the imminent Donbas war are in the air.” “The Wild Fields” will have its international premiere at the A-class Tallinn Black Nights Film Festival (PÖFF) in late November. The film contends for the award in the First Feature Competition section. It will go on screen in Tallinn on November 28 and December 1 and will screen in Tartu on November 29. Check out the screening details at PÖFF and the film trailer.

Ukrainian boxer Oleksandr Usyk, the world’s absolute cruiserweight champion, successfully defended the champion’s title. In a tournament held at the Manchester Arena stadium Usyk claimed a knockout win over UK boxer Tony Bellew in the eighth round. It is the first time that a Ukrainian boxer defends his WBC, WBO, WBA and IBF titles as well as the title of The Ring magazine.