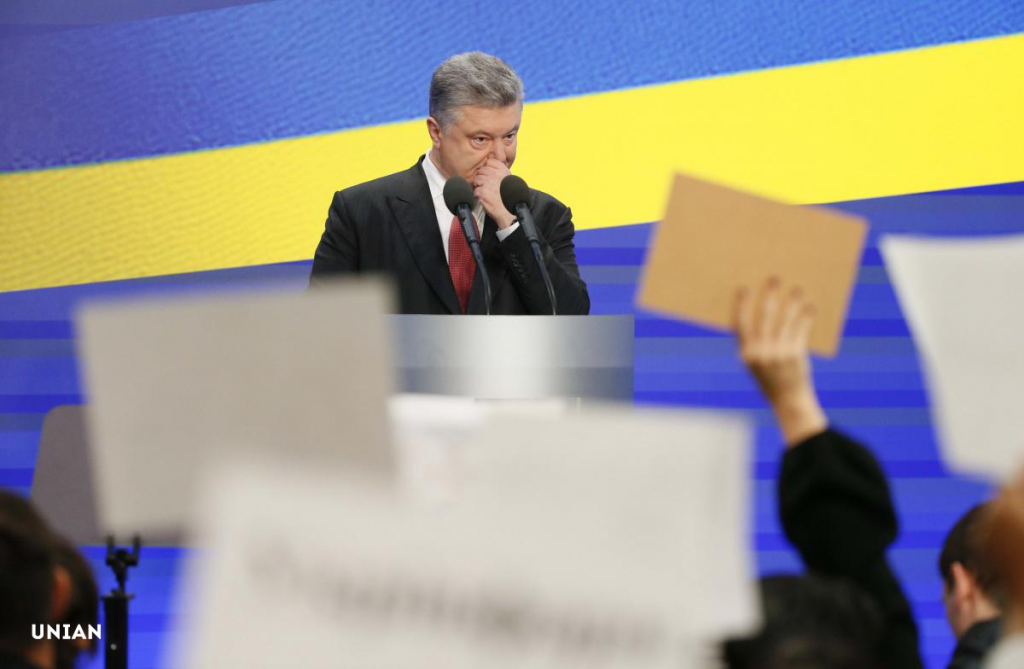 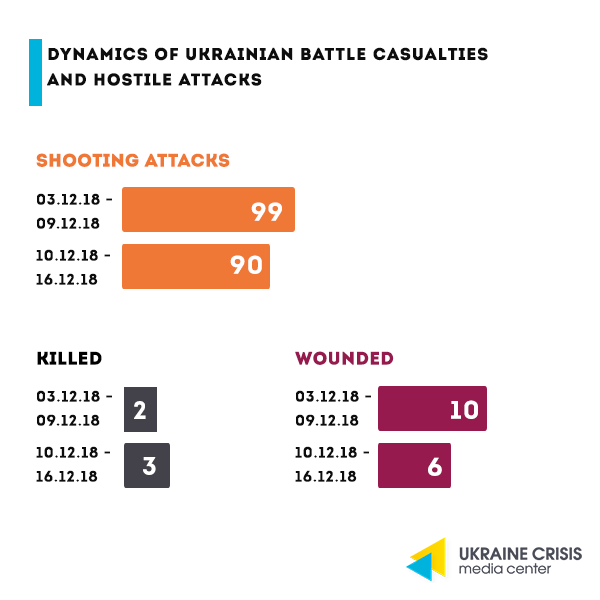 Russia-backed militants fired from the weapons mounted on infantry fighting vehicles, grenade launchers, heavy machine guns and small arms upon the positions of Ukraine’s Joint Forces outside Krymske in Luhansk sector and in proximity to Novhorodske near Horlivka. They also fired upon Maryinka, Krasnohorivka, Avdiivka and Nevelske in Donetsk sector as well as upon the Ukrainian troops’ positions outside Shyrokyne and Vodyane in Mariupol area.

Russian proxies also fired from the weapons mounted on infantry fighting vehicles BMP-2, an antiaircraft mount ZU-23-2, grenade launchers, heavy machine guns and small arms upon the Joint Forces’ positions near Maryinka, Pisky, Starohnativka and Pervomayske in Donetsk sector as well as outside Chermalyk, Hnutove and Vodyane in Mariupol area.

President Poroshenko gives a press-conference: what did he say? 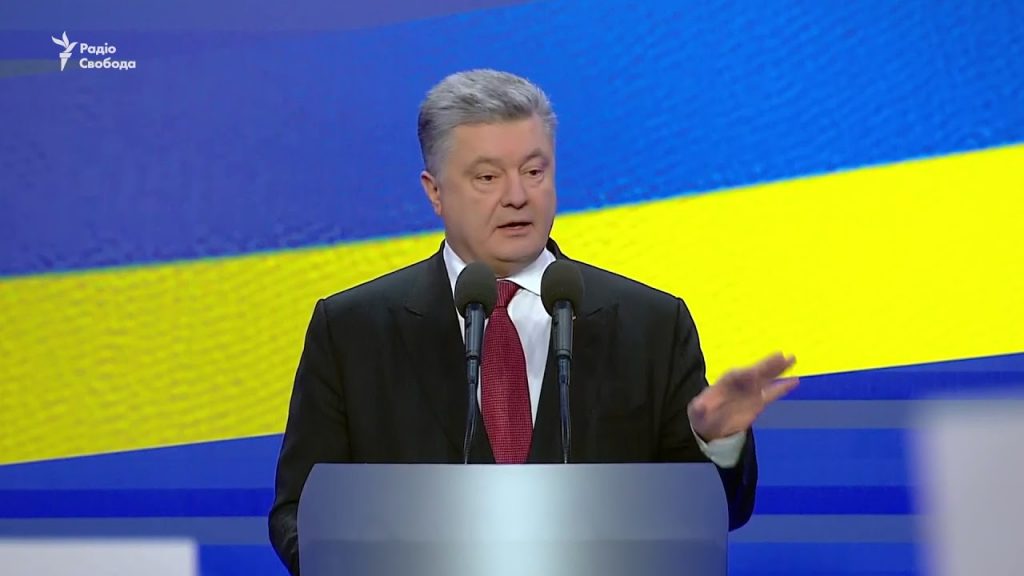 President Petro Poroshenko held a press-conference at Mystetskyi Arsenal in Kyiv on December 16. A day before the head of the state took part in the Church Unification Council where the leader of the new unified Orthodox Church in Ukraine was elected. Last time Poroshenko was meeting journalists in early 2018. This time the President was taking questions about the church, martial law, the upcoming elections, attacks on activists and Ukraine’s political prisoners in Russia and in occupied Crimea.

Tomos and the unified church. Ukrainian President emphasized that the Ecumenical Patriarchate had already recognized the new Ukrainian Church. Poroshenko also reminded that Ukraine’s struggle for the autocephalous Orthodox Church lasted for 100 years. He said establishing of the unified church in Ukraine is a move towards de-colonization and de-occupation. Ukraine’s single Orthodox Church will not have the state status and will be an equal alongside other religious institutions and organizations.

On Medvedchuk, Putin and the prospects of liberation for Kremlin’s prisoners. The liberation of Ukrainian political prisoners in Russia and in occupied Crimea depends solely on Putin. Medvedchuk has not been taking part in the work of the Trilateral Contact Group since spring but he is actually Putin’s representative, that’s why Poroshenko is meeting him to move the liberation of Kremlin’s hostages forward.

On the murder of Kateryna Gandzyuk. “I share the concern. I will not let spoil the country’s image – because the attacks on activists are not duly investigated. All investigative agencies are working on it.”

On martial law. “If Russia does not make a large-scale intervention, martial law will not be prolonged and so the election campaign will start. But the threat of the Russian aggression in Ukraine stands.”

On the court ruling illegal Nasirov’s dismissal from the post of the Fiscal Service head.The government did not restore Nasirov in office and is not going to. Moreover the judge who issued the decision “is not a representative of the reformed court.” Poroshenko will further check on it.

On campaigning and ranking.The election campaign has not yet started. It is not the proper time and place to announce the participation in the campaign. If a more “trustworthy” candidate is chosen, I will be helping them, President Poroshenko said.

Moscow Patriarchate reacts to establishing of the unified Ukrainian Church 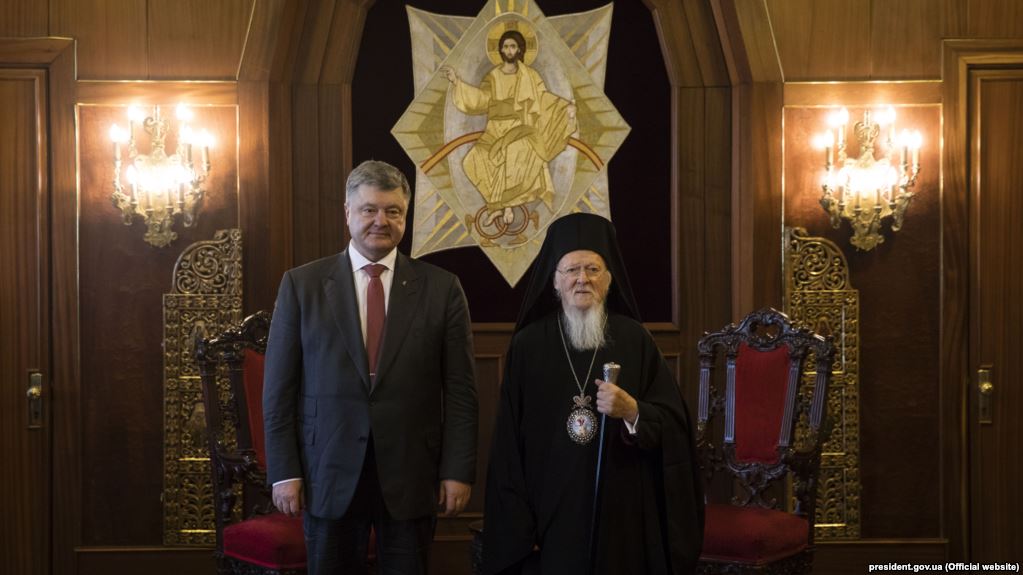 Moscow fires back. The head of the Russian Orthodox Church Kirill addressed religious and state leaders as well as leaders of international organizations claiming that the Ukrainian authorities have been exercising “pressure” on the Moscow Patriarchate Orthodox Church in Ukraine while the Ukrainian state kept “interfering” into the church life in the country. According to the external church relations department of the Russian Orthodox Church, the Moscow Patriarch sent the address to the heads of the national churches, to Pope Francis, to the head of the worldwide Anglican Communion Archbishop of Canterbury Justin Welby and to the general secretary of the World Council of ChurchesOlav Fykse Tveit. Kirill’s also appealed to the UN Secretary General António Guterres, to the OSCE Secretary General Thomas Greminger, as well as to the leaders of the Normandy Four member states – to the French President Emmanueal Macron and the German Chancellor Angela Merkel. Patriarch Kirill said the rights and freedoms of the hierarchs, clergy and believers of the Moscow Patriarchate Orthodox Church in Ukraine are being violated.

Extraordinary church council in Kyiv. On December 17 the Ukrainian Orthodox Church of the Moscow Patriarchate held an extraordinary sitting of the church council (synod) at the Kyiv-Pechersk Lavra. The sitting was chaired by Metropolitan Onufriy.

“The Ecumenical Patriarch sent a letter to Metropolitan Onufriy clearly stating that after the Unification Council and the election of the unified church leader – the Metropolitan of Kyiv, the latter automatically becomes the canonic Kyiv Metropolitan,” Metropolitan Epiphanius said.

Economy: martial law and cooperation with the IMF

Martial law introduced in Ukraine as a response to the Russian military aggression in the Kerch Strait, had no impact on the budget revenue, said Deputy Finance Minister Serhiy Verlanov. “The first statistical data that we are getting is demonstrating that the introduction of the martial law has not had an impact on the state budget revenue, for what it takes the revenue part of taxes and excise taxes we’re moving according to the plan,” the official said.

He added that martial law does not bring any risks for the state finance and should not affect the budget performance in 2018.

IMF. Ukraine’s National Bank expects a positive decision of the board of directors of the International Monetary Fund on disbursing the assistance to Ukraine and is waiting for the next tranche to come on December 25, 2018, said National Bank head Yakiv Smoliy at a press-briefing. “The IMF board of directors’ meeting is scheduled for December 18, the Ukrainian issue is part of the agenda. We are expecting a positive decision to be issued for the stand-by program instead of the EFF program currently in force. We expect the next tranche to come after the decision is made and no later than December 25,” he said. Answering the journalist’s question the head of Ukraine’s National Bank added that as per the National Bank’s estimate the first tranche will amount to USD 1,4-1,9 billion. The final amount will become known after the board of directors meets. On December 5 Ukraine’s Cabinet of Ministers approved the draft memorandum of cooperation between Ukraine and the International Monetary Fund.