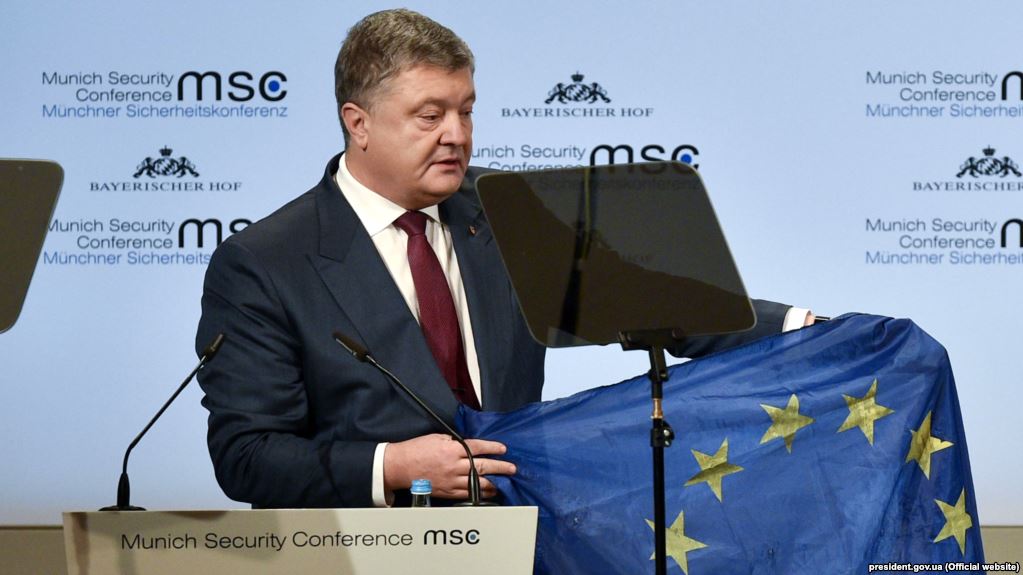 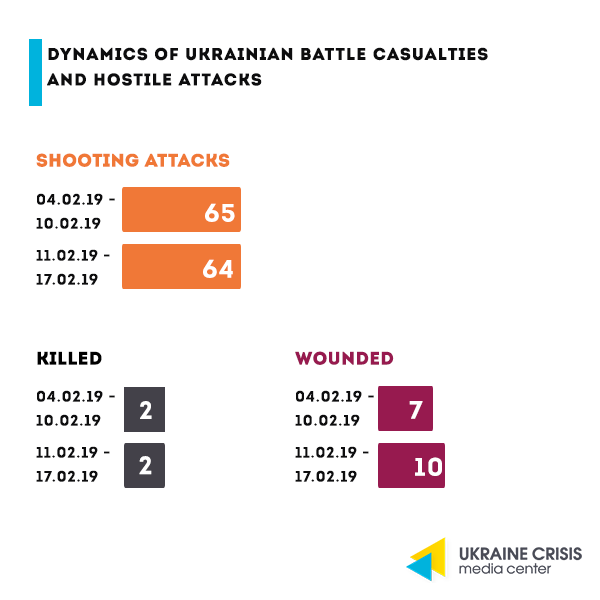 Russia-backed militants keep violating the ceasefire using the Minsk-proscribed weapons. On February 14 in the area of responsibility of the operational-tactic group “Pivnich” (North) Ukraine’s Joint Forces recorded a hostile attack upon the town of Novoluhanske, made with the use of 152-mm precision-guided artillery shells “Krasnopol”. A residential house was destroyed in the incident. The Ukrainian side at the Joint Control and Coordination Center has confirmed the fact of the attack and of house destruction as well as that the shrapnel is of the precision-guided munition.

Ukraine at the Munich Security Conference 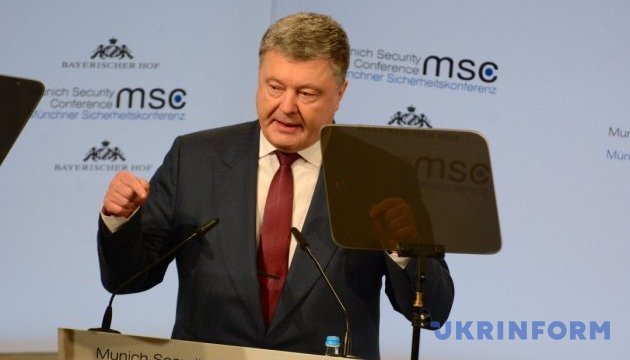 The security conference that Munich hosts for the 55thyear in a row, is one of the world’s most reputable international fora. This year the event has even excelled itself. The Bavarian capital saw 35 heads of states coming, alongside five dozens of defense ministers and foreign affairs chiefs and the biggest in the forum’s history U.S. delegation.

The “Azov package” of sanctions? Already after the first round of meetings at the Munich Security Conference President Poroshenko claimed a diplomatic victory. “We have coordinated our efforts pertinent to the sanctions today. The so-called ‘Azov package’ of sanctions was discussed and approved. It is exactly what I promised you last December,” the President told journalists in the evening on Friday. The web site of the President added that Brussels is to formally adopt the sanctions early this week.

The EU: personal sanctions against Russia’s Federal Security Service and infrastructural support to Ukraine. In contrast to Poroshenko’s statements, the EU lacks unanimity to increase the pressure on Russia. In December 2018 ahead of the EU summit Ukraine indeed was asking the European Union to introduce the “Azov package” of sanctions against Russia. Ukrainian suggestions included the ban on Russian ships to enter the ports of EU member states. Back then the EU preserved but did not step up the existing sanctions against Russia.

Instead the EU has introduced new personal sanctions today (the restrictive measures not targeting the Russian state but particular individuals). On February 18 EU’s Foreign Affairs Council expanded the sanctions list by adding eight Russian border guards and members of the Federal Security Service (FSB) involved in the attack on Ukrainian ships. The move foresees entry ban and asset freeze. It is rather a symbolic decision as most probably the FSB staff has no accounts in foreign banks and it’s quite unlikely they were recently travelling to the “hostile” EU.

The decision to support Ukraine’s infrastructural projects was also made at the summit. On February 18 the EU Foreign Affairs Ministers are supposed to start the procedure to get the assistance projects approved. The projects in focus include transportation – for example, a loan or a grant to construct the Zaporizhzhia-Mariupol road that is expected to make the access to the near-front city easier; as well as water supply projects that are of utmost importance to Donbas.

The U.S.: the possibility of new sanctions against Russia. In contrast to its European counterparts, the U.S. is much more determined to introduce new sanctions against the Russian Federation. At the meeting with President Poroshenko the Senate representatives promised to lobby the sanctions responding to the Azov crisis. Thus, a new U.S. bill that the Congress is to consider directly mentions the attack on Ukrainian ships as the reason for a new round of sanctions against Russia. The draft law also suggests introducing restrictions on Russia’s ship construction and adding more restrictions on oil extraction and energy sectors.

Ukraine’s most successful reformer is back in office: five corrupt schemes that Ulana Suprun ruined 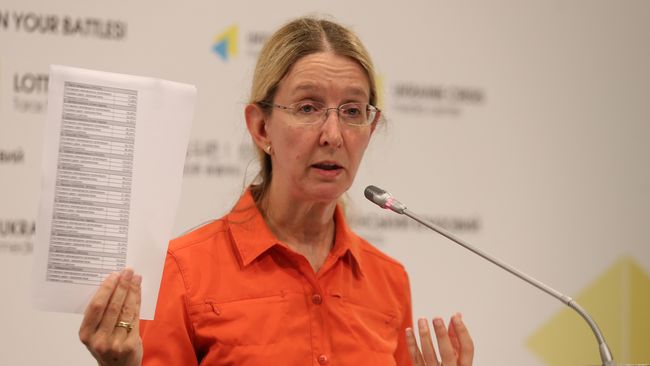 On February 5 the Kyiv district-level administrative court having considered the claim by Ihor Mosiychuk, MP of the Radical Party, issued the decision to temporarily suspend Ulana Suprun from serving as the acting Healthcare Minister. The reasons named for the decision were Suprun’s alleged incompetence and her U.S. citizenship. The news was actively discussed and caused indignation with the Ukrainian society. On February 13 the Ukraine’s Cabinet of Ministers issued an order empowering Ulana Suprun to perform the ministerial duties. Next day the Kyiv district-level administrative court reinstated her in office. Ukrainian magazine “Novoe Vremya” published an article casting light on the corrupt schemes that the acting Healthcare Minister had destroyed and on who might be bothered by that. UCMC quotes the article’s highlights.

U.S. born and raised Suprun came to her ancestor’s native land becoming a reformist and the flagship for changes. The changes she started are of large scale and aim at reinventing the entire system.

Suprun has been in the status of the acting Minister since summer 2016, as there are not enough votes in the Parliament to appoint her a full-fledged Minister. Since her first days in office the opponents – some well-known medics and some MPs have been fighting against her. Thus, the parliamentary healthcare committee chaired by Olha Bohomolets of the Petro Poroshenko Bloc, has established itself as one of Suprun’s primary foes, twice trying to dismiss her.

Public procurement: 40 per cent of the budget saved. In 2015 Ukraine switched to public procurement of medicine through international organizations. According to the Accounting Chamber of Ukraine, as a result 40 per cent of this specific budget part is saved annually. In 2018 UAH 5,9 billion (approx. USD 217 million) was spent on medicine procurement, UAH 2,36 billion (approx. USD 86,8 million) was saved respectively. The decision on international intermediaries needs to be extended each year at the governmental level. The Healthcare Ministry headed by Suprun has been doing it. The agency is now using the services of three big international organizations: Crown Agents, United Nations Development Programme and UNICEF. Previously the state was purchasing medicine in public tendering. Those tenders were often won by the companies owned by key players of the pharmaceutical industry.

Reanimation of hearts. Three years ago the Healthcare Ministry started reforming the treatment of cardiovascular diseases. The Suprun-led agency has increased the procurement of stents used to widen the vessels in case of emergency surgery in the event of the heart attack. As a result more people can be saved and the procurement price dropped from UAH 2,5-9,8 thousand (USD 92-360) to UAH 2-3,4 thousand (USD 73,6-125).

The Ministry has also changed their distribution system. Previously the agency was supplying the stents to regional healthcare directorates that then provided it for free to the patients in emergency cases. The number of stents depended on the population number in the region. The Healthcare Ministry is now sending stents to hospitals based on the number of surgeries they’ve made. “Previously part of the stents was kept to be passed to whom they wished to. There were no distribution criteria. The process was out of control,” Deputy Healthcare Minister Oleksandr Linchevskyi earlier explained to “Insider” media.

Overcoming insulin dependency. In 2017 the single e-registry of insulin-dependent patients became operational at the initiative of Ulana Suprun’s team. All patients with diabetes that regularly need insulin injections were put on an e-database visible to the doctor and pharmacy staff only. The doctor gives an e-prescription to get the medicine, the pharmacy staff checks the registry to give the medicine to the patient for free or with a discount. In Ukraine 220 thousand patients were getting insulin on paper. After the registry started operating all of a sudden the number decreased to 174 thousand persons, Linchevskyi said. The 46-thousand difference in the number of patients was being paid by the state and local budgets, the deputy minister elaborated. “There used to be various schemes allowing the healthcare departments at the city and regional administrations to earn (illegally),” Linchevskyi explained.

Access to information about the medicine in hospitals. Since 2016Suprun’s team made it mandatory for each hospital to release the list of available medicine so that the information is visible to their patients, this information should be updated weekly. Available medicine purchased at the public cost can now be also checked on the web site eliky.in.ua. According to acting Minister Suprun the hospitals were hiding from patients the medicine they were buying with public funds often reselling it to pharmacies located inside these hospitals. 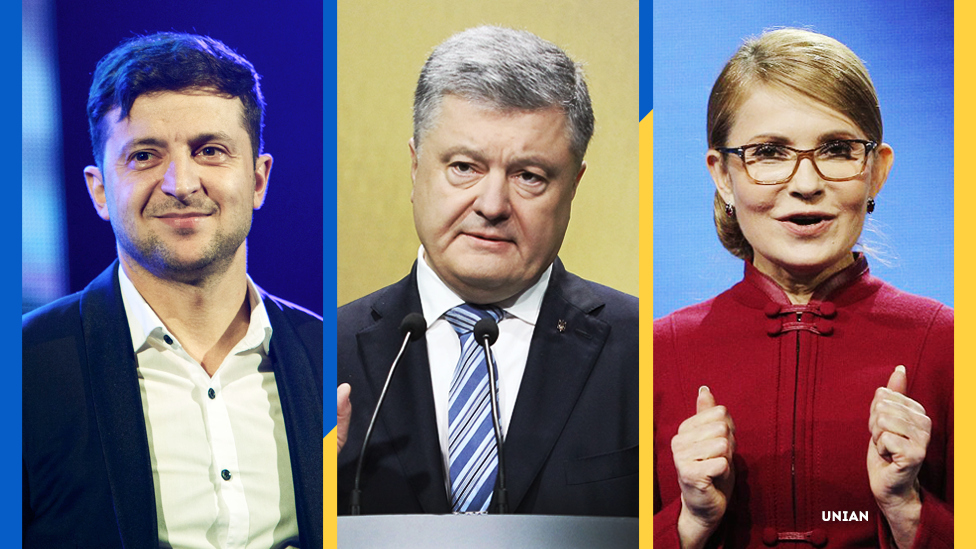 According to the Kyiv International Institute of Sociology (KMIS), 26,9 per cent of Ukrainians who are going to vote at the Presidential elections, are going to support showman Volodymyr Zelenskyi. KMIS held the opinion poll between January 31 and February 10, released the results on February 14. The ranking sees the actual President Petro Poroshenko follow Zelenskyi with 17,7 per cent, the third place is with the Batkivshyna party leader Yulia Tymoshenko – 15,8 per cent.