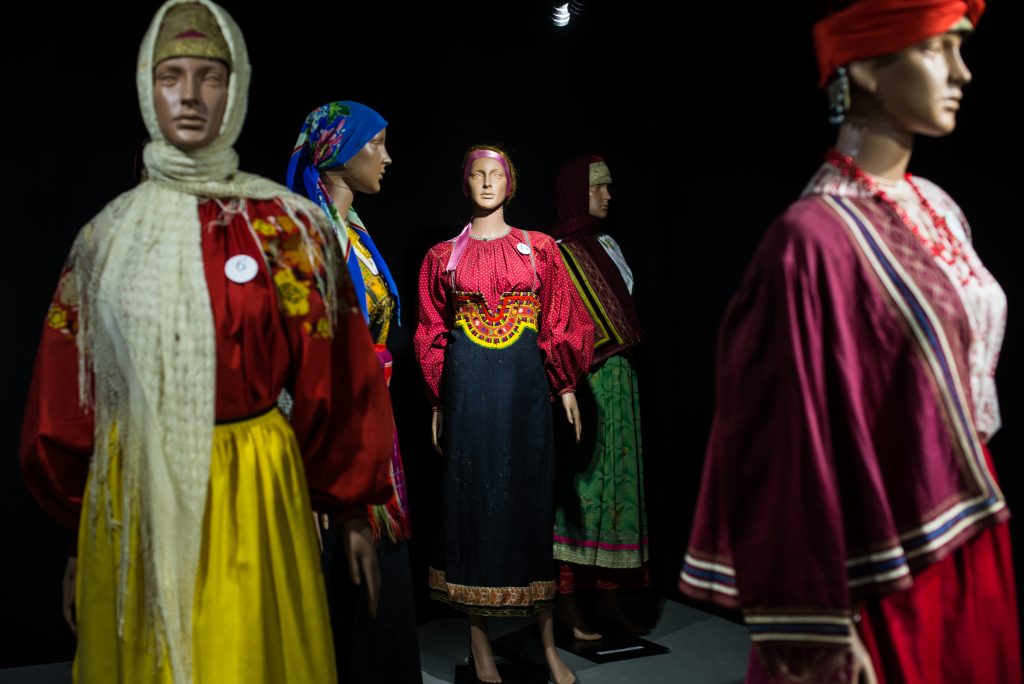 Between February 14 and 20 seven local history museums of Luhansk and Donetsk regions hosted presentations of mini-projects – winners of the project call for museums of Donetsk and Luhansk regions held in the framework of the project “Under construction: Museum open III” organized by the Arts Department of Ukraine Crisis Media Center with the support of the United States Agency for International Development (USAID).

The competition of mini-projects for the museums of Donetsk and Luhansk regions was held between November 22 and February 20.The goal of the competition was to unite and strengthen the communities to which these museums belong; to promote local historical and cultural peculiarities both within and outside of the communities; to empower the museums, to engage them in the production of new content that will reflect unique local history.A total of 13 museums in Donetsk region and six museums in Luhansk region took part in the competition. Six winners implemented their projects with the financial support of UAH 100 thousand (approx. USD 3,700) maximum disbursed for each project. The project by the Druzhkivka history and fine arts museum was chosen an additional winner and was granted partial financing. 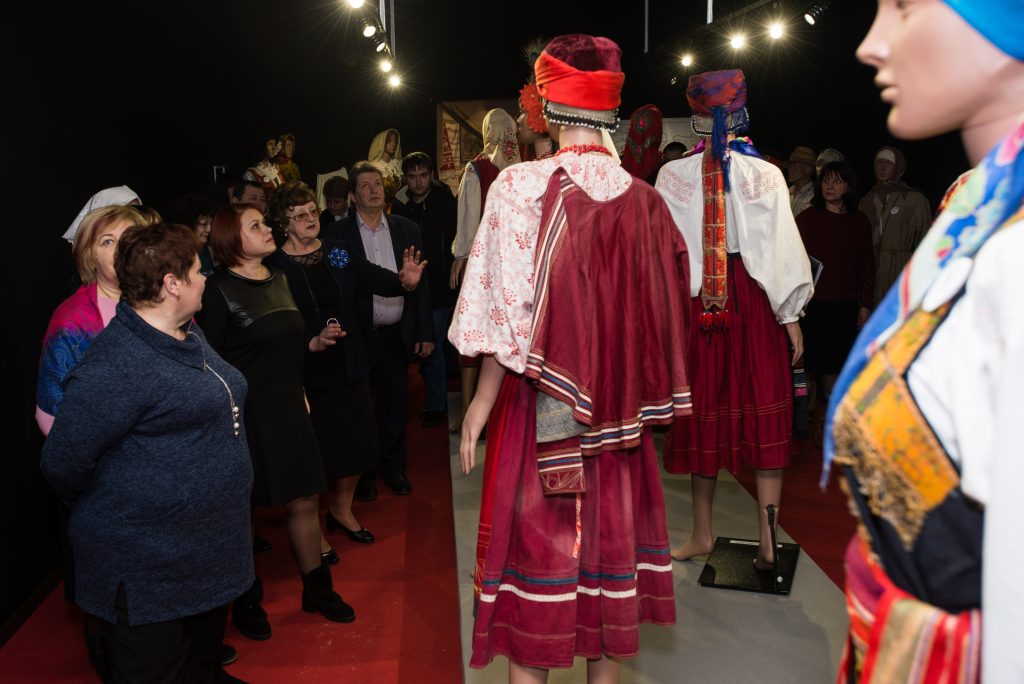 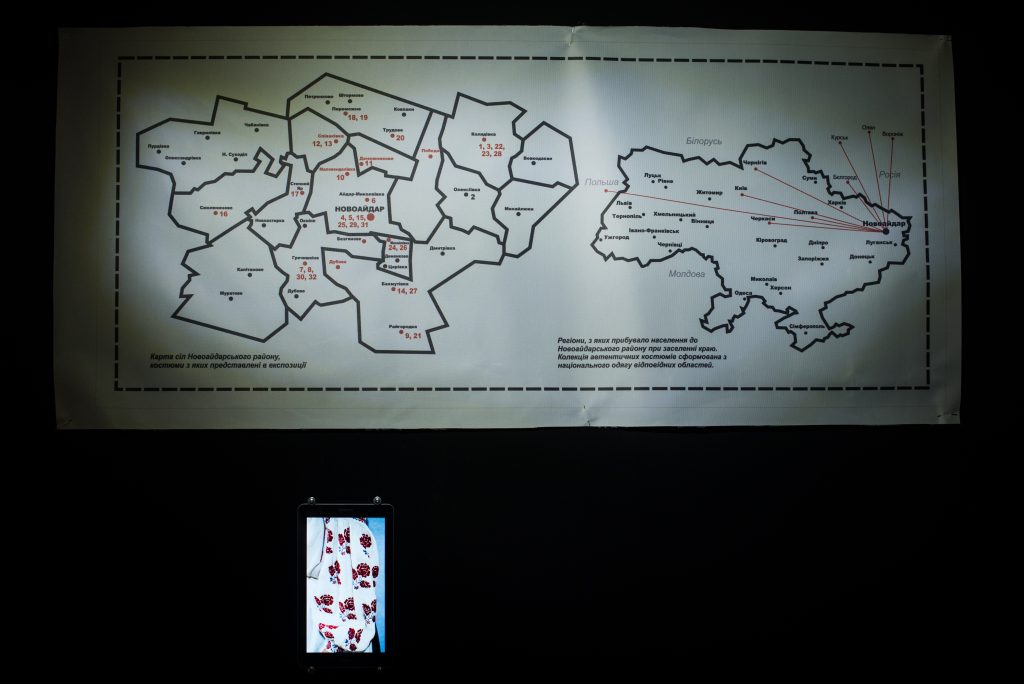 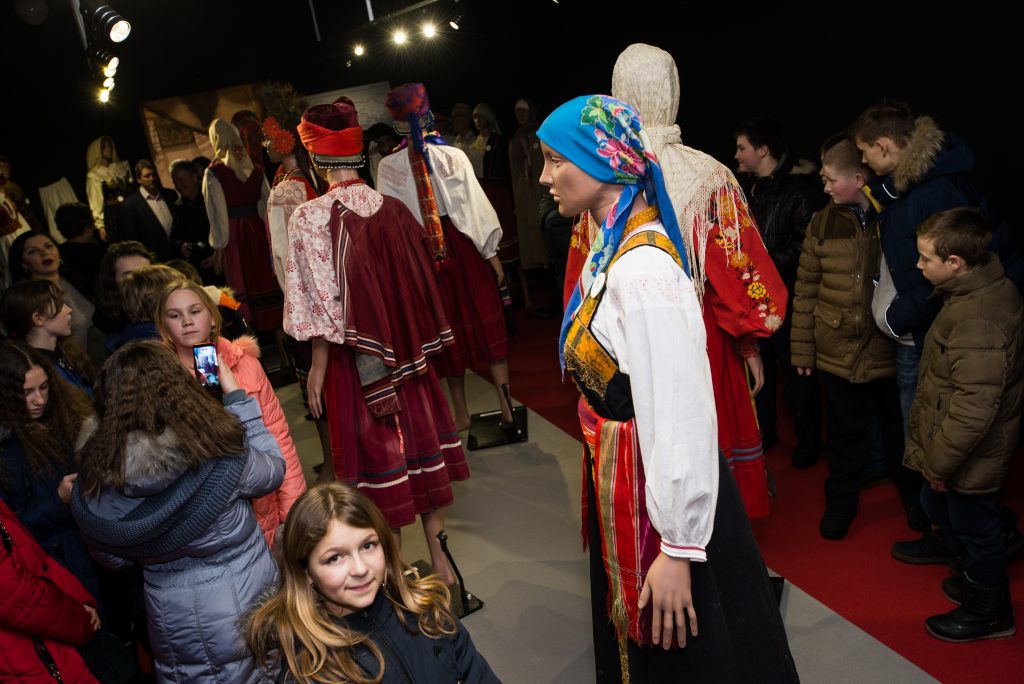 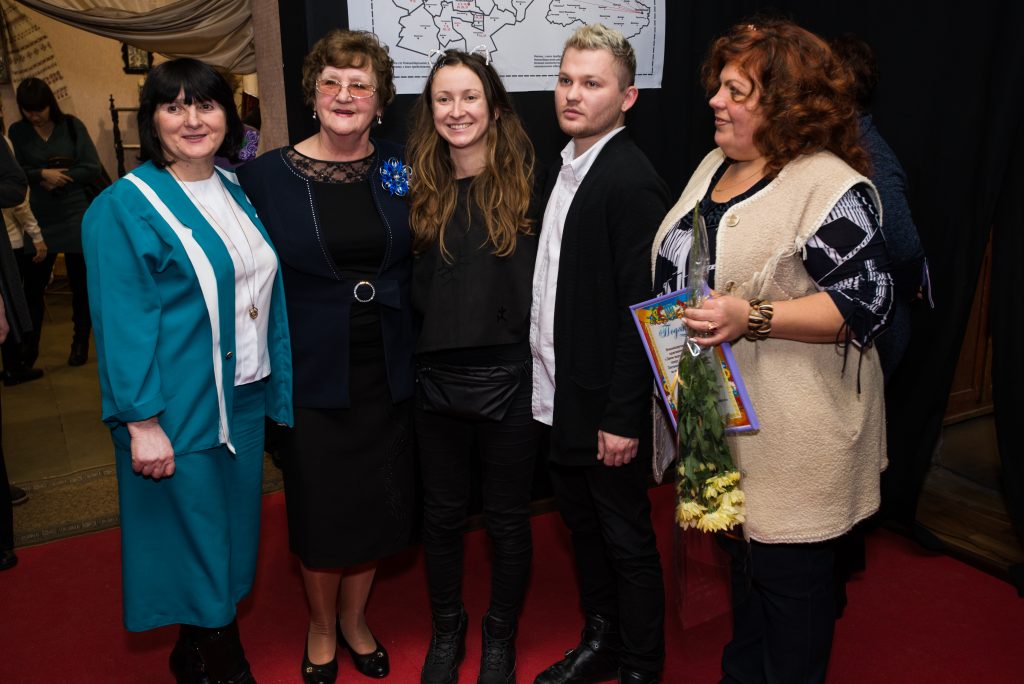 On February 14 the museumsof Donetsk and Luhansk regions started presenting their mini-projects. The Novoaidar local history museum in Luhansk region was the first to present the results of its work. The museum staff teamed up with architect Danylo Galkin and designer of the exhibition hall Dana Brezhneva to present the renewed exposition featuring the unique collection of national costumes of the Novoaidar area. Representatives of local self-government, professionals from other museums of Luhansk region, school students, media and visitors attended the opening.

The Novoaidar museum stores a unique collection of authentic costumes reflecting demographic diversity of Novoaidar area. The collection comprises the dress of Zaporizhzhia and Don Cossacks, the wear of inhabitants who resettled from Kyiv, Chernihiv and Poltava regions (hubernia) of Ukraine; from Kursk, Orel and Belgorod regions of Russia as well as of lemky that were forced to resettle in 1945. The Novoaidar museum received the major part of the costumes from the Kolyadivskyi museum set up in the house-workshop of dressmaker Ksenia Lykhachova.

The project aimed at restoring and strengthening ties between the Novoaidar communities by preserving the unique collection of costumes for future generations. 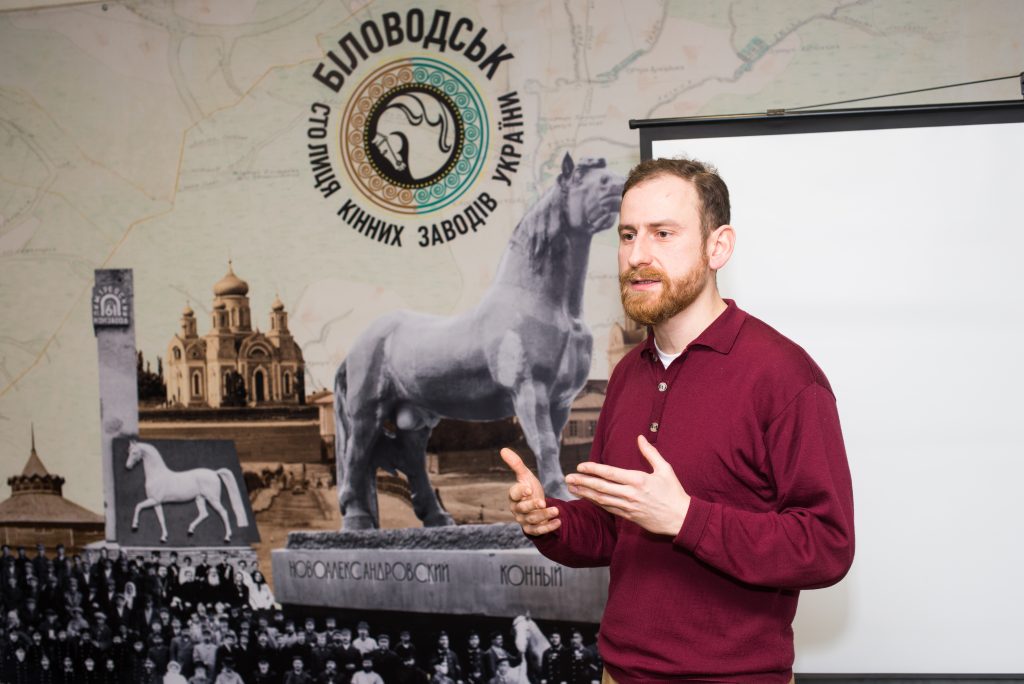 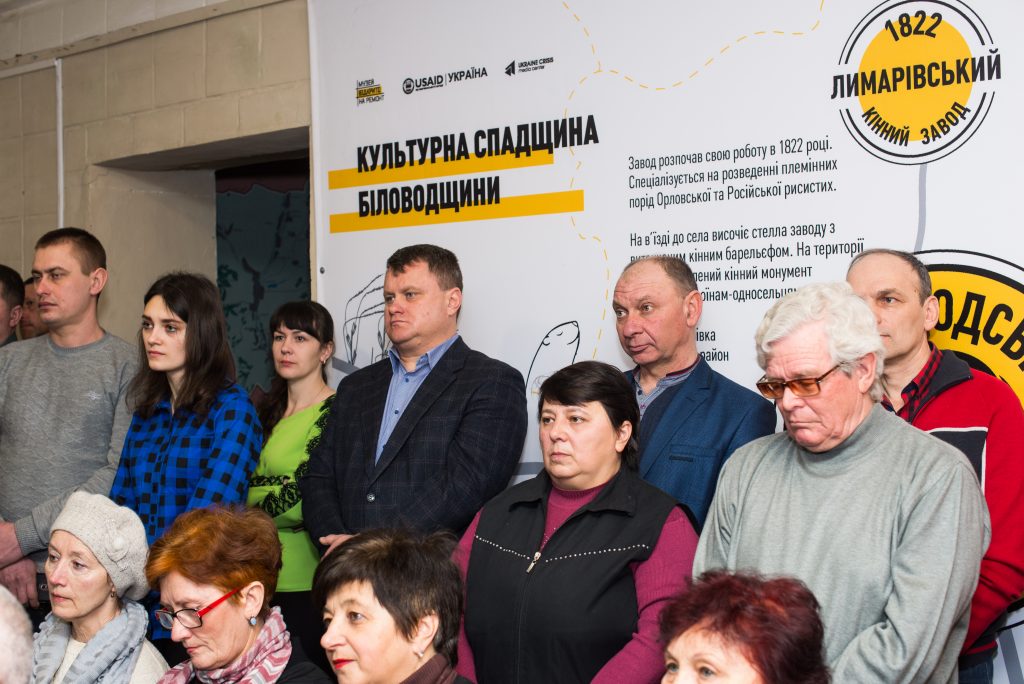 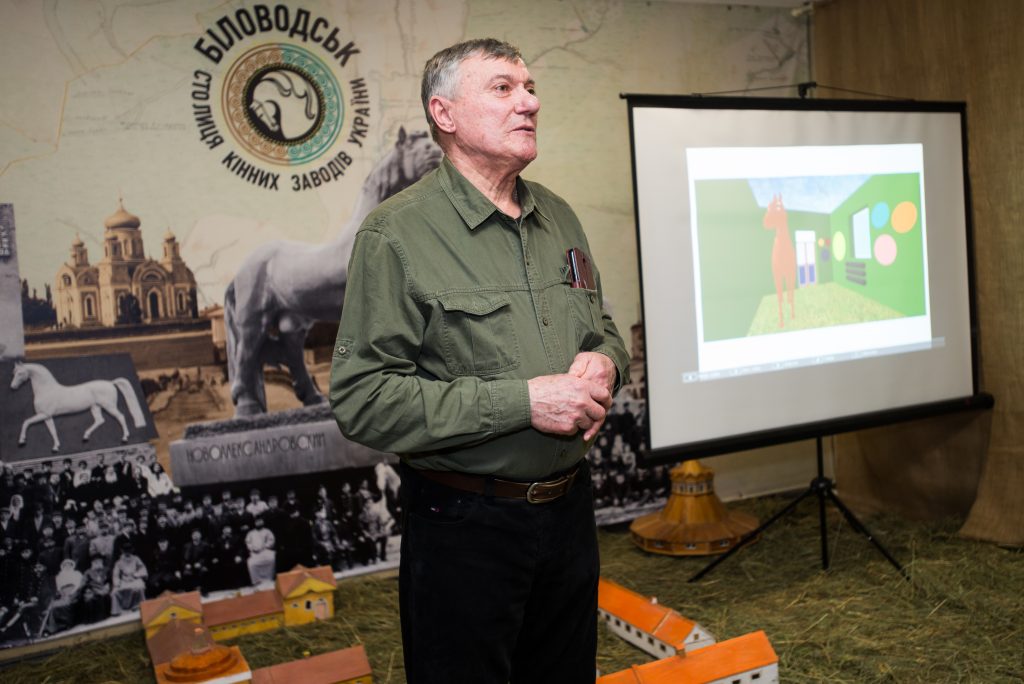 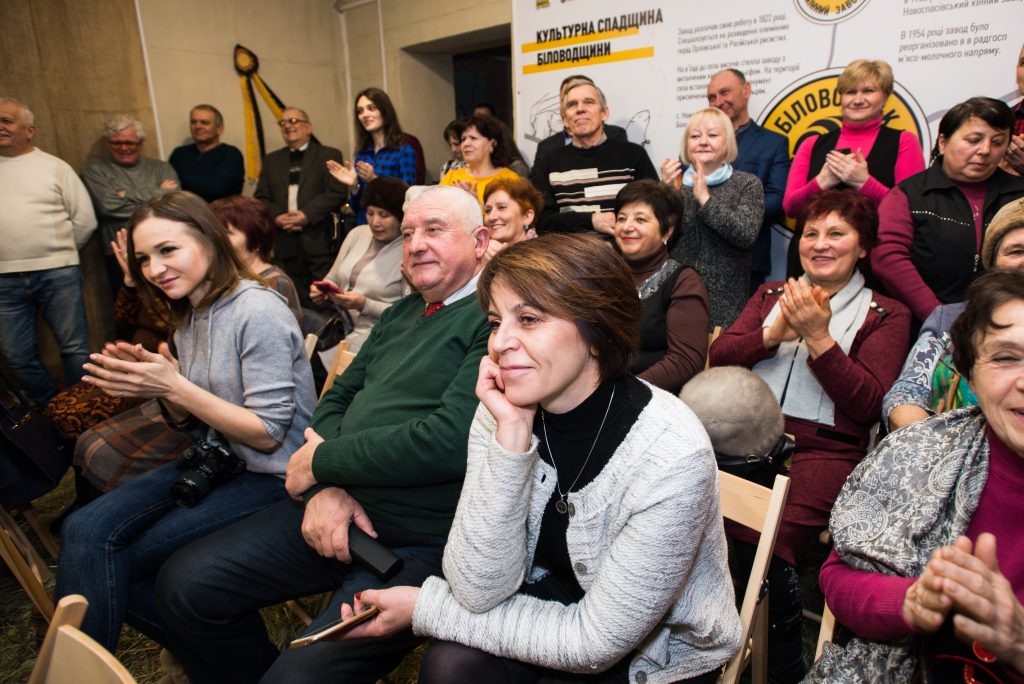 On February 15 the presentations went on at the Bilovodsk local history museum. The museum staff and the project curator Oleksiy Bykov presented the project “Bilovodsk is Ukraine’s horse farming capital”. Local history experts, directors of horse farms, representatives of the city community, organizers and project participants attended the opening. The area of Bilovodsk owes its unique cultural heritage to Ukraine’s five oldest horse farms. The Derkulskyi horse farm has recently marked its 250thanniversary. Horses of the Novooleksandrivskyi horse farm won first places in top-level races in the USSR 26 times.The Novospasivskyi horse farm (no.87) was established in 1932 based on former capacities of Derkulskyi and Lymarivskyi horse farms in the villages of Novospasivka and Pluhatar. The Striletskyi horse farm started breeding thoroughbred horses in 1920s, by 1924 the farm (also called “Striltsivka”) became one of the leading horse farms.

The project aim was to develop and preserve the achievements of the Bilovodsk-area horse farms to preserve the cultural heritage of the area. 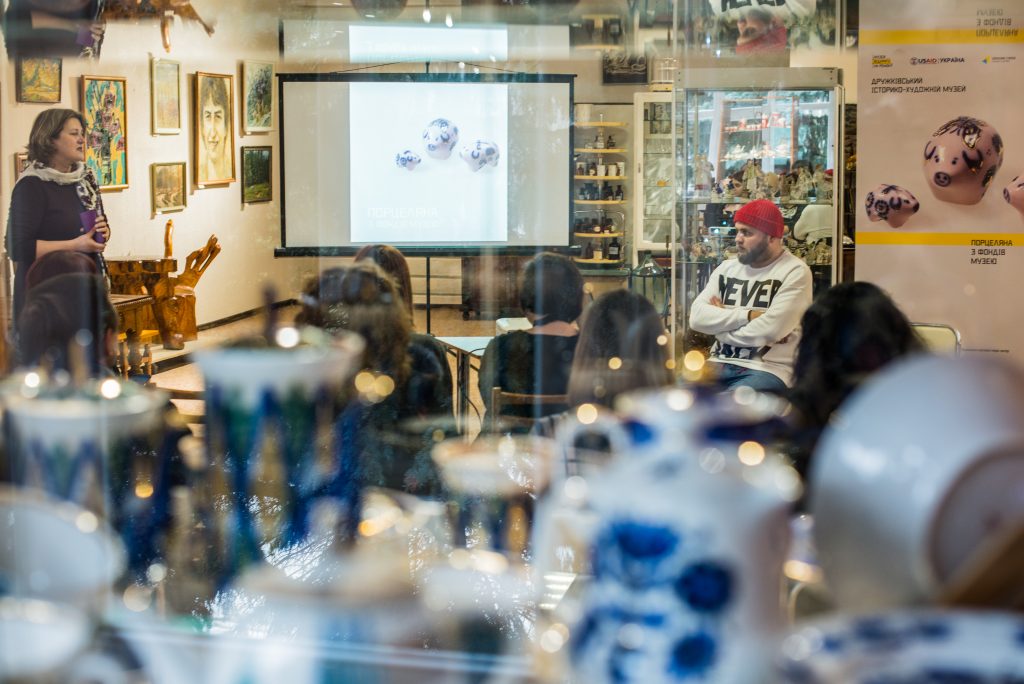 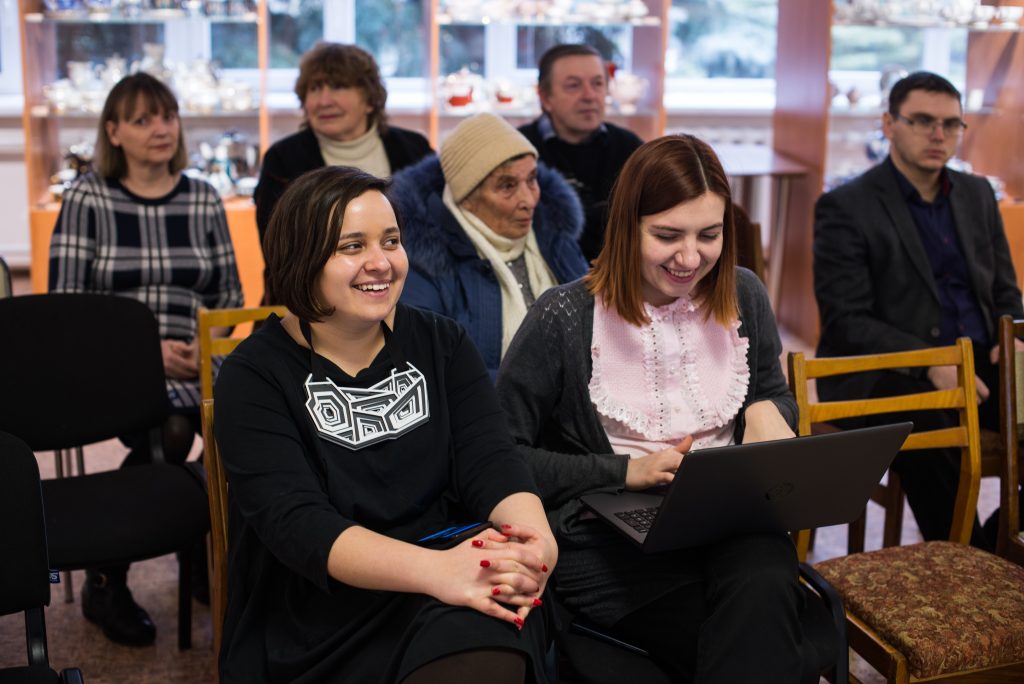 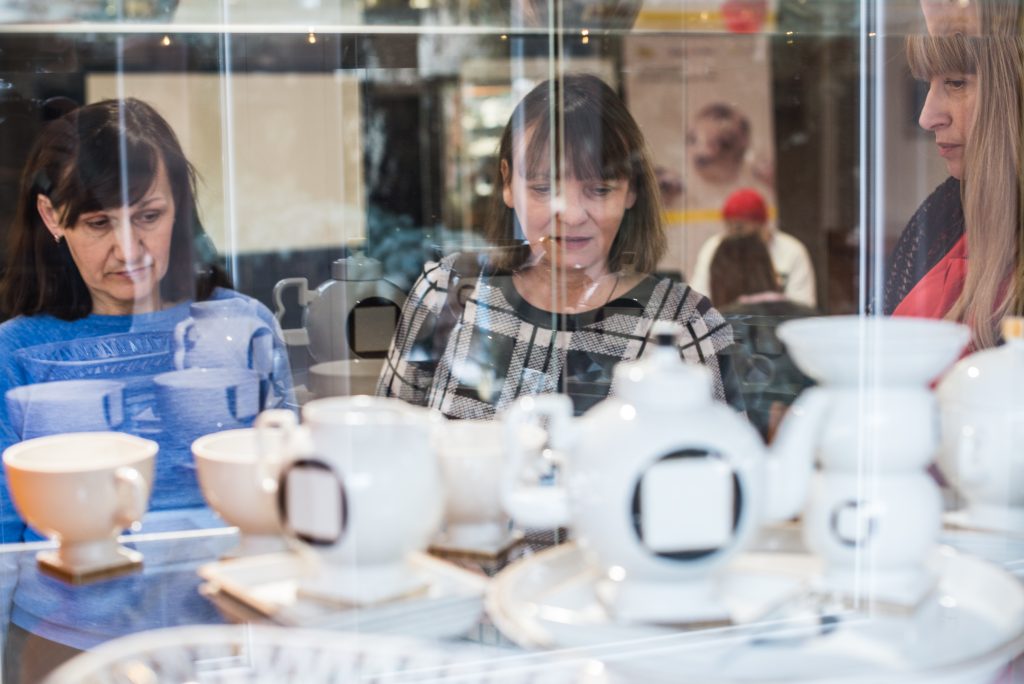 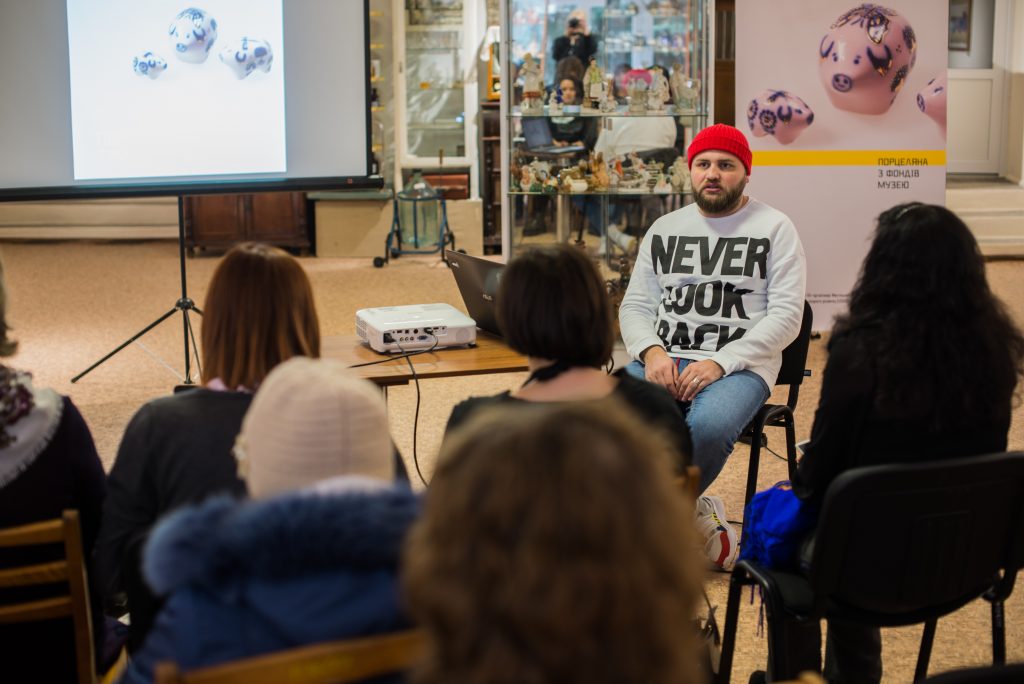 On February 16 presentation of museum’s mini-projects reached Druzhkivka, Donetsk region. At the Druzhkivka history and fine arts museum, museum staff together with Leonid Marushchak, head of the project “Under construction: Museum open” and photographer Natalka Dyachenko presented the catalogue of porcelain from the museum storage.

Druzhkivka hosts the country’s one and only porcelain factory. Over the years the factory has managed to create a unique kind of porcelain bearing the name of the town. Craftspeople at the factory are not just paying attention to the classic technique with the use of underglaze paints but are also showcasing the rich traditions of the Ukrainian folk art.

The project aims at preserving the unique collection of porcelain items produced by renowned craftspeople of Druzhkivka, combining them with the items produced in other cities, presenting art of different regions where porcelain is produced that is both related and unique at the same time. 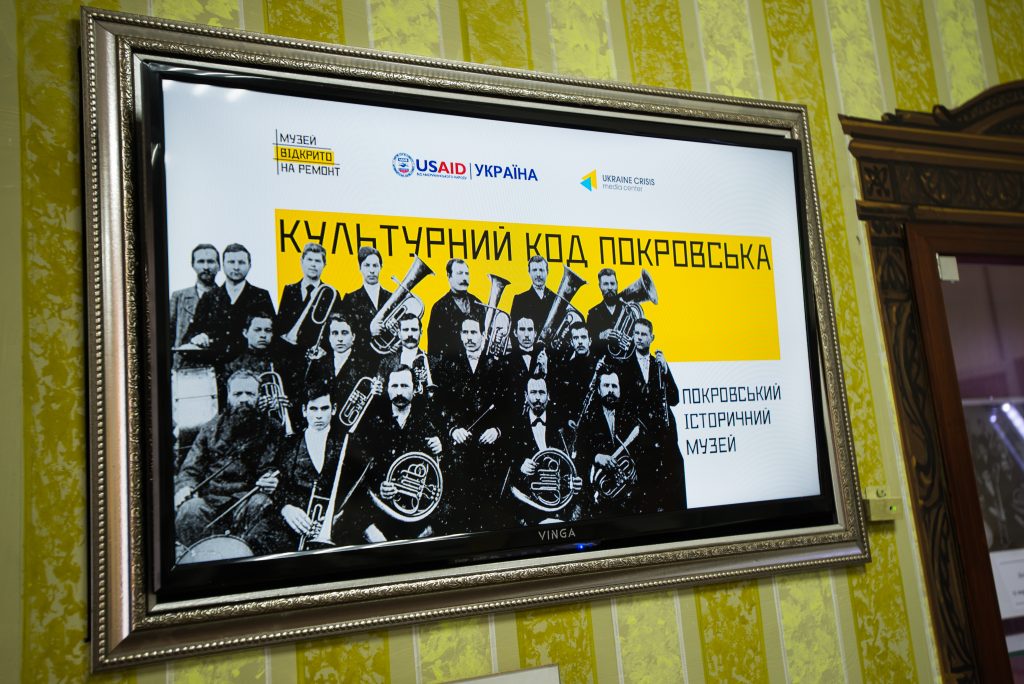 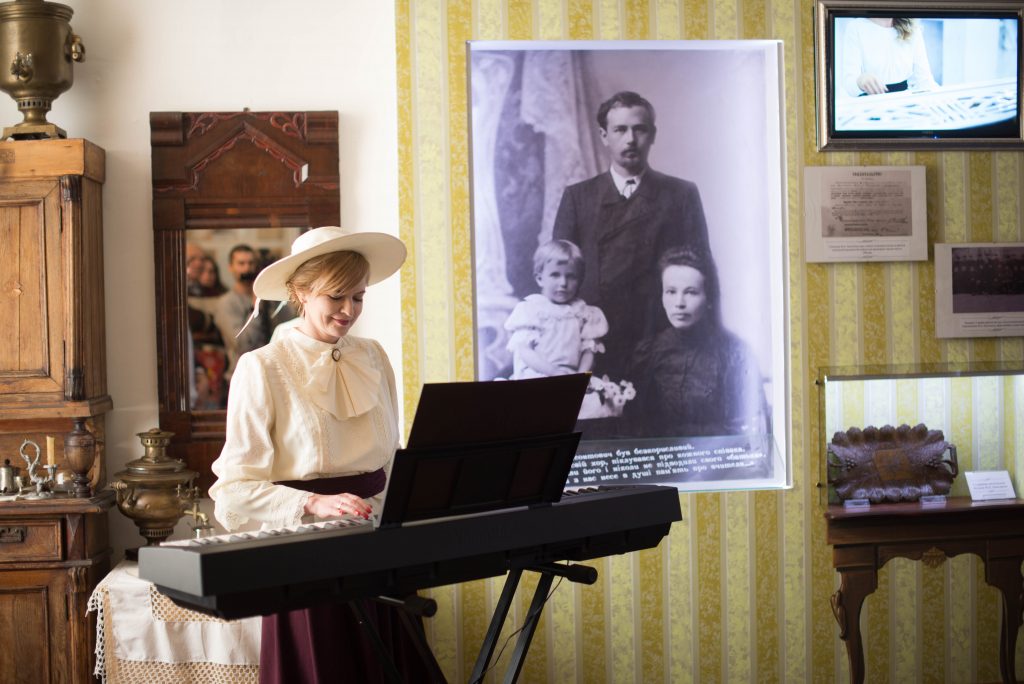 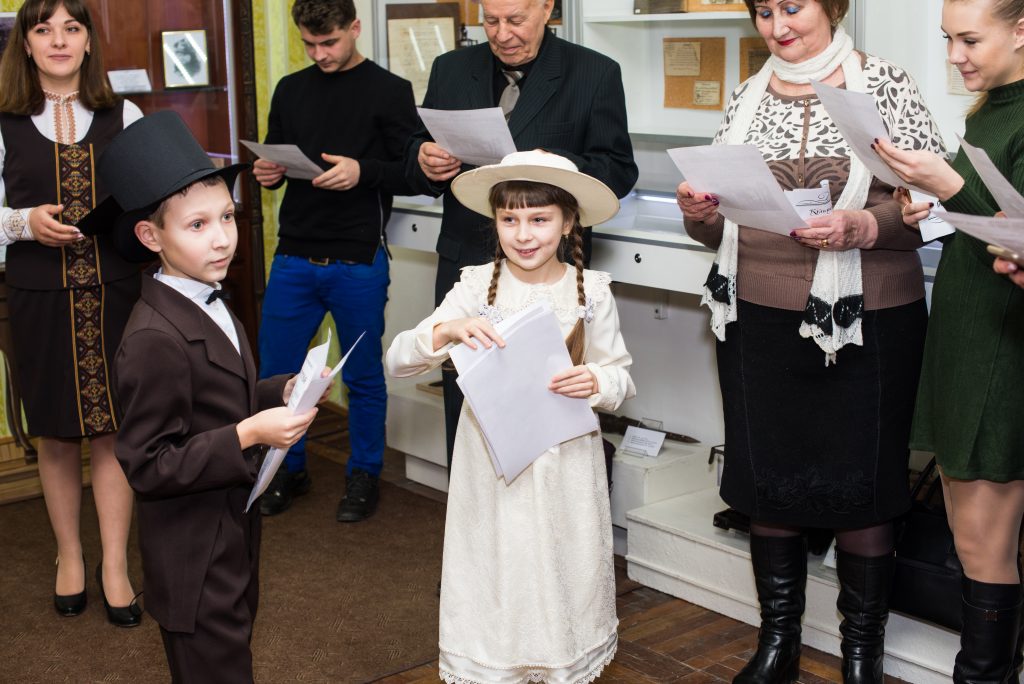 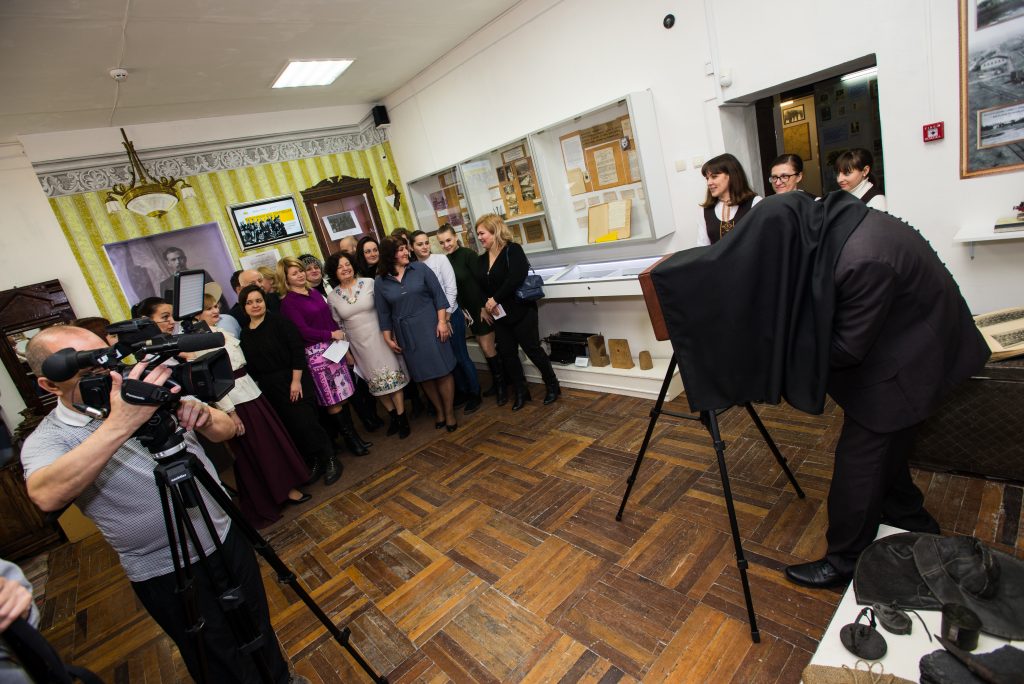 Presentation of the mini-project “The cultural code of Pokrovsk”

On February 18 “The cultural code of Pokrovsk” mini-project was presented at the Pokrovsk history museum.

The museum staff held a theatre-style excursion explaining how the town was founded. They presented the exposition of the hall “How the city was founded, grew socially and economically in the late 19th– early 1940s” renovated within the project “The cultural code of Pokrovsk.”

Pokrovsk emerged as a railway town that developed due to the railroad connecting two industrial regions. The basis of the town’s cultural life was laid by composer Mykola (Dmytrovych) Leontovych who worked for four years as a music teacher at the local railway school. He also established the first-ever workers choir in Ukraine, it also performed with an orchestra. At the same time the hall emphasizes the town’s industrial character (dinas factory, railroad depot, coal mines etc.) and its urbanist rhymes that intertwine with the musical part of its story. Thanks to Leontovych the industrial town gets a new reality where there is place for both hard work and enriching cultural leisure. 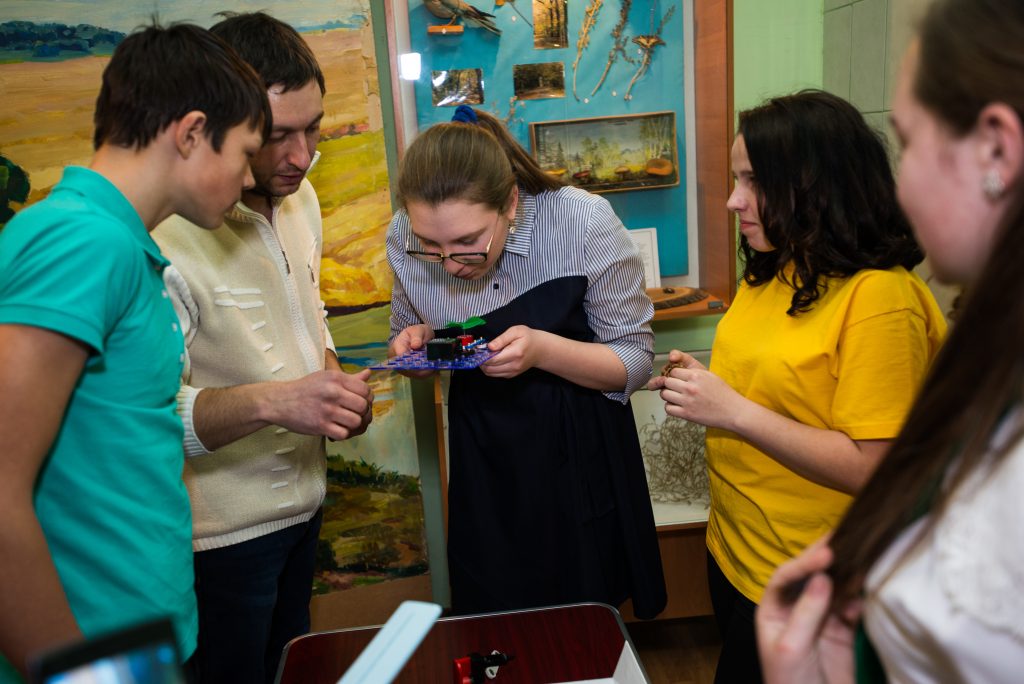 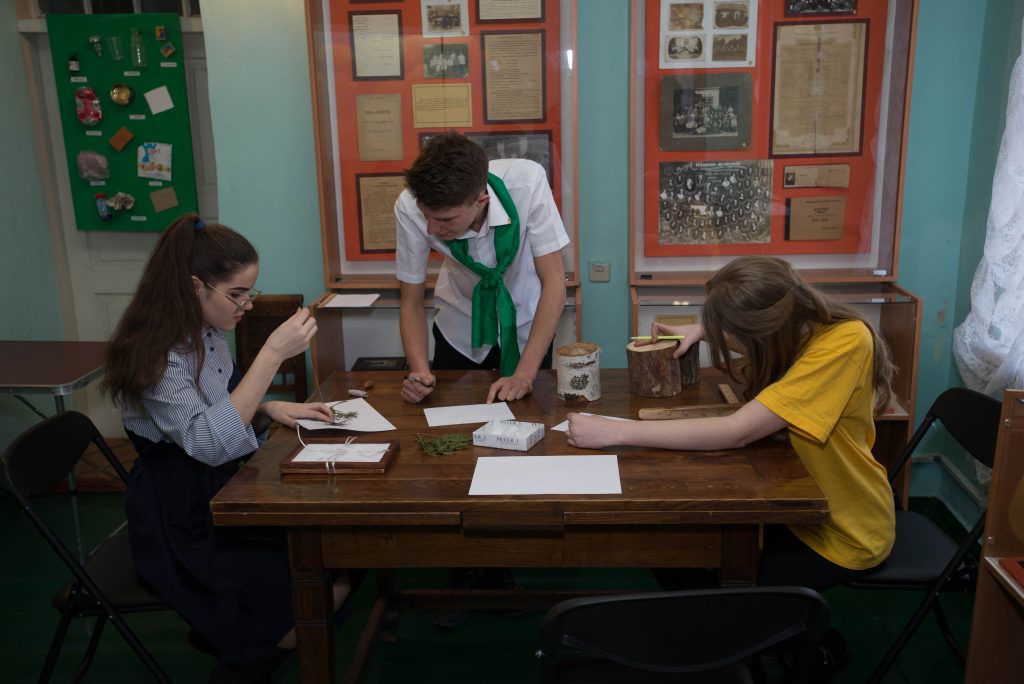 On February 19 “Ecological observatory” was presented at the Velykoanadolskyi forest museum. The museum staff used interactive equipment to familiarize the students of the Blahodatne school with renewable energy sources, waste sorting as well as with the area’s flora and fauna.

Velykoanadolskyi forest is a unique example of forestry in the steppe. Its first trees were planted in 1843 at the initiative of Viktor von Graff, a colonel of the forestry corps. The museum’s premises were constructed in the 19thcentury serving as a forest observatory.

“Ecological observatory” project aims at forming a new ecological culture with the young of the region by means of interactive space teaching basic ecology to the students of the regional schools and colleges in the form of a game. 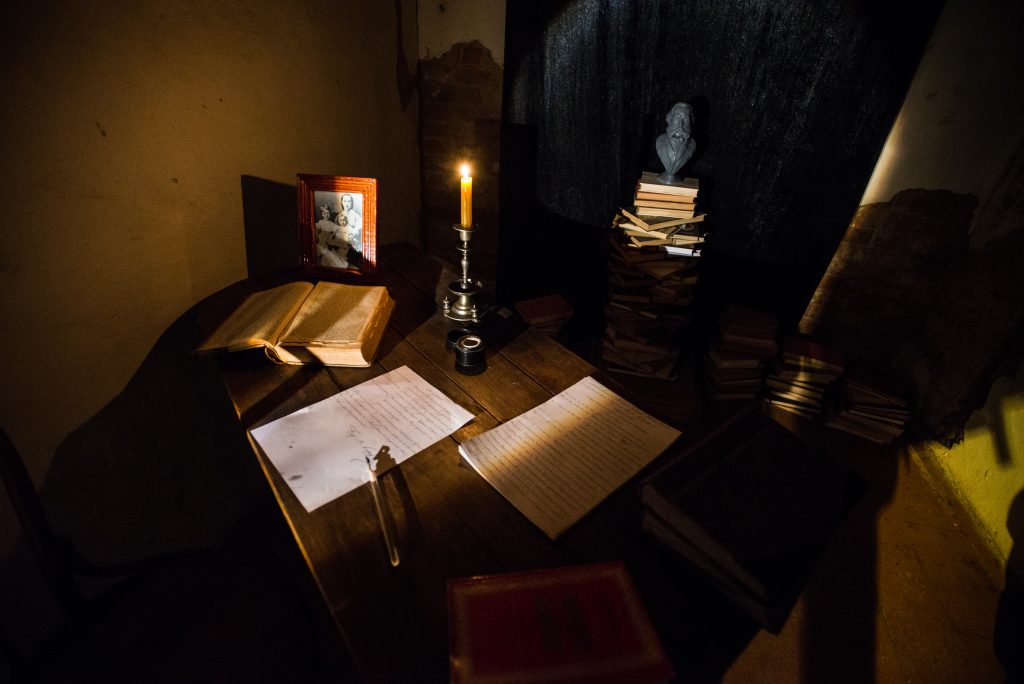 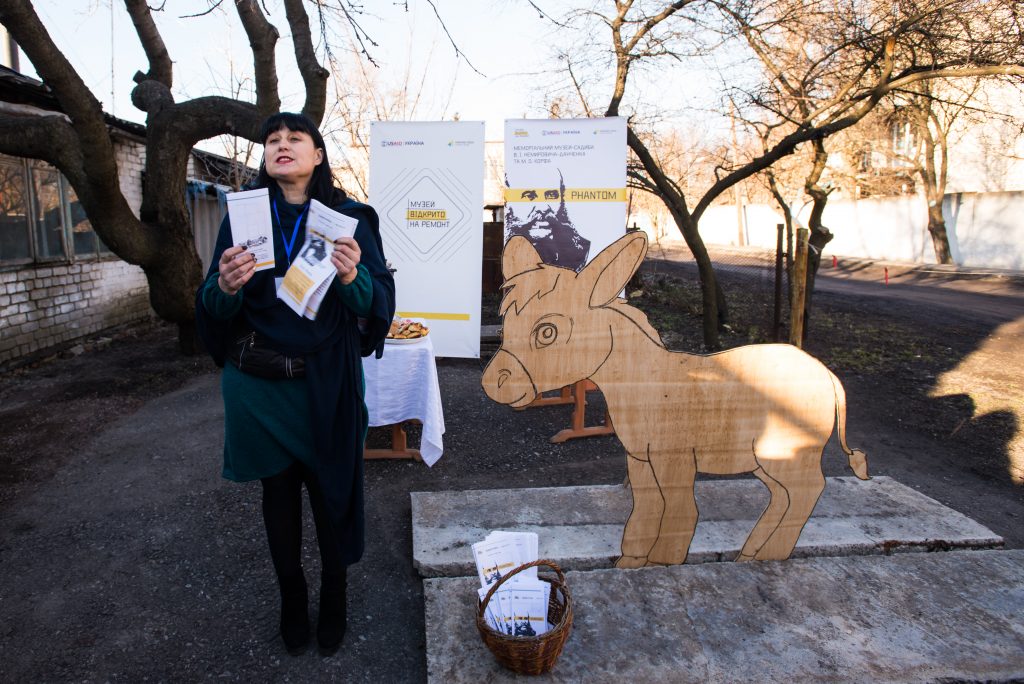 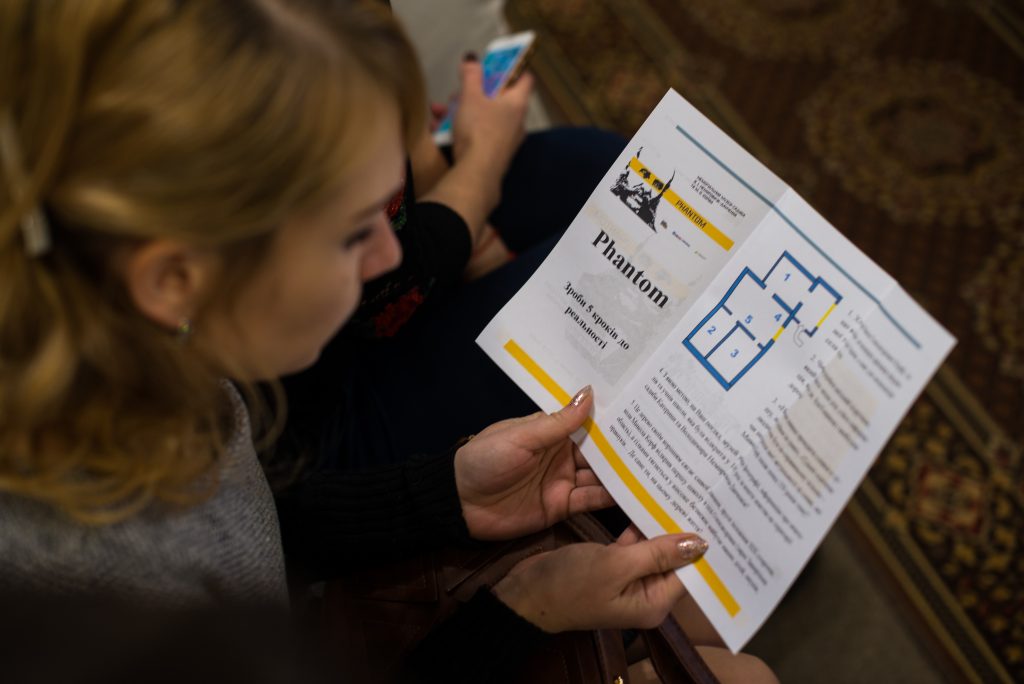 On February 19 the mini-project “Phantom” was presented in the Mansion museum of Volodymyr Nemyrovych-Danchenko and Mykola Korf.

The museum staff presented the exposition entitled “Phantom” in the school premises dedicated to the renowned teacher Mykola Korf. The village community, school students, representatives of local self-government at the village level and museum staff from other museums of Donetsk region familiarized themselves and analyzed the impact of Korf’s work on pedagogy as well as became part of the story themselves.

After Mykola Korf died, the first school commemorating him and named after him was opened in the mansion. Since 1895 when the school was founded it has lived through many changes. Over the last decades part of the building has been declining gradually turning into a ghost, same thing has happened to the figure of Mykola Korf in Ukraine’s historic and pedagogical environment. The main idea of the “Phantom” project is to create “phantom life” – an exposition in the old part of the building to revive the school of Mykola Korf’s times. The project is to also help consolidate and unite around the liberal and educational ideas of Korf the communities of towns where Korf actually worked – in Donetsk, Zaporizhzhia, Dnipro and Kherson regions. 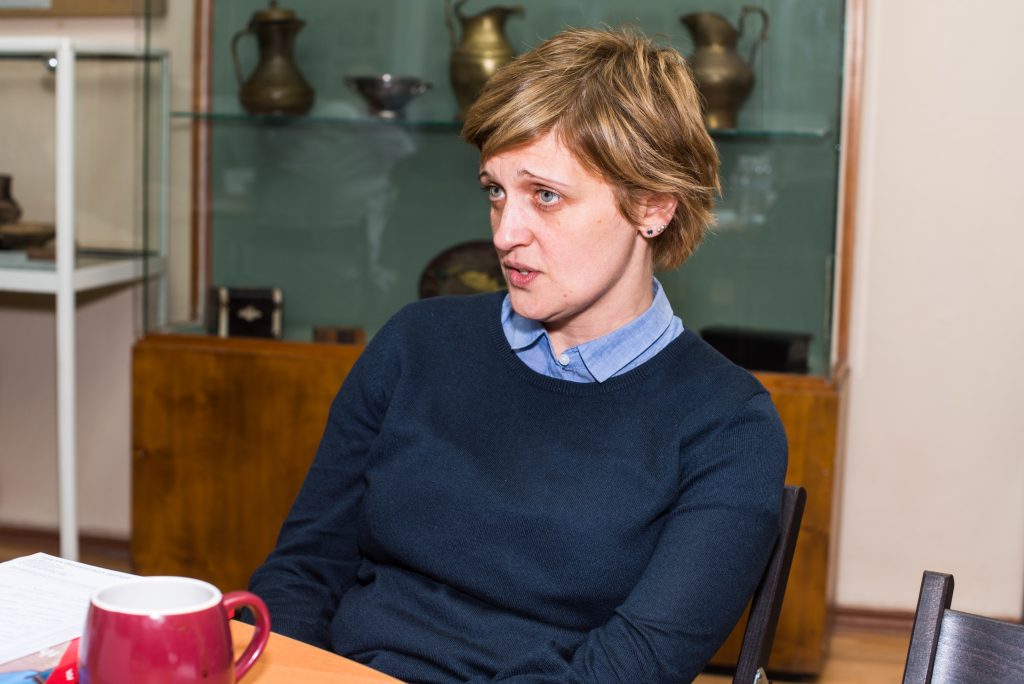 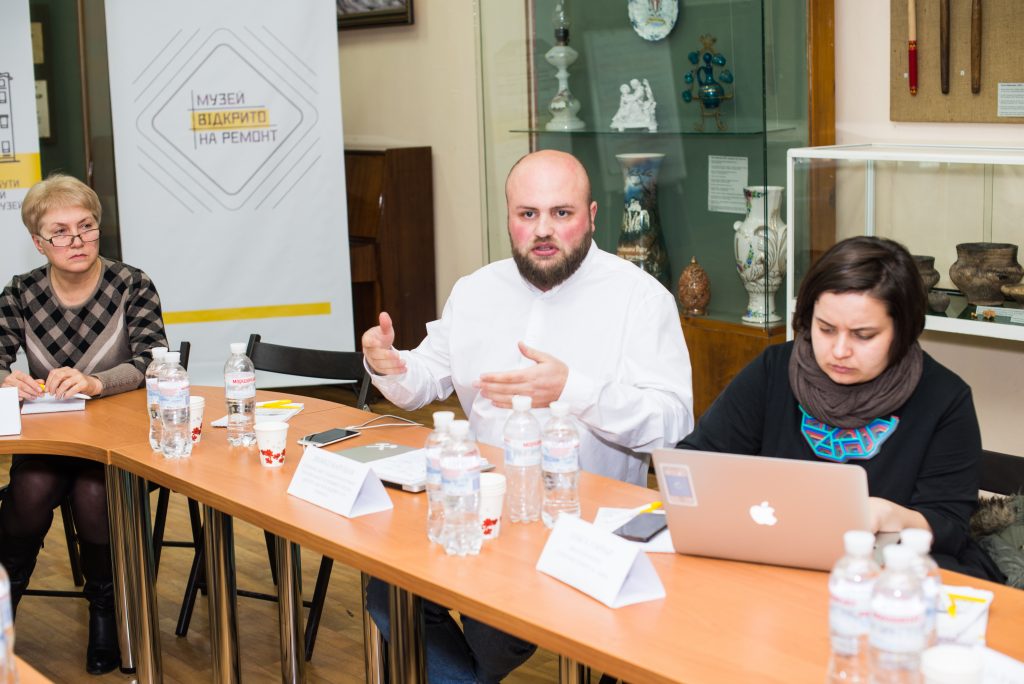 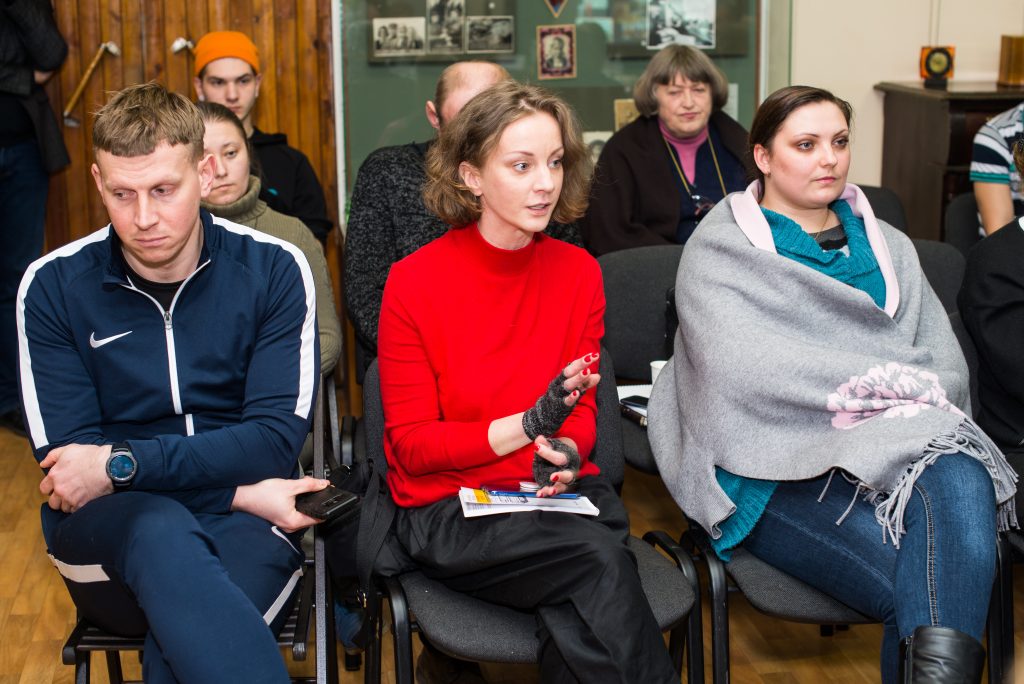 Presentation of the project results “Challenges of time or what should the Mariupol local history museum be like?”

On February 20the last museum mini-project was presented at the Mariupol local history museum.

Initiative group of the project “Challenges of time or what should the Mariupol local history museum be like?” presented the results of the research unveiling the vision of what the museum is that the city residents have.

During the round-table discussion representatives of the Mariupol community, local self-government, museum professionals and the project curator Maria Zadorozhna discussed the museum’s “road map” – its architecture, design, communications and place in the city and within the community.

In 2020 the museum will mark its 100th anniversary. It is its first centennial. The museum developed in Soviet times – in another state under a different ideology. Today inertia makes Ukraine’s local history museums continue the working course formed several decades ago. How to move on? Today there’s a choice of several directions – to become a museum or an entertainment place, a purely academic institution or choose the most difficult path of being a “museotainment” center prioritizing local history and showcasing all aspects of life in the area. Under such a scenario the museum is also supposed to become the center for all-round development equally of interest to children, youngsters and adults.