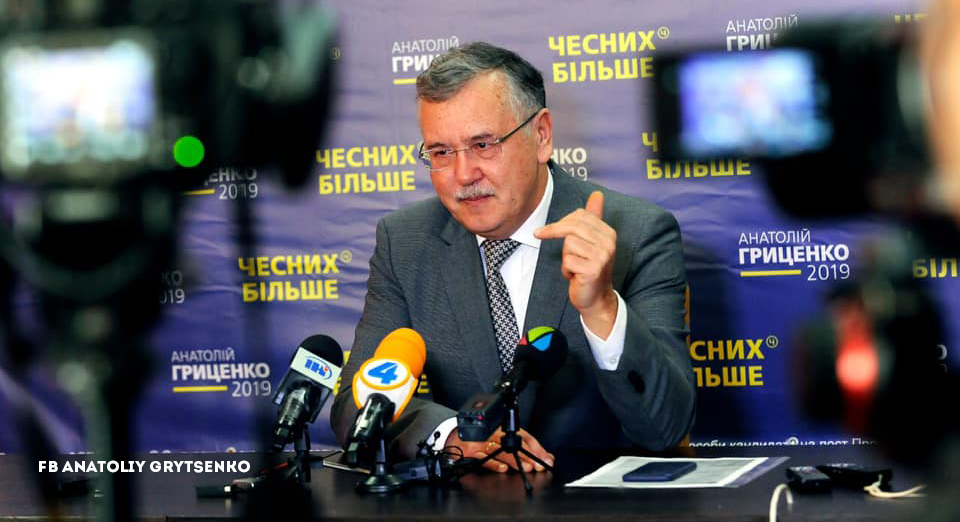 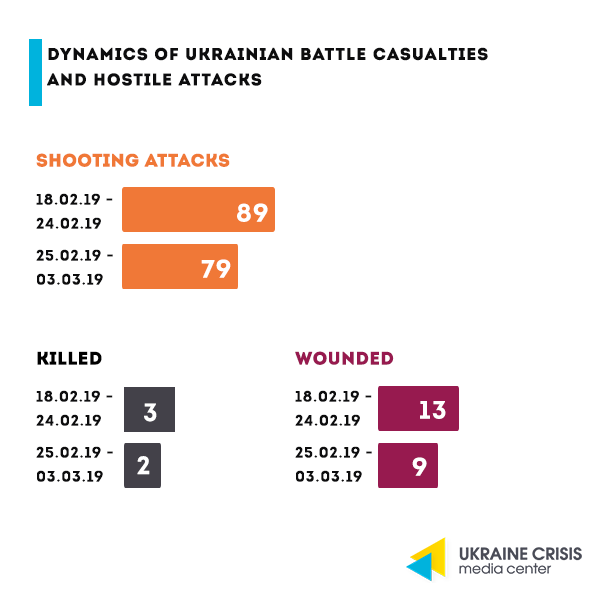 On February 28 Russia-backed militants fired upon the Ukrainian troops’ positions from Minsk-proscribed weapons including 122mm artillery, 82mm- and 120mm mortars. They fired a total of 143 artillery shells and mortar rounds. Russian proxies also fired upon the positions of Ukraine’s Joint Forces from infantry fighting vehicles, grenade launchers, heavy machine guns and small arms. The Joint Forces control the adversary on the contact line also adhering to the ceasefire commitments.

Elections 2019: what are the chances of the new democratic candidate? 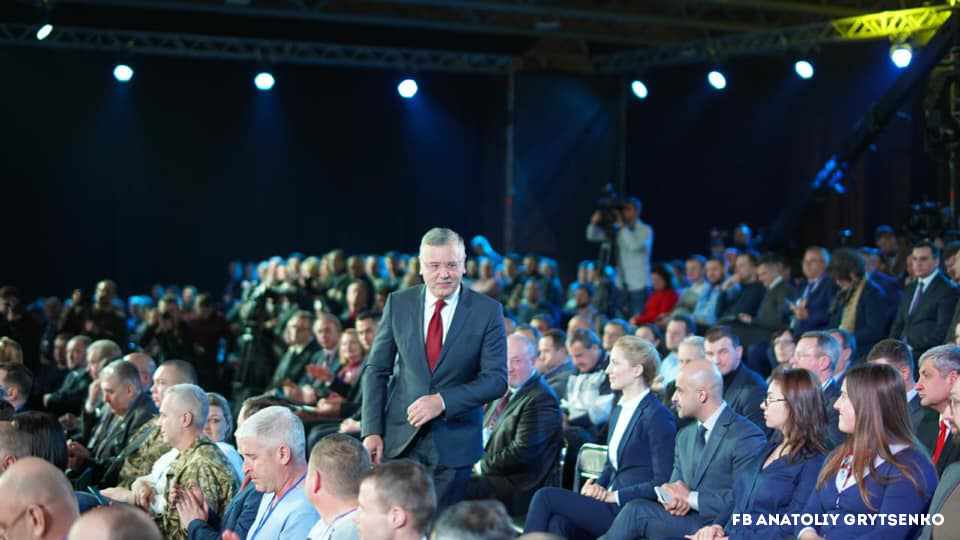 Corruption scandal in the defense sector as well as fake donors financing Yulia Tymoshenko’s election campaign made news headlines last week. These investigations may have a significant impact on the rankings of Petro Poroshenko and Yulia Tymoshenko – leaders of the election race.

Right after the scandal Lviv mayor, leader of the “Samopomich” party Andriy Sadovyi withdrew from the presidential race to support the leader of “Hromadyanska Posytsia” (Civic Position) Anatoliy Hrytsenko. “We now have a chance to elect a Ukrainian anti-corruption President, that’s why I decided to withdraw from the presidential election. I announce my support to the candidate Anatoliy Hrytsenko at the elections of the President,” Andriy Sadovyi said at a press-briefing in Kyiv on March 1.

Who is Anatoliy Hrytsenko? He’s a Ukrainian politician and military, Ukraine’s Defense Minister in 2005-2007. Hrytsenko has a military degree, he chaired the analytical service of the National Security and Defense Council between 1997 and 1999, headed the think tank Razumkov Center. Anatoliy Hrytsenko has campaigned twice to the post of the President. His actual campaign emphasizes the candidate’s integrity and his non-involvement in corruption schemes.

What is Hrytsenko’s current ranking? Prior to joining forces with Sadovyi, Hrytsenko was not one of the top-three candidates. According to the most recent public opinion poll held by “Reityng” (Ranking) group on February 19-28 and released on March 4, 25,1 per cent of the respondents who made up their mind and intend to vote, are going to support Volodymyr Zelenskyi. Petro Poroshenko and Yulia Tymoshenko share the second place with 16,6 per cent and 16,2 per cent respectively. The leader of the “Oppozytsiyna Platforma – Za Zhyttia” (Opposition Platform – For Life) Yuriy Boiko is likely to get 11,3 per cent of votes, Anatoliy Hrytsenko – 7,7 per cent, chief of the Radical Party Oleh Lyashko – 5,6 per cent, Andriy Sadovyi prior to withdrawing – three per cent.

At the same time the situation model designed in autumn 2018 showed that Anatoliy Hrytsenko has all chances to win from all the top three candidates.

Sadovyi’s position. In an interview to the Ukrainian media “Ukrainska Pravda” on March 1, the leader of “Samopomich” Andriy Sadovyi stated that by withdrawing from the presidential race he added at least 10 per cent of votes to Hrytsenko.

AnothercandidatesupportedHrytsenko. On March 2 the party “Syla Lyudei” (the Power of People) supported the decision of its candidate Dmytro Hnap to withdraw. “I withdraw to support the single candidate from the democratic forces. Sadovyi and Hrytsenko negotiated and decided it will be Hrytsenko,” Hnap told Hromadkse TV.

Decriminalization of illicit enrichment in Ukraine: what is it all about? 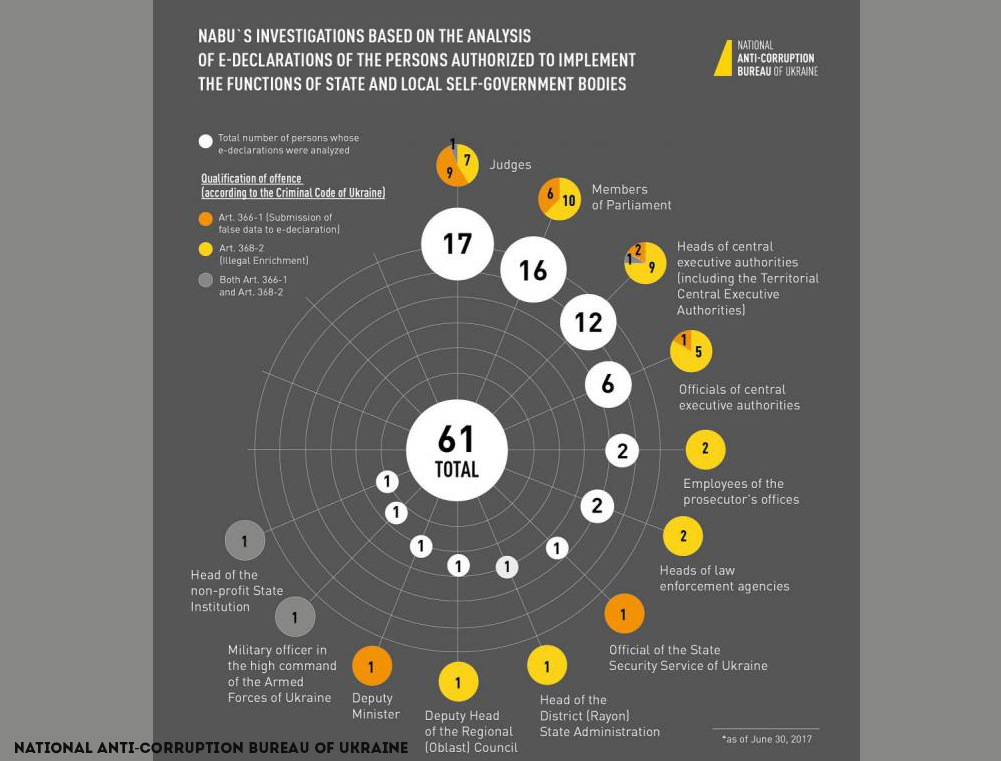 Criminal liability for illicit enrichment was introduced in 2015. It was part of Ukraine’s action plan for visa liberalization with the EU as well as the country’s commitment with the IMF cemented by a memorandum. The provision came into the spotlight last week.

The court decided that the provisions of the Article do not sit well with rule of law principles and with the presumption of innocence. According to the court, the Article on illicit enrichment allegedly forces the suspect to prove that their assets are lawful.

Reaction of the civil society and of experts.The Constitutional Court’s decision implies full amnesty for all officials with assets of dubious origin, it actually annuls the anti-corruption reform in Ukraine, stated Transparency International Ukraine and its ten partner organizations. As a result at least 50 cases on illicit enrichment of top officials currently investigated by the National Anti-Corruption Bureau will be closed. Indictments in all the cases currently considered in court will be also closed.

Moreover all civil servants, subject to e-declaration will get the green light to legalize the assets of unlawful origin acquired over the past two and a half years after the liability for illicit enrichment was introduced. It may well lead to the situation when the civil servant’s assets exceeding their official income by millions of hryvnia will thus become legal.

Revocation of liability for illicit enrichment ruins the concept of e-declaration mandatory for civil servants. It is going to turn the declaration system from the mechanism designed to uncover illegal assets and to hold liable into the system that is just informing on civil servant’s assets.

If there is no liability for illicit enrichment, civil servants will be declaring luxury assets without fear and with no legal consequences. Experts also emphasize that decriminalization of illicit enrichment violates Ukraine’s international commitments and may lead to termination of the cooperation with the International Monetary Fund.

Reaction of the EU. The EU expressed its concern with the Constitutional Court’s decision to annul the article of Ukraine’s Criminal Code on illicit enrichment. “We have certain concerns concerning yesterday’s constitutional court ruling concerning the illicit enrichment (…). Of course, we will need to asses this ruling in more detail, but it must be said that the principle legal presumption is the principle that the person who possesses certain assets, certain wealth, has to be able to prove the origin of those assets,” said Valdis Dombrovskis, the European Commission Vice-President for the Euro and Social Dialogue, as quoted by the media “Europeiska Pravda”.

Reaction of the President Poroshenko.The President of Ukraine Poroshenko said he understands the indignation around the decision of the Constitutional Court to revoke the article of the Criminal Code on illicit enrichment.

President Poroshenko stated that he signed off a draft law on criminal liability for illicit enrichment last Thursday and sent it to the Verkhovna Rada (Ukraine’s Parliament) for immediate registration. He also said he hopes the MPs will be willful and brave enough to support the bill.

What the draft law is about. The draft law submitted by the President suggests instead of the article 368-2 that was ruled unconstitutional, add the article 368-5 “illicit enrichment” to the Criminal Code that foresees imprisonment for up to two years, ban to hold certain positions for up to three yearsand confiscation of assets for illicit enrichment.