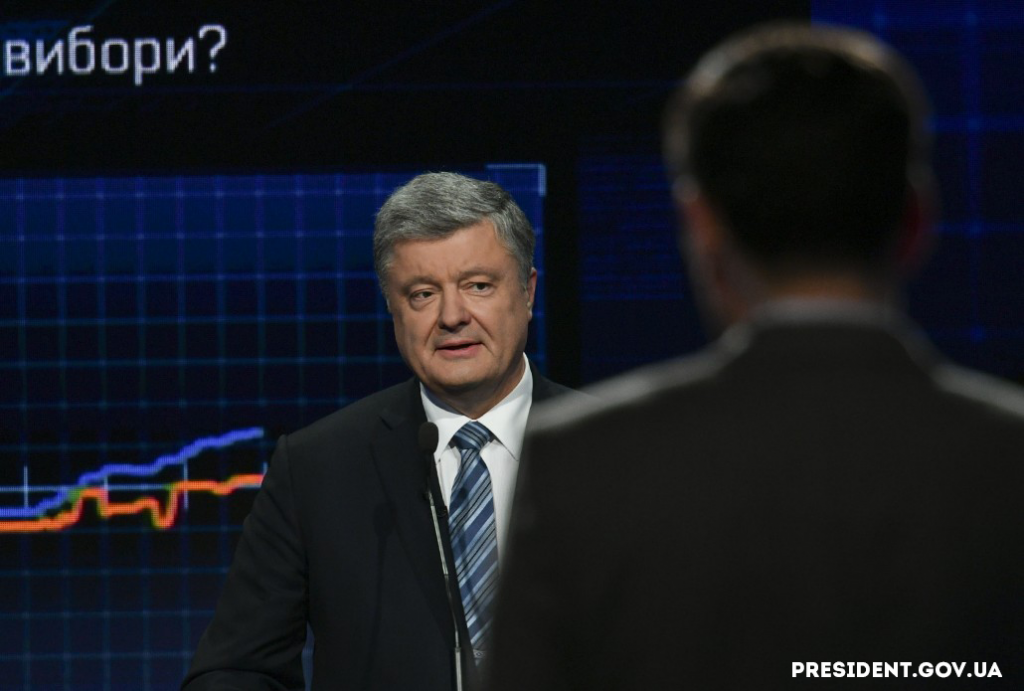 On March 31 Ukrainians voted in the first round of the presidential elections. Showman Volodymyr Zelenskyi got the biggest share of votes – over 30 per cent. The actual President Petro Poroshenko also goes through to the second round with the 16-per-cent result. The pre-election battle between the candidates will continue until the second ballot on April 21. UCMC is following both candidates campaigning. We’re presenting a wrap-up of the first week after the first round.

After the first round the hottest topic discussed is holding public debates between the candidates prior to the second round. The debates would likely become a chance for the actual President to win back part of the votes (Poroshenko is known to be a skillful public speaker). The debates is what the society needs in the first place – according to the opinion polls 73,5 per cent of voters would like to see the two candidates for President debating. At the current elections, more than ever the favorite of the first round remains absolutely unknown to the society as a prospect politician.

Election favorite is a persona incognita

Holding the candidate popular while not knowing his program shows that Ukrainians vote for the image of a candidate instead of assessing their actual results and advantages. Ukrainians vote with emotions, and emotions are what a successful showman knows how to deal with.

To debate or not to debate?

The favorite of the election race Volodymyr Zelenskyi has been continuously avoiding interviews since the beginning of the campaign, he has no experience in public debating or answering tough questions. He is trying to stay new by avoiding debates, talking to loyal journalists and communicating as little as possible. Instead he is talking to his audience with videos giving no answers to the voters’ questions but giving them his own agenda.

So no wonder that responding to the society’s expectations about the debates and to the pressure by the team of the actual President, Volodymyr Zelenskyi released a video on April 3 challenging Poroshenko to debate. He called to hold them not in a studio but on the Olimpiyskyi (Olympic) stadium in Kyiv. He also presented several demands to Poroshenko including medical examination. “(If you want) a stadium, let it be a stadium,” – in nine hours the actual President accepted the challenge and agreed to the suggested place to meet. Taking up the initiative Poroshenko also invited Zelenskyi to make the tests at the medical station at “Olimpiyskyi” the next morning, on April 5. Both candidates took the tests: Poroshenko at the stadium’s medical station, Zelenskyi in the privately owned laboratory “Eurolab” (owned by a Russian businessman to be precise).

Later, in the evening of April 4 Zelenskyi released another video in which he invites Yulia Tymoshenko to be the debates’ moderator. Tymoshenko’s campaign office has not responded yet, Poroshenko’s team took it as a disrespectful gesture towards Tymoshenko. Zelenskyi’s never-ending demands ahead of the debates are possibly keeping him the longest possible from the ultimate answer if the debates are to happen or not.

Meanwhile, despite the public broadcaster agreed to holding the debates at the stadium (if there is respective state financing), the Central Election Commission claimed that the debates at “Olimpiyskyi” is “a form of election campaigning” and is thus to be paid from candidates’ funds.

Official debates will take place on April 19 in the studio of Suspilne (Ukraine’s public broadcaster). Should one of the candidates refuse, another one will be able to use the time on air to speak on his own. It is quite possible that Ukrainians will see two rounds of debates – the unofficial one at the stadium and the one foreseen by the law – in the public broadcaster’s studio.

The team defines the leader: who is in Zelenskyi’s team?

Zelenskyi’s team has not yet released the list of appointments that the candidate will make if elected President, the candidate promised to make it prior to the second round.In the meantime in focus comes his team – the society tries to figure out the vectors of his future policy by scrutinizing the individuals of his campaign office and the financing they get.

Chief public speaker of the team is political consultant Dmytro Razumkov. He is a son of Oleksandr Razumkov, former head of the Center for economic and political research renamed into the Razumkov Center after Oleksandr passed away. Between 2006 and 2009 Dmytro Razumkov was a member of the Party of Regions, during the 2009 and 2014 elections he was a consultant to Serhiy Tyhypko. In the interview to ZIK TV channel he claimed that he’s working for Zelenskyi free of charge.

Financing linked to the Party of Regions

Investigative journalists of Bihus.info discovered that among the donors that contributed to Zelenskyi’s campaign there are individuals linked to businessman Pavlo Fuks and to the former chief of the President’s office in Yanukovych times Andriy Portnov.

Yevhen Venychuk donated UAH 100 thousand (USD 3,7 thousand), he is thought to be linked to MP Serhiy Lyovochkin and Andriy Portnov. The investigative journalists discovered that both Portnov and Fuks are linked to Venychuk’s company.

Zelenskyi’s communication strategy proved to be successful in the first round of elections. The character of Holoborodko from the TV series secured him the image of a “simple guy” from outside of the system, while the bright digital campaign in the Internet and on social media won over the traditional campaigns of other candidates whose stakes were on TV and billboards. He also managed to attract the votes with the “mirror” communication technique – by avoiding questions, the dialogue with voters, not formulating clear messages and avoiding hard-talk interviews etc. It all gives the voters who have prejudice towards the “old faces” in politics a chance to imagine Zelenskyi’s beliefs to their own taste and consider him their candidate.

Would that be enough to secure Zelenskyi’s victory in the second round? The first week after the first round demonstrated that the communication by Zelenskyi’s campaign office can be winning as it makes the opponent accept the rules he sets. At the same time it may lead to failure – the “terrorist’s logic” whose demands never end and give his opponent no time to actually fulfil them, cannot last forever. The video exchange on the Internet is quickly getting the audience. However sooner or later the time will come to give clear-cut answers and meet the main opponent in real life not in a virtual dialogue. This is where Zelenskyi’s chances to win may turn to be not so convincing.