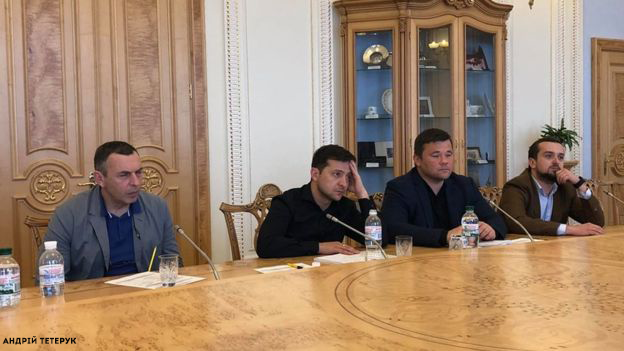 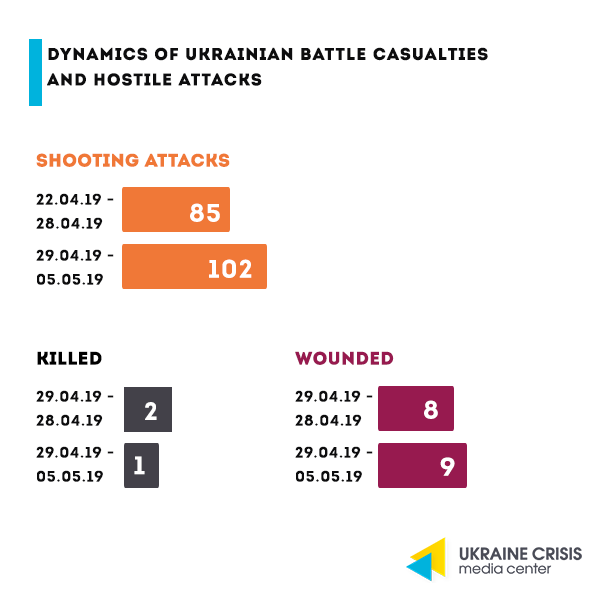 Russia-backed militants were violating the ceasefire, kept using the Minsk-proscribed 82-mm and 120-mm mortars. They also fired upon the Ukrainian troops from the weapons mounted on infantry-fighting vehicles, grenade launchers, heavy machine guns and small arms.

Russia’s proxies restarted using the tactics of mobile batteries. On May 2, while exercising, mortar units fired upon the Ukrainian troops’ positions near Novoluhanske with 82-mm mortars and near Avdiivka with 120-mm mortars.

When will Zelenskyi be sworn into office and why the date is important? 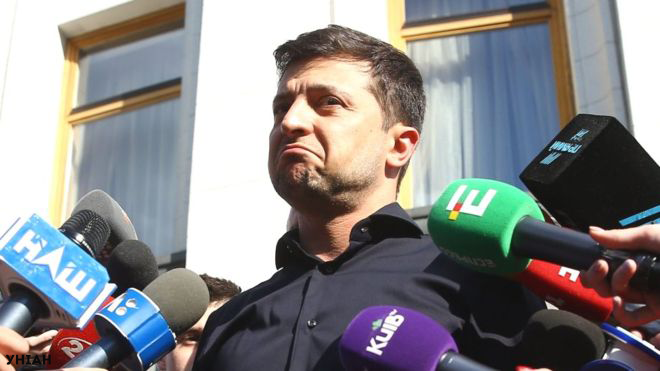 At the meeting with heads of parliamentary factions on May 19 President-elect Volodymyr Zelenskyi suggested to hold the inaugural ceremony on May 19.

He also sent a formal letter to the Head of the Parliament Andriy Parubiy asking to set the date in question for inauguration. The newly elected President hopes that the Verkhovna Rada (Ukraine’s Parliament) will adopt the respective decision during the sitting on May 14.

Why the inauguration date is important? It is of utmost importance to the President-elect that the inauguration takes places before May 27, 2019. It is the only way he will be able to dissolve the Verkhovna Rada. According to the law it is not possible to dissolve the Parliament six months ahead of the parliamentary elections. The next election is scheduled for October 27, 2019.

Meanwhile, there is no pro-President majority in the actual composition of the Parliament. To the newly elected President it is of critical importance to have support within the Parliament, as without efficient Rada he will find it extremely difficult to start implementing his election promises, so that his popularity will start to fall. Six months ahead of the parliamentary elections he is facing the risk of losing much of the electoral support.

Official election results were released on May 3, according to the law the inauguration must take place before June 3.

Ignored by the Parliament. Heads of factions that make up the parliamentary majority – Artur Herasymov of the Petro Poroshenko Bloc and Maksym Burbak of the Narodnyi Front (People’s Front) were not present at the meeting between the heads of factions and the President-elect. Zelenskyi noted that they may have their reasons while it is not about their attitude to him personally but a matter of respect for the people of Ukraine who chose their President. 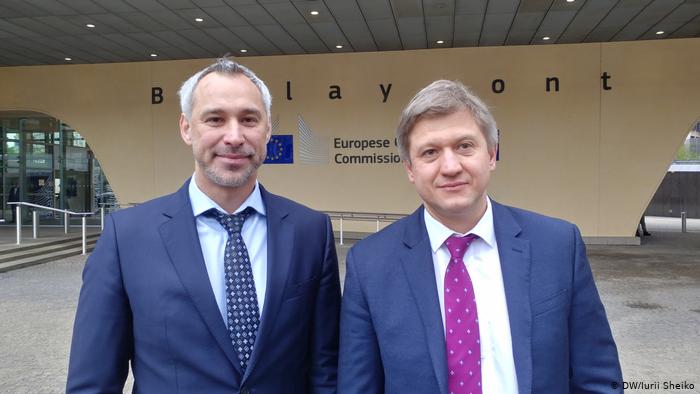 Advisors to Ukraine’s President-elect Zelenskyi Oleksandr Danylyuk and Ruslan Ryaboshapka discussed in Brussels the support to the first moves of the new head of the state.

On May 3 they met with cabinet representatives of the European Commission President Jean-Claude Juncker, of the European Council President Donald Tusk and of the European Commissioner for European Neighborhood Policy and Enlargement Negotiations Johannes Hahn. “The discussion focus was on the assistance by western partners in the implementation of anticorruption policy, judicial and economic reforms, ensuring the rule of law. These are priority directions of the newly elected President of Ukraine,” Zelenskyi’s press service stated. Ruslan Ryaboshapka said the EU supports revision and new approaches to the judicial reform in Ukraine. Ryaboshapka also said that Ukraine’s anticorruption system needs to demonstrate the actual results of its work or explain the Ukrainian society why they are missing.

Cooperation with the IMF. The International Monetary Fund (IMF) chief Christine Lagarde reassured that the IMF will be further supporting Ukraine. “The Fund stands ready to continue to support Ukraine in these efforts,” the IMF’s Managing Director said. Oleksandr Danylyuk said that reinstalling criminal liability for illicit enrichment is one of the conditions for the Ukraine-IMF cooperation to continue. “Criminal liability for illicit enrichment will be reinstalled. We also introduced an additional tool that will help annul the negative effect – that of the actual amnesty to the illicit capitals that became possible due to the decision by the Constitutional Court of Ukraine,” Ryaboshapka said.

Political prisoners: Ukrainian delegation to the International Tribunal for the Law of the Sea 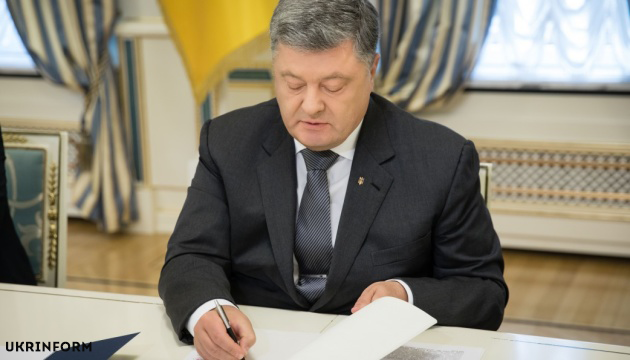 President Petro Poroshenko signed the decree delegating Ukraine to participate in the hearing of the case against the Russian Federation on the immunity of three Ukrainian navy ships and 24 crew members. The decree names the delegates – hearing participants. The delegation will be headed by the Deputy Foreign Affairs Minister on European Integration Olena Zerkal. Russia said they will not be taking part in the hearing on temporary measures in the case of Ukrainian naval ships and their crew members’ immunity at the International Tribunal for the Law of the Sea. 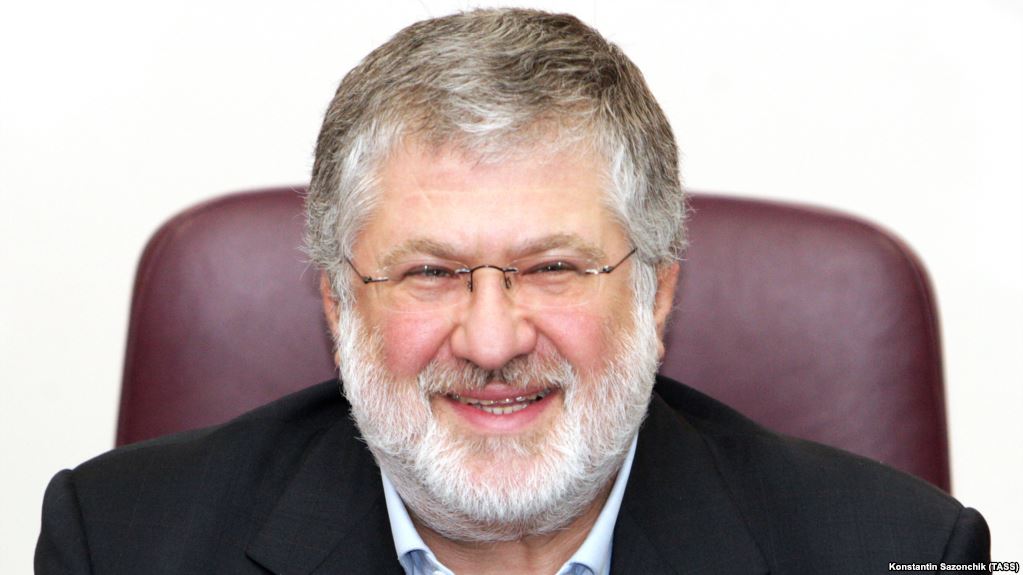 Ukrainian investigative media Bihus.Info released the first part of the interview with oligarch Ihor Kolomoyskyi on their YouTube channel. Kolomoyskyi is thought to be linked to the winner of the presidential race Volodymyr Zelenskyi and is openly in conflict with the outgoing President Petro Poroshenko. We herewith present the key parts of the interview with the runaway oligarch recorded in Israel.

On elections. “We have a fan club of Zelenskyi. At the presidential elections I was rooting against Poroshenko. Me and Avakov (Interior Minister – edit.) consider Zelenskyi’s result to be a joint victory. Poroshenko lost the elections because he does not own the 1+1 TV channel. In February 2016 Poroshenko agreed to buy the 25-per-cent share of the channel from the Surkis brothers. He then wanted to agree that I sell him 25 per cent more. The sum was about 250 million.”

On Yanukovych regime and Maidan.“Yanukovych in power resulted in Maidan, but revolution is always bad. Maidan resulted in the loss of 13 million people of population, the loss of Crimea and Donbas. Andriy Portnov (former head of the Presidential Administration under Yanukovych) is not an apologist for the Yanukovych regime, he was doing his work. I have a good rapport with him. He did nothing at all and has nothing to do with Zelenskyi’s team.”

On “civil war”. “In Donbas there’s civil war or, more precisely, civil conflict. Ukrainians are fighting against Ukrainians. Russia has provoked it and supports one camp of Ukrainians. If there was no Russia, Ukrainians would have made peace with each other. The hot phase of the war is in Donbas, the cold one is in the rest of the country. The cold side is manifested through hatred and murders, particularly of journalists: of Buzyna on the one hand and of Sheremet on the other.”

On Privat Bank. “Privat Bank was nationalized illegally. Besides, the state violated the PrivatBank’s nationalization agreement: the 2017 budget did not foresee the possibility of reverse takeover. I can exchange the USD 2,5 billion reimbursement for illegal nationalization, say, for bonds. Or restitution can be held: keep what’s yours but give us back what’s ours. During the clean-up of the banking system from unreliable banks 60 of the 80 banks were liquidated unjustly.”