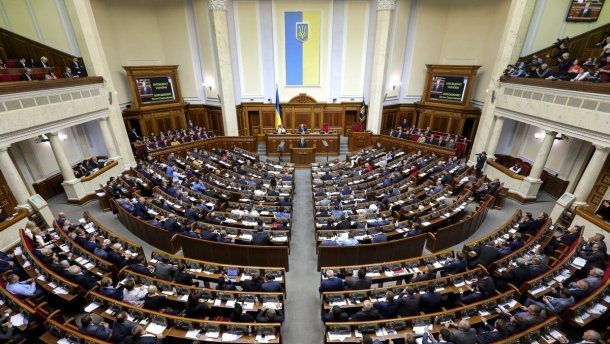 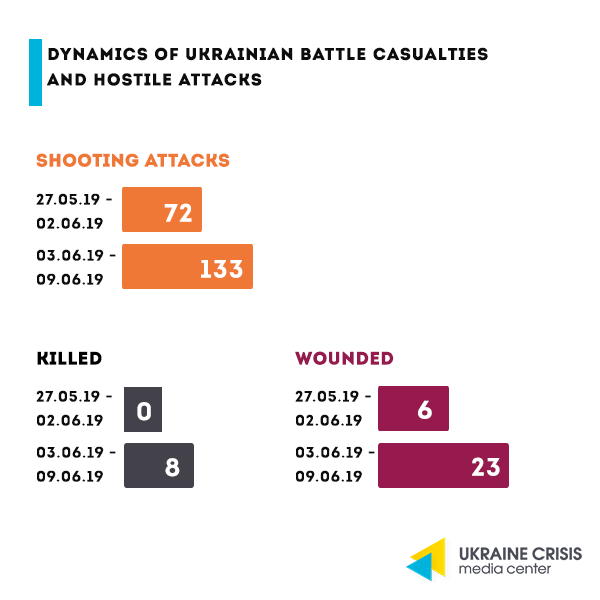 By the end of last week key political parties had already presented their lists and programs. Many civil society representatives entered the lists of different parties. 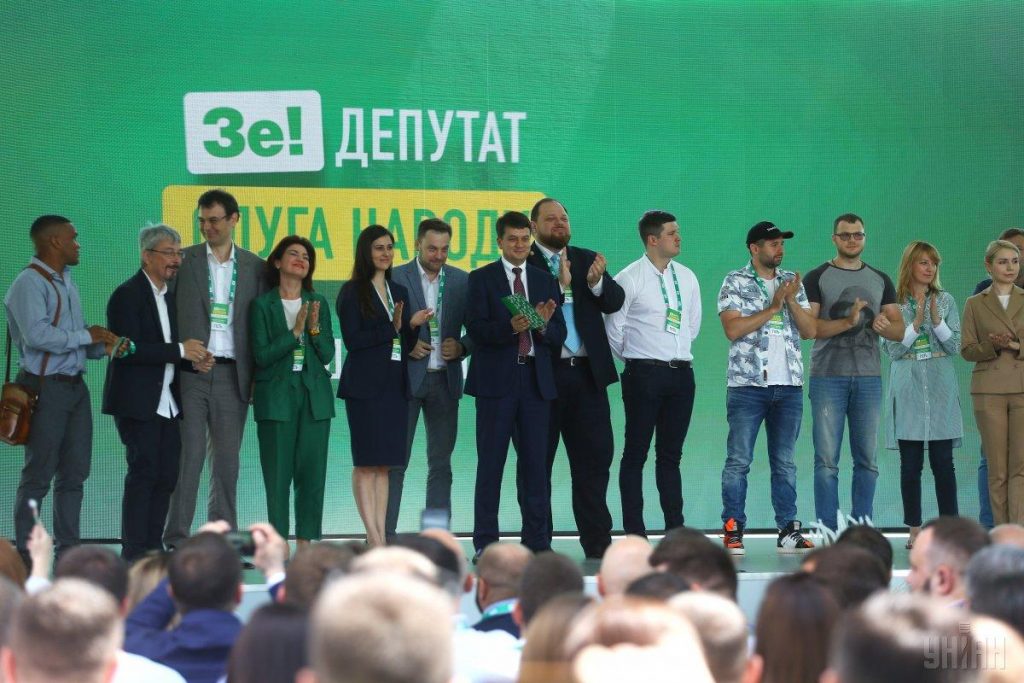 Servant of People. Volodymyr Zelenskyi’s “Servant of People” (SluhaNarodu) presented its list.On top of the list is Dmytro Razumkov, the party’s chief. Second is Volodymyr Zelenskyi’s representative in the Parliament Ruslan Stefanchuk, number three is Iryna Venediktova responsible for the judiciary reform within the team, as earlier reports said. Fourth in the list is entrepreneur Davyd Arakhamia, number five is Halyna Yanchenko, anticorruption expert. Number six is the head of digital communications at “Sluha Narodu” party Mykhailo Fedorov, seventh comes Oleksandr Kornienko, head of the party’s campaign office. Eighth in the list is Anastasia Krasnosilska, tax law expert, number nine is Oleksandr Tkachenko, director general at the “1+1” TV channel. Last in the top ten is Zhan Belenyuk, Greco-Roman wrestler. Dmytro Razumkov said his party “Servant of People” will present 199 candidates in single-member districts but the work on majoritarian list is still on. 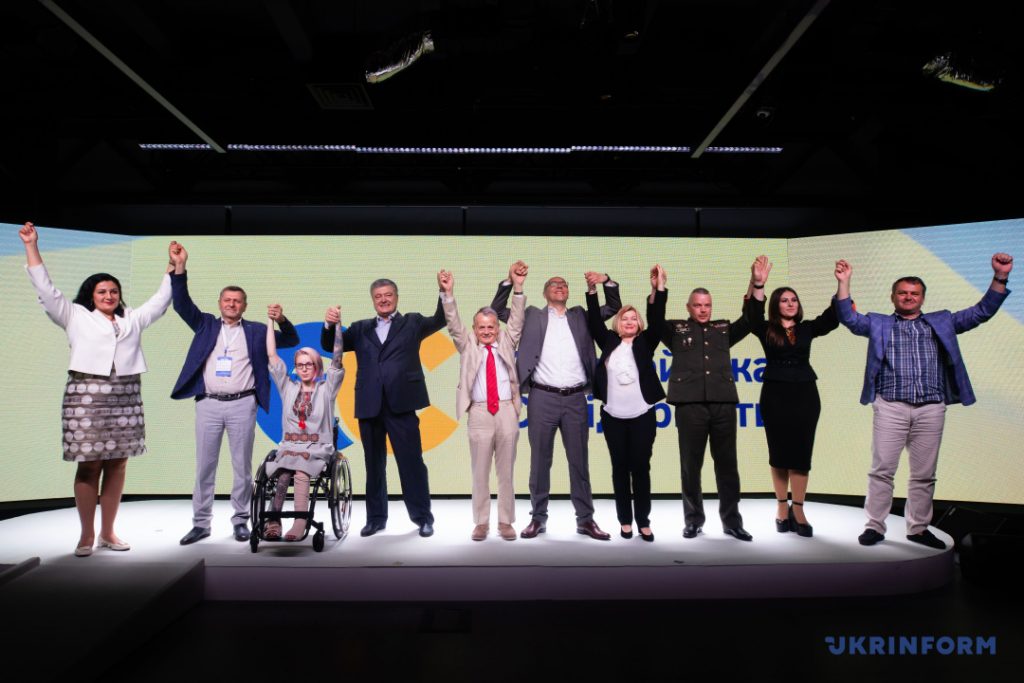 For the parliamentary elections the party of Ukraine’s former President Poroshenko changed its name. Its new name is “European Solidarity” (“Yevropeiska Solidarnist” abbreviated “ES” in Ukrainian that also stands for the “EU”). Petro Poroshenko said that “European Solidarity” runs for parliamentary seats in order not to let the revenge of pro-Russian forces happen. He emphasized that his team runs for Parliament “so that no one ever turns Ukraine back towards Russia, no one stops us halfway down the European Union and NATO, to make sure thatneither external forces nor the internal fifth column stop the flywheel of European and Euro-Atlantic integration that we started.” “European Solidarity’s” top three candidates are its party leader and former President Petro Poroshenko, Parliamentary Head Andriy Parubiy and Deputy Head of the Parliament Iryna Gerashchenko. Number four is Mykhailo Zabrotskyi, commander of the 95thair mobile brigade, fifth is Sofia Fedyna, foreign policy expert, journalist and singer, “the voice of Maidan in Lviv”, sixth is Mustafa Dzhemilev, Crimean Tatar leader. Number seven is Yana Zinkevych, commander of “Hospitaliery” medical battalion, eighth is Oleh Synyutka, former head of the Lviv regional state administration. Number nine in the list is Akhtem Chyigoz, deputy head of Mejlis of Crimean Tatar people, tenth is Ivanna Klympush-Tsintsadze, Deputy Prime Minister on European and Euroatlantic Integration. 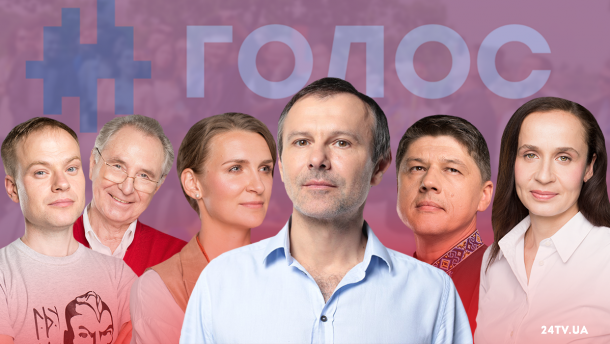 Sviatoslav Vakarchuk stated that in the new composition of the Parliament “Holos” (The Voice) party is ready to be part of the coalition with the parties that share their principles. Vakarchuk said that the party has no intention of joining efforts with political forces that disagree on Ukraine’s choice being Europe, defend oligarchs, do not support the “law is equal for everyone” principle and that do not want to make authorities accountable to people. The list of “Holos” is headed by Sviatoslav Vakarchuk followed by Yulia Klymenko, former Deputy Minister for Economic Development and Trade; Kira Rudyk, head of Ring Ukraine IT company; Yaroslav Zhelezhnyak, advisor to the Prime Minster on parliamentary relations and Oleksandra Ustynova, anticorruption activist.

PrivatBank against Kolomoyskyi: USD 470 billion laundered in the US 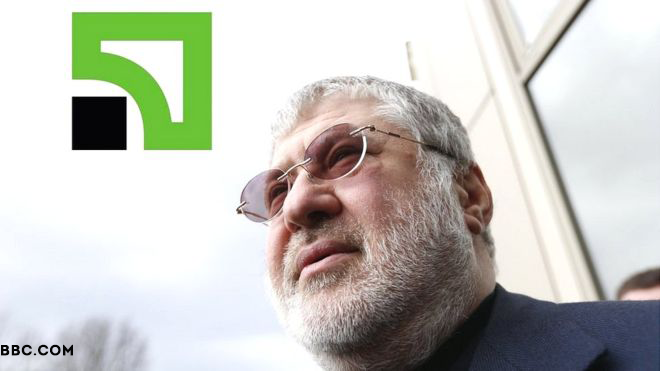 PrivatBank against Kolomoyskyi. On June 4 new details were released as to the claim filed by the nationalized Pryvatbank on May 21 to the Court of Chancery of the State of Delaware. The analytical center Atlantic Council published it.

The claim was filed by the state-owned bank against its former private owners – Ihor Kolomoyskyi and Hennadiy Boholyubov, the first one is thought to have close ties with the actual President Volodymyr Zelenskyi. Other defendants are three US citizens – residents in Miami and 19 anonymous companies.

What is the sum in question? The key detail of the claim is the amount of money involved: “From January  2006  through December  2016,  the total  movement  of funds (credits) into the UBOs’ Laundering Accounts at PrivatBank Cyprus was USD 470 billion,  which  amounts to  approximately  double the  Gross  Domestic Product  of  Cyprus during  the  same period.” (Page 78 of the claim).

If the amount is proved in court, it will be the biggest money laundering case made by one group.

The scheme was simple. The bank collected retail deposits in Ukraine by offering attractive conditions and good service. The money was then sent to PrivatBank’s subsidiary in Cyprus. In Cyprus the former owners used services of two local legal firms, the claim states. They worked with three Americans in Miami who helped create a large number of anonymous companies (LLC) in the United States located in the states of Delaware, Florida, New Jersey and Oregon.

The full text of the claim in English is available at the link.

On June 5 the Constitutional Court ruled that the authority of the National Anti-Corruption Bureau of Ukraine (NABU) to file claims for invalidation of agreementsis not in line with the Constitution. The claim was filed by the Zaporizhzhia Ferroalloy Plant controlled by the Privat group of Ihor Kolomoyskyi and Hennadiy Boholyubov. According to NABU, in the past four years of work of this agency courts issued positive decisions as to 35 claims and annulled 97 agreements. The decisions have come in force allowing to return over UAH six billion (USD 228 million) to the state budget. The agreements in question concern Ukrnafta, Zaporizhzhia Ferroalloy Plant, Dniprospetsstal (steel producer), Zaporizhzhia Titanium and Magnesium Plant, Ukrainian railways (Ukrzaliznytsia), Administration of sea ports etc. “The decision by the Constitutional Court makes it possible to restore many of these illegal agreements in court,” NABU emphasized.

Efficient tool taken off NABU. The decision by the Constitutional Court can be compared to revocation of the article of the Criminal Code on illicit enrichment that lifted liability from hundreds of corruptionists. The International Monetary Fund (IMF) as well as other international credit providers condemned the decision and demanded to restore the respective article in the Criminal Code. IMF holds it as one of the conditions for the provision of a future tranche. It is quite possible that the decision in question by the Constitutional Court will only worsen the relations with the IMF that are already suspended.

In this light Kolomoyskyi’s encouragement to default becomes logical. He does not need the IMF cooperation now. The Fund has condemned the de-nationalization of PrivatBank quite sharply.

Kolomoyskyi losing control over Zelenskyi? Theunbelievably quick consideration of the case by the Constitutional Court occurred after Zelenskyi made a statement in Brussels saying that “he has no interest in games that former Pryvatbank owners are holding in courts”. Media including the Financial Times concluded that with this statement “Zelenskyi renounced Kolomoyskyi.”

Refusal to discuss the possible default, continued cooperation with the IMF, open demarche on PrivatBank – it all creates the impression that Zelenskyi is moving away from Kolomoyskyi. The oligarch is now trying to quickly resolve at least some of the issues before Zelenskyi realizes how toxic they are.