The Russian Federation has been using different ways to influence domestic affairs of European countries, just as much to manipulate the Russian citizens. Russian state channels are flagship tools for both of those endeavours, regularly presenting its audience with disinformation and conspiracy theories. They use specific methods and techniques to twist the image of the West and manipulate their viewers.

In order to provide comprehensive evidence of such activities, the Ukraine Crisis Media Center in cooperation with the European Values Think-Tank prepared three videos, showing how the events of the attempted assassination of Sergei Skripal and his daughter in the United Kingdom and the shooting down of the MH17 airplane were distorted by the Russian channels.

“Research of narratives as a key element of disinformation system carefully constructed by Kremlin demonstrates there development and application both in space and time”, says Liubov Tsybulska Head of Hybrid Warfare Analytical Group.

Complimentary to the videos,  two infographic materials explain how the Russian narratives regarding the shooting down of the MH17 airplane evolved in time and which manipulative methods have been used during the coverage of the assassination attempt of Sergei Skripal. 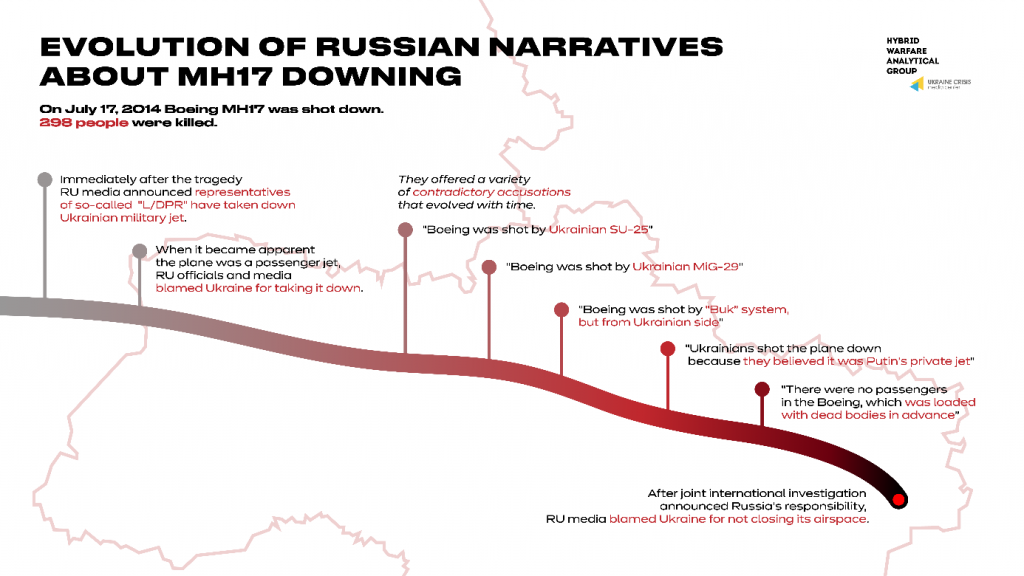 The primary goal of the produced materials is not only to be shared amongst wider public, but also to provide a better and more comprehensive idea about how the West is portrayed by Russian state channels to policy-makers and decision-makers.

“The necessary information about the Kremlin’s influence operations is already out there, but in other to bridge the gap towards specific measures to be taken against it, we need to provide the digested information to the people who are able to take those steps,” says Veronika Víchová, Analyst and Coordinator of the Kremlin Watch Program of the European Values Think-Tank.