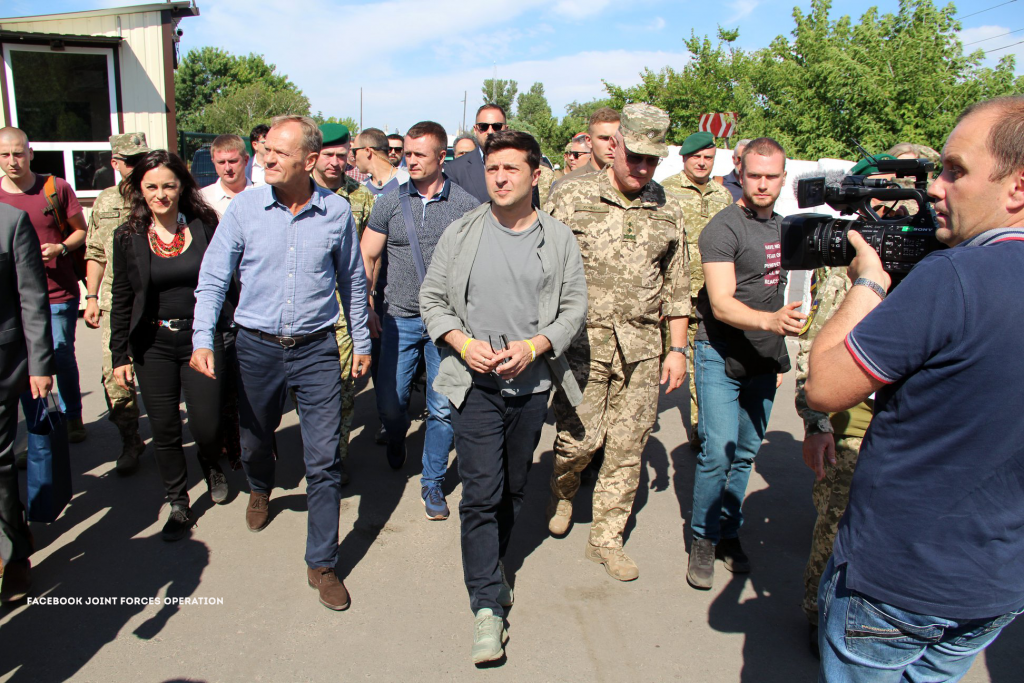 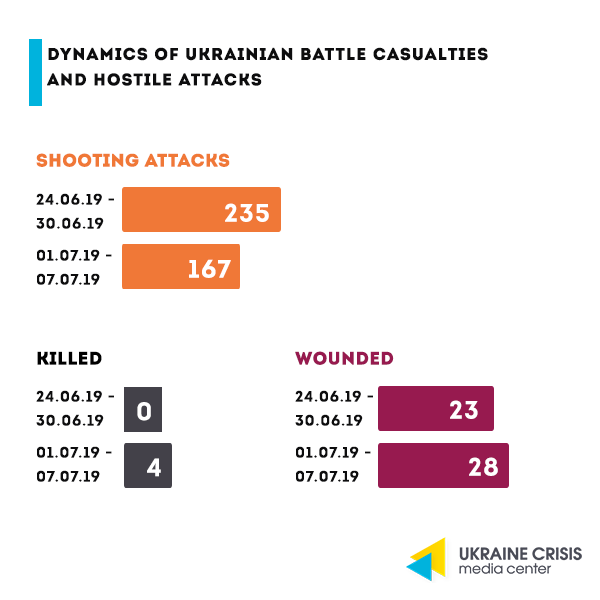 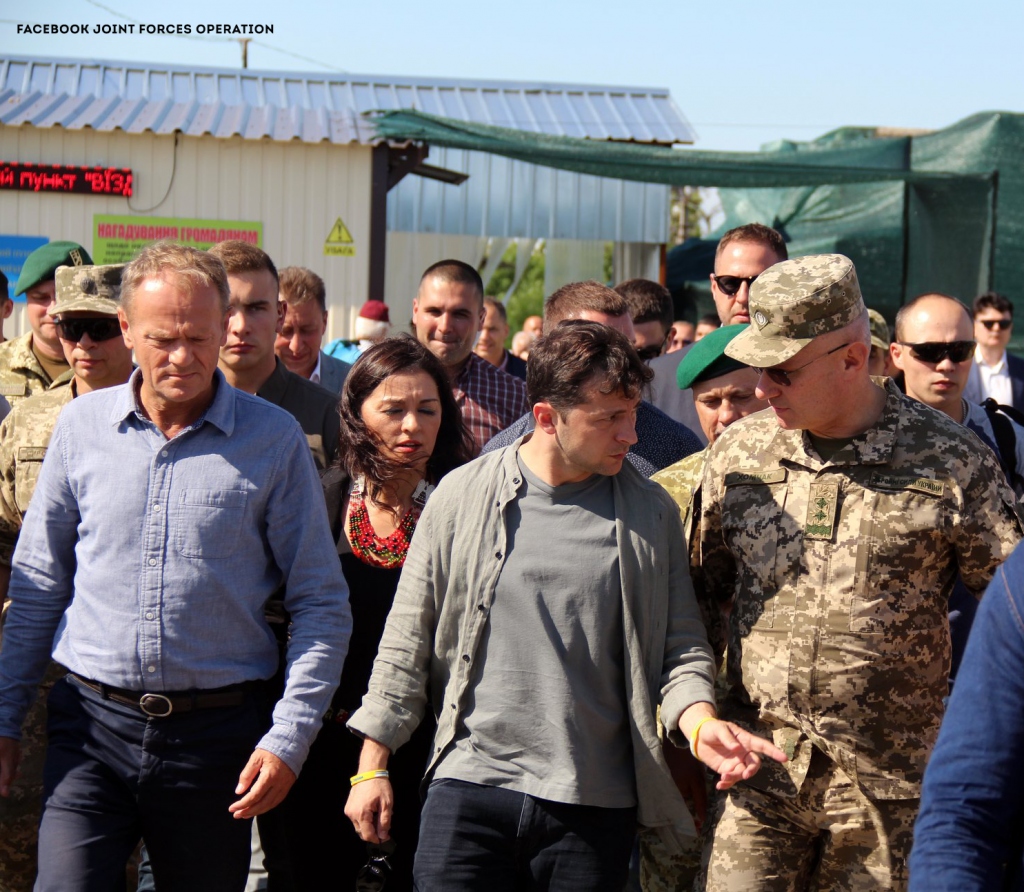 President of Ukraine Volodymyr Zelenskyi and President of the European Council Donald Tusk jointly visited the area for disengagement of troops and weapons in Stanytsia Luhanska, reported the press service of Ukraine’s Joint Forces on July 7.

“At ‘Stanytsia Luhanska’ control point Zelenskyi and Tusk were briefed about the current situation in the area. The President of Ukraine and the President of the European Council spoke to representatives of the OSCE Special Monitoring Mission and to local residents as well as were presented humanitarian projects implemented with the support of the EU,” the statement reads.

“The Supreme Commander-in-Chief personally checked new positions of the Joint Forces in the disengagement area. Honorable guests were also presented results of the work by mine action groups – proof of the Russian aggression including remnants of hostile ammunition discovered by firefighting units. The delegation had a chance to make sure that the Ukrainian side strictly complies with international agreements and adheres to the Minsk agreements,” the press center of the Joint Forces Operation proceeds.

President Zelenskyi’s press service stated that during his visit to Stanytsia Luhanska the head of the state “moved past zero checkpoints of the Ukrainian Armed Forces over half a kilometer deep into the disengagement area.” 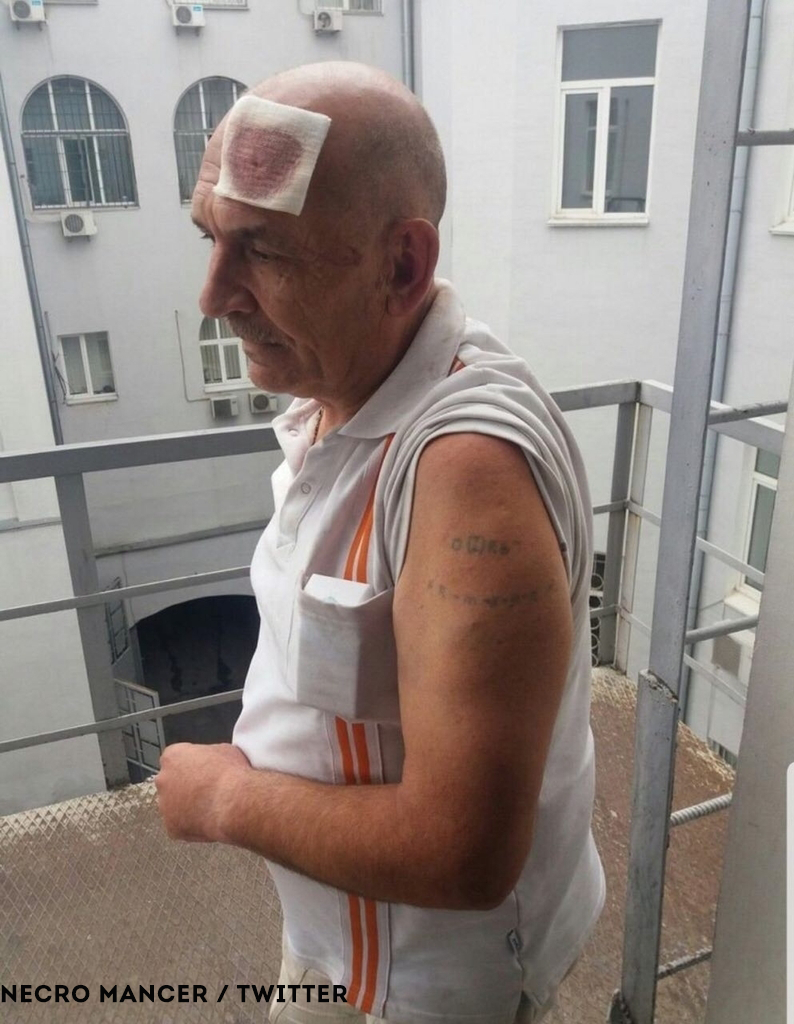 Ukraine’s Security Service detained the former counter-air defense chief of the “DPR’s” Slovyansk unit Volodymyr Tsemakh. He can possibly be an actor and an important witness in the case of MH17 downing. Volodymyr Tsemakh was the “anti-air warfare commander” of Snizhne starting from October 2014. The Malaysia Airlines Flight 17 was downed in proximity to the town on July 17, 2014.

The charges. According to media reports Tsemakh is currently held in custody in Kyiv as a suspect. He was charged with “creating a terrorist group or a terrorist organization” in accordance with the part 1 of the Article 258-3 of Ukraine’s Criminal Code. If Tsemakh is found guilty he might be sentenced to eight to fifteen years in prison. The court chose a two-month arrest ending in late August as a pretrial detention measure for him.

The course of the detention operation. According to the BBC News, Ukrainian special operations forces conducted the operation in the occupied area in late June. Tsemakh was detained far from the contact line in the occupied territory.

Volodymyr Tsemakh’s daughter Maria residing in the occupied territory confirmed the detention to the Russian service of BBC News. Tsemakh was detained in his apartment in Snizhne on June 27. He was then transported across the contact line to Ukraine’s government-controlled area.

Statements by family members. Maria Tsemakh told BBC News that she attributes her father’s detention to the fact that “he used to head the counter-air defense” in Snizhne in 2014.

“They will now try to pin the Boeing on him. He was listed the anti-air warfare commander from October 2014, it’s just that he was the only specialist like that,” she told BBC News.

“When the Boeing was downed he was not a key actor but an ordinary serviceman at the checkpoint,” Tsemakh’s daughter proceeds.

Official statements. Ukrainian state agencies are not commenting on the story. “It is a very complicated operation,” former head of the Main Investigation Directorate of the Security Service of Ukraine Vasyl Vovk told Radio “Novoe Vremya” (New Times). He also reminded that the person named by media has not been officially charged either by Ukrainian or by international investigation.

To remind, on June 19 Dutch prosecutors charged with murder four suspects in downing of the MH17 flight in Donbas. They are Russians Igor Girkin (Strelkov), Sergei Dubinsky, Oleg Pulatov and Ukraine citizen Leonid Kharchenko. International search and arrest warrants were issued for them. The trial in the MH17 case is to start in March 2020.

EU-Ukraine Summit in between political seasons 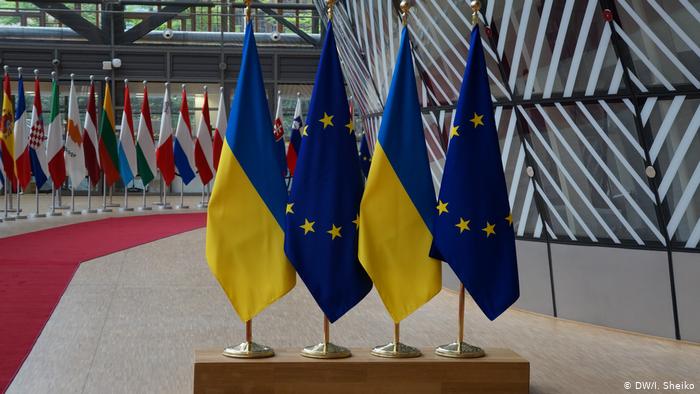 The European Union is holding a joint summit with Ukraine in times of political season change in order to reconfirm that the relations between Brussels and Kyiv continue regardless of whatever happens on the domestic political scene. “Interfax Ukraine” refers to the comment they’ve received from a high-ranking EU diplomat at a press briefing in Brussels ahead of the EU-Ukraine Summit on June 5 in response to the question on expedience of holding the summit in between the political seasons when terms in office of the President of the European Council Donald Tusk and of the President of the European Commission Jean-Claude Juncker are coming to a close, while in Ukraine early parliamentary elections are near and the new government will be then formed.