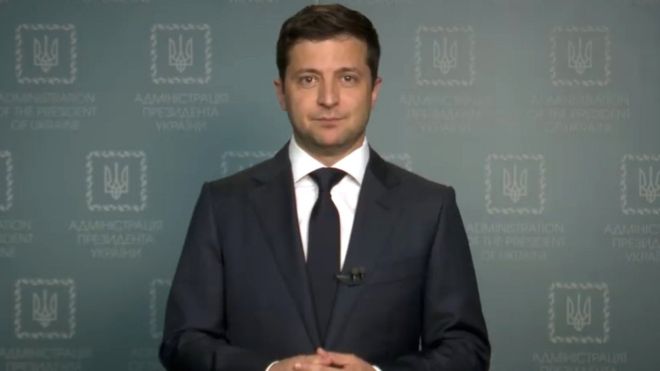 On July 11, 2019 President Zelenskyi made a sharp and vociferous statement that started a massive discussion in the Ukrainian society. He thus revealed his plans to amend the Law on cleansing of authorities and to include all public office holders between 2014 and 2019 into the list of officials subject to lustration. UCMC takes a look at what exactly Zelenskyi is suggesting, whether this scenario is realistic and what it tells us.

Volodymyr Zelenskyi released a video statement on Facebook: “I would like to share my pain. In less than two months in office, especially after my latest trips within the country, the only feeling I have is – I just lack descent words,” the President said.

According to Zelenskyi every day he talks to officials at different levels and gets to understand that it is a “hopeless diagnosis”. “White-and-blue, red-and-white, orange, burgundy or pink. They are actually all of the same kind. They don’t bother,” the President said.

“What for do we need the MPs who keep immunity, make illicit enrichment legal and simply skip work. What for do we need the ministers who say that Ukrainians eat too much, build roads on their Facebook and give birth to children in America; (the ministers) who put the last nail in the coffin of their nation’s health and talk about the harm of cherry stones,” he proceeded.

Zelenskyi said he is racking his brains every day trying to think of what to do with them: exchange for the prisoners or make them wear defective bulletproof vests that they procured and send them to the frontline. “I guess, the least we can now do is to take away from them the possibility of governing the state once and for all,” Zelenskyi said.

The President said that his team had drafted a law expanding provisions of the Law on cleansing of authorities.

Who will be subject to lustration as per Zelenskyi’s draft law and why?

In other words, all high level officials active between 2014 and 2019 can be potentially removed from office.

Zelenskyi’s video does not give an answer to the question “Why?” Instead he appeals to “people’s assessment of actions by old officials” and hopes that in future actions of the above persons “will be justly assessed legally”.

Exactly one week ago, on July 4, 2019 the initiative to lustrate all officials in office during Poroshenko’s presidency was voiced by the ex-head of President Yanukovych’s Administration Andriy Portnov. He said he had already drafted a respective law and will submit it to the Parliament of the next convocation.

To remind, after ex-President Yanukovych fled, Andriy Portnov left Ukraine. He came back when President Zelenskyi assumed office. In June 2019 the Rector of the Taras Shevchenko National University of Kyiv signed a decree appointing Portnov a professor to the department of constitutional law at the law faculty from September 1, 2019 to June 30, 2020. Massive student protests made him annul the appointment.

Portnov also succeeded to have the sanctions against him lifted. On March 5, 2014 the European Union froze for one year the assets of 18 former Ukrainian high-level officials suspected in illegal appropriation of public property. Portnov was among the sanctioned. A year after the EU excluded four persons including Portnov from the list of persons subject to restrictive measures.

It is now unclear whether Portnov’s draft law is concordant with that of Zelenskyi or whether the draft in question is one and the same that would mean that Zelenskyi’s team cooperates with an actor of Yanukovych regime.

Which lustration law is in force and why doesn’t it sit well with Zelenskyi’s team?

Subject to lustration were also earlier convicted civil servants and law enforcement personnel who cooperated with foreign security agencies, called for violation of Ukraine’s territorial integrity or allowed for violation of human rights and freedoms as defined by the European Court of Human Rights.

Apparently the actual lustration law does not appeal to Zelenskyi’s team. On May 21, 2019 President Zelenskyi appointed to the post of the Presidential Administration Head Andriy Bohdan, legal advisor and lawyer of oligarch Ihor Kolomoyskyi. By law Bohdan is subject to the Law on cleansing of authorities, while Zelenskyi’s team took the path of revising the law instead of revising the scandalous appointment.

Thus, on May 14 the Constitutional Court started considering if certain provisions of the lustration law are in line with the Constitution. One of the arguments of Zelenskyi’s team was the critical assessment of the actual Law on cleansing of authorities by the Venice Commission.

Will Zelenskyi’s team lustrate itself?

President’s Envoy to the Parliament Ruslan Stefanchuk responded that it is to be discussed after the Verkhovna Rada (Ukraine’s Parliament) will get the draft law in question. “I am deeply convinced that in case we get the support, we will absolutely comply with all the provisions of the law in force,” Stefanchuk added.

“We don’t concern ourselves with whether they are in the President’s team or not. In case the law is passed, it will apply to all who are subject to the provisions of the law,” President’s envoy said.

Ten days ahead of the parliamentary elections it is unclear whether Zelenskyi’s draft law has chances of being voted in by the future Parliament. Latest opinion polls say 48 per cent of voters are ready to cast their votes for Zelenskyi’s “Sluha Narodu” (Servant of People) party. Most likely the President’s party will require a coalition with other political forces that would support the idea of total lustration.

Among the parties that have chances to enter the next Parliament, the idea can be only supported by the “Opposition Platform – For Life” (Opozytsiyna Platforma – Za Zhyttia).