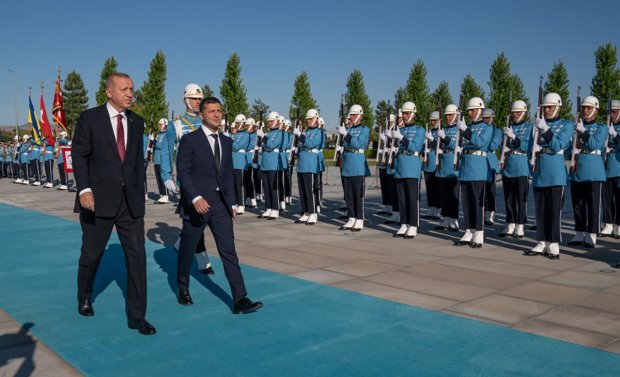 The President of Ukraine Volodymyr Zelenskyi made his first official visit to Turkey. In Ankara he met with the President of Turkey Recep Tayyip Erdoğan and with the Ecumenical Patriarch Bartholomew. UCMC takes a look at the statements and main meeting results. 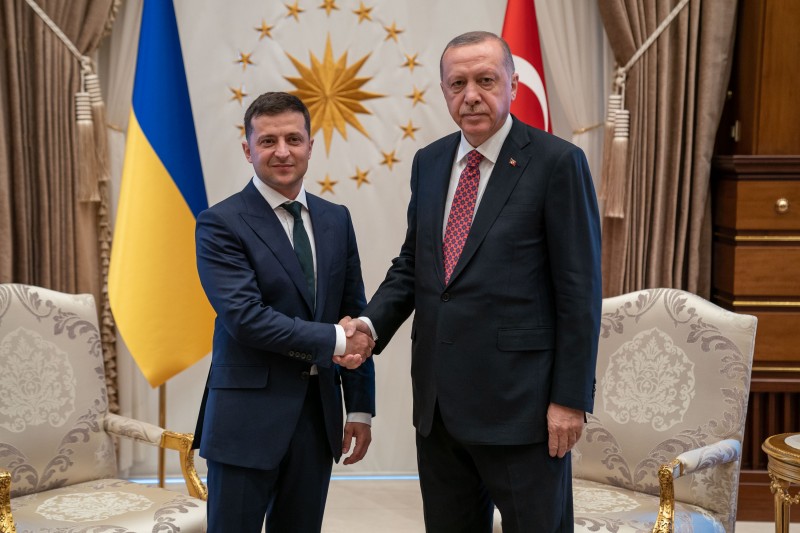 At the press briefing Recep Erdoğan expressed his condolences on the death of Ukrainian servicemen in Donbas the day before and called Volodymyr Zelenskyi a friend.

Head of the Ukrainian state said he would like the trade balance between the countries increase, he also invited Turkish businesses to come and work to Ukraine.

Answering the journalists’ questions on how to return Crimea, Zelenskyi called not to lift sanctions on Russia, bring the issue to the table in each and every country in the world, remember about Ukrainian sailors and political prisoners held captive by Russia.

He said what helps him keep in mind the captured Ukrainian sailors is bracelets with their names – a gift from sailors’ parents, that he is wearing. 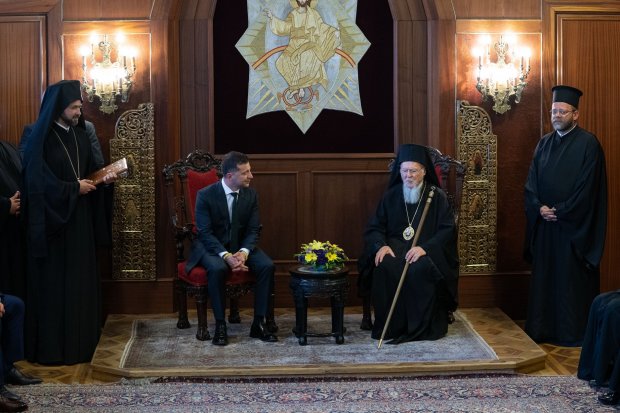 Meeting with the Patriarch. During his first official visit to Turkey President Zelenskyi met with the Ecumenical Patriarch Bartholomew. Earlier this year Patriarch Bartholomew granted Tomos on autocephaly to Ukraine’s united Orthodox Church. The parties did not sign the joint statement that they planned earlier.

According to BBC News Ukraine, the meeting with the Patriarch happened at the initiative of President Zelenskyi. He met with Patriarch Bartholomew at his residence both in the inner circle and with delegation members but journalists. The President and the Patriarch also had a gala luncheon that lasted over an hour. Nevertheless before the meeting a misunderstanding happened between the representatives of Constantinople and President Zelenskyi’s Office.

Thus, it was initially planned that the Patriarch and the President of Ukraine will sign a joint statement. Sources in Kyiv and in Istanbul quoted by BBC News Ukraine confirmed that the document was planned to be signed. However at the last minute the parties failed to agree and according to the sources the President’s team refused to sign the document prepared in Fener in cooperation with the Foreign Affairs Ministry.

According to the source, the joint statement was supposed to concern environment, as Bartholomew is well-known for his activities in the area, he is often unofficially called the “green Patriarch”.

The Office of President refused to answer BBC News Ukraine why the joint statement was not signed. They shortly came up with a brief release that says Bartholomew supported Ukraine’s sovereignty and Zelenskyi thanked him for his support.

Zelesnkyi and Tomos. Some experts earlier voiced concerns that Zelenskyi’s attitude to the Ecumenical Patriarch and to the autocephalous church will be quite cold.

Given that one of the main drivers for establishing of Ukraine’s independent Orthodox Church was the former President of Ukraine Petro Poroshenko. He used to be a frequent guest in Bartholomew’s residence and his name is even mentioned in Tomos.

In his holiday show in early January 2019 before the Tomos was to be received, Zelenskyi was joking harshly about it. He also ridiculed Petro Poroshenko who worked for the autocephaly to be granted emphasizing it in his election campaign.

Ahead of the presidential elections Volodymyr Zelenskyi spoke positively about the prospects of autocephaly and granting of Tomos.

During the election debates with Petro Poroshenko Volodymyr Zelesnkyi also supported the Ukrainian Orthodox Church but gave credit for its setup not to Poroshenko but to the Patriarch Filaret.

After Zelesnkyi won the presidential elections the head of the Ukrainian Orthodox Church Metropolitan Epiphanius refused to appear in the President’s video address to church representatives and residents of Donbas.

The hierarch did not like the text that he was suggested to voice in the video: “one should speak not in the language of cannons”. Epiphanius was concerned that it might look like he is calling to negotiate with militant leaders. In the end this part of the text was voiced by the head of the Moscow Patriarchate Ukrainian Orthodox Church Onufriy.