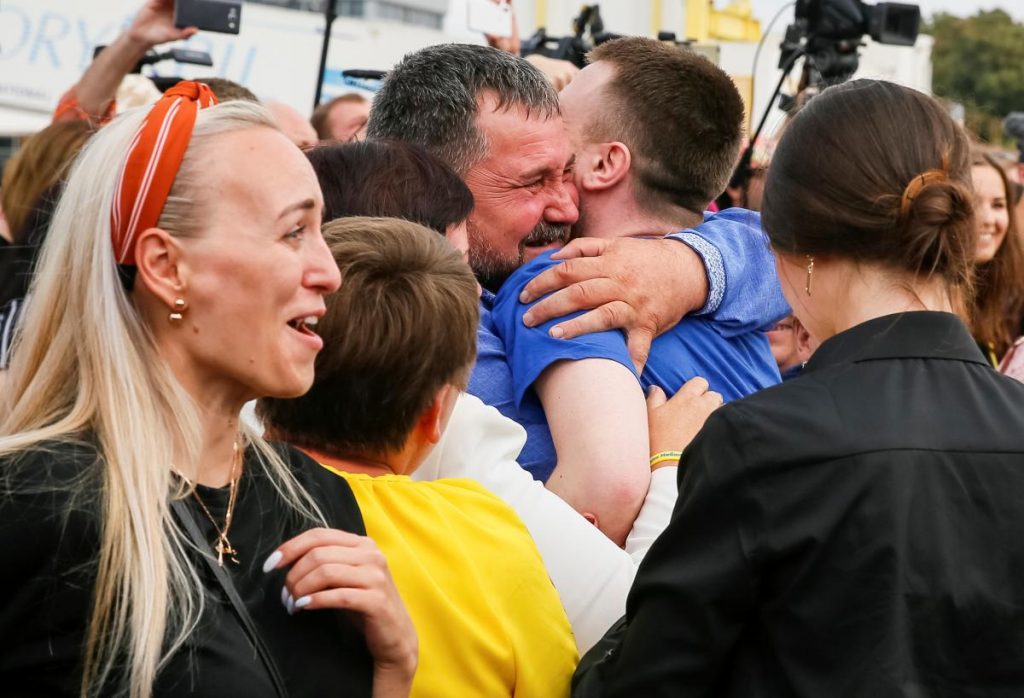 On September 7, 2019 thirty five Ukrainian political prisoners came back to Ukraine from Russia. In the first two weeks many of them gave their first press conferences or interviews. One of them was a joint press conference by Oleg Sentsov and Oleksandr Kolchenko that got wide coverage. Liberated sailors, Volodymyr Balukh, Roman Sushchenko and others also spoke in front of the press. UCMC was following these events. We’ve collected quotes by former prisoners of Kremlin casting light on penitentiary in the Russian Federation, moods in the Russian society and what the Ukrainian prisoners went through.

“Packed like cattle to transport,” – Sentsov on prison transit 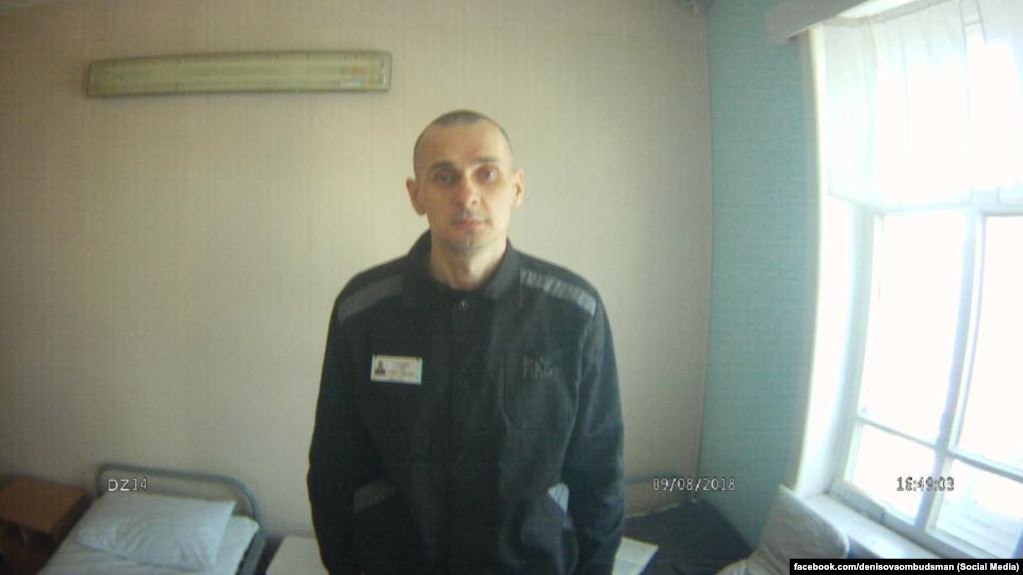 Journalists counted that while transported between prisons Sentsov and Kolchenko jointly covered about 20 thousand kilometers – the distance equal to half of the way around the Earth. During the first interview that Sentsov gave after the liberation journalists of Hromadske TV asked him if he was provided with an explanation why he was frequently transported from prison to prison, each time further from the capital. “No one explained anything to me. You have to understand that no one talks to you there. You are not taken for a human being, they explain nothing to you. They pack you like cattle and transport – that’s it,” Sentsov said.

Tortures as a revenge – Volodymyr Balukh

Crimean activist Volodymyr Balukh, one of the liberated prisoners of the Kremlin, while in prison was subject to constant physical violence starting from the first days in custody. Most violent torturethat he suffered occurred after he was brought to the Torzhok penal colony in the Russian Federation, Volodymyr said during his first press conference held at Ukraine Crisis Media Center.

A video was played during the conference in which Balukh, prisoner at the time, speaks about the violence he suffered in the colony. He said it took place on March 15, 2019.

“These were tortures and threats of sexual abuse. (They) beat (me), put a pillowcase on my head, poured water (over me),used stun guns, beat (me) on my heels and legs. They would douse a pillowcase and beat me on ears. (…) When it happens, it is difficult to do the time count. I guess it lasted at least 20 minutes, may be half an hour. I was hit with stun gun about 150 times, mainly from the behind, on the back and legs,” Volodymyr Balukh said.

In the room there was him, another detainee and five to ten law enforcement officers. He was standing facing the wall all the time, stretched into splits, so he cannot see who was beating him.

Before and after the torture a medic came in. After the beating he was suggesting to treat the injuries, control blood pressure and body temperature. “Because it [the torture] was happening with his silent consent, I refused any medical assistance or examination,” Balukh said.

“I would like to emphasize that these tortures took place not at the investigation stage, when they try to force a person into confessing to what they did not do. They probably come from a sadist desire for some kind of revenge, to abuse a person that went against the system. It was happening after the illegal sentence already came into force,” said Olha Skrypnik, coordinator at the Crimean Human Rights Group.

Sentsov about the pressure on family members: “Russian television kills”

Answering the journalists’ questions if the prosecution was trying to put pressure on him through his family members in the occupied Crimea, Sentsov said: “No, thanks God, there was no (such) pressure on me. This was where they at least respected the standards, meaning that they are fighting against me and are not fighting against my children, this is normal. You cannot fight against children. There is no such pressure.”

At the same time the former prisoner of the Kremlin said that such risks for families of political prisoners are quite real. “People who have relatives staying in Crimea are under high risk. One thing is official authorities that will not do it (…). While no one is protected from the scenario when some reckless vatnik (a follower of Kremlin’s propaganda – UCMC) encouraged by television decides to take revenge on them. Russian television really kills,” Sentsov told Hromadske.

Sentsov about Russia as a country of indifferent

“My civic wake-up did not start at my birth, not even when I turned 18 or 20, it happened much later when I was already mature, closer to the middle age. I started feeling myself as a citizen responsible for my country,” Sentsov said.

“It is not like when the country is on its own and me on my own, as many now live. I don’t know what the percentage is in Ukraine, but in Russia 80 per cent live like this – on their own and the state is on its own too. (In Ukraine) we have been long living together with the state, we are in a certain relationship. It is not very good but we are trying to improve the state,” he added.

How Russians see the “brotherly war” against Ukraine

Oleg Sentsov also answered the question on how Russian citizens perceive the war of the Russian Federation against Ukraine. “The majority sees it the way propaganda shows it to them. They take it all for the truth. Maybe not 80 but 70 per cent do. The sample (of respondents) was specific (in jail – UCMC), but still these were also people who believe in what they are being shown,” Sentsov told Hromadske.

“They do not quite trust Putin in his domestic policy, they understand that much is being stolen and that he heads this mafia, roughly speaking. Foreign policy they do support though. Hatred, even contempt towards Ukraine, Europe and America is very strong. It is being incited every minute. It is felt on any TV channel throughout these five years. People absorbed it, they do not perceive it differently,” he added.

Roman Sushchenko on fear of torture and psychological pressure: “my whole life flashed before my eyes” 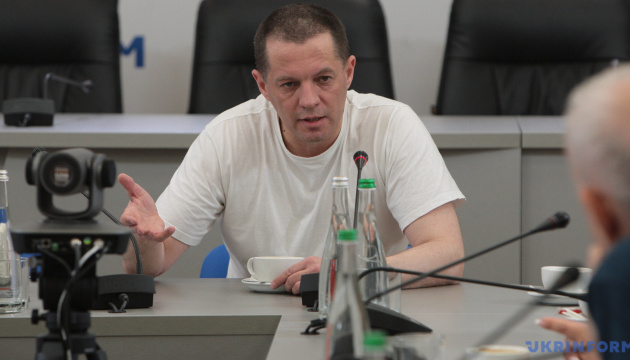 Ukrinform journalist Roman Sushchenko spent almost three years in prison. He was arrested while he was visiting his relatives in Moscow.

“Yes, 1,070 days. There were a few most difficult ones. Of course one of them was the first day when it happened all of a sudden and the stress was huge, when I realized that that was it. I was afraid because my pain threshold is not high, so my biggest fear was that I won’t make it when they start physical pressure,” Sushchenko said at his first press conference after the liberation held at Ukrinform.

“As to a person from humanities, as to a journalist, it was a huge shock. When I was captured and what happened next, a stinky bag on my head. (…) When they twisted me with handcuffs so that I could not move, they hurt a tendon in my arm, when one of them grabbed my Adam’s apple while others were searching me, they checked the neckband on my shirt: ‘Where is your poison capsule? Have you got weapons or not?’ I was shocked: what poison, what weapons? I asked when still on their bus: is it meant to intimidate or humiliate? I got no answer,” Sushchenko remembers.

“My whole life then flashed before my eyes. Besides I knew that the war is on, people are dying, I knew how those in captivity are treated. I was preparing myself: captivity ‘in basements’ will now start, torture, then ‘confession’ recorded on camera, electrical wires and rest of horrors. (…) I started realizing what will happen to me and I did become scared as anyone would,” the journalist said.

Roman Sushchenko on treatment of prisoners in Russia

Roman Sushchenko also recalled the episodes that produced the strongest impression on him in jail. They are illustrative of prisoners’ treatment in the Russian Federation. “A suicide happened in Lefortovo. There was a prisoner convicted based on the article on drugs in the cell opposite mine. In the evening when the guards were collecting garbage and our food delivery window was open, we heard a scream: he hanged himself. My strongest impression did not come from the death itself but from the fact that his body was taken away in the same tray that they used to bring us food in,” the journalist said at the press conference.

“When transported (to the colony)in a Stolypin railroad car they packed us in like herring into a can for 28 hours and the colony in Kirovsk (…). Before us a group of prisoners was escorted from another Stolypin car, they were the ‘striped’ ones – meaning they were prisoners who committed many different crimes and they were under a special regime. They were the first to be taken inside. They shouted at them as if they were not humans, the attitude was like that. It was all unfolding before our eyes, psychological pressure of a kind. What struck me most is the look of these people. They could be hardly called human beings – they were pale, their eyes filled with terror, without knowing what they did I felt in what conditions they were held,” he added.

Sushchenko: “back from hell”

Roman Sushchenko also spoke about his experience in the first days after he was liberated. “I have not yet fully realized what happened. I keep waking up at 5 in the morning – like in prison in Utrobino. My body and my biological clock work like they did there, gastric juices are produced in the same hours. At 9 I have my eyes closing, and my perceptiveness is a bit slow (…). Honestly saying I was trying to smile and to hug people, but I don’t feel it was sincere, I feel somefatigue as if I had burned out at work. You look at people, at your acquaintances, remember their names but feel some sadness, some emptiness and it has not been yet filled,” Sushchenko said.