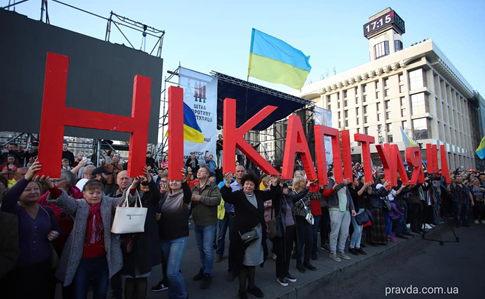 On Monday, October 14 the country marked Ukraine’s Defenders Day that is on calendar for the fifth year in a row. The holiday was established as the former “Soviet” Day of Fatherland Defenders was suspended. Ukraine’s Defenders Day is observed since 2015. The holiday falls on the same day as the Ukrainian Cossacks Day, the Day of establishment of the Ukrainian Insurgent Army (UPA) and theFeast of the Mother of God Pokrova. October 14 is the national holiday of servicemen and servicewomen, a day when political parties and civil society organizations hold marches. One of them was a nationalist march that came in the spotlight of international media that saw the events unfolding in Kyiv from the angle of far-right forces rallying.

UCMC looks at why this label is not quite correct and what the faces of the protests are.

Ukraine’s Defenders Day is marked for five years in a row now, yet it is the first time it coincides with the time when protest moods in the society mount. This year in addition to traditional slogans, new demands to authorities were voiced in the streets pronounced not only by the “right” or “far-right”.

On Ukraine’s Defenders Day the country’s capital and several more cities were flooded with the next round of “No to Capitulation” protests. In course of the previous rally on October 6 over 10 thousand people took to the streets in Kyiv. Same demands “not to give up Ukraine’s interests” got people together on October 14 again. According to the popular count as well as to journalists’ observations participants were tens of thousands. Police said 12 thousand people took part in the “No to Capitulation” rally and six thousand rallied in the nationalist march.

Participants of the rallies say they protested against “any attempts undertaken by the authorities to adopt the decisions that will lead to the defeat in the war with Russia including the ‘Steinmeier formula’, ‘special status for Donbas’ and ‘disengagement of troops’.”

Nationalist march: who were the participants and what do they want?

At 13:00 participants of the UPA march “Let’s Protect the Ukrainian Land” started gathering by the Taras Shevchenko monument in Kyiv. The column started to Bankova street (where the Office of the President is located) at about 14:40, it then reached Maidan. The far-right organizations that participated in it included the “National Corps” (Natsionalnyi Korpus) and its leader Andriy Biletskyi, “Svoboda” (Freedom) party and its leader Oleh Tiahnybok, “Natsionalni Druzhyny” (National Militia Units), Dmytro Yarosh’s volunteer combat unit “Ukrainska Dobrovolcha Armiya” (Ukraine’s Volunteer Army) and several representatives of “C14”.

Far-right organizations marched predictably loudly, were lighting flares, threw stun grenades and were carrying placards bearing Stepan Bandera’s name. Nevertheless police has not recorded serious violations. Main idea of this year’s march was to not let the authorities give up Ukraine’s national interests by agreeing to the “Steinmeier formula” or disengaging the troops. Roman Chernyshov, spokesperson of the “National Corps” commenting to “Ukrainska Pravda” said: “What is happening now is a real threat to the country. Should the disengagement of troops take place, we will soon be unable to fight along the entire contact line. The military are on our side. People in trenches understand the situation. If we don’t keep Zolote, it will be a real capitulation.”

At the same time representatives of far-right parties and organizations have a very negative attitude to the ex-President Petro Poroshenko. Authorities think he is fueling the protest spirit. “Flags distinguishing the parties are not important at these rallies. All Poroshenko’s attempts to monopolize the protest and present himself as its leader failed. Poroshenko on stage in Maidan is pathetic. We despise him as politician for everything he has done. Since the very beginning the Minsk agreements have been a big damage and capitulation,” “National Corps” spokesperson told “Ukrainska Pravda”.

Journalists note the proximity of Interior Minister Arsen Avakov to nationalist organizations “National Corps” and “Natsionalni Druzhyny”. Thus, representatives of the “National Corps” organized rallies in the past derailing public addresses of the former President Poroshenko across Ukraine. Avakov was blamed for using nationalist organizations in his political fight. Avakov is one of the two ministers who preserved their seats in the new government.

Protest organizers call the Viche (popular assembly, rally) of October 14 a civil society event, same as that of October 6. They also called on the participants not to use the event for the sake of promoting their political interests. At the same time many civil society activists – signatories of the appeal by the “Resist Capitulation Movement” to President Zelenskyi openly support former President Poroshenko.

Political opposition: “European Solidarity”, “Holos” and “Batkivshyna”. Same as “European Solidarity” party fellow colleagues from “Holos” (Voice) and “Batkivshyna” (Fatherland) parties said they disagree with the authorities. The three opposition forces addressed President Zelenskyi asking him to explain his plan of Donbas de-occupation. Yulia Tymoshenko called the “Steinmeier formula” unacceptable but her party did not get to the streets.

“Holos” not only made an address in the Parliament about the “Putin-Steinmeier formula” but also joined the protests in Kyiv and Lviv. “Ukrainians need to know the edge of the compromise that the President and the ruling party ‘Servant of the People’ consider acceptable. We heard general mottos about the President doing his utmost for peace, but we did not hear what price he is ready to pay for that,” MP Inna Sovsun from “Holos” commented on the party’s position.

Among other participants of the rally there were representatives of “Demokratychna Sokyra” (Democratic Axe) political force that has no representation in the Parliament and is often called a liberal wing of Poroshenko’s supporters. The party’s official position was “not to support either of the candidates for President” but they were straightforward about their negative attitude to Zelenskyi.

“It is not a political structure, it is a structure that thinks in national not party categories. Itiswhereitsforcelies. (…) If this movement is supported by political forces that has national interest on top – please, welcome, no questions. It does not mean that we shall see a dozen of party flags and so on yet again,” diplomat Volodymyr Ohryzko, former Foreign Affairs Minister in Yulia Tymoshenko’s government commented on the nature of the protest.

War veterans. What’s most important is the march was attended by war veterans. Combat veterans participating in the rallies have different political views. Many of them took part in the Revolution of Dignity and were among the first to go and fight on the frontline in volunteer battalions.

Hlib Babych, a combat veteran, commander of the 10thmountain assault brigade commented on him participating in the rally: “I am not on the frontline right now due to my health state. I devoted five years to the fight for Ukraine. These are six rotations. To me the country is important. Hundreds of veterans, of the people who did risk their lives for the freedom of their country join these protests (…) Not a single veteran went to fight for Poroshenko, they fought for Ukraine. We now also protest for our country. There are no concrete individuals to the benefit of whom it is being done.”

Civil society. Intellectuals and actors in culture were faces of Ukrainian protests in different times. They joined the street protests and supported the protesters.

This time “No to Capitulation” demands were also signed by education and literature actors, musicians and scientists. They include Viacheslav Briukhovetskyi, honorary president of the National University of Kyiv-Mohyla Academy, hero of Ukraine; Josef Zissels, dissident, executive vice president of the Congress of National Communities of Ukraine; Serhiy Kvit, professor at the National University of Kyiv-Mohyla Academy and former Minister of Education. These signatories include both supporters and opponents of Poroshenko.

Protests unite totally different individuals. Some of them exercise their political ambitions, while others cannot stand aside as life-changing developments in the country are unfolding.