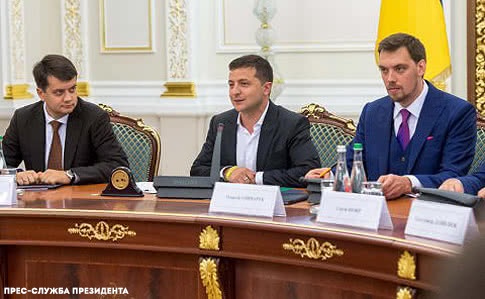 After several months when Ukrainians’ trust in the President was high and stable, Volodymyr Zelenskyi’s approval rating was shaken in mid-October for the first time. According to opinion polls held on October 9-11, 2019, the presidential approval rating dropped by seven per cent at once.

Along with the presidential approval rating, those of the Prime Minister Oleksiy Honcharenko and of the Head of the Parliament Dmytro Razumkov started declining as well.

How dramatic is the slump in Zelenskyi’s approval rating? Is it going to grow? What are the actual reasons behind it? UCMC collects explanations by sociologists and political experts to shed light on the phenomenon.

Key figures. According to most recent opinion polls held earlier this month, President

Zelenskyi’s approval ratingis at 66 per cent. Volodymyr Zelenskyi won the second round of the presidential elections on April 21, 2019 supported by 73,22 per cent of voters. The support stood unchanged for months.

According to the Kyiv International Institute of Sociology (KMIS) in October President Zelenskyi’s approval rating dropped to 66 per cent from 73 per cent in September.

Interestingly 38 per cent of Ukrainians do not know who Oleksiy Honcharuk is. Razumkov could not be identified by 36 per cent of respondents.

Is seven percent a tumble? The drop in the presidential approval does not look drastic now but it sends an important signal. “It is a considerable drop while in terms of percentage it’s not that big. At the moment it is not yet clear if it represents a trend or whether it is a temporary divergence,” explains sociologist, director general at KMIS Volodymyr Paniotto.

Experts predicted the drop in the presidential approval rating as high ratings do not last long.

Experts forecasted that Zelenskyi’s approval rating would start going down as soon as he begins to talk. Yet it is now clear that it is not dropping at a pace forecasted by political experts and sociologists. The actual drop is lower than that expected.

What caused the drop in the presidential approval rating? Sociologists say that Zelenskyi’s approval rating took a tumble chiefly because of the protests in Maidan against the “Steinmeier formula”. Massive protests against the peace deal on Russia’s terms took place on October 6 and October 14.

Another reason for the approval rating drop is the fatigue of waiting for the election-time promises to be implemented.

“Drop in the approval rankings of the three chief state officials is the disenchantment of citizens who blindly believed in quick and visible changes,” Iryna Bekeshkina, director at the Ilko Kucheriv Democratic Initiatives Foundation commented to the Radio NV (Novoye Vremia, New Times).

“People are tired or start growing tired of waiting for any particular results in the matters that the candidate for President and later President Zelenskyi promised to resolve, with peace being the top matter,” said political expert Mykhailo Pohrebynskyi. Same applies to combatting corruption or economic growth.

“If the issue with the Steinmeier formula keeps developing, the attitude to Zelenskyi may get worse. Ahead is the heating season and gas bills – it may also play its part. It usually makes a huge impact,” sociologist, general director at KMIS Volodymyr Paniotto said.

Presidential approval rating will definitely drop also because he’ll have a hard time pleasing all his voters who have different political views. “The approval rating will be definitely dropping, because it was sky-high from the very beginning. He united voters who have different views, so everything he will be doing will make part of his voters turn back on him,” forecasts Iryna Bekeshkina, director at the Ilko Kucheriv Democratic Initiatives Foundation.

One should not forget about political opposition either. “(These are) political forces that cannot work with Zelenskyi’s team today, because they are actually not let to. Nearly all political forces in Ukraine have teamed up into a powerful vanguard opposing the ‘Servant of the People’ and Zelenskyi. Naturally they work to weaken his image. (…) These processes are absolutely logical, while it turned out that Zelenskyi is not ready for them,” Klochok said.

Expert also said that the Parliament’s working pace is slowing down and disputes start happening within the faction. He thus does not rule out that the approval rating will have dropped twofold by mid next year.