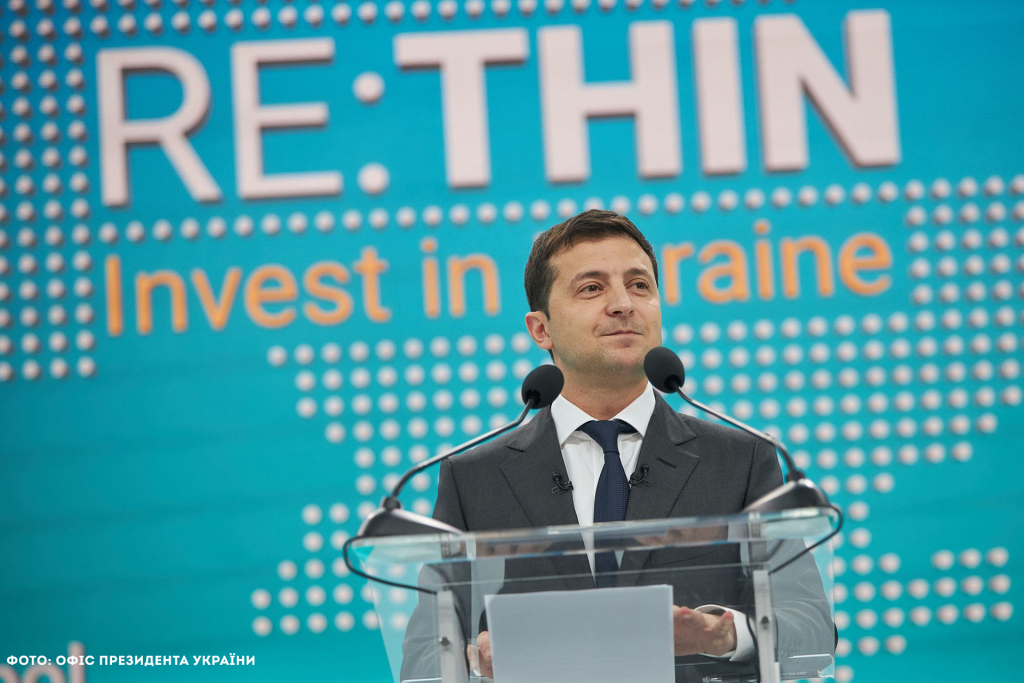 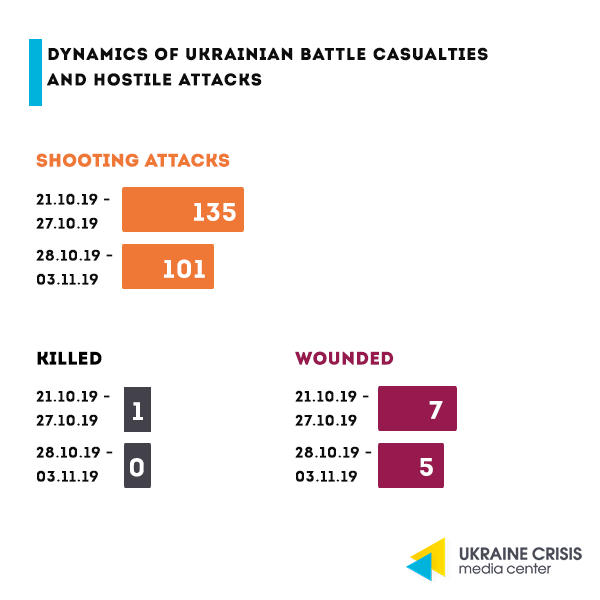 On Friday, November 1, near Zolote-4 town in Luhansk region a synchronized disengagement of troops and weapons conducted with a “mirror” approach was completed.

Joint Forces reported: “The stage where both sides disengaged their troops and weapons (in a ‘mirror’ manner) on the site no.2 near Zolote-4 town in Luhansk region is completed. Representatives of OSCE SMM have verified the moves we made, also using unmanned aerial vehicles.” 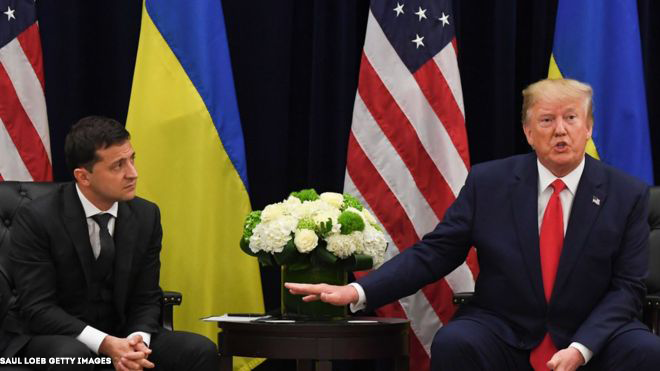 Trump and the White House meeting. US President Donald Trump said that he would like to meet with the Ukrainian President Volodymyr Zelenskyi in Washington. “I would love to have him come to the White House if he’d like to come, and I think he’d like to come,” the President said answering the journalist’s question if he intends to invite Zelenskyi to come to Washington. Trump added: “I think he’d be here very quickly.” “He’s a good man.  He was elected on the basis of corruption. Corruption is incredible in Ukraine, which bothered me a lot,” the US President said. Earlier this autumn a political scandal broke around a phone call between Trump and Zelenskyi. Media referring to the whistleblower were saying that Trump had allegedly pressured Zelenskyi to start the investigation into Ukraine activities by Hunter Biden – the son of Joe Biden, a Democratic Party’s candidate for President.

Ukraine and NATO. Vice Prime Minister on European and Euro-Atlantic Integration of Ukraine Dmytro Kuleba said that Ukraine had addressed NATO asking to join the Enhanced Opportunities Partner program. “During the visit Ukraine addressed the North Atlantic Alliance asking to get to a new cooperation level and grant Ukraine the status of an Enhanced Opportunities Partner program participant,” Kuleba said at a press briefing in Kyiv last Friday. He said that within the partnership Ukraine will be able to get priority access to certification of events held within the NATO-Ukraine thread. The program also foresees enhanced intelligence cooperation and that representatives of partner states may get an opportunity to be appointed to the NATO HQ or NATO bodies.

Ukraine is ready to join the NATO non-combat mission in Iraq, said Ukraine’s Defense Minister Andriy Zahorodnyuk. “It is about consulting and training the Armed Forces of Iraq to use the equipment that was possibly produced during the Soviet times or later and that our professionals know how to operate. (…) It is a non-combat mission taking place in the rear,” Zahorodnyuk said at the press conference in Kyiv last Friday. He said up to ten Ukrainians can join the mission to Iraq. The Minister added that negotiations on Ukraine’s participation in the mission are ongoing, the decision will come in the nearest time.

Meeting of the EU-Ukraine Association Council. The fifth meeting of the EU-Ukraine Association Councilscheduled for November 5 in Brussels is an important event set to accelerate the dynamics of relations with the European Union, said Vice Prime Minister Kuleba. Press service of the Ukrainian government anticipates that during the Council meeting the new Ukrainian authorities will set contacts with representatives of the European Commission. They will also discuss the ideas on further integration that will become the basis of the documents that the Council will endorse in December. “We have grounds to believe that the intensity of the EU-Ukraine dialogue will be only increasing,” said Kuleba as quoted by the government press service.

Investment and humanitarian fora in Mariupol 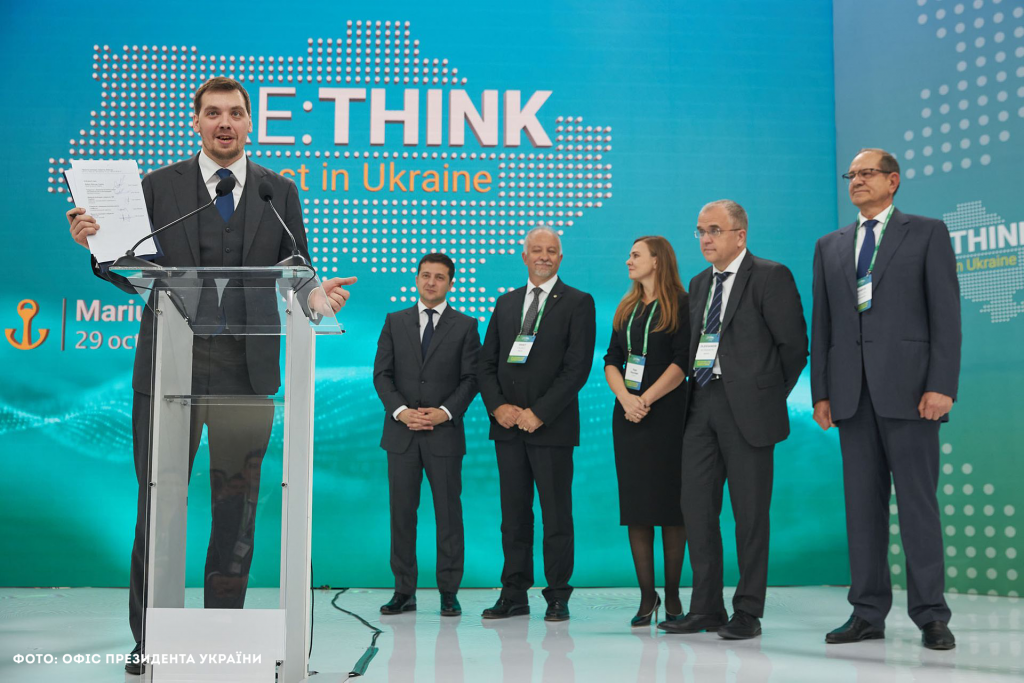 On October 29-30 two fora – investment and humanitarian were held in Mariupol, Donetsk region. Both events were kick-started at the initiative of President Zelenskyi and both concerned the discourse on the future of Donbas. The first forum targeted foreign businesses and partners. The second one discussed how to make the life of people in the east and in Crimea better and where reintegration of Donbas should begin.

It is the first large-scale official event looking into these topics taking place since the start of the Russian-Ukrainian war in the conflict zone besides. A field sitting of the Cabinet of Ministers also took place in Mariupol.

Hromadske made an extensive reportage on the spot. We herewith give the highlights.

The Forum was attended by nearly all members of the Cabinet of Ministers that earlier held a field sitting as well as by more than 20 foreign delegations. Participants included Director General for Enlargement at the European Commission Christian Danielsson; Vice President at the European Bank for Reconstruction and Development Alain Pilloux and World Bank Vice President Cyril Muller. It is the first forum taking place in the South of Ukraine, organized by Ukrainian authorities during the years of war.

As part of the event preparations the 230 km-long road from Zaporizhzhia was renovated. Mariupol did not have a proper location to host an event of a kind. The central square in front of the theatre was turned into the host site, technical supplies were brought from Kyiv, Zaporizhzhia and Dnipro.

Internet coverage. In Mariupol representatives of Ukraine’s four mobile operators signed a memorandum to fully cover the country with Internet. Mykhailo Fedorov, former head of digital in Zelenskyi’s team, Vice Prime Minister on digital transformation, reassures that the timeline for the changes varies from a year and a half to two years.

State-owned companies gone private.Minister of Economy Tymofiy Mylovanov presented the list of state-owned companies to be privatized. President Zelenskyi said together with the World Bank they are launching the International Partnership Support Fund for restoration and reintegration of Donbas. One of its first projects is improving the quality of potable water in Mariupol.

A billion euro memorandum with EBRD.Prime Minister Oleksiy Honcharuk and the government signed a memorandum with representatives of the European Bank for Reconstruction and Development worth of EUR one billion. EBRD will thus support construction of regional roads (the first tranche worth of EUR 300 million targets the roads of Kherson region) and preparation of “Ukrzaliznytsia” (Ukrainian Railways), one of the biggest state-run companies for IPO.

The case of Privatbank. Representatives of the IMF with whom Ukraine is currently negotiating on a new tranche were not in Mariupol. The Prime Minister expects that the mission will come to Ukraine in a few weeks, while the program of assistance will be approved by the end of the year.

The case of Privatbank is key to the IMF and to investors as well, emphasized British financial analyst Timothy Ash.

During his address EBRD Vice President Alain Pilloux mentioned that the problem is not the possible denationalization of Privatbank, there are actually no grounds to worry about that. The question is why the authorities have not demanded that Ihor Kolomoyskyi reimburses the USD 5,5 billion transferred from the bank.

On October 30, the next day after the investment forum the Unity Forum was held in Mariupol. It was several times smaller in size but its participants hardly fit into a recently constructed Center for provision of administrative services, the second one in the city. The forum focused on humanitarian problems of Ukrainians whose life is affected by the war.

In his keynote address in Mariupol President Zelenskyi emphasized the need to draft a concept of transitional justice. It includes drafting legislation that regulates responsibility over the conflict, reimbursement of damages, exchange of prisoners, regularizing the “documents” issued in occupied territories. One of the two panel discussions was dedicated to the above issues.

– ending the “hot phase” (there is no military solution, the pressure of sanctions on Russia needs to continued until it implements its international commitments);

– reconciliation of people, making the “wounds heal” (with wide engagement of civil society, as “no one in the country has had this experience before and thus cannot say that their opinion is the only correct one”);

Key is to agree on the joint vision of peace based on the values of “freedom, democracy, civil society, rule of law state, dignified life, kindness, tolerance, integrity, respect of the law, private property and respect for each other.”

Sentsov’s address. Forum organizers – the Office on humanitarian policy of Ukraine planned interventions by opinion leaders speaking on what unites Ukraine as the program’s key point.

Film director and former Kremlin’s hostage Oleg Sentsov was one of the speakers. His messageis short – besides the Russian authorities and corruption the problem “is us”. He recalled Maidan: “I remember very well how it was back then in winter when we would talk to each other politely, with respect, openly and honestly. It used to help me through all the five years. I knew what for I was putting everything at risk in Crimea and what for I am jailed. Being back I saw that, to my great sorrow, we lost it all. (…) The Revolution of Dignity turned into the counterrevolution of hatred. We are very aggressive towards each other, separated, intolerant to any thought that is different.”

The Kremlin continuously denies any involvement in the Brexit despite the fact it directly benefits Russia, since it weakens the geopolitical unity and strength of European countries and Russian media often underline this vulnerability as part of their “decaying Europe” narrative. Hybrid Warfare Analytical Group prepared a video on the subject.

How Russian orthodox church becomes an instrument of hybrid warfare

A recent restart of a “Kyivan Rus” channel on cable should be watched closely for possible hidden — and important — implications. Before it fell silent for nearly 10 years, the channel was linked to Hennadiy Vasyliev, Prosecutor General in 2003–2004, 5 times elected as an MP with his last term as a representative of the pro-Russian “Party of Regions” that dominated Ukrainian politics since 2010 and until the Revolution of Dignity. He served as a Deputy Head of Presidential Administration in 2010–2011 under ex-President V.Yanukovych — and was also a benefactor of the Russian Orthodox Church (ROC).

“Kyivan Rus”, founded in Donetsk in 2003 and positioning itself as a family-oriented channel, heavily promoted Orthodoxy and exported “traditional values” in their ROC interpretation.

The curious case of Janus Putkonen.  How propaganda abroad becomes a threat at home

In addition to governmental news agencies such as RT and Sputnik, Russian government tries to attract foreign journalists who would convey the pro-Kremlin messages to give them more credibility. One of the most exemplary cases is represented by the activities of Janus Putkonen, who moved from Finland to the occupied city of Donetsk and, later, to Luhansk, and became heavily involved in spreading multilingual disinformation on behalf of Moscow.