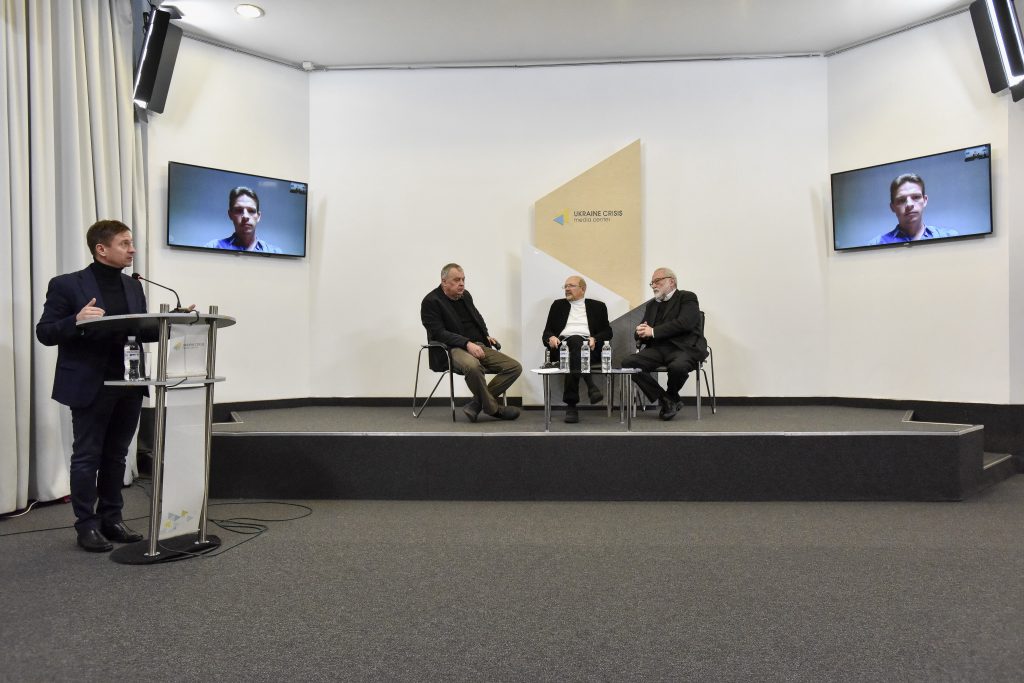 On November 21 the Anti-Defamation League (ADL) presented a survey on anti-Semitism conducted in 18 countries including Ukraine. The poll found that one in four respondents harbor clearly anti-Semitic attitudes and that in Eastern Europe hateful notions about Jews are rising compared to the previous edition of the “ADL Global 100: An Index of Anti-Semitism”. Thus, 72 per cent of respondents in Ukraine said the statement “Jews have too much power in the business world” was probably true. The Index ranked Ukraine second with the score of 46 per cent, first was ranked Poland with the index score of 48 per cent, third is Hungary with the 42 per cent score.

The survey results did not quite convince us at UCMC, not least because in spring 2019 73 per cent of Ukrainians cast their votes for a Jewish President. We organized a discussion inviting experts, human rights defenders researching anti-Semitism as well as sociologists who would professionally assess the methodology of the survey. We herewith quote main arguments voiced during the discussion.

During the discussion at Ukraine Crisis Media Center we asked human rights watchdogs and sociologists: are there grounds to consider that the anti-Semitic sentiment in Ukraine is rising?

Participants immediately quoted other surveys. Thus, a survey presented by the Congress of Ethnic Communities of Ukraine in 2019 demonstrates that in 2018 the situation with anti-Semitic hate crimes improved: incidents of anti-Semitic vandalism declined twofold and no attacks were recorded.

A research by the US-based Pew Research Center released in 2018 demonstrates that the attitude of Ukrainians toward Jews is most friendly among that of the respondents in all countries polled. Only five per cent of Ukrainians would not want to see Jews as their fellow citizens. It is the lowest figure recorded in Eastern and Central Europe.

What has gone wrong with the ADL’s methodology?

Outdated and imprecise methodology. “We have already criticized the Anti-Defamation League a number of times for the outdated methodology they use. (…) Should I answer these questions, I would also turn to be an anti-Semite,” said Josef Zissels, dissident, human rights defender, executive co-president of the Association of Jewish Organizations and Communities of Ukraine, executive vice president of the Congress of National Communities of Ukraine.

Firstly, the questions are formulated in such a way that a “yes” answer would not necessarily signal a negative attitude to Jews. Secondly, one and the same methodology is applied to all countries polled without being adapted to local peculiarities of respondents’ perception of these questions, Zissels emphasized.

“Out of the total 11 statements of the survey, I would question seven, how indicative they are of antisemitism and if they can be perceived as negative characteristics of Jews. While the methodology suggests that if a person responds positively to six statements, they are categorized as anti-Semites.”

“Considerable part of the statements presented in the survey concerns universal drawbacks, for example, the statement ‘Jews don’t care what happens to anyone but their own kind’. When the respondent is asked if they agree with the statement, they step into uncertainty. On the one hand, representatives of all nationalities tend to think more of the problems of their national community rather than of the problems of others. On the other hand, they think: why are they being asked about Jews in this case? When we are measuring the attitude to such stereotypical judgements, we are not measuring the respondent’s position so much as their idea of what can and cannot be said in such situation.”

“Let’s take the statement ‘Jews have too much power in the business world’ that was dubbed as probably true in Ukraine. If we reformulated the statement into: ‘some Ukrainians have…’, the majority of respondents would most likely agree with it as well. If xenophobia exists in Ukraine, it is towards the oligarchs in the first place. Our opinion polls are constantly showing that people who are highly influential in business are in the group that has the most negative attitude by Ukrainians, and that’s also where their nationality does not make a considerable difference,” commented Mykhailo Mishchenko, deputy director of the sociological service of the Razumkov Center.

Data by Ukrainian sociologists contradicts the survey’s results. “What is being researched in Ukraine since 1994 is based on the adapted Bogardus scale and rather concerns emotional components of the attitude toward Jews. For example, if one would be willing to accept them as family members, neighbors or work colleagues. Our Institute – the Institute of Sociology of the National Academy of Sciences of Ukraine, is holding these opinion polls once in two years.”

“Over the last 10 years the situation is more or less stable. On average the Jews are ranked fifth. It is more or less the same level of attitude that is also being demonstrated to Russians, Crimean Tatars and Americans. Attitude to Jews who are Ukraine citizens is better than to Jews – residents of Israel. As to Roma, the problem of the negative attitude truly exists,” said Volodymyr Paniotto, director general of the Kyiv International Institute of Sociology.

The method’s margins of error. Volodymyr Paniotto, director general of the Kyiv International Institute of Sociology emphasized that ADL’s Index has a big margin of error. With the sample of 500 respondents and in the view of the design effect, the margin of error constitutes about seven per cent. Moreover the survey has fewer questions than a standard opinion poll. The Index also turned to be unstable. For example, in 2014 France had the index score of 37 per cent, in 2015 – 17 per cent. The situation could not change so drastically in one year.

In 2014 based on the ADL’s survey Ukraine had the index score of 38 per cent, in 2015 – 31 per cent, in 2019 – 46 per cent. In 2019 Ukraine was ranked second after Poland also due to the fact that the survey was not conducted in the countries that had higher index scores in previous surveys including Greece, Bulgaria, Serbia, Belarus and Romania.

Sociologists note that the cognitive aspect (convictions) that polled people mention do not always coincide with the behavioral aspect – how they act in real life.

“Data of 2018 shows that 36 per cent of Ukrainians are in theory ready to vote for a President of Jewish origin. While at the recent elections 73 per cent did cast their votes,” said Volodymyr Paniotto of the Kyiv International Institute of Sociology.

What the situation with anti-Semitic incidents is like in Ukraine?

Zero physical attacks were recorded over the last three years as well as the lowest number of acts of vandalism over the last few decades.

“Over the last three years not a single anti-Semitic physical attack happened in Ukraine. To compare, in Western Europe – in Germany, France and the UK, as well as in the US such attacks number dozens per year. In 2017 there were 24 acts of anti-Semitic vandalism, in 2018 – 12. The incident with the monument to Sholem Aleichem is 11thin 2019 in entire Ukraine. It is the minimum level recorded over the past two-three decades – as long as we’ve been dealing with it. Same concerns hate speech,” said Josef Zissels, dissident, human rights defender, executive co-president of the Association of Jewish Organizations and Communities of Ukraine, executive vice president of the Congress of National Communities of Ukraine.

“After Maidan the attitude to Jews and Crimean Tatars drastically improved – as they were active on Maidan and went to fight to the frontline. Jews demonstrated that they identify themselves with the Ukrainian state, its future and the challenges it is facing and that they are ready to assume the responsibility that they own. The attitude towards them surely reflects it, it is also what the survey by the Kyiv International Institute of Sociology has captured,” Zissels added.

Vyacheslav Likhachov, human rights defender, analyst at the Human Rights Center “Zmina” shares the same opinion: “Highest level of anti-Semitic crimes and acts of vandalism was recorded in Ukraine between 2006 and 2008. Over the last ten years we have been witnessing these numbers decreasing. We are observing the trend not only in Ukraine but also in other Eastern European states as well, for example, in Poland that in ADL’s survey also scored a high anti-Semitic index in contrast to Western European states which the ADL’s survey assigned a lower score index. One may state that the survey is not actually a survey on anti-Semitism level as it does not reflect what actually happens within a society,” said Likhachov. “Taking Ukraine for a country with high anti-Semitic attitudes is an outdated viewpoint that has nothing to do with reality. Ukraine is a country that has the lowest number of anti-Semitic incidents in Europe and globally,” the human rights defender concluded.